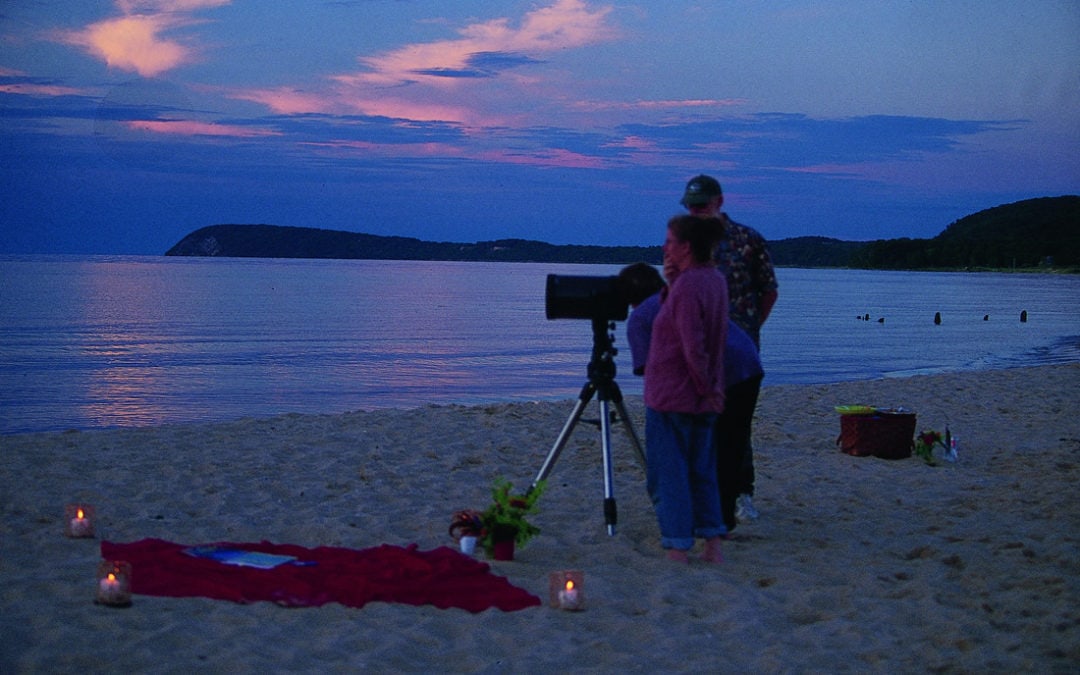 A summer night’s sky has plenty of wonders to look at (have you ever seen the green flash!?), and you don’t need a telescope to see many of them. Just head to your favorite beach and let the skywatching begin.

This piece was featured in June 1992 in the feature “Summer Skywatching.”

One of the many delights of living in Northern Michigan is the lack of big cities with bright lights to obscure the heavens. City dwellers who come north on vacation are often awed by the sight of the Milky Way, with its uncountable millions of stars—a spectacular sight we northerners sometimes take for granted.

No matter what they told you at summer camp, you don’t have to memorize a hundred constellations to find your way around the summer sky. (Actually, it’s the same sky all year. All stars are up there all the time; they just rise and set at different times as the year progresses. So, what “the summer sky” means is really only “the summer night sky.”)

To find your way in the sky all you need are a few landmarks. Start by finding the Big Dipper, which is high in the sky in summer and is probably the best known of the constellations because it looks just like its name and is so easy to find. The two stars at the “dipper” end, point to Polaris, the north star, which you’ll find, predictably enough, in the north—about halfway between the northern horizon and the spot directly over your head.

Polaris is a key celestial “landmark” because it is directly above the North Pole. (Well, that’s a lie; it isn’t directly over the pole, but it’s so close it makes no difference for us.)

Now, here’s a little practical, celestial navigation for you: No matter where you are in the northern hemisphere, you can measure your latitude by measuring the angle of Polaris above the horizon. At the Equator—zero degrees north latitude—the North Star is right on the horizon—zero degrees up. Were Polaris directly overhead—90 degrees up—you would know you were at 90 degrees north latitude, which is the North Pole.

If you were standing at the very tip of Old Mission Peninsula, the pole star would be 45 degrees above the northern horizon. This would tell you something most Northern Michiganders know anyway: that you’re on the 45th parallel, halfway between Equator and pole. And it would be just as true in Bordeaux, France, as in Leland or Elk Rapids.

One of the things a sextant does for sailors is let them measure quite accurately how far above the horizon a given star is. Know that, and it’s only a hop and a jump to knowing your latitude. And your latitude is exactly half of what you need to know to fix your position precisely anywhere on Earth. Unfortunately, the other thing you need to know is longitude, which is somewhat more difficult. It requires a very accurate clock, and a bit more math than you probably want to do on the beach after grilling burgers and washing them down with a couple of beers.

Since it’s almost over the pole, the north star appears almost stationary in the sky, and all the other stars seem to revolve around it. (Actually, the stars stay still; it’s Earth that turns.) The stars don’t appear to move terribly fast, but every 24 hours each one makes a complete circle in the sky. If you have a camera that lets you make time exposures, set it up some very dark night, aim it at the north star and open the shutter for an hour or so. What you’ll get is a negative with hundreds of concentric arcs on it, thick lines for bright stars, thin ones for dim stars. The tiny arc in the center made by the north star will be so small it will probably appear to be a mere dot or smear.

Here’s some tough stuff for those of you who only had one beer with those burgers: You could easily see from that photo you made that some stars never “set” below the horizon but merely circle high in the sky. At our latitude, any star that is within 45 degrees of the pole star is always in the sky, day and night. A bright star called “Capella,” which is about 45 degrees from the north star, swings low enough once a day to just touch the horizon, and 12 hours later passes just about directly overhead. Now, for those of you who washed those burgers down with water, here’s a pop quiz: If you were standing on the beach on the 45th parallel in the southern hemisphere—in, say, New Zealand—would you ever see Capella?

Enough math. Let’s have fun. Take a warm blanket and go sit on the beach and watch the sunset on one of those trademark northern evenings when its crisp and cold and so clear you can see forever.

If you are very, very lucky and watch very, very closely and the air is very, very clear and still, you might see something called the “green flash” the instant the last tiny slice of sun dips below the horizon.

Actually, you’ll be seeing the sun a few moments after it actually sets, because the atmosphere bends its rays around the Earth’s curvature. At the final moment, the atmosphere and horizon also act like a giant prism, breaking the sun’s light up into the colors of the rainbow as they cross the knife-edge of the horizon. Now think about the spectrum, which you surely remember from fourth grade as Roy G. Biv—for red, orange, yellow, green, blue, indigo and violet. The blue, indigo and violet are so similar to the sky you won’t see them. That leaves green as the last clearly visible color in the spectrum as the sun sets. And if conditions are just right, the green appears as a brilliant, instantaneous flash.

Read Next: Michigan’s Dark Sky Preserves are the Best Spots to Stargaze

It only works over water in very still air, because there must be a very clean, unbroken horizon line. On land, hills and trees hopelessly mess up the horizon. Even on the water, the slightest breeze means wavelets that do the same. And to tell the honest truth, your best bet for seeing it is to go to the tropics, because the sun sets at a much steeper angle there, which enhances the effect.

A word of caution here that’s probably not necessary, but which we’ll include: NEVER look straight at the sun at any time other than sunrise or sunset. It’s not only dangerous, but it’s also dumb. You know that. But maybe the kids don’t know, so be sure to tell them. 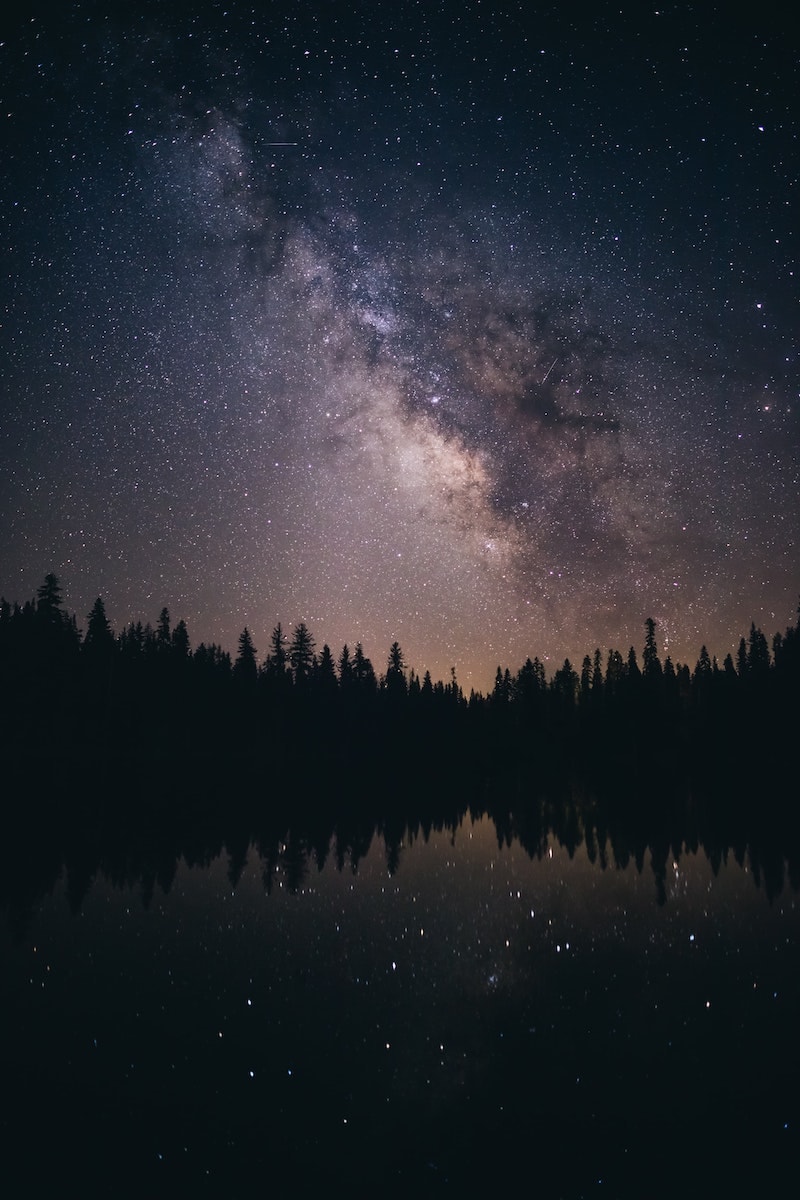 Not everything in the sky that looks like a star is one. Some of those bright dots are planets. You knew that, too. But you might not know which is which. Planets are harder to figure, because they move around a lot, and sometimes move against the grain of everything else in the sky.

The most spectacular planets, naked-eye-wise, are Venus, Mercury and Jupiter. Venus and Mercury, of course, are nearer the sun than we are, and they are often so near the sun that it simply overpowers them into invisibility. But when they come out from behind the sun, they can be brilliant indeed. Venus is so bright, it is sometimes visible by day.

You can also sometimes see Jupiter. How can you tell which one it is? Get out your binoculars and look. Jupiter is the one with four moons. Actually, Jupiter has 17 moons, of which 14 are visible through Earth-bound telescopes. The four you can see through good binoculars appear as little starry dots to the right or left of Jupiter. They orbit very rapidly, so their positions change from night to night—a phenomenon which is fascinating all by itself. These four brightest moons of Jupiter are called the “Galilean” moons because they are the ones Galileo discovered almost as soon as he had invented the telescope.

Saturn is possibly the most interesting planet because it has those famous rings. But you’ll not likely see them without a telescope. Saturn is bright, too, and like Jupiter, very distant, so it seems to move slowly through the sky.

Why are planets called planets? Because they seem to move backward in the sky at times. “Planets” comes from the Greek word for “wanderer.”

The best time to see all these things is when the sky’s nice and dark. In Northern Michigan, that means staying up pretty late because of the long summer twilight. The deep blackness of night doesn’t descend until nearly midnight in late June. The longer and darker the night, the better your chances of seeing anything in the night sky.

That brings us to the moon. Everything else in the sky is much harder to see when the moon’s up, and almost impossible to see by the light of the full moon. Don’t plan any serious skywatching near those full-moon nights unless what you want to watch is the moon. Actually, the best time for moonwatching is when it’s less than full, so the sun hits it from the side, and surface features cast shadows that make them more visible.

The best time to skywatch for other stuff (stars and planets) is on nights when the moon rises after midnight or sets before the end of twilight. It’s an easy rule of thumb that when the moon’s high by day, it’ll be a good night for stargazing.

Every once in awhile, we get a meteor shower, when the Earth passes through the remains of an old comet. The best of the annual meteor showers is the Perseid shower. It peaks August 11–13, depending on the year. The second brightest meteor shower is the Leonids in November.

When is the best time to see meteors? On any given summer night, if you look skyward long enough, you’ll probably see a few bright meteors an hour. The best time is after midnight though, when our side of the planet is facing “forward” in orbit, and the celestial debris that burns up to produce meteors is colliding with us head-on instead of overtaking us.

You can see hundreds of galaxies too, but most are so distant you see them as mere points of light and don’t realize they’re not just stars. But if you’ve ever looked up and seen the dusty, diamond path of the Milky Way strewn across the heavens, you’ve seen part of the galaxy we call home.

Another entire galaxy is available for the seeing, as well. It’s the Andromeda Galaxy, a mammoth spiral, not unlike our own Milky Way, containing billions of stars. To see it with anything less than a powerful telescope, however, you have to have very good binoculars and very good eyesight, as well as that clarity of sky astronomers call good “seeing.” And don’t expect to see individual stars. At best, given all those conditions, you’ll see a hazy, glowing patch of sky about the size of half the moon.

To find it, you first want to find Cassiopeia, an obvious W-shaped constellation across the pole star from the Big Dipper. The larger point of the W aims at the area where you’ll find the Andromeda galaxy, in a dark area of sky about half as far from the W as the W is from the north star. Don’t be disappointed if you don’t find it. It’s a tough one!