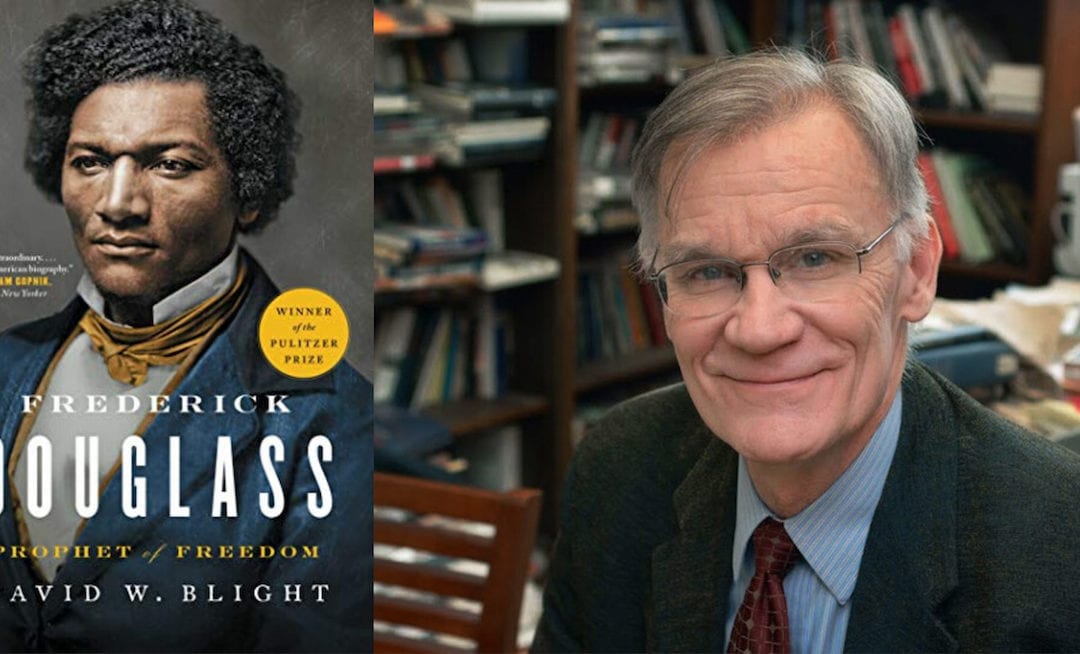 David Blight laughs when asked about Frederick Douglass at a Black Lives Matter protest—but readily agrees he’d be right there. “The idea is that Black Lives Matter is just another way of saying what the abolition movement was trying to say,” says Blight, author of the Pulitzer Prize-winning biography Frederick Douglass: Prophet of Freedom. Blight will join Traverse City’s virtual National Writers Series event on July 5 at 7 p.m.

“Douglass had a deep and long view of history. He knew nothing could change overnight,” Blight says. He says Douglass would have been fascinated by the civil rights movement. “If we mean the appeal for understanding and recognition of Black humanity, integrity, dignity and including Blacks in every conceivable way in natural rights and equality, yeah, that’s Douglass’ life.” And Blight thinks we could be on the cusp of a new kind of civil rights movement, one that involves policing, health care and equality. “It depends on what we do with the politics,” he says.

Changing the political landscape can feel daunting, Blight admits, but the first step is eliminating barriers to voting. “We’ve got to stop Republican voter suppression,” he says. “We have to make it easy to vote.” He suggests making Election Day a federal holiday or holding elections on Sundays. “It would truly change who governs, thus changing politics.”

Blight, who is a Sterling Professor of American History at Yale University and director of the Gilder Lehrman Center for the Study of Slavery, Resistance and Abolition, also at Yale, grew up in Flint. His interest in history was ignited by reading books by Benzie County author Bruce Catton. “I started reading Bruce Catton when I was about 15. I don’t even remember who gave me the first book, but I couldn’t put it down. His narrative was utterly compelling to me. Catton is the first historian I knowingly remember reading. Just a classic narrative writer. He had more readers than just about anybody about the American Civil War.”

His fascination with history continued in high school (Flint Central) and he also credits his parents. “We didn’t go Up North for vacation,” he says. Instead, he convinced his parents to go east to explore historical landmarks. “I knew the geography and landscape of Civil War states better than I knew the geography of Michigan,” Blight laughs. Neither of his parents went to college but were determined their two sons get a quality education. David Blight’s brother, James Blight, is a professor of international relations at Brown University’s Watson Institute for International Studies, an author and a film producer.

At Michigan State, Blight took a course in African American history that was “revelatory.” The professor was Leslie Rout, who was an African American but his history specialty was Brazil. Blight says he didn’t learn much in high school about slavery and the college course opened his eyes. He went on to teach high school history (Flint Northern) while simultaneously earning for his master’s at MSU.

As for high school curricula, Blight has been working to improve it for years. For two decades, he’s been leading a summer institute for history teachers that includes slavery, the Civil War and the life and writings of Frederick Douglass. “We really have changed the curriculum to a great extent,” he says. “But that doesn’t mean everyone’s learning. Millions of Americans can choose to remain ignorant.”

Frederick Douglass: Prophet of Freedom has been optioned by Barack and Michele Obama’s film company, Higher Ground. The screenwriter is Kevin Willmott (co-winner of the 2018 Academy Award for Best Adapted Screenplay for BlacKkKlansman) and Blight is working closely with him. There’s no production schedule yet.

It’s not the first time Blight and Douglass have intersected with Obama. “In 2008, in Obama’s first election I carried a copy of Douglass’ first narrative into the voting booth.” Blight says he loves imagining Douglass’ reaction to America’s first Black president.

He also has a few questions he’d like to ask Douglass, some personal, some political. On the personal side, “Mr. Douglass, your first wife Anna. Explain.” Blight is mystified by their marriage, which lasted 44 years. He develops Anna’s life more than others have been able to in Prophet of Freedom, but it wasn’t easy. She wasn’t literate, so there are no writings to refer to. “It was an extremely important relationship (but) one of the aspects of his life that’s most difficult to explain.”

On the other question, he’d like to ask Frederick Douglass how he came to master words and language so well, a question that can be thrown right back at Blight, whose almost-900-page book reads like thriller fiction.

“My inspiration as a writer came in grad school,” he says, “but there were two high school teachers in Flint who are important in how I became interested in history.” One taught Western Civilization, which continues to fascinate Blight. The other taught American history and stressed causes and consequences. What happened after the Industrial Revolution? Why did the Civil War happen? “They cultivated in me a deeper interest than I was already cultivating.”

The genesis of Prophet of Freedom was the discovery of a treasure trove of papers, letters and documents owned by Walter Evans in Savannah, Georgia. Blight was in town for a talk when someone mentioned Evans wanted to meet him. That collection will now be housed at Yale. Evans “adores” the book, Blight says, “although he became a little frustrated with me.” The first meeting the pair had was 13 years ago; it took Blight about 10 years to write Prophet of Freedom.

Blight has been a regular on the op-ed pages recently, including one article in The Atlantic proposing a March on Washington in August. He thinks that might be happening, but he is quite supportive of the local marches, which is where he thinks most change can begin. Asked what sign he thinks Frederick Douglass would carry at a protest, Blight can think of several options, ranging from “I can’t believe I’m still protesting this s%^&” to “I left the world in 1895 and you’re still doing this?” to his favorite, a Frederick Douglass quote, which he already has on a T-shirt: “Heaven lends me ability, to use my voice, my pen or my vote.”

Find your voice, your pen and your vote, Blight encourages.