Northern Michigan’s Past: Hop Aboard the Dummy Express 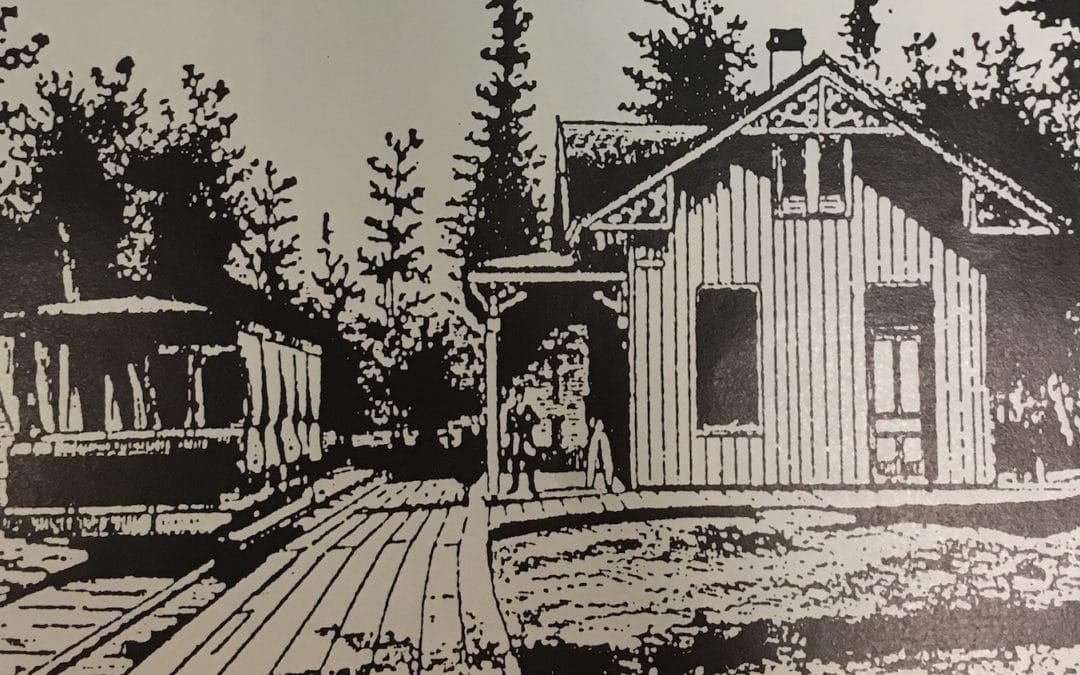 If you were traveling between Petoskey and Harbor Springs during a characteristic, turn-of-the-century summer, chances are that you let a dummy lead the way. Not a Charlie McCarthy-Mortimer Snerd type character, mind you—but a commuter train, called a dummy, which linked these resort communities.

This piece was featured in June 1986 in the department “A Note From Our Past.”

During the peak of the summer season, as many as two dozen dummies could be spotted every day as they trekked their way along the picturesque shores of Little Traverse Bay. The locomotives made the approximately 25-minute long, 15-cent run for nearly 40 years.

The enterprise began in the 1870s when the Grand Rapids and Indiana Railroad (GR & I) joined forces with the Methodist State Campground Association (MSCA) to build a line and establish rail service between the Bay View Campground and Petoskey. The GR & I agreed to provide one engine, one rail car and frequent service. The MSCA agreed to build a retreat on the Bay View property and hold their annual meetings there for the next 15 years. Their respective goals: to make money and save souls.

The GR & I adopted a catchy slogan, “The Fishing Line,” to lure the vacation traffic, and by 1898, 15 commuter trips were made each day along the dummy line. Trains started running in Petoskey at 6:30 a.m., with the final train departing at 10:30 p.m. The early bird in Harbor Springs left at 7 a.m. and the last train departed at 11 p.m. Train #124, undoubtedly a speedster, made the trip in a record 20 minutes.

The dummies had their own depot in Petoskey. It was located on the north side of Lake Street between the old Elks Club and the through tracks, not far from the old Occidental Hotel. The one-story, white frame depot had a tower on the partially enclosed east end and the west end housed the ticket offices and restrooms. Open arches gave the entrances and exits from Lake Street to the two spur tracks ending at the station and to the one through track running west, which the dummy used between Oden and Walloon Lake. Two wooden platforms, later replaced by cement ones, accommodated the thousands of passengers who passed through each summer. During the winter the dummy service went into hibernation and the station was closed.

Travel wasn’t limited to the Petoskey-Harbor Springs run. Long forgotten timetables show the GR & I scheduling seven trips daily to Oden, seven miles to the north, and five daily trips south to Walloon Lake. Both of these trips wound up at steamboat landings. At Oden the steamer “Topinabee” waited to carry passengers across the inland waterway to Topinabee, on Mullet Lake. There a lunch stop was made at Pike’s Summer Tavern. Passengers could then return to Oden and board a commuter train for Petoskey. Others, going to Cheboygan, boarded the steamboat “Onakama.”

Walloon Lake was at the end of a GR & I branch that left the main line at Clarion. There travelers could board a small steamboat that made a circuit of the lake, picking up and debarking resorters at any of the 19 hotels and boarding houses which catered to summer visitors.

Not to be left out, the Pere Marquette Railroad offered dummy service out of Petoskey and Bay View to Charlevoix and Belvedere. This line followed the shore of Lake Michigan the 18 miles to Charlevoix.

But the era was destined to come to a close. As more and more people brought their autos from home, the dummy trains ceased to be a necessity. Services were down to one trip per day by 1921, and by 1925, private automobiles forced the dummies into extinction.

Thomas W. Bradley was a part-time freelancer for Traverse