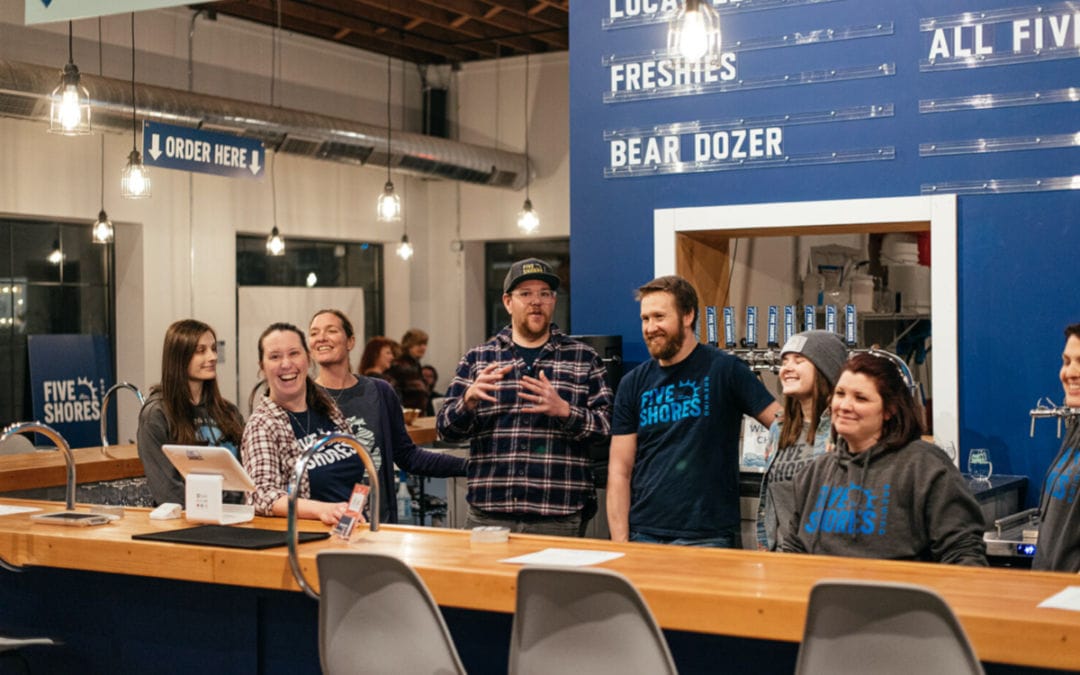 For many, craft beer is a big part of what makes Northern Michigan so special. For business partners Oliver Roberts and Matt Demorest, who both hail from Ann Arbor, their shared love of craft beer transitioned from a mutually shared interest into a passion and entrepreneurial drive, leading them to co-found Beulah’s newest brewery, Five Shores Brewing. 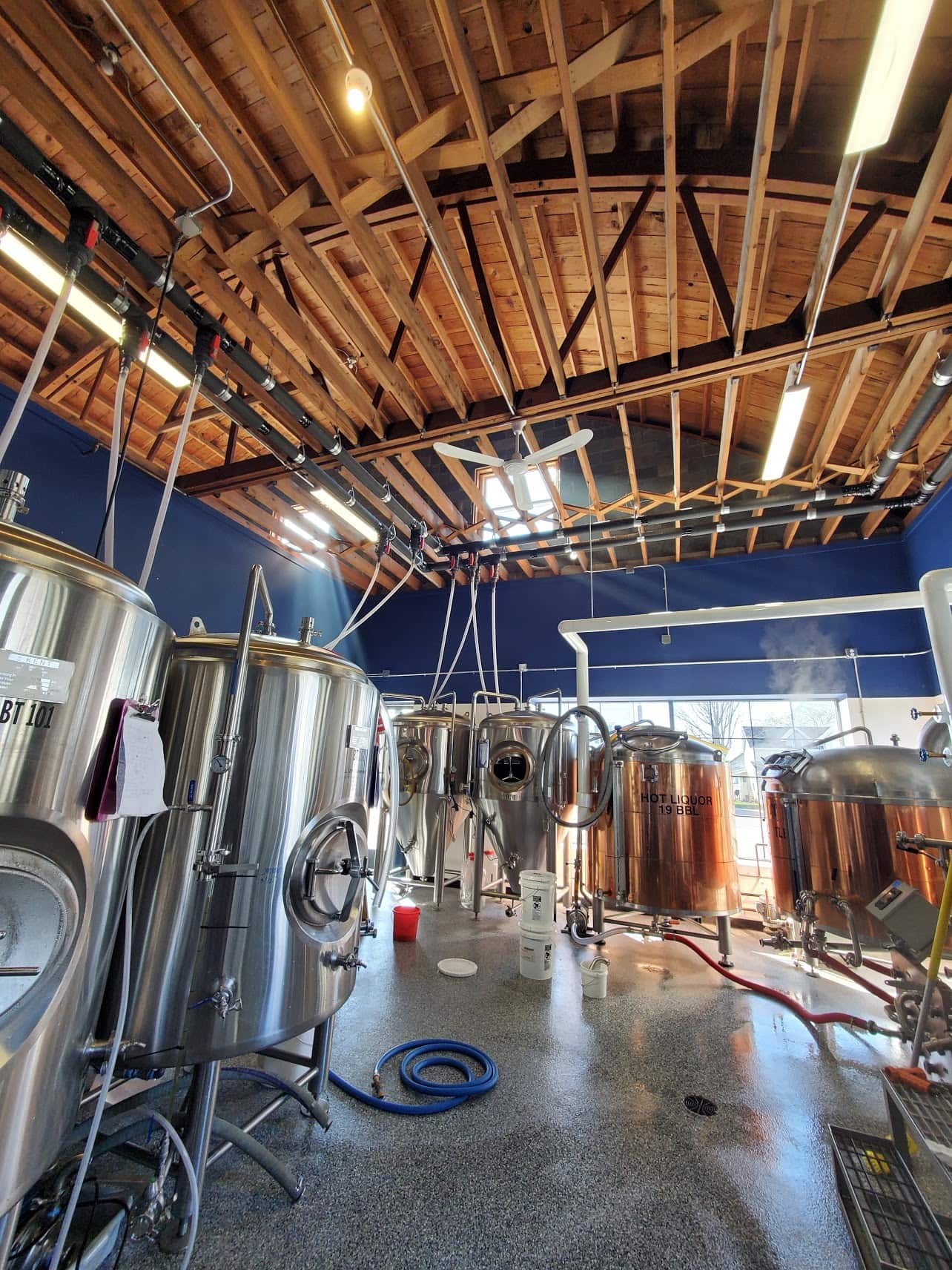 A fresh face to the industry, Five Shores Brewing opened to the public on January 24, 2020. The newly renovated taproom appeals to modern tastes with high ceilings, big windows and a confident color scheme that feels like Up North with comfortable, rustic charm.

Not only does Five Shores brew beer, but they also offer ciders, wines and cocktails. As for its brewing methods, Five Shores produces several varieties of beer including IPAs, lagers and wheat ales.

“Beer is just like cooking, layering flavors using different ingredients and paying close attention to temperature and time,” Oliver says. “I don’t really make beer, the yeast makes the beer, I simply give the yeast what I think it wants, and usually it gives me back what I want in specific flavors and a unique drinking experience.” 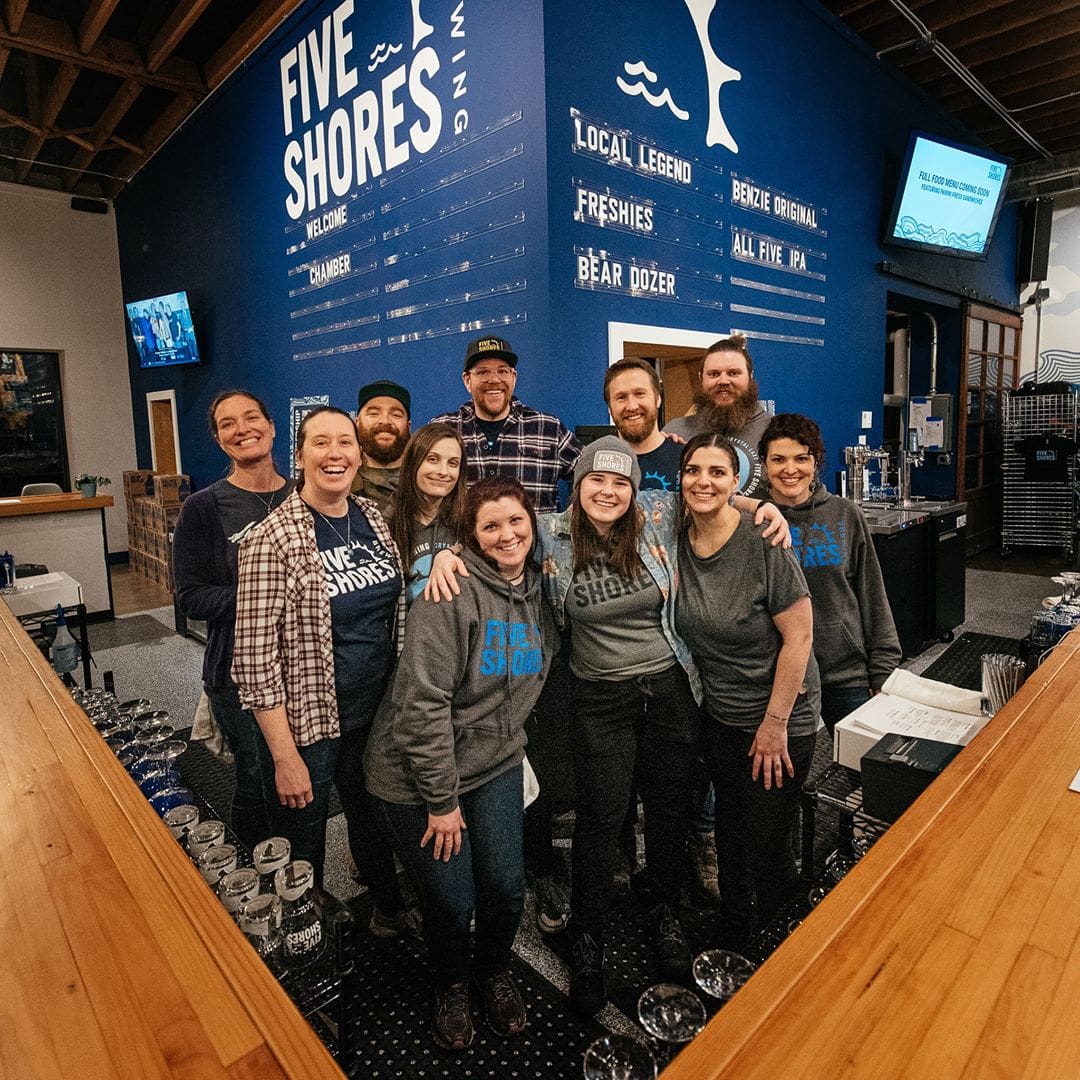 Five Shores offers customers fun deals and take-home options for their beer, including a growler service, beer punch-cards and coupons for when the taproom reopened after the COVID-19 shutdown. During COVID-19, Five Shores has offered extra specials to customers who have helped support them such as a Penny Beer Club and first-dibs on the brewery’s to-be-released barrel-aged stout series called “Hibernated.” Now that the brewery has reopened, customers can visit the brewery at 163 Benzie Blvd. Check their website for safety updates. 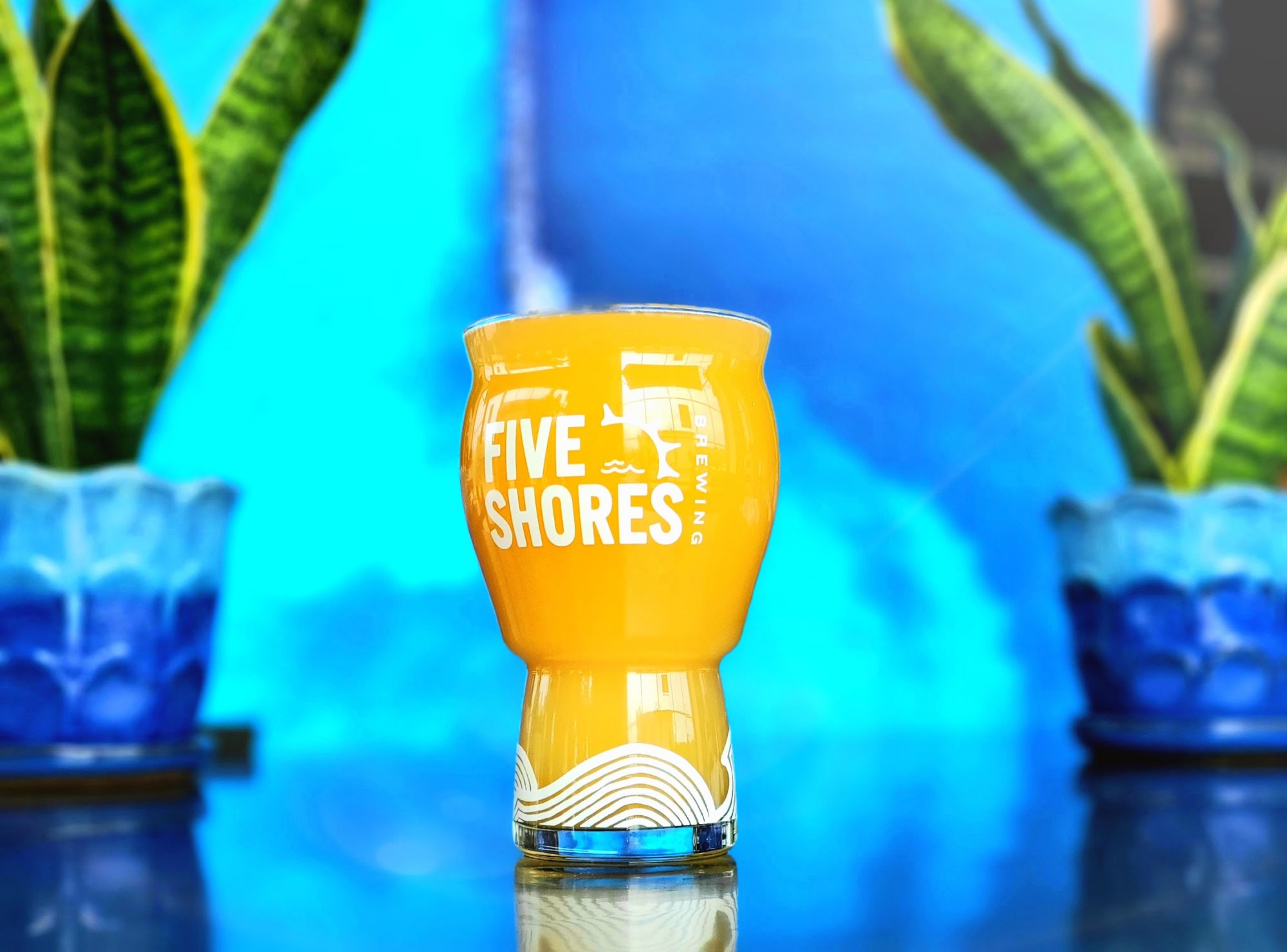 The company’s focus on aesthetic appeal and simplicity yield both delicious and diverse beers, but also an image and style that are hard to beat. Opening just before the height of the COVID-19 pandemic presented Matt and Oliver with new challenges, and the main focus of theirs is how to begin giving back to the community and customers who have helped them stay in business.

The company has had to put some planned building projects on hold like the renovation of their beer garden, but they hope to be able to resume the project in the near future. Oliver says he has plenty more plans for new beers on deck, too.

“When we discovered Benzie County and Beulah, everyone was so kind and supportive of what we were doing and we never felt like outsiders, so from the beginning we’ve brainstormed ideas on how to give back,” Oliver says. “Beer wise, we want to keep breathing new life into a now normalized industry, craft beer that is. We also know that Benzie County is a truly inspiring area and that to us, is almost like a best-kept secret, and we want to bring more people to see what we see, a place to appreciate, unwind and get away from the grind.”

Whether you’ve just come from a bike ride on the Betsie Valley Trail or a day at one of Beulah’s stunning beaches on Crystal Lake, making a stop at Five Shores Brewing is indeed a perfect way to spend an evening enjoying the magic of Northern Michigan. 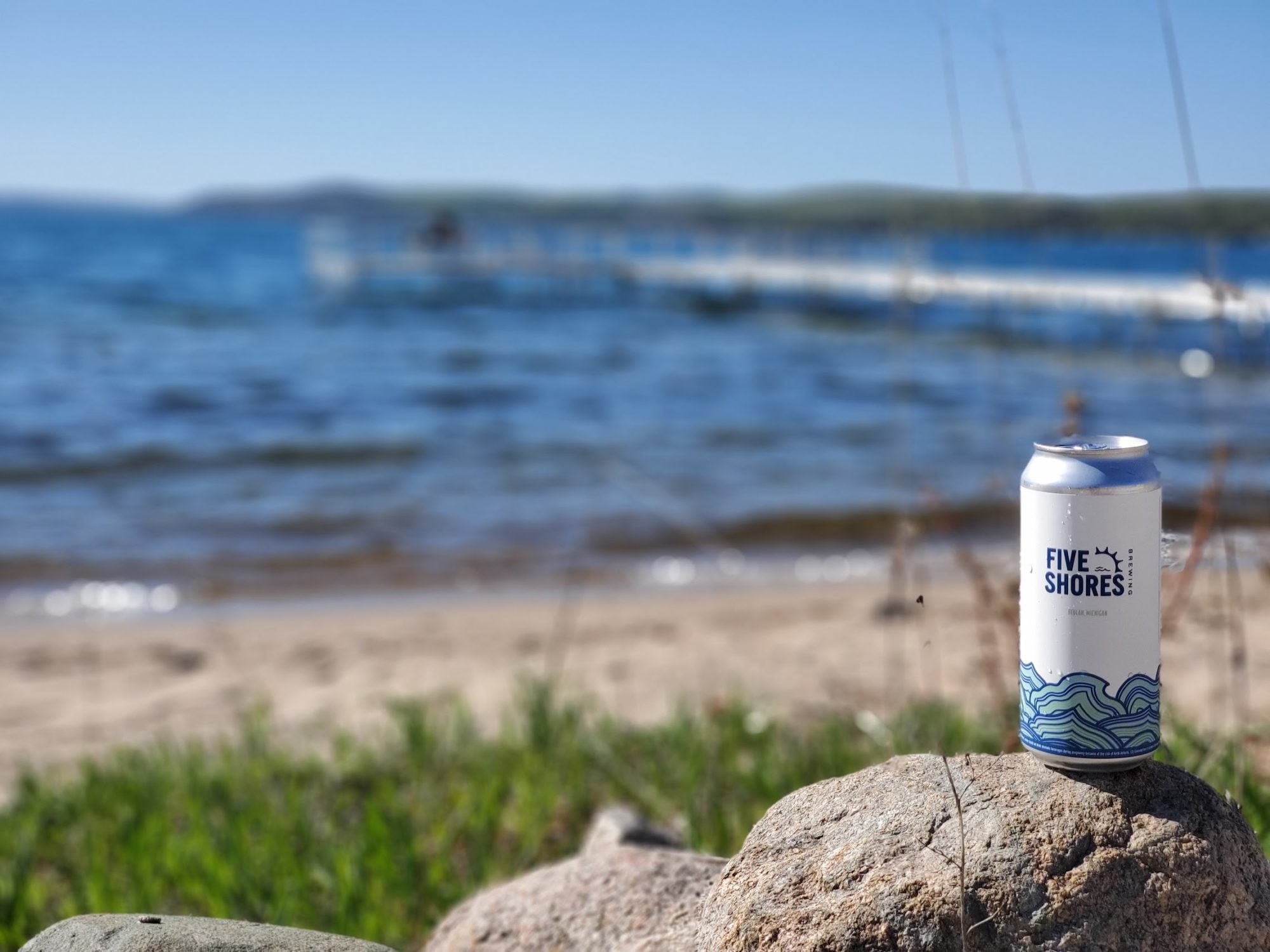 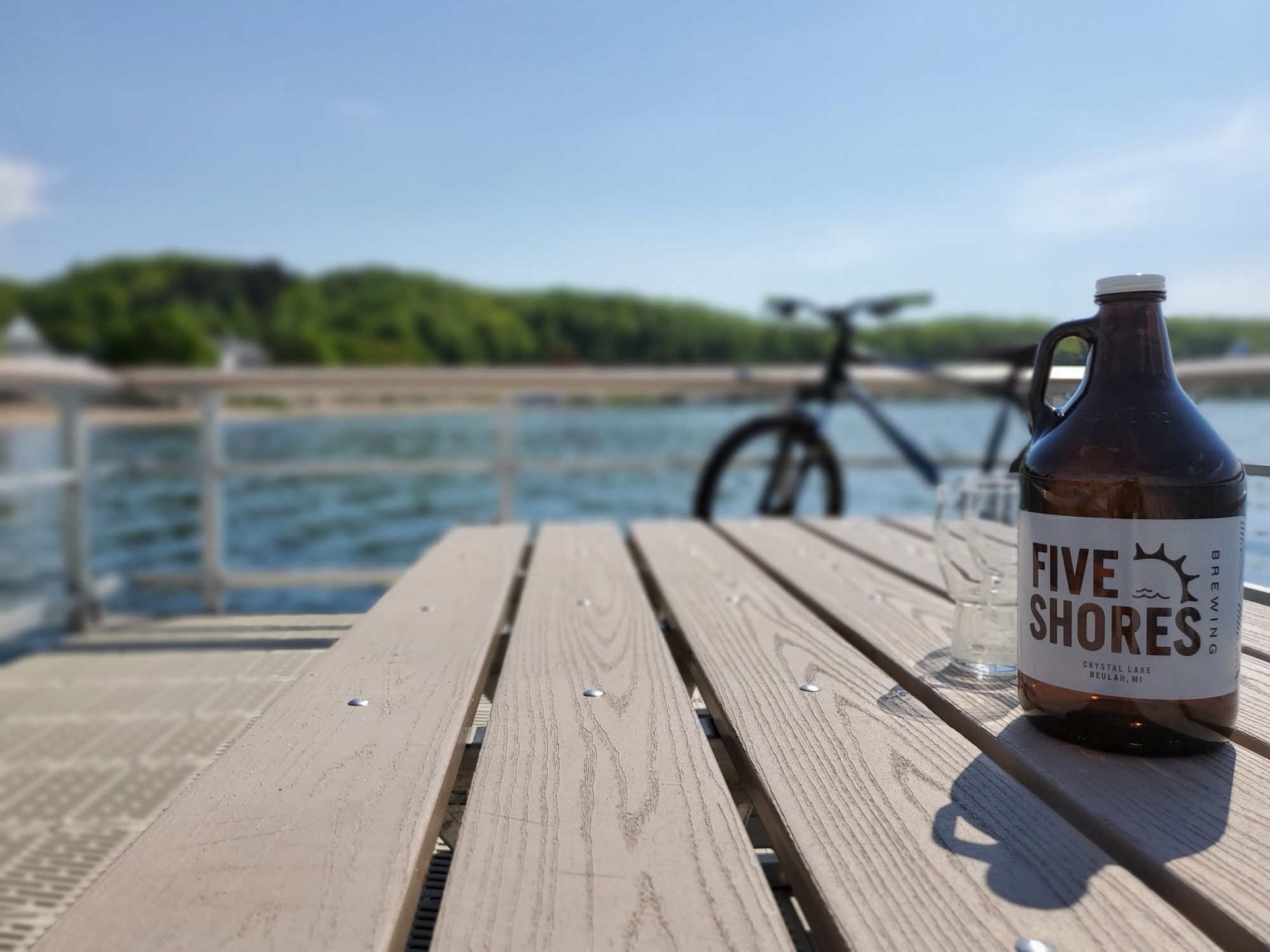