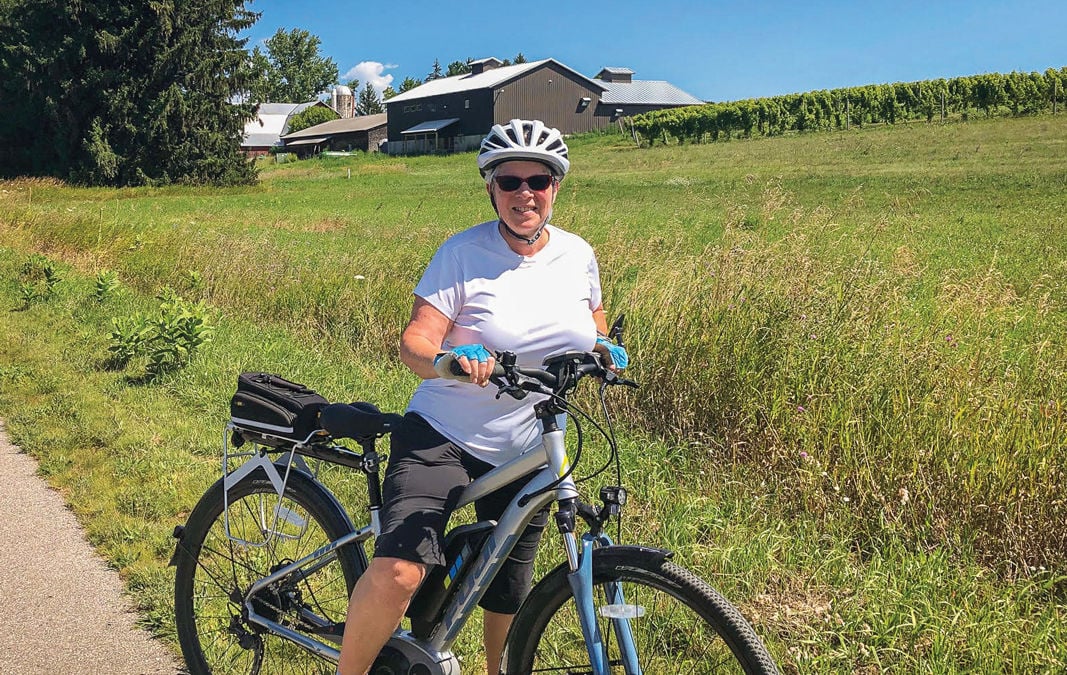 E-bikes, or electric bikes, have been around for a decade, but it’s only been in the last few years that they have … taken off in Northern Michigan.

An e-bike is a bike powered by a battery. For the sake of this article, we are talking about electric “assist” bikes, where you must pedal to move the bike. Here’s how it works: A sensor on the bike determines how much power the motor sends to “assist” your pedaling.

The beauty of e-bikes is that riders still get a workout, but can go on longer rides, cover more terrain and keep pace with faster friends. And—bonus—hills no longer take the fun out of riding.

If you start asking around, e-bikes are everywhere. McLain Cycle & Fitness in Traverse City says e-bikes account for 15 percent of its sales now, a number that is growing steadily as the bikes become more adorably priced. (McLain is offering online shopping with curbside pick-up during the COVID-19 pandemic. Or, call to place an order.)

Of interest: A lot of buyers are women.

And, it’s a love affair. Every woman we talked to LOVED their e-bike. Here, we take a look at what it’s like (joy!) to ride an e-bike.

Linda rode an e-bike on a bike/barge trip along the Danube River in Europe three years ago. She was hooked. She came home and bought one. “With two knee replacements and a rebuilt hip, my e-bike makes it possible for me to bike the hills in Leelanau and keep up with Ed,” she says. Ed’s her husband, and he’s on a traditional bike.

“He enjoys telling people that he’s had to get used to the fact that I can beat him going up hills!” Linda says with a laugh. The twosome has two favorite routes to ride together, such as biking Lakeview Hills Road to Suttons Bay and back (20+ miles). On average, her e-bike goes about 15 mph on the flats and has four levels of assistance: Eco up to Turbo.

She paid $2,600 for her bike at Suttons Bay Bikes (currently closed due to COVID-19 pandemic) and added another $200 in accessories to get on the road. “I tried all the bike shops in the area,” she says. “There’s quite a difference in the way they feel and ride. Take plenty of test rides to find the best one for you.”

The couple has booked a trip that includes an e-bike outing in the Greek Isles this fall. Meanwhile, they’ll be enjoying Leelanau County on two wheels, with stops at Shady Lane Cellars, Hop Lot Brewing Co. and Black Star Farms. “I’ll never give up my e-bike!” Linda says.

A retired elementary teacher, Sara bikes with the Cherry Capital Cycling Club. But because she spends her summers hiking, not biking, she can’t keep pace with the group. So, she pulls out her e-bike and jumps back into the group each fall.

When asked if she gets ribbed by the “traditional” bike riders, she laughs, “Since I don’t have medical issues, I am self-conscious about riding an e-bike,” Sara says. “But it’s more accepted now than it used to be. Although a few club members tease me, they did that when I rode a tandem bike, too, like I wasn’t having to pedal then either!”

Sara’s e-bike has three speeds: “The first is like pedaling a mountain bike with no assistance. The second is a little faster than I can ride on my own, with ‘assist.’ The third speed allows me to ride 20 mph. I use that to ride up hills since my bike weighs about 45 pounds. Or I will use it if I want to catch another rider or group.” Typical club rides are 40 miles, and Sara has no problem with the battery. She’s gone as far as 63 road miles with 3,500 feet of elevation change on one charge. “The bikes are an opportunity to ride faster or longer distances, and to continue to ride with our friends as we age, instead of being ‘dropped’ or riding alone,” Sara says.

Sara spent around $2,000 for her e-bike during a 2017 close-out sale. The thing she likes the most about the new trend is that it brings women into the sport in a new way. “Especially for women who are intimidated by black spandex shorts,” she says. “I know several other women in their 60s who will soon own e-bikes so they can continue riding.”

Linda founded SheBikes, an organization for women who love—or want to learn—to bike. Linda has been a lifelong cyclist, but then she was diagnosed with a rare neurological disorder, Task-Specific Segmental Dystonia, and she had to stop riding completely.

Enter her e-bike. “My e-bike allows me the privilege and ability to bike again,” she says. “I am mostly a road rider with a Class 1 e-bike, which is a model where the pedal-assist cuts out when speed exceeds 20 mph.”

Linda worked with the initial state legislature on where and how e-bikes can be used on area trails. She encourages riders to check with local trails to make sure e-bikes are allowed, as the interpretation of the law continues to evolve.