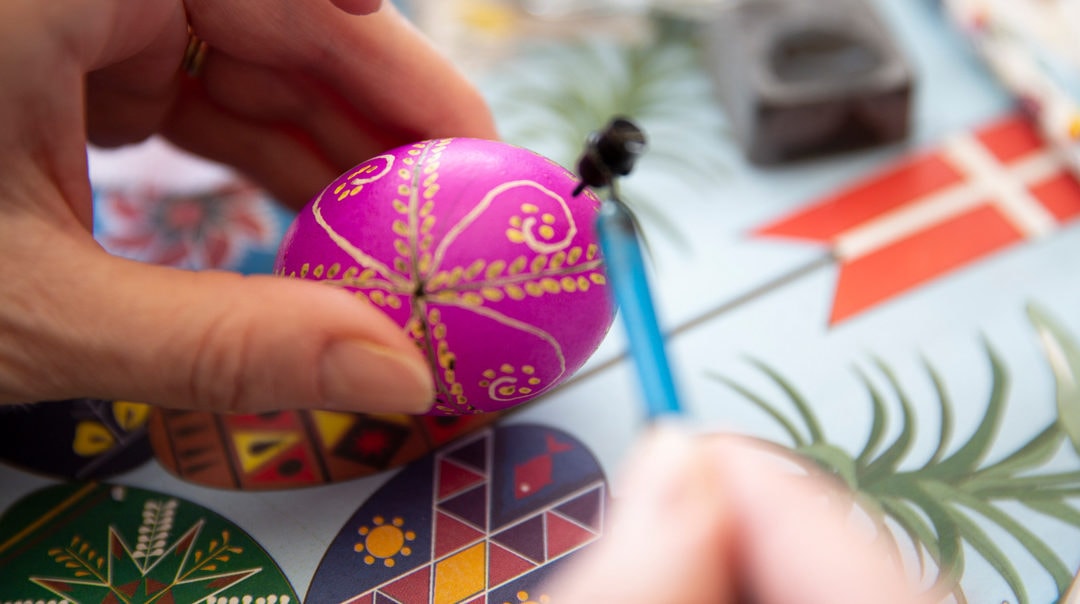 There’s a Polish proverb, “Fate throws fortune, but not everyone catches.” It must have been fate that brought Kathleen Bittner Koch, and thus the Polish Art Center, unwittingly to Cedar. But it was to the good fortune of all.

Due to the coronavirus, the Polish Art Center is temporarily offering online and phone sales only, while the doors are closed. Curbside pickups available for phone orders.

Kathleen Bittner Koch wasn’t thinking about fate a few years ago when all she wanted was to find a place in Northern Michigan to start the farm of her dreams. She and her family chose a place near Cedar, unaware that the village located in the heart of Leelanau County has been settled by Polish immigrants. That heritage has held strong in Cedar for well over a century, as home to the annual Cedar Polka Fest and Pleva’s Meats, opened in 1946 and just now closing its doors. Today, one need only drive through the rolling countryside reading the Polish names on mailboxes and farms to know those roots run deep.

So, where does fate come in? Kathleen is from Hamtramck, Michigan, a town famous for its Polish heritage. Not only that, Kathleen’s family owns and operates the well-known Polish Art Center in Hamtramck, and has done so for decades. More than 250 miles away, Kathleen had found a home in a town rooted in the culture that envelops her entire life.

After moving north, Kathleen and her husband started their dream farm, the Polish Heritage Farm, specializing in raising, among other animals, Mangalitsa pigs. But a few years ago, when a storefront in downtown Cedar opened up, Kathleen couldn’t fight the draw to return to the family trade. In 2016, she opened the new Polish Art Center.

When you walk into the store, it’s hard to decide what is more immediately captivating, the explosion of color gleaming from the handmade art, decorations and gifts, or Kathleen’s palpable energy and passion for all things Polish. The decorative displays and thoughtful curation of everything in the art center is a direct reflection of her family’s dedication, stemming from her father’s life-changing trip to Poland many years ago.

Read Next: A Band of Monks Makes Jam on the Keweenaw Peninsula 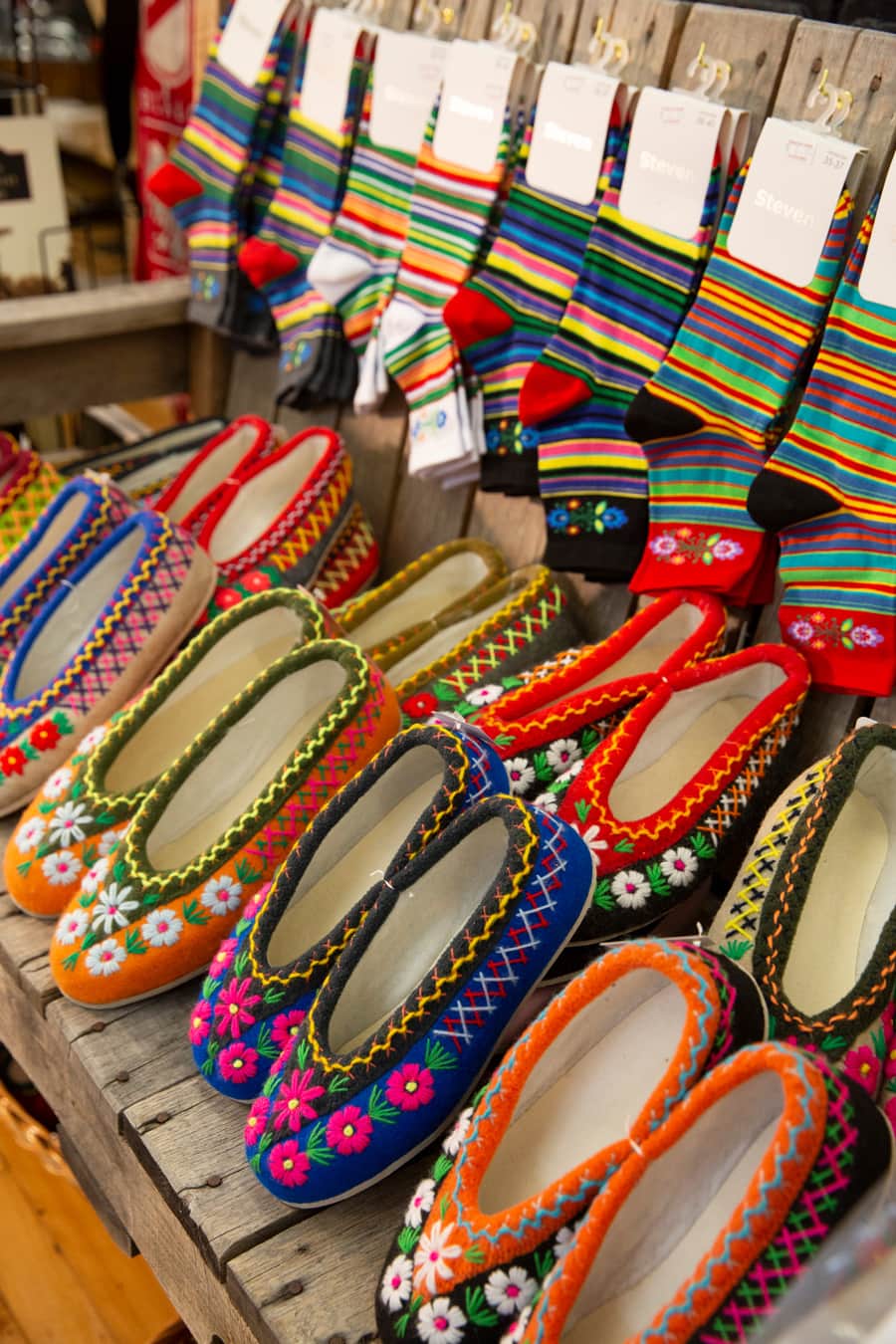 “My dad went to study in Poland his senior year of high school,” Kathleen remembers. “He studied at the Jagiellonian University and he fell in love with Poland. He came home inspired and determined to own a Polish shop. My parents started the store when they were 22 years old.”

Kathleen is still in awe of the decision her parents made at such a young age. “My parents were both from Farmington Hills and they said, ‘We want to buy a store in Hamtramck.’ Their parents were like, ‘You’re crazy,'” Kathleen says. “This was just after the riot of 1967. This was not a time to be buying a business in Detroit.”

Growing up, Polish culture seeped into Kathleen, whether she knew it or not. “I grew up in a small family business, which for most of my life I probably thought was more of a chore,” she admits. “You hated it and you had to do it.”

Years later, she realized it was part of her, ingrained for life. “It’s taken me a lifetime to learn the inventory, to learn the stories behind everything,” Kathleen says. “Somebody was in here and I was telling him about the amber jewelry. I said, ‘Pine sap comes from the Baltic,’ and explained its history. He said to me something like, ‘Do you memorize this?’ I don’t. I’ve just heard it for 30 years. One day, I opened my mouth and I could say it all verbatim.”

All of the items in the store are selected by Kathleen and her family. “Absolutely everything comes from the same source. My dad is the source,” Kathleen says proudly. 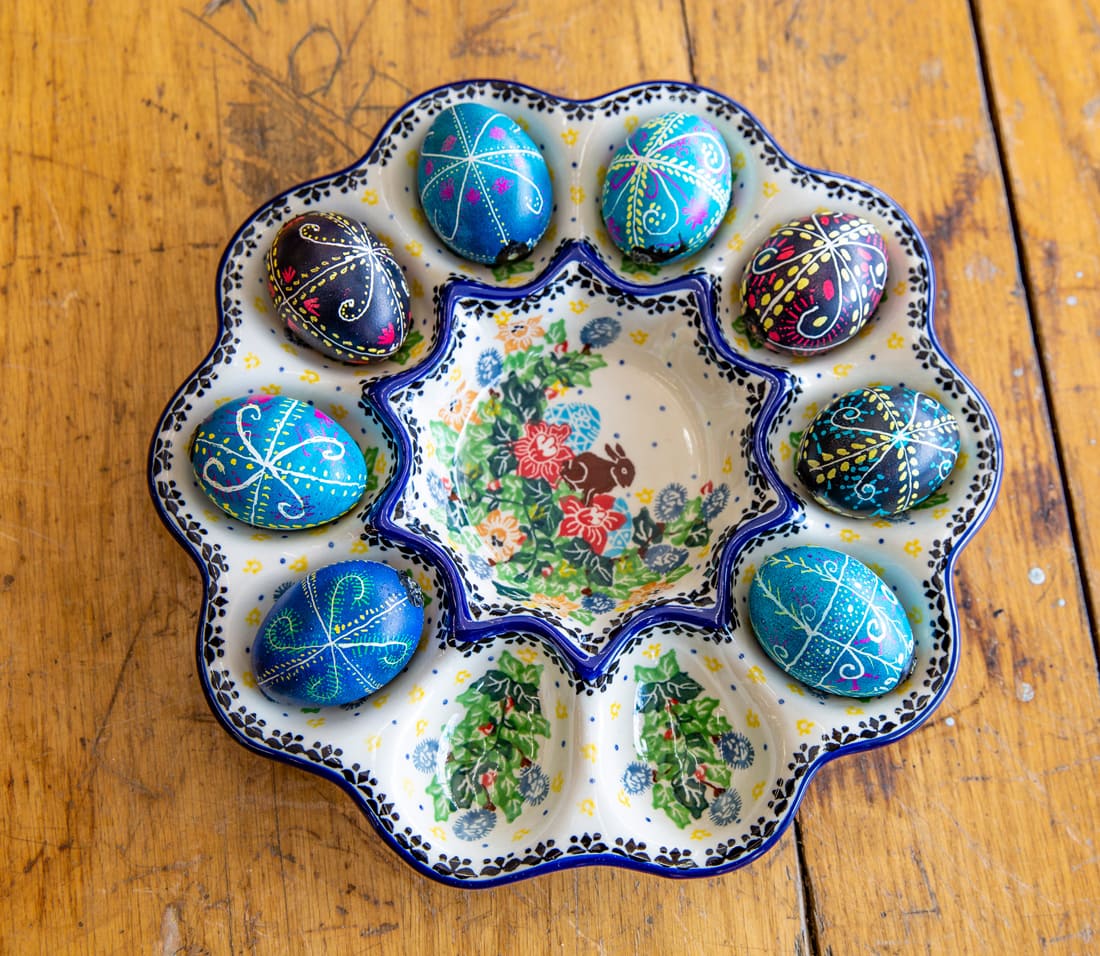 You’ll find beautiful handmade items like boxes made from seasoned linden wood from the Tatra Mountain region of Poland. Also, there are items like intricate straw ornaments, books, food, clothing and, of course, the jewelry made from Baltic amber. The amber jewelry has been a favorite of Kathleen and her sister since they were kids.

“We were the girls in the family and we’d come to this room and say, ‘Mom, why don’t we have more jewelry here?’ We would always rearrange displays,” she recalls. “It was what we had fun doing and now I do that for a living.”

A sure sign of spring is when colorful Easter eggs, called pisanki, begin to appear in the Polish Art Center. Kathleen offers egg painting classes each year, and you’ll see the colorful displays welcoming the warmer months ahead. “People come in here and they’ll say, ‘O, I never knew Poland was so beautiful and so colorful,'” Kathleen says. 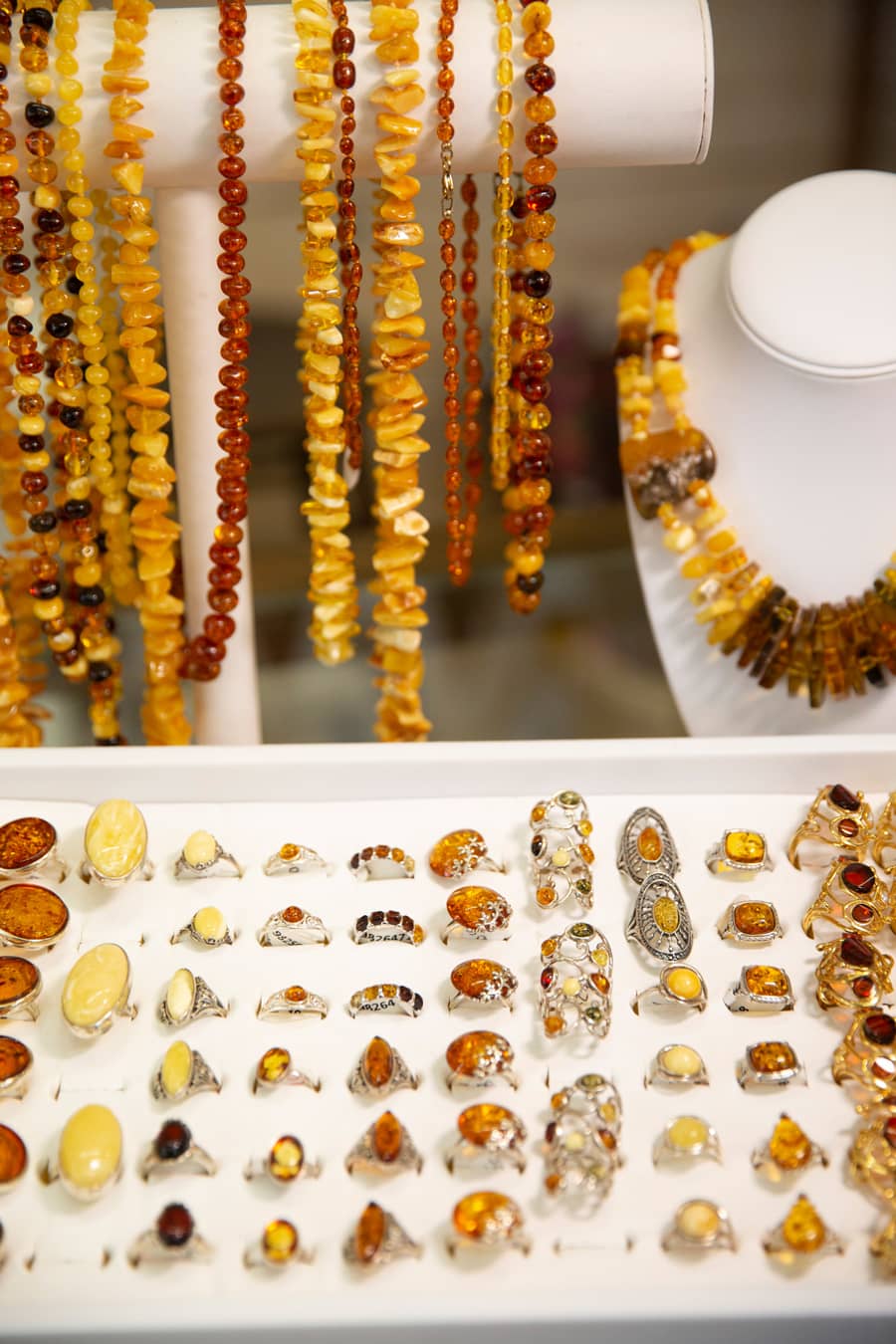 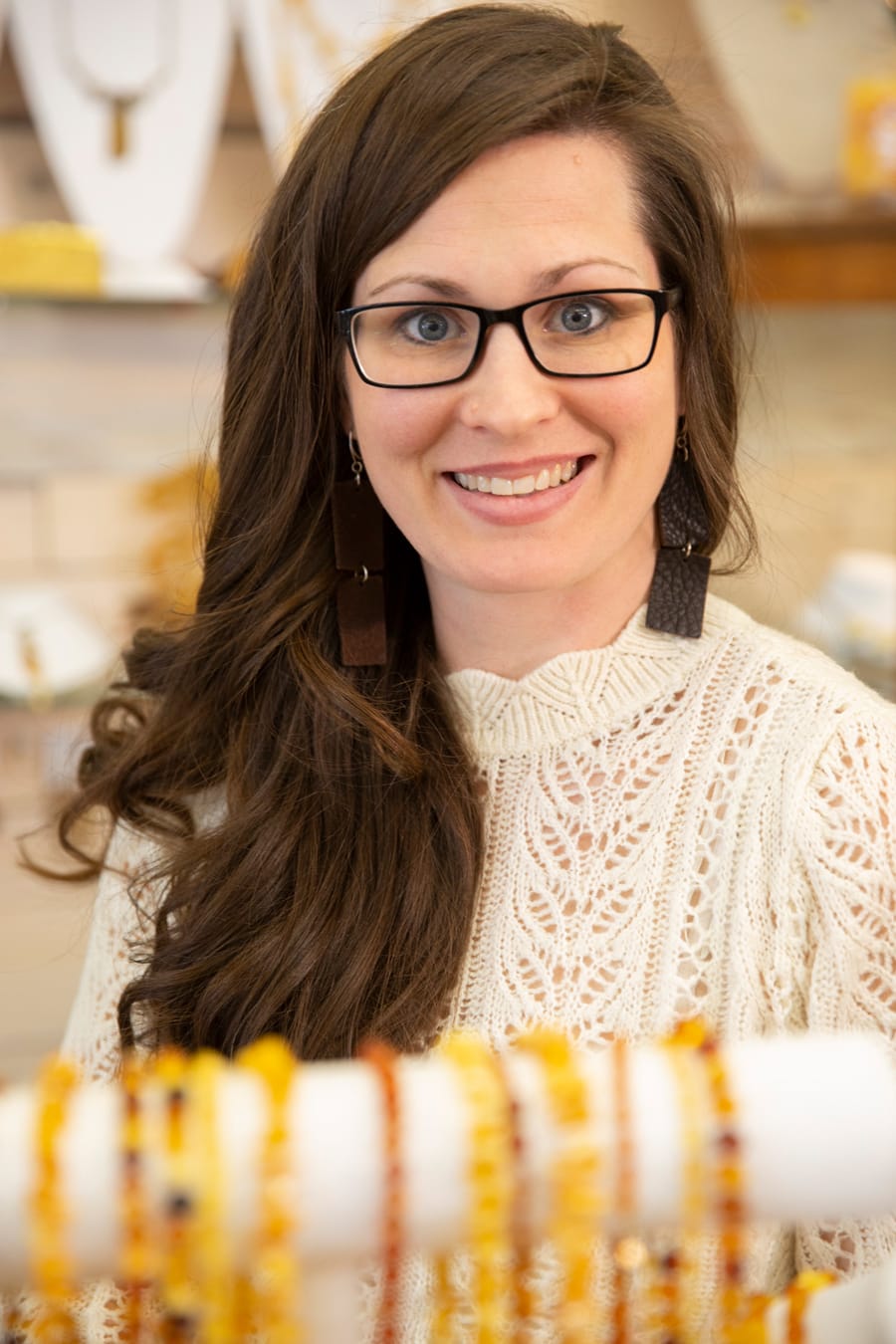 Color also abounds in the large collection of Boleslawiec stoneware, one of the most recognizable forms of Polish art. Each piece of pottery is handmade in the town of Boleslawiec by skilled artisans, so no two pieces are exactly alike.

“In the southwestern part of Poland where the stoneware comes from, the inspiration was the eye of the peacock feather for over a hundred years,” Kathleen says. “Peacocks were always a sign of royalty. The Polish people would use them in their costumes and as inspiration for their patterns. You’ll notice a lot of blue and the green and it’s all hand painted.

“Polish people, I swear, they don’t like anything plain. Everything has to be decorated. If I’m going to use it, why wouldn’t it be beautiful?” 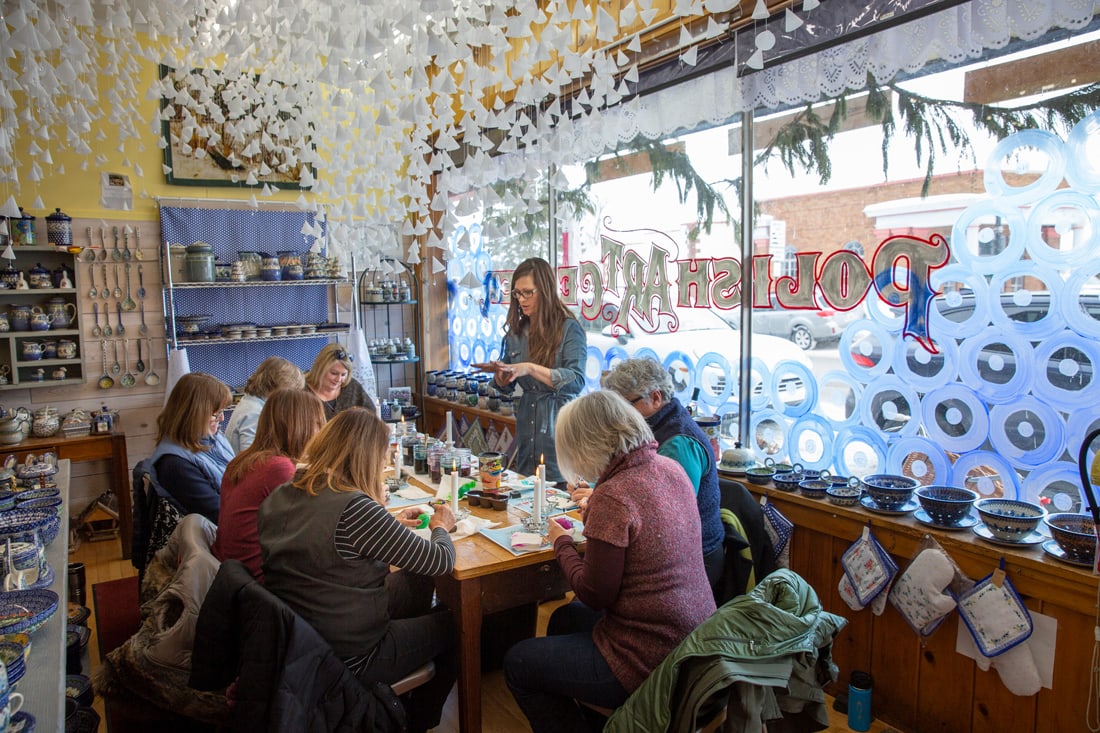 In addition to providing a new center for Polish heritage in Cedar, Kathleen has also joined up with the group that plans the annual Cedar Polka Fest to bring their knowledge and expertise to the already popular event. Plus, for those concerned about the void in Polish food options that might be left with nearby Pleva’s closing, Kathleen already has a plan in motion.

“I carry a whole line of great Polish food from Srodek’s in Hamtramck, like pierogis and potato pancakes,” she says. “Srodek’s is currently state-certified, and they will be going USDA soon. When that happens, they can wholesale all of their meats. Then, I can sell the kielbasa and it’ll all be brought up frozen fresh from Hamtramck every week.”

Her dream realized, Kathleen now hopes the art center will not only become a place for visitors from out of town to experience authentic Polish traditions and artisanship, but also a place for locals to gather and celebrate their beautiful culture. One need only step into the warm shop to realize Kathleen has already succeeded.