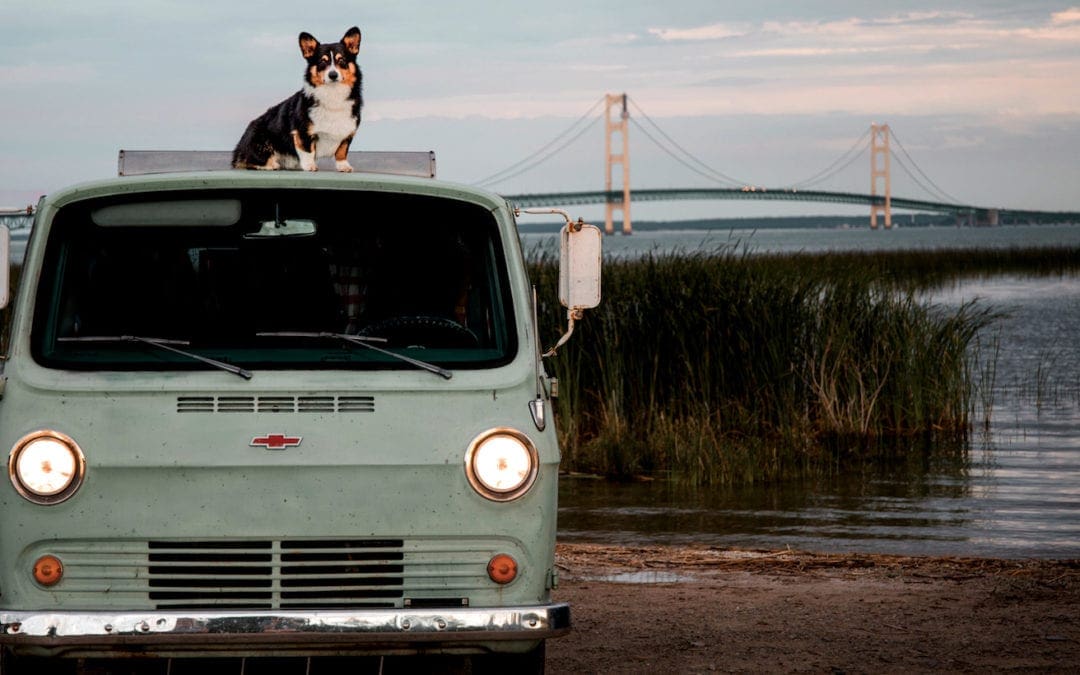 It’s only natural that Northern Michigan dogs would be known for adventure, service, farm life and, of course, water. Here are six who joyfully live those lives in the north.

Featured in the April 2020 issue of Traverse, Northern Michigan’s Magazine. Get your copy.

Bohdie is Thom and Sharon Behrns’ 21st gift to the blind. The Behrns, who live in Manton, volunteer as “puppy raisers” for Leader Dogs for the Blind, a nonprofit organization in Rochester Hills. Bohdie is their 21st puppy—a 10-month-old “black-cross” (a black Labrador retriever and golden retriever mix).

“Our job is to provide tons of love, along with obedience and socialization,” Thom says. “We get the puppy at 8 weeks old and we start taking them everywhere.” Bohdie will spend one year with the Behrns before he returns to Leader Dogs for formal training and actual guide work for another 4–6 months.

Bohdie gets another kind of education, too: He goes to school with Thom, a para-professional at Manton Schools. “He waits for his next command while sleeping at my desk on a tether,” Thom says. “The students are a great help in raising him.” 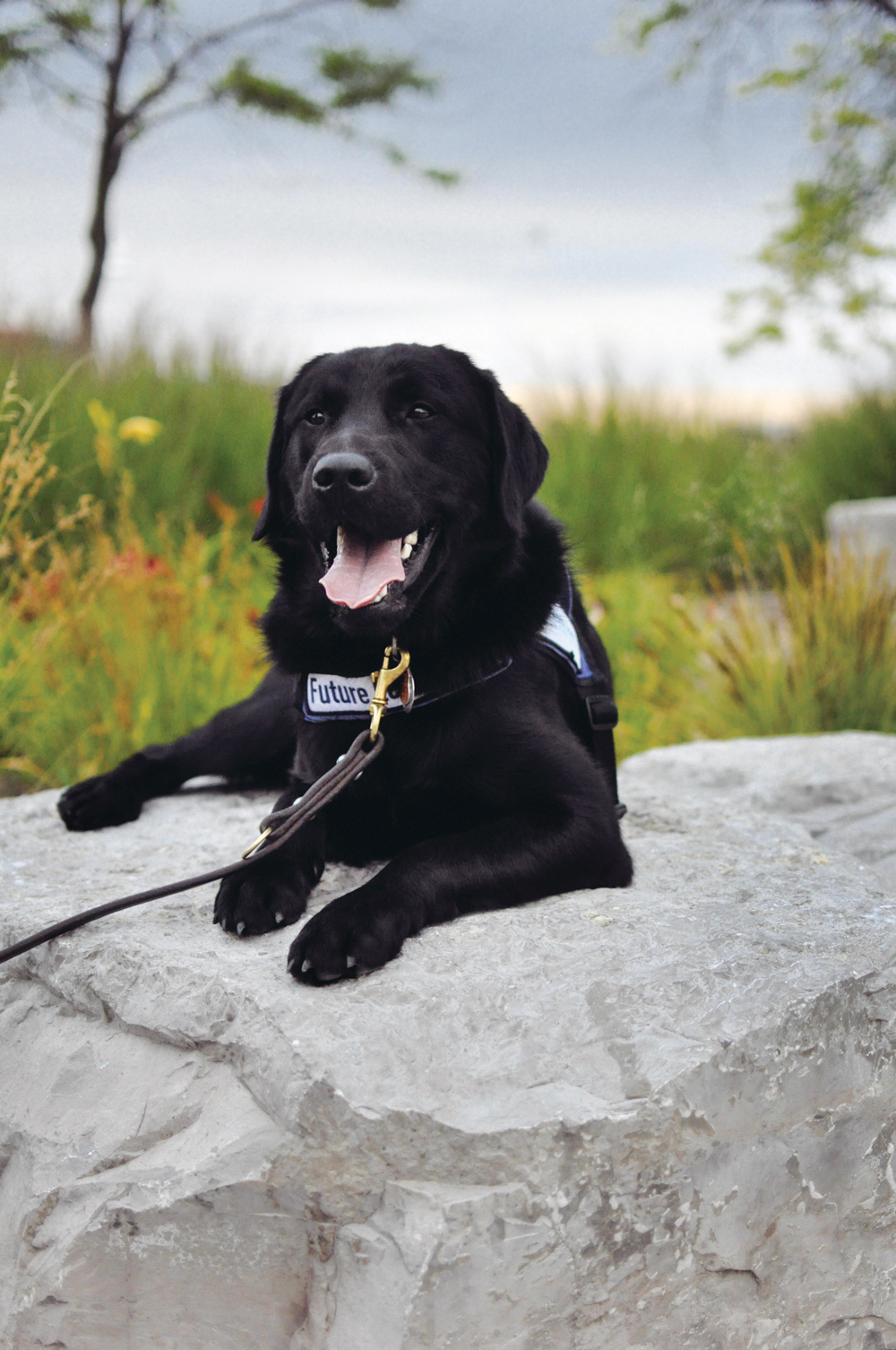 So, what’s the training hurdle for a leader dog? Other dogs.

“We use treat training,” Thom says. “And we also use distance as our friend. Knowing how close we can get while still maintaining and reinforcing good behavior is key. Before you know it, we have moved in very close to another dog and our puppy is behaving as he should.”

Whether or not Bohdie becomes a guide dog remains to be seen. “You can’t force the dog to do guide work, the dog makes that choice,” Thom says. 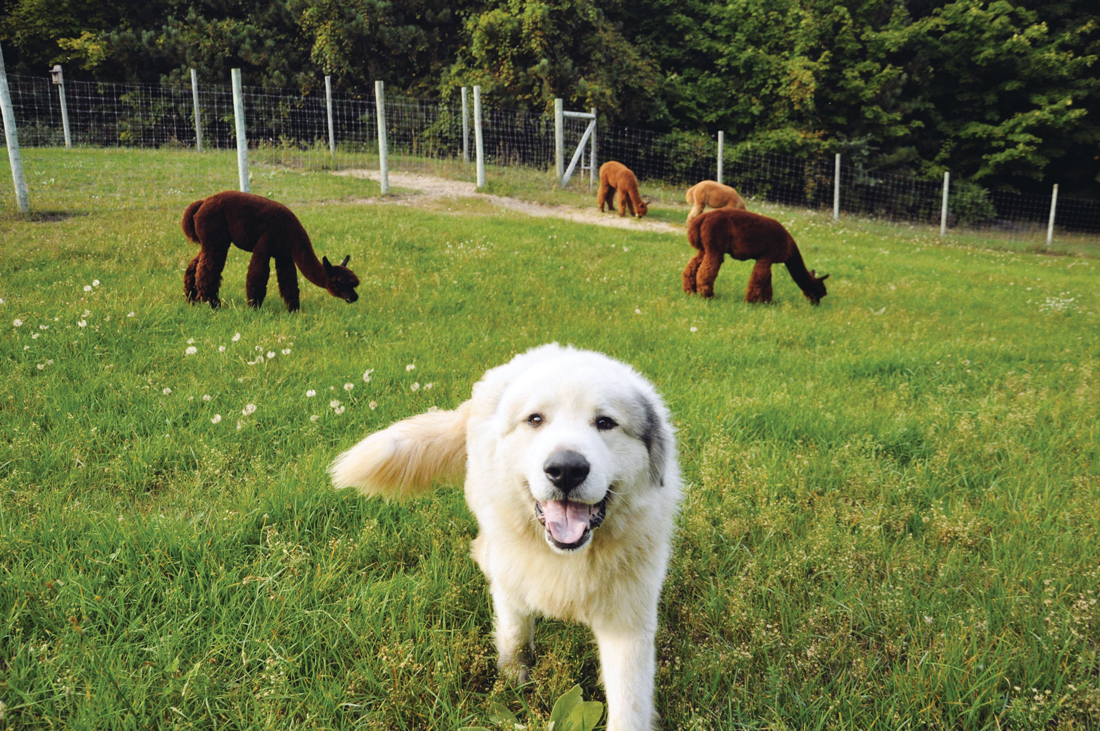 Christine and David Nelson, DVM (Doctorate of Veterinary Medicine), own Crystal Lake Alpaca Farm and Boutique in Frankfort, where they show, breed and sell alpacas across the United States, as well as sell alpaca products in their two shops. And, just last year, they opened an animal park where people can visit their 50 alpacas, as well as various miniature donkeys and dwarf goats.

The farm is a lot of work for all, but the Nelsons say it’s the dogs that keep things running smoothly. “We have three Great Pyrenees—Banner, Shandy and Murphy—that guard our herd 24/7,” Christine says. “We always joke that the alpacas belong to them, and we work for our Great Pyrenees.”

These dogs take their jobs seriously. “They stay awake at night watching over the alpacas and barking warnings to coyotes to stay away,” she says. “Throughout the day, they mark their territory to ward off the threat of cougars and bobcats.”

Despite their imposing size and bark, Christine says they are gentle creatures. “They are not aggressive unless their is a threat to their herd,” she says. “The dogs respect the alpacas’ gentle nature, and they try to keep a calm atmosphere among them.”

Visitors to the farm will likely see the dogs, but Christine has to remind them that they are working, and sometimes that means letting them nap. “We have a sign on our fence stating, ‘Caution … Alpacas will steal your heart!’ Well, the Great Pyrenees do as well. There’s truly a reason the word ‘great’ is in their name.”

Thomas Bos is an award-winning photographer and owner of Bos Exposures, but he freely admits he’s known as “Bob’s Handler.” Bob, a 4-year-old labradoodle, has stolen the show.

To date, the twosome has more than 15,000 followers on Instagram. Bob’s Instagram debut was during his first adventure, a 2014 trip to Sleeping Bear Dunes National Lakeshore at just 9 weeks old.

Thomas says he knew his dog was different from Day 1. “If you ever meet Bob, you’re gonna freak,” he says. “His eyes—oh my god—he’s human! And he only woofs, like he’s trying to explain something. I’m not kidding. It’s never mindless barking. You just have to see it.”

Thomas took home the People’s Choice Award from The Detroit News this summer for his photography and was also recognized in the prestigious “Nikon 100” list, but he has to admit, “It’s Bob who has fans all over the world.”

In 2017, when the pair hiked out on frozen Lake Superior to photograph the ice caves near Grand Island, they were recognized. “I’m walking across, and Bob, well, Bob’s peeing on stuff,” Thomas says. “Then I hear someone shout, ‘Hey, it’s Bob and you’re Bos Exposures!'”

Thomas couldn’t believe it. The family was from Wisconsin and had trekked out to see the caves because they’d been following Bob’s adventures online. Since then, Thomas has fielded hundreds of messages about Bob (“Bobbers”), and everywhere they go, Bob gets shout-outs.

If you look up Borchers Au Sable Canoe & Kayak Livery in Grayling on TripAdvisor, you’ll find as many happy reviews about their five-star dog, Mercedes, as you do the beauty of the river.

Her owners, Mark and Cheri Hunter, run the riverside bed and breakfast and canoe livery, and when they decided it was time for a dog, they knew they wanted an Australian shepherd lab mix.

“Every day my husband would ask me for the ‘name of the day’ for out future puppy,” Cheri says. “One day I said Mercedes, and we could call her ‘Cede (pronounced Say Dee). He hated the name.”

Eventually, they found puppies, but they were a long way from Grayling. Cheri called anyway, and the lady had one puppy left. A girl named Sadie. “We made that four-hour drive to Indiana!” Cheri says.

Since then, ‘Cede has spent 10 years on the river—and learned a few things the hard way.

Like the time she swallowed a treble hook the size of a quarter.

“We got her to the vet immediately,” Cheri says, “but I’m a practical person and I thought, ‘How much is this going to cost us?'” They knew they were facing lost business on Labor Day weekend, and the cost of the operation. “But the vet ran a scope down her throat and removed the hook at a reasonable rate. ‘Cede did not have a scratch! We were on our way home by 4 p.m. and back to business.”

For ‘Cede the meant back to welcoming customers and showing everyone just how much you can love the river.

Corgis are a working breed, and Darwin the corgi is clearly working at becoming famous. Darwin is online in a very big way. He boasts more than 20,000 followers on Instagram and works with six sponsors, including M22 in Glen Arbor. In short (no pun intended), he’s a four-legged star with his personal paparazzi, thanks to his owner Taylor Featherstone.

Taylor owns Featherstone Fotography in Traverse City, and her “Adventure Pup” was a gift from her mother on her 21st birthday three years ago. Right away, Darwin began tagging along on hiking and photography sessions with Taylor.

“Everyone loves corgis,” Taylor says. “People giggle and gasp—and some have cried—when meeting him.” Fans can watch Darwin shaking off after a dip in the river, hanging out on the beach (with sunglasses on!) or relaxing by the grill.

But, Taylor warns, corgis are a herding breed and can be very stubborn and high energy. “Let me get all dog nerdy and say that corgis are definitely not a dog for everyone,” she says. “They are a lot of dog in a small package.”

With time and training, the payoff can be big, in having a truly loyal companion up for it all.

“Darwin will do almost anything I ask him to do,” Taylor says. “I put a good amount of work turning him into the dog I wanted and equally molding myself into the type of handler and owner he needed.” 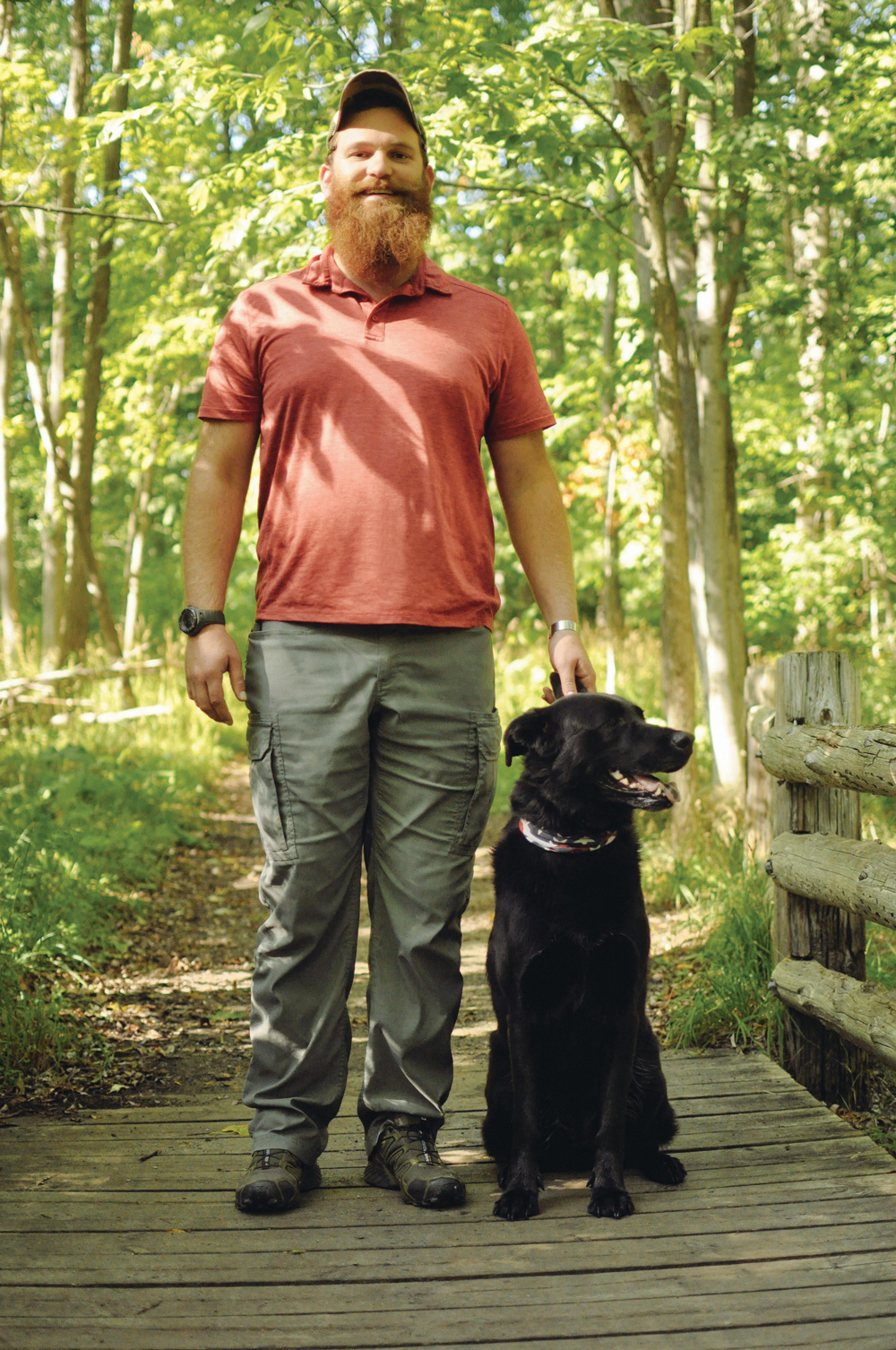 Everyone loves to admire a service dog. But throw in a mohawk, and the whole world’s a fan.

Bailee is a black lab, German Shepherd and Rhodesian ridgeback mix, and the two have been together since she was a puppy.

“Bailee is 7 years old, and I have been sober now for four years,” Lucas says. “We have been through everything together. No matter what happens, she is always on my left.”

Sometimes that means Bailee does the unexpected. Lucas was doing a presentation on PTSD for a class at Northwestern Michigan College and found himself on stage, too nervous to get started.

“Bailee started losing her mind,” Lucas says. “She was barking and jumping on the stage.”

Lucas didn’t know what was wrong, but when he got down to calm her, she sat down and nuzzled his hand and wagged her tail. Lucas realized he was no longer shaking; Bailee had calmed him and he was able to finish his speech.

“Everybody was staring at Bailee, but she laid there and behaved perfectly because she had completed her job,” Lucas says. “Dad was going to be just fine.”