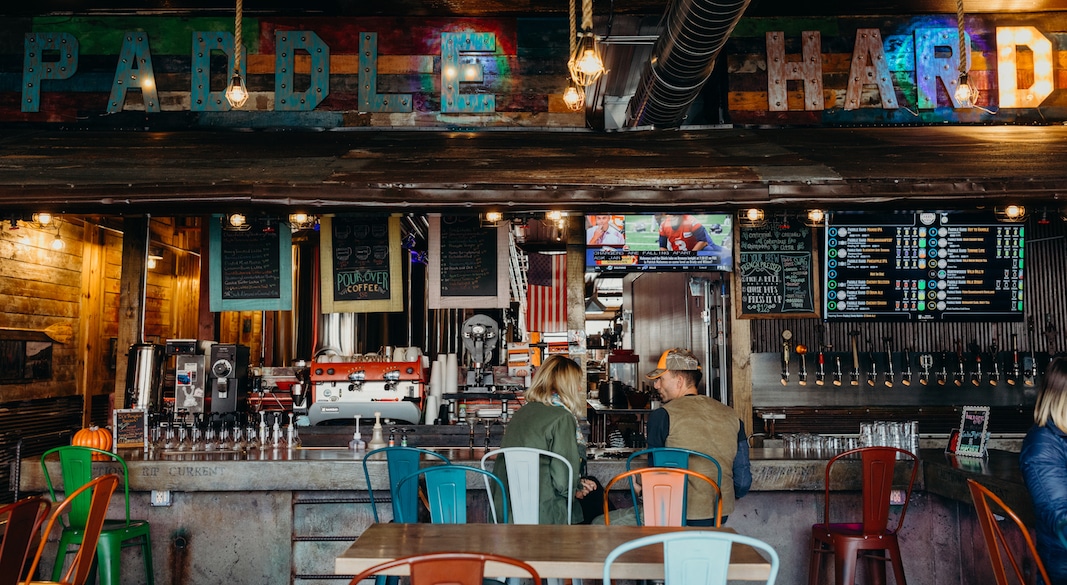 The Swanders. It’s a name synonymous with “feeding.” That used to mean one thing, nut now it means another. Let me back up. Grayling is home to the AuSable River Canoe Marathon that takes place every summer. This 120-mile race involves canoe teams launching at dusk on the last Saturday in July and paddling through the night. Their trip involves six portages, many in the dark of the night, before arriving at the finish in Oscoda by 2 or 3 p.m. Sunday afternoon. But they can’t get there without their “feeders.”

Feeders are the quick, nimble (a.k.a. too-slow-to-say-no) friends and family who are charged with rushing ahead of their teams down the river, then wading into the water every 2–3 hours to provide fresh food and drink.

I don’t mean to oversimplify the role of the feeder.

It’s dark. There are 100 black boats (you know which one is yours, right?). You’re in cold, fresh Michigan water up to your thighs, holding a tall drinker bottle in one hand and a red-lidded plastic container of gel, fruit and food in the other. You stand and wait in the water, shivering, hearing the call of HUP! from the paddlers, losing track of how many boats have passed by and arguing with your co-feeders over the count and when your team is coming … or not.

When they do arrive, you drop the feed into their laps as they fly by. You only have a moment and timing is everything. You stand still, call their boat number and let them come to you. One misstep in a dark river and you swim; but even worse, you miss their feed.

Feeders can’t run late, can’t get sick and can’t turn up lost. The paddlers, however, have the luxury of doing all those things, and usually will at one point or another as the night unfolds.

Feeders are the control; teams are the variable. It’s a terrifying, thrilling job.

And when it comes to feeding, “Call the Swanders!” is the war cry of the marathon. If you need something, they’ll know, they’ll help and they’ll feed. Their family members have fed dozens of teams and hosted countless out-of-town paddlers over decades of the marathon tradition. 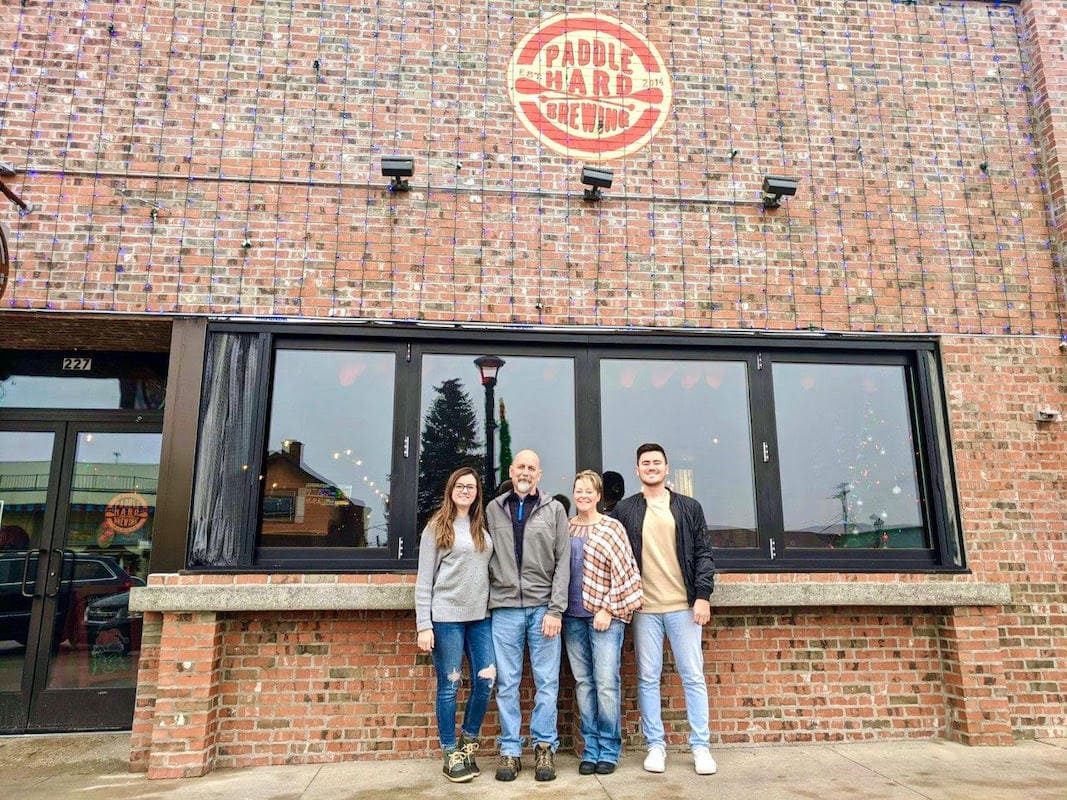 This year, though, the idea of feeding takes on a whole new meaning for the Swanders.

In addition to feeding teams, they’ll be feeding the town as the new owners of Paddle Hard Brewing, a restaurant and brewpub in downtown Grayling, and The Paddle Hard Yard, an outdoor eating venue that is opening this summer.

“We are excited to be the new owners,” Chad Swander says. “And the community is excited, too. Most everyone in this town knows us as the family who feeds!”

Chad’s day job is how his new venture in feeding all started. About a year ago, founder and then-owner of Paddle Hard Brewing Dave Vargo asked Chad to help with the design of his new venture, The Paddle Hard Yard. Chad, who does design work for the Kodiak Group, an industrial engineering and design firm in Grayling, jumped right in. The plans included outdoor seating in shipping containers (yes, shipping containers), live music and food trucks. The Swanders had always wanted to run a restaurant. Perhaps, they thought, this was their chance to follow that dream by owning one of the food trucks.

As fall unfolded, the idea grew into something bigger, and the timing was right for everyone: Dave called and asked the Swanders if they would like to buy Paddle Hard Brewing. As talks progressed, the offer grew to include The Paddle Hard Yard.

For the Swanders, long-time Grayling residents, it was a match waiting to happen. 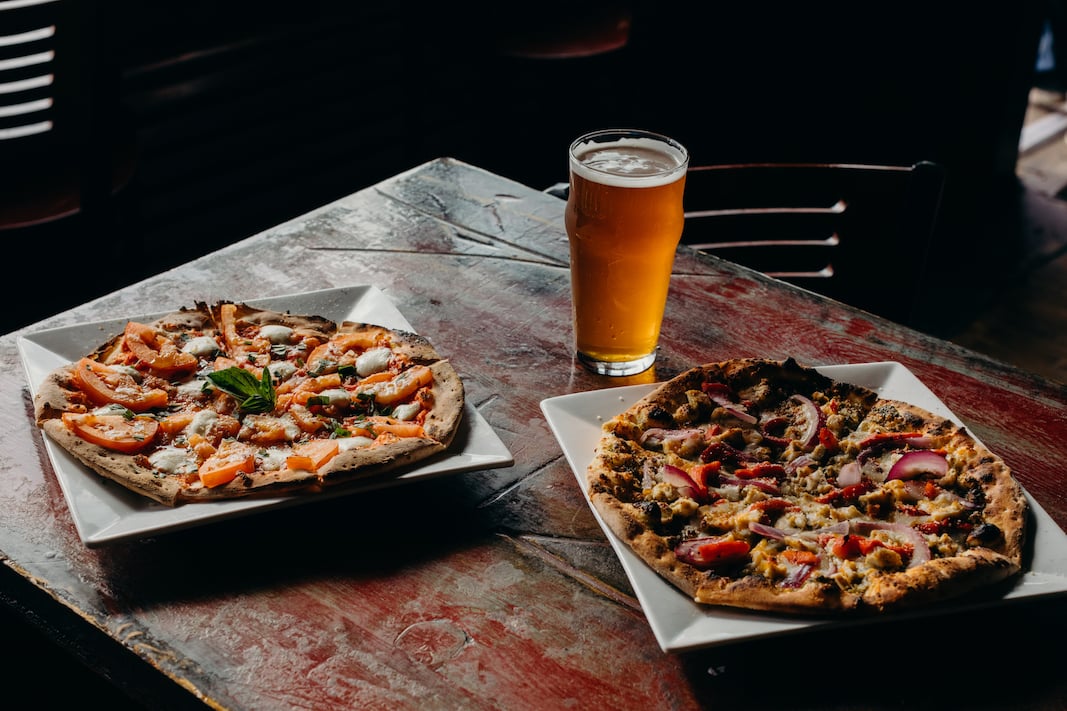 With their new gig, Chad is overseeing construction of The Yard, as well as kitchen and dining room remodels at Paddle Hard Brewing. He’s also, for now, still working at Kodiak Group. His wife, Jenny, has left her former job in administration to oversee front-of-the-house and day-to-day operations at the restaurant. Plus, many of her customers at Paddle Hard will know her from her 16 years of coaching volleyball and basketball at the Grayling schools.

Josie, their daughter, is the general manager and does everything from payroll to marketing. She’s coming from seven years of organizing venue events for things like the Super Bowl, and from her last gig, working with the Lions at Ford Field.

Jake, their son, has worked on and off at Paddle Hard since it opened in 2014. Jake is pursuing a career as a collegiate football coach and will pop in and out of Paddle Hard during his off-season.

In all, it’s a true family affair. The Swanders are working together to make Paddle Hard theirs, a stroke at a time, just like you might a marathon. 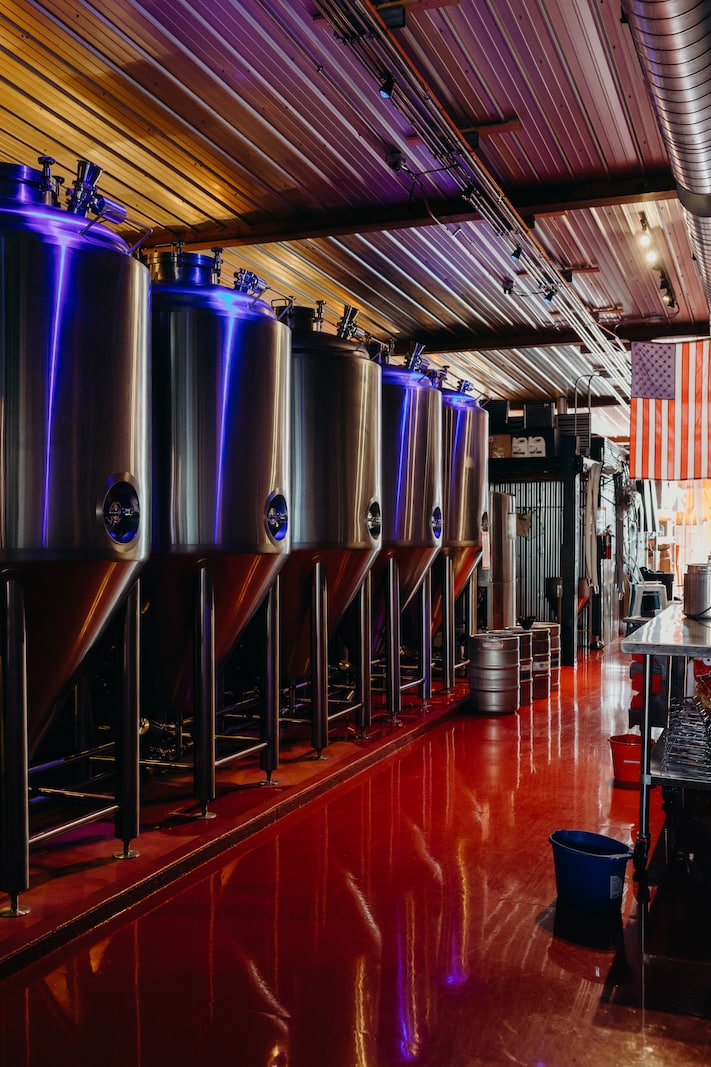 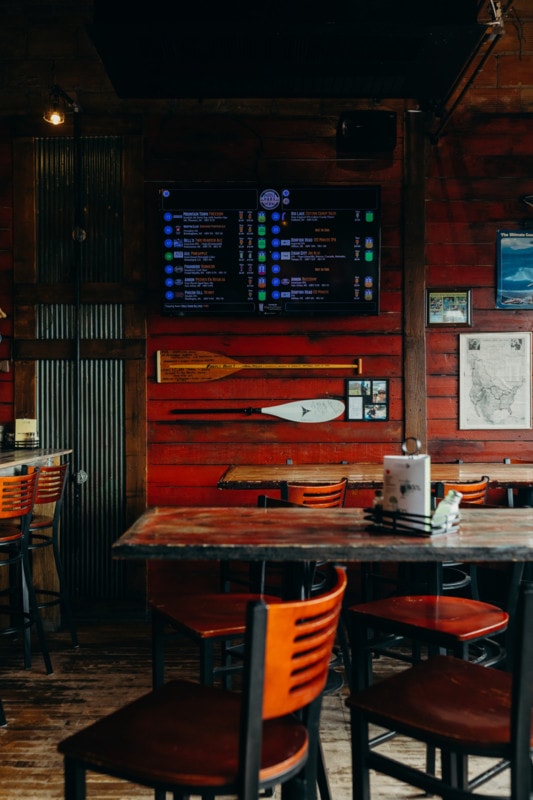 “Paddle Hard really brought Grayling out of stagnancy,” Josie says. “There was not a lot of industry coming in, and the restaurant established itself as a good meeting point in the community. It set the downtown up for a lot of growth.”

Jenny, Jake and Josie were all born in Grayling and Chad has lived here for 40 years. They can all remember when the town was dead, just five years ago.

“Paddle Hard became a catalyst, a destination, a place to come,” Chad says.

The draw, from day one, was the on-site brewing and the tip-of-the-hat to the canoe marathon, the town’s first love.

The Swanders would like to continue the brewing tradition by offering small batches of signature brews, all paying tribute to the race that helped put the tiny river town of Grayling on the map. Paddle Hard’s location doesn’t hurt either: They are perched just off M-72, the getaway to popular Traverse City for people coming north up I-75.

“People make a point of stopping here to have a drink now, just like they do for Short’s,” Chad says. Paddle Hard is also part of the TagaBrew program, an online brewery trail with 202 stops in Michigan, where participants collect copper “memory tags” at each brewery they visit.

In addition, the walls of the restaurant have become a place to hang prized paddler memorabilia. There are paddles signed by those who have paddled 3,000-mile stretches in Canada, plus signed paddles from first-place marathon teams. And, there’s a digital clock on the wall that counts down the minutes until, you got it, the next marathon. It goes without saying that the night before the marathon beats any New Year’s Eve in Grayling. 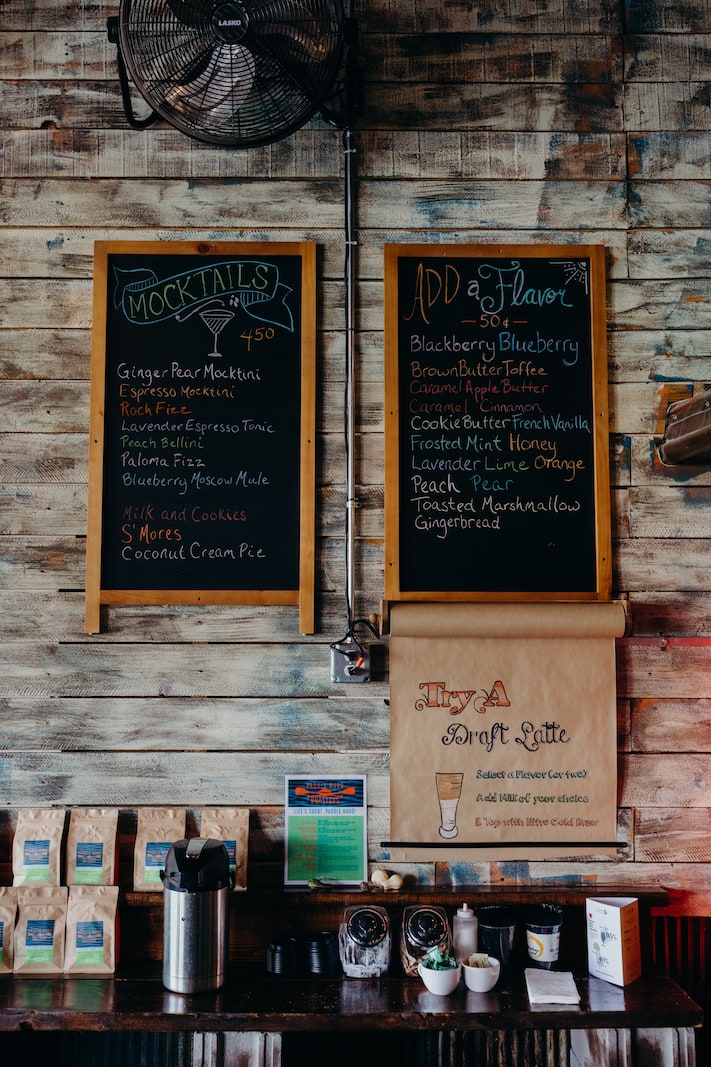 The day I stopped in, I immediately ran into someone from my hometown, Interlochen. We hadn’t seen each other in a year, even though we live just 10 miles apart. But there we were, both in attendance at a brewery some 70 miles from home.

“What are you doing here?” we asked at the same time, laughing.

She’d come with a co-worker, a nurse from Munson Hospital. It was their day off and this was how they chose to spend it—driving to Paddle Hard Brewing among the rustic, rolling hills of fall colors around Grayling, to try a new beer together. 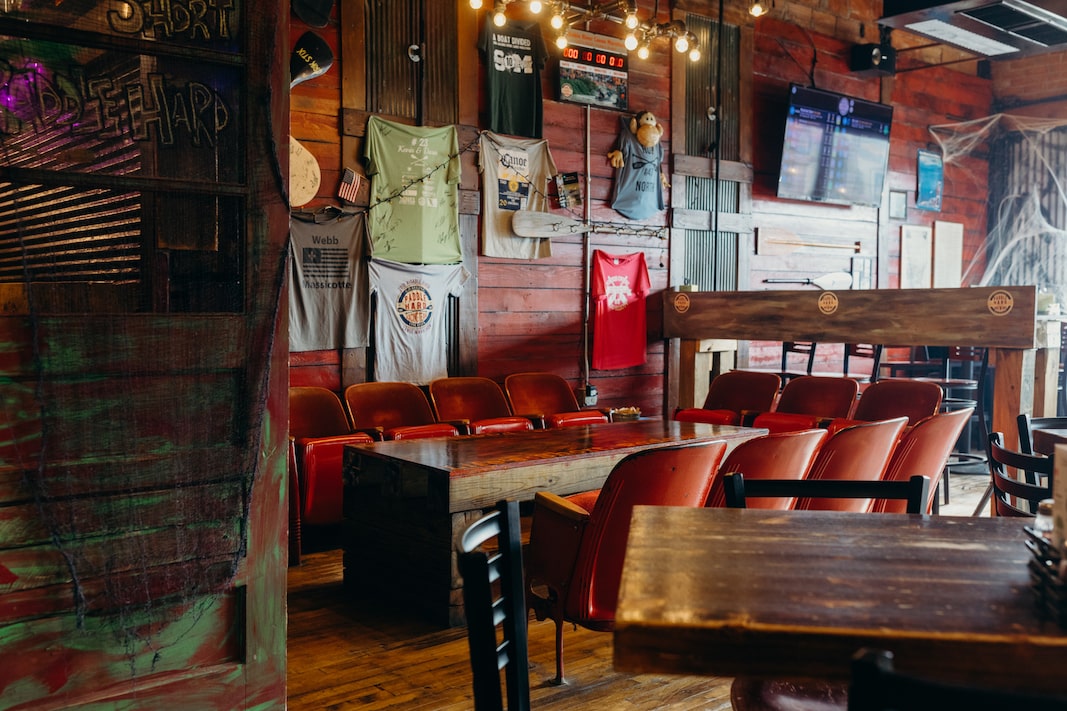 I was there to meet Jess. She, like me, is a “Paddler’s Wife.” The moniker refers to the wives who feed their husbands for the marathon. It’s a life in which you spend most of your summer weekends raising your kids on the shores of the river together, watching boats. You gripe about it, but, in the end, you have to admit you’ve built a family. There are a lot of us wives, but don’t let the name fool you; there’s a husband in the group, too. He’s our favorite wife of all.

During my visit, Jess and I saw a few paddlers we know. It’s a guarantee: If you’re from within (apparently, 70) miles of Paddle Hard, you’ll know someone.

By this summer, Chad will have made major changes to the kitchen. The brick oven that used to bake only two pizzas at a time will be replaced with a new brick oven with a rotating deck, upping capacity to 14. The tiny kitchen, which often struggles to offer room to move on the prep line, will grow two-and-a-half times in size and house two prep lines. The dining area out front will be expanded to accommodate 12 to 15 more seats.

The restaurant has a rustic, urban feel. Instead of the traditional knotty pine Northern Michigan decor, there are dark barn wood walls, corrugated steel sheeting and windowpanes and doors hung on the wall. The combination makes for an outdoorsy feel inside.

“It’s standing room only in here in the summer,” Chad says. “This will help, when it’s our busy season, when all the paddlers are in town.”

The favorite spot is a cozy U-shaped nook with low-slung couches and cushions. Over by the window, there are taller, longer tables. Next to them sits a squat, wooden table, the paint faded and “Life’s short, paddle hard!” stenciled on the surface. Above it, in a sea of colors, are signed T-shirts from paddling teams that Paddle Hard sponsors. 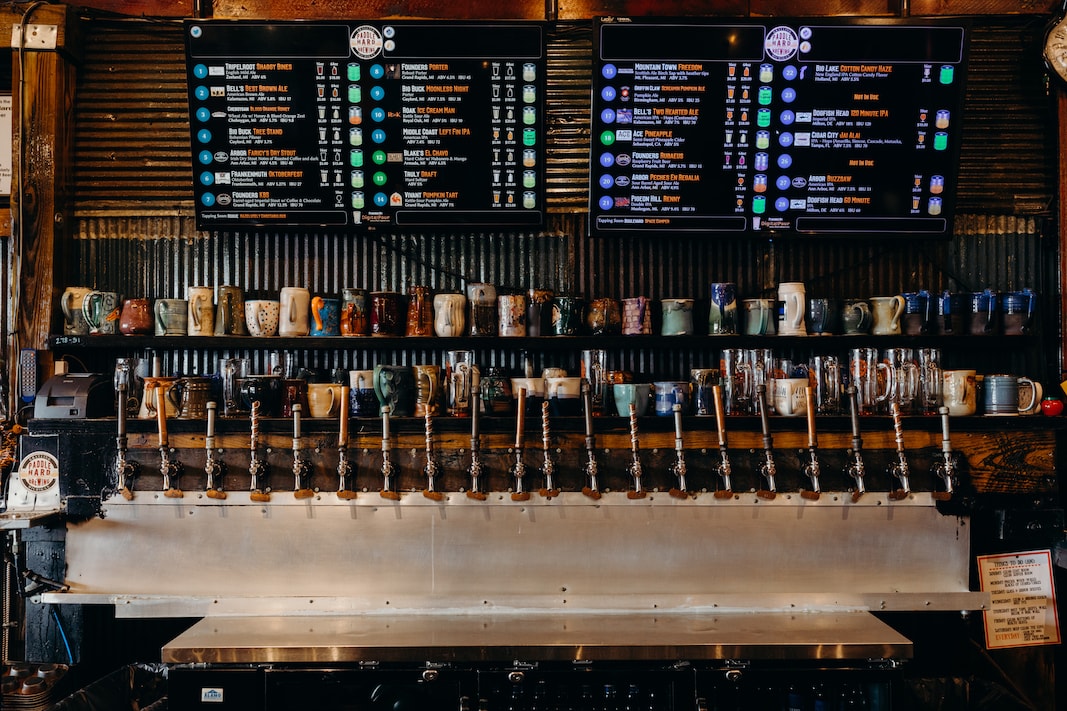 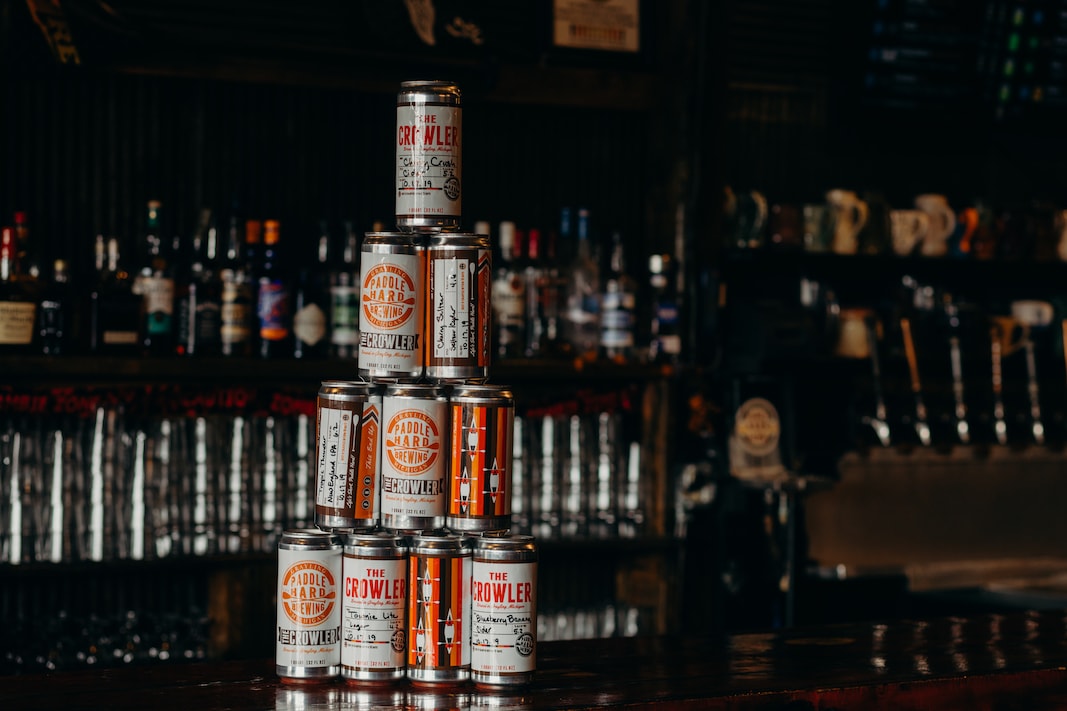 This summer also brings The Paddle Hard Yard, the design of which started it all for the Swanders. Located just down the street from Paddle Hard Brewing, The Yard is an outdoor venue similar to the popular Detroit Shipping Company downstate.

“It’s literally storage containers, stacked,” Chad explains. “There will be a bar, bathrooms, a balcony, room for a band and food trucks. We will have multiple containers with open and covered seating throughout. It’s pretty sweet!”

One of the food trucks, naturally, will be a Paddle Hard food truck with all the favorites on board.

“It’s going to be a new option, something to bring people into town and keep them in town,” Josie says. “Developing new outlets for people to enjoy is key to the development of our area.”

As their plans come together, Grayling seems to be rallying around the new owners, the community’s favorite feeders. But, as a Paddler’s Wife, I have to know: Who will have to stay behind and mind the shop the night of the marathon?

“I volunteered,” Josie says with a laugh. “But the last time I missed a marathon, I made my dad FaceTime me at every dam, any time he could get a signal!”

And with that, it’s easy to see why this family is the perfect switch for a place call Paddle Hard—HUP!

Kandace Chapple is the editor and publisher of Grand Traverse Woman Magazine. Her essays have been published in Writer’s Digest, Chicken Soup for the Soul, Literary Mama, Motherwell and more. She loves to mountain bike on Northern Michigan trails, hike with her dog, Cookie, and spend time with her husband and two sons. kandacechapple.com // Photographer Jesse Green shoots commercial, wedding and lifestyle photography from Detroit and Leelanau County. jessedavidgreen.com