Lessons of a Traverse City Cheesemaker 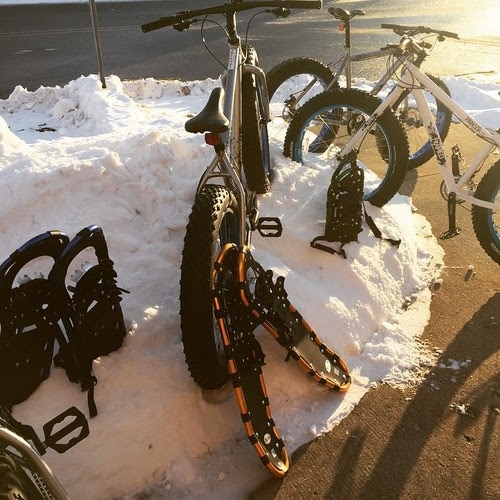 Joy Martin Omar and her husband, Dave, dreamed of starting an artisan cheese company together. In 2019, the couple’s hard work paid off and they founded Saltless Sea Creamery in Traverse City.

If you’d asked my younger self what I wanted to be when I grew up, “cheesemaker” would not have registered as a contender, let alone an identifiable option. A child of the ’80s, I come from a middle-class home where Parmesan was an immortal green can of savory sprinkles for my spaghetti. Our meals were always homemade, rarely fancy and certainly never expensive. This ethos made me an anomaly in my foodie hometown of Ann Arbor, where I didn’t step foot in Zingerman’s Delicatessen until I applied for a job in my mid-20s. Zingerman’s sold food that was fancy and expensive. As it turned out, Zingerman’s would change my life.

My cheese education began in the deli’s retail department, a cheerful but cramped labyrinth of profound sensory overload. The heady perfume of charcuterie garlands collided with the bracing, spore-saturated air of the cheese case, an olfactory assault softened by the warm waft of freshly baked bread. I became enamored with flavor; the peppery bite of new harvest olive oil, the crystalline umami of well-aged Parmigiano Reggiano, the floral fingerprint of a single-source honey. I also fell in love with Dave, the man who would become my husband.

Dave’s connection to cheese was stronger than mine: It was essential and personal. His mother taught him to make jibneh, a fresh cheese common in Lebanese households, just as her mother had taught her. If this tradition from “the old country” impressed upon him the accessibility of cheesemaking, the deli’s expansive cheese counter introduced him to its artistry. Nostalgic affection transformed into professional curiosity, and the seeds of a career were planted.

Zingerman’s was a moment of transition for both Dave and me. Our relationship was brief but indelible; the kind where you imagine plans for the future to avoid the present coming to an end. We both moved on: Dave became a cheesemonger in Portland, Oregon, and I, an aspiring food writer in New York City. When we reconnected after six years apart, we decided to move home to Michigan, where family was close and rents were reasonable. And we crafted the dream of starting a cheese company together.

After a few years downstate, Traverse City emerged as the frontier for our dream, having researched the area’s conservation of farmland—critical for cheesemakers in need of local dairy—and a thriving local food scene. We made the move but found the path to our own cheesemaking company wasn’t easy. Opportunities collapsed; we each had to take full-time jobs. We could have quit, but we rallied to hold on.

Then Sue Kurta called. We’d met Sue, the owner of Boss Mouse Cheese, at her farm market stand earlier in the summer. Sue and Dave hit it off, bonding over their later-in-life paths into cheesemaking. Soon an offer of apprenticeship was made. Like most artisan traditions, cheesemaking is learned by doing. Both art and science, it relies on a cheesemaker’s ability to recognize patterns and repeat processes with an exacting amount of precision. These skills are built through years of experience and would be lost if not passed from one hand to the next. Without the generosity of established cheesemakers like Sue, young cheesemakers would cease to exist.

Read Next: Build the Best Cheeseboard with Expert Advice from Boss Mouse Cheese

We started making cheese in Sue’s creamery whenever we could, squeezing in “make days” around our full-time jobs. While the ingredients of cheese are simple—milk, cultures, coagulant and salt—the most integral and complex component is time. Cheesemakers wait hours for milk to set and months for cheese to age, with no guarantee the investment will prove fruitful. Cheesemaking is a delicate alchemy, susceptible to seemingly infinite variables that threaten to go off the rails in an instant. We quickly learned that making cheese means becoming comfortable with failure.

It’s a dilemma all artists can relate to: The gap between the result you imagine and the one your skills allow you to create. Each batch offered a lesson to be applied to the next, as if the cheese was creating cheesemakers and not the other way around. We’d been making cheese for just four months when we received an unexpected acceptance into the farmers market. It was a moment of pride and panic. Our products were still in their infancy, promising but inconsistent. We worried about presenting customers wither imperfect offerings, feeling a bit like we were turning in a rough draft instead of an edited final piece. Sue reminded us that we had a cave full of delicious cheese that deserved to be enjoyed. She was right.

In just over a year, Dave and I created a life we used to only dream of. It’s been an obstacle course of false starts and blind leaps; each victory built on the foundation of defeat, every rebuff erased by enthusiastic support. We’ve been welcomed by a community and built a home in this water-lapped, pine-lined corner of our home state. We enter our second year of business bone-tired and hearts full, more certain than ever we are exactly where we belong.