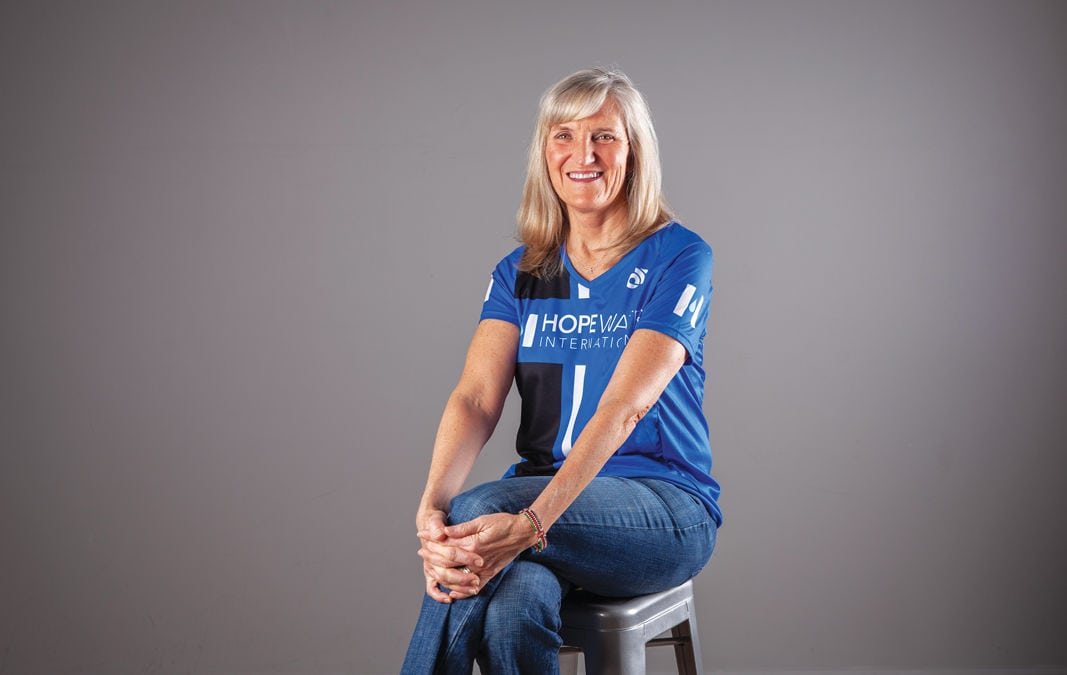 Carol Brown’s life changed when she lost her mother in December 2011. As she navigated her grief, she found herself searching for something more, something bigger. And she found it, in the most unexpected way: In running shoes … and running water.

She was living in Troy when her church group was challenged to raise money to build water wells in Kenya. Carol was interested, but the fundraising was based on signing up for, training for and running the Chicago Marathon.

The first problem: Carol was not a runner. The longest she’d ever run was maybe two miles, tops. But when she learned about those in need in Kenya—women and children who walked miles each day to fill tubs with dirty water (weighing 45+ pounds) and carrying them home on their heads, her “problem” seemed laughable.

Now, eight years later, that group is a non-profit called Hope Water International (HWI). They have raised $3.7 million, and installed more than 150 water wells in Africa, with teams all over the Midwest participating.

Carol, 59, brought Hope Water International to Traverse City three years ago when she moved Up North after retiring. She started a local team and members have run the Sleeping Bear and Bayshore Half/Full Marathons and/or the Traverse City 70.3 Ironman, with more to come this year.

The Running (And Walking!)

“It wasn’t until I learned, and became passionate about, ‘running with purpose’ that my mileage increased, and I considered myself somewhat of a runner,” she says. “I am not competitive and not fast, I am just grateful that I can.”

The group follows an 18-week, “very gradually built-up” training plan, running (or walking!) two to three times during the week on their own or with a friend, and then gathering on Saturday mornings to run their longest mileage of the week.

“We are ordinary folks who share a passion,” Carol says. “But I also know that it is ordinary folks that God uses to get stuff done! With our weekly gatherings, we form lasting friendships and become like family. Saturday mornings have become my most cherished day of the week—inspiring, encouraging and energizing.”

“You put a lot of people together, each doing a little, and much happens!” Carol says. “Each year I send out support letters and explain what I am doing and why. I have never been one who is comfortable asking for money, but also realized I am not raising money for self-serving purposes, but rather for those lacking the most basic necessity of clean water. And each year I am blown away by the people who choose to contribute.”

And, as Carol continues her work with HWI (which is run by volunteers, she notes, and there are no salaries, including for Executive Director Bill Clark), she believes that she’s in the right place at the right time. “I struggled for a very long time and questioned, ‘Why can I walk 10 feet to the nearest sink and get clean water any time I thirst, while other must walk hours in search of filthy water?” she says. “I came to realize that it’s not about ‘what’ you have, but rather what you ‘do’ with what you have.”

In her time building HWI, Carol has had the chance to travel to Kenya and experience a water walk firsthand. She found she could not carry the water without help from the local women; a shocking moment, she says. Her husband, two daughters and son-in-law are also involved with the efforts, and she is looking forward to growing the Traverse City team with others who are also looking to do something “bigger.”