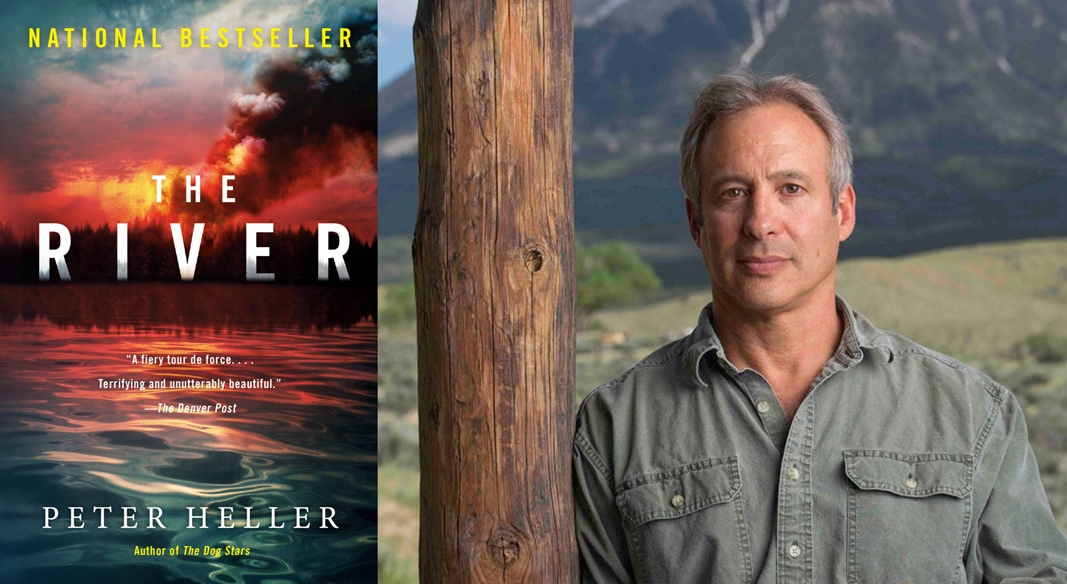 The National Writers Series is welcoming author Peter Heller to the City Opera House stage. The Traverse City event is set for Thursday, March 5. Heller is a longtime contributor to NPR, and a former contributing editor at Outside Magazine, Men’s Journal and National Geographic Adventure.

Guest host is Peter Robertson, a Scottish-born book reviewer now living in Chicago. Doors at the City Opera House open at 6 p.m. for music, Morsels and a cash bar. The stage event begins at 7 p.m., followed by a book signing in the lobby. Books will be available for purchase with a 30 percent discount from Horizon Books. Tickets are available from the City Opera House.

Peter Heller writes what he knows. He knows paddling, fish, rivers, currents, weather, mountains—all of which are integral in his latest book, The River.

The paperback edition of The River comes out March 3; the book was just nominated for an Edgar by the Mystery Writers of America.

In real life, the river in the book is Canada’s Winisk, which empties into Hudson Bay. Heller got an assignment to run the river and went with a woman he’d just started dating. The spontaneous invitation was prompted by her heavy gym bag. “I said, ‘What’s in there?’ and she said, ‘Weaponry.’ She had throwing stars and nunchucks and filed off chopsticks,” Heller says. He figured she was useful, so despite her lack of canoeing or camping experience, he invited her on the trip.

Heller likes surprises, so a river that isn’t very well-charted is fine with him. The Winisk—and the Maskwa in the book—aren’t run very often and there are only a few scattered trip journals that detail rapids and portages and waterfalls. “But it changes every year,” Heller says of the river, so whatever details there are may already be obsolete.

The friendship at the heart of The River is true-to-life as well. Jack and Wynn, the paddling protagonists in book who meet during freshman orientation, are a lot like Peter Heller (Jack) and artist Jay Mead (Wynn). In The River, Jack is a rancher and “a hundred times tougher than me,” Heller says, but has a similar attitude, “an underlying skepticism.”

The book is scary. There are scary people and scary nature and scary injuries. But the writing is so wonderful—and calming—it makes it a joy to turn the pages. The New York Times says it uses “prose so vivid and engaging that a city-dwelling reviewer can feel the clammy cold of a fog over a river or the heat of subterranean tree roots burning underfoot in the aftermath of a fire.”

The River is being optioned for a movie, Heller says, but he has no desire to write the screenplay. He has to leave the stories once they’re written, he explains. “It’s why I don’t even narrate on audio. Once I write the book … I want to move onto the next story. I get so transported and immersed. Jasper (in The Dog Stars) feels like a dog I own. The River feels real to me. It lives in me like something that really happened. The emotional impact feels real. I don’t want to relive it again. It was rough.”

Heller is “just a Knopf novelist now,” not writing for any magazines besides a few Travel + Leisure stories because “they’re fun.” He was in New York City for the memorial service for Knopf publisher Sonny Mehta when we talked for this interview. Heller grew up in Brooklyn Heights and still has family there. His mother, on whom Celine was based and who died three years ago, lived in a house on a dock under the Brooklyn Bridge.

“It was the nicest space in New York,” Heller says. There were 10-foot windows that overlooked the Brooklyn Bridge and you could walk outside and hear every language spoken. “It’s like living under Big Ben. It’s iconic.”

The family sold the house last year. “It was rugged,” Heller sighed.