A Visit to This Classic Manistee Barbershop Will Inspire You 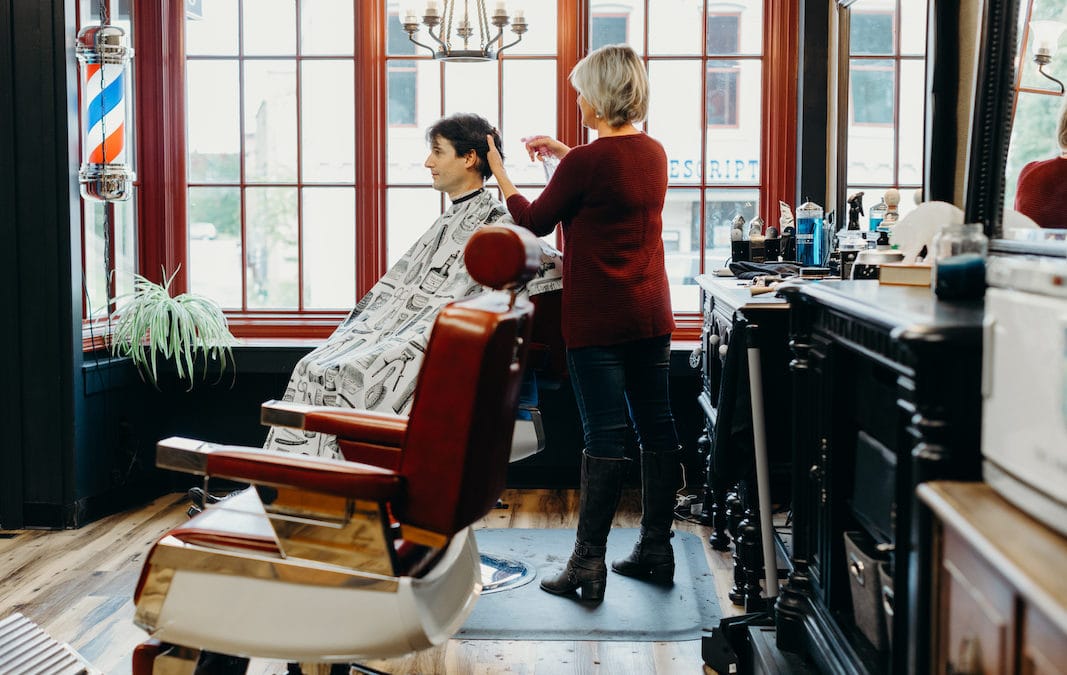 Ready for a fresh cut and a good story? Here’s one with a snip of hope, an unexpected prize and the serendipitous beginning of a Manistee barbershop. We visit J. Catlett & Company.

Featured in the February 2020 issue of Traverse, Northern Michigan’s Magazine. Get your copy.

I arrive in a town that’s coming back to life. The revitalization of Manistee, a portside town in Northern Michigan known for its fishing and lumber industries, is well underway with 150 businesses in the downtown area alone. From the north, the historic ship, the SS City of Milwaukee, greets visitors first. Farther along, I’m stopped by a Marquette Rail train going through town, long-long-short-long, sounding its crossing with a load from the Morton Salt company. While locals cut up a side street to beat the train, I wait at the crossing, taking in the sight of a living, breathing town hard at work. 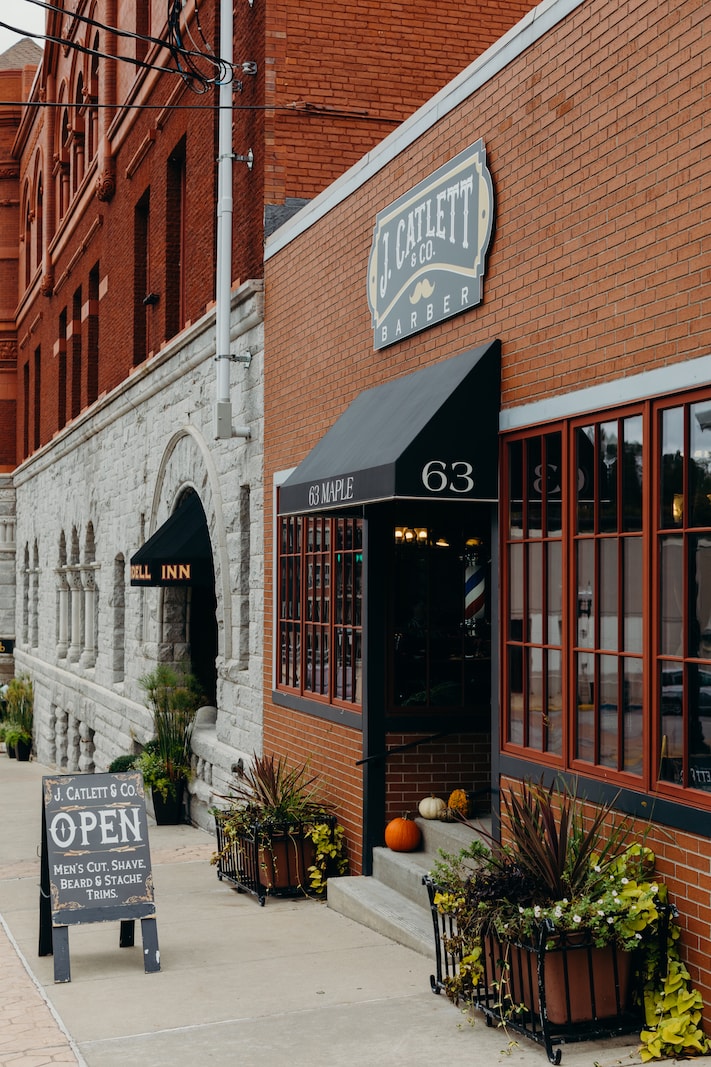 Jamie Catlett keeps clipping. “Off the ears, clean it up?” she asks the man in her chair. I tuck into the far end of the dark couch. Jamie offers me a quick hello, but keeps her eyes on her work. “My wife usually cuts my hair, but Jamie’s my back up,” the man, John, tells me.

Long pause. “Plus, she offers me a beer when I want it!” In the corner, stands a water cooler and next to it, a mini fridge with Coca-Cola, Goose Island Brewing Company’s 312 ale from Chicago and what looks to be a salad for Jamie’s lunch. The caribou stands watch over it all.

The vibe is understated and warm. There are old-timey barbershop signs, a vintage picture of Jamie’s great-grandfather and his five brothers, dapper, in formal attire from the early 1900s, and black and white capes for her clients printed with images of vintage barber tools. These are small touches, and Jamie’s shop is filled with them.

Carl is in her chair now. He’s young, and he’s got his phone out showing Jamie what he wants.

“Men chat just as much as women,” Jamie says. “They just talk about different things. I hear it all—where the salmon are running, road construction, sports and when the kids are going off to college.”

She stops and holds her shears in the air. “And some stuff, I’m gonna have to take to the grave!”

Just a few years ago, Jamie was living an entirely different life. She was fundraising for a women’s shelter in Ludington, loving her job, married and raising her daughter. But in 2016, Jamie went through a divorce and moved to Manistee to be near family.

“I always loved styling hair, so I went back to school,” she says. “I needed a new career where I could support my family quickly.”

Jamie drove 1.5 hours each way to Traverse City to attend school, sometimes not getting home until almost midnight, all while also working as a retail store manager.

“Going back to school at 36 was scary. The women were all in their late 20s. But it was so much fun. The girls were amazing. That camaraderie gave me confidence, and I realized that, OK, this is definitely something I’m going to do!” 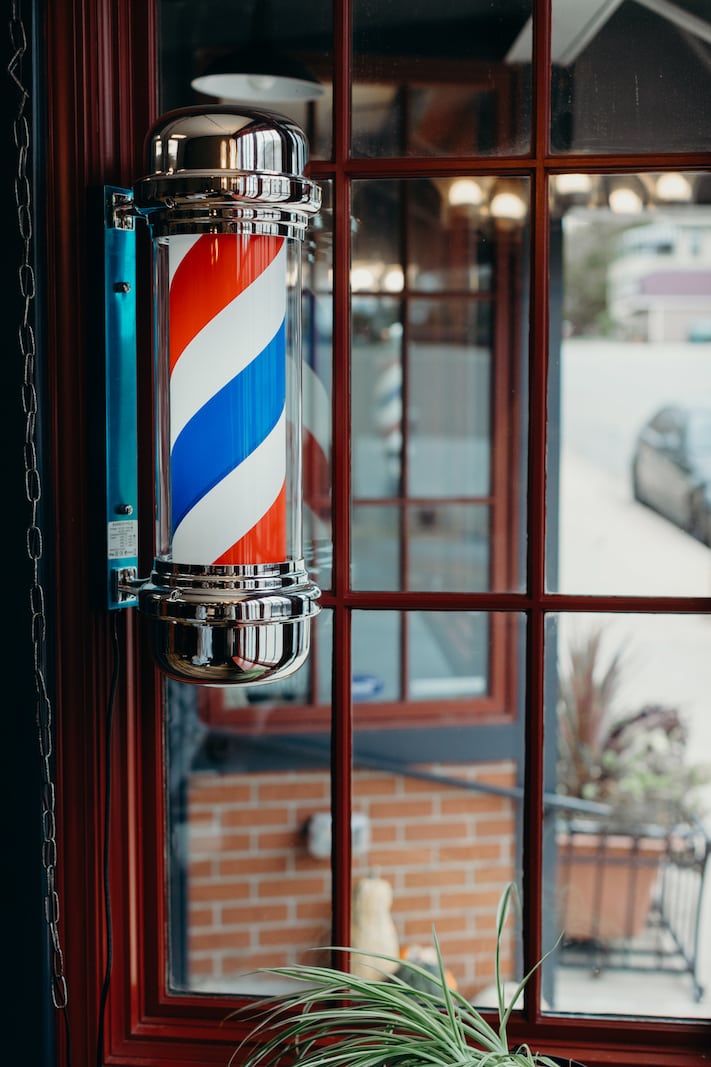 The certification took 18 months, and she was hired, unexpectedly, by a barbershop in Traverse City before she even graduated. Jamie hadn’t set out to be a barber, but after being recruited, she was on a new path.

“Barbers are hard to come by and they asked me to join them,” she says. “I worked with four other barbers at Bulldog’s Barbershop, and I loved it.”

It was another year before a fateful meeting changed her life again. “I was visiting my mother in Manistee and ran into a friend who told me about the Spark competition,” Jamie says. “It was two days before deadline.”

Each year, the Manistee Downtown Development Authority awards a $5,000 grant to “spark” a new business. Jamie quickly turned in an application for the 2018 competition.

She was shocked to learn she was a Top 5 finalist. She had moved to Traverse City at that point to work, but she spent the next four months submitting business plans and projections for her dream job in Manistee.

Then, in August 2018, Jamie won the competition.

She suddenly had seed money for her own barbershop, along with several in-kind business donations and services provided by Spark Manistee. It was a life-changing gift.

“Hello, Father Pablo.” The door brings in her next client, along with the cut of winter’s chill.

I realize that the quiet, calm atmosphere in the shop is a cover-up. It may be a place to relax for Jamie’s clients, but from where I sit perched on her signature black couch, Jamie is moving nonstop, on her feet, working the chair at all angles, scissoring, combing, sculpting. Yet, somehow, her constant movement is almost undetectable. She takes her time with each client, but there’s a clip to it, no pun intended.

I realize it’s the secret ingredient: She’s personal, but she’s professional, too. “Jamie’s the only one who can do a skin fade,” Father Pablo tells me, running his hand up the back of his neck.

A skin fade? I gotta see this. Jamie is using an electric razor to fade his hair down to the skin at the back. “Most people can’t cut ethnic hair,” he says. “But when this place opened, the owner of the Manistee Beverage Co. said Jamie can do it. I said, I bet she can’t. But I called her up—and she can.”

Jamie does’t say much. She’s not embarrassed by this praise, but she’s not overcome by it either. It’s just what she does. “I travel to shows in Las Vegas and California so I learn how to cut all kinds of hair,” she says. “There’s diversity at the shows, but there’s diversity in Manistee too. People are from all over here.” 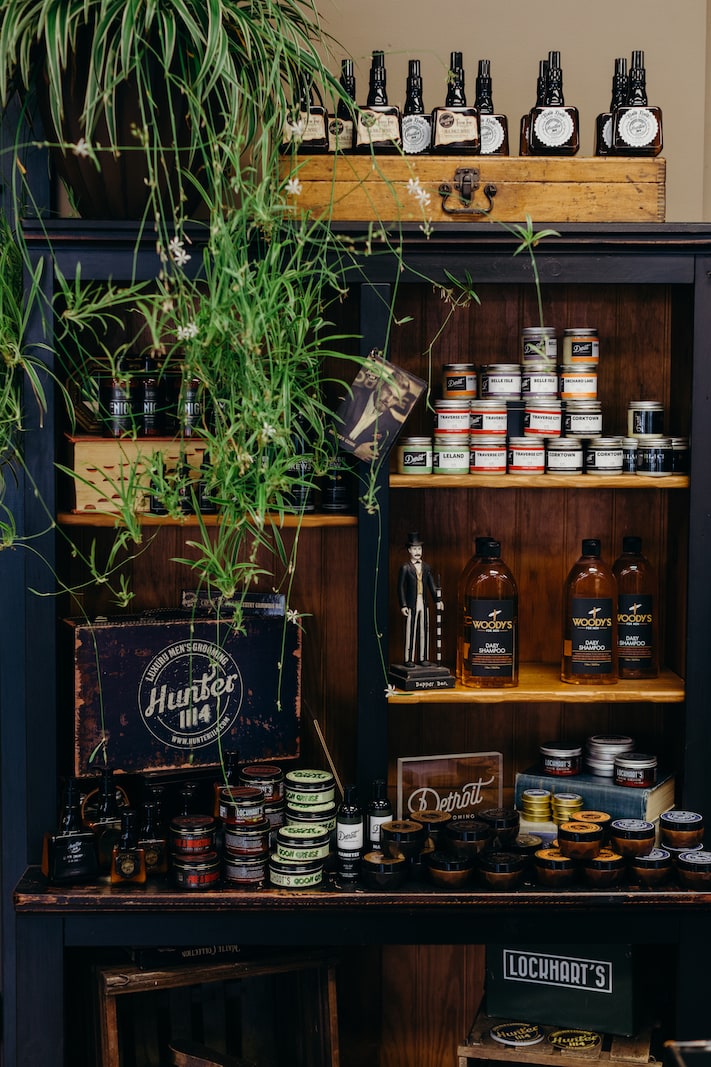 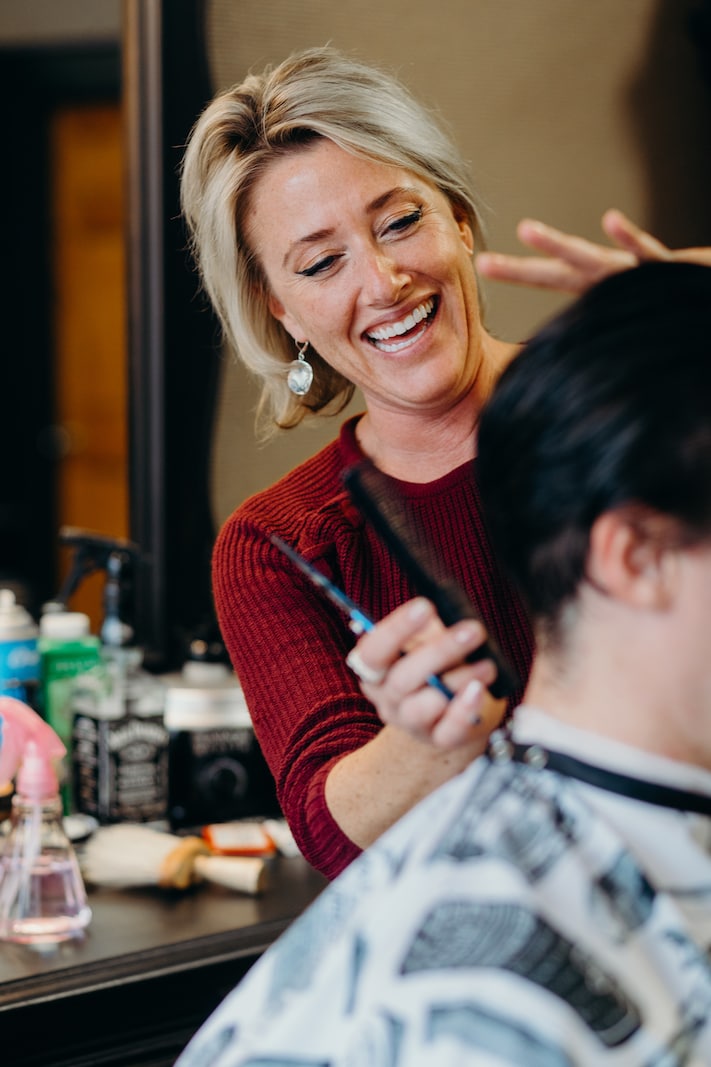 Father Pablo is a priest with the Divine Mercy Parish in Manistee and also does outreach at the Catholic schools. He tells me with glee: “Now the third graders come in here and tell Jamie, ‘I want a Father Pablo haircut!'”

“Lucy in the Sky” is playing above our heads, followed by “Hotel California.” She hums to the music, a bop in her step that wasn’t there before. Her happiness is quiet, but it’s showing.

“Yes, people doubted me,” Jamie says. “Some friends said, you’re risking everything, you’re moving to a place, you’re not sure you’ll have clientele, what will it even look like? They warned me. But I just KNEW. I knew I was going to make it a success, no matter what—I have that about me—if there isn’t a way, I make a way. No matter what.”

And more motivation came from wanting to raise her daughter, Nancy, now 14, in a small town, near family.

“It was serendipity that this business opportunity came my way,” Jamie says. “Manistee is quite charming and has a small-town vibe to it. The businesses downtown are vibrant, plus, my dad always said that the fishing was better in Manistee!”

Bills in her chair now. He’s quiet. Jamie tells us that her daughter comes in to help sweep the shop after hours. I see the twosome recently posted a video on Facebook, for a lark, of themselves dancing after hours at the shop. “I close the shop whenever Nancy needs me,” Jamie says. “I go to all of her swim meets. I don’t miss things anymore.”

Bill, at last, speaks up. “Going to a swim meet for your kid,” he says, “people respect that.” He doesn’t say anything else. It’s exactly enough.

A new father, Jordan, comes in with his baby boy.

The baby’s name is Jack, and his first birthday is tomorrow. His mother pokes her head in to check on her two guys before leaving. When the door shuts, Jordan tells me with a smile at the floor, “Jamie does my hair now because my wife got sick of cutting it at home.” Jamie doesn’t react. Instead, she sweeps the floor and dusts the chair, pausing to admire baby Jack. 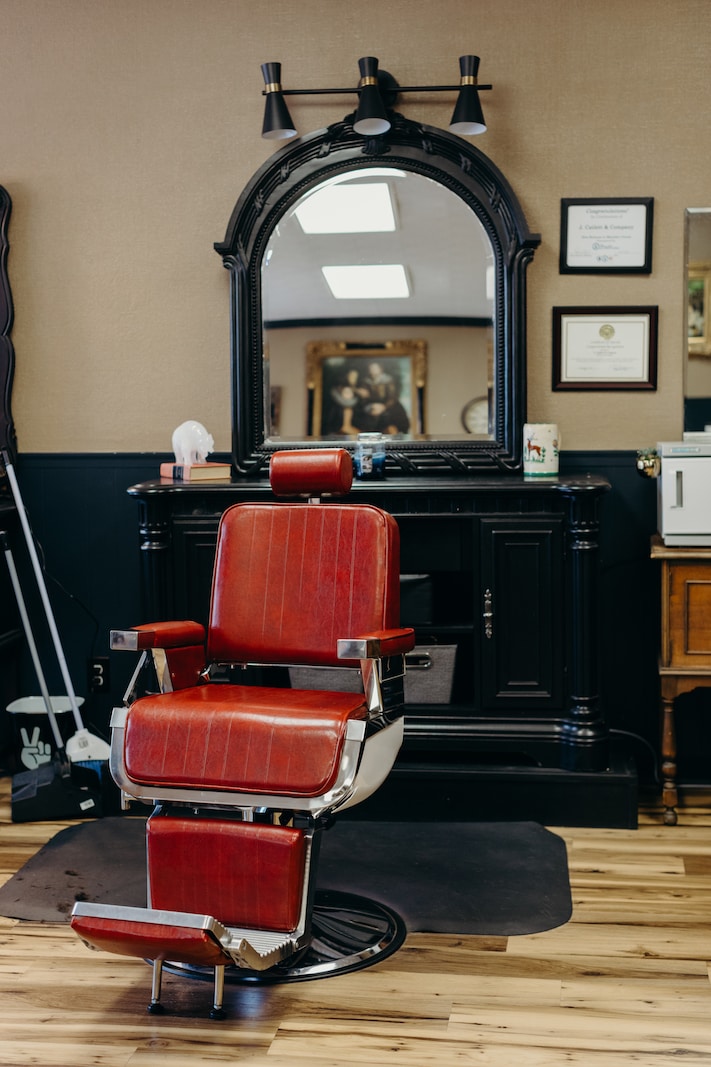 “He’s getting big,” she says. The same could be said about Jamie’s own baby, J. Catlett & Company. She just added a second chair and is hoping to hire a barber to work beside her. “Build it, and they will come,” she says.

She’s proof that the old adage is true. I’ve seen what she’s built at her Manistee barbershop. A meeting place for all walks of life and all ages. A place to get a haircut, a beard trim or even a facial. (Yes, men do get facials, Jamie says, especially the guys who work in the salt factory.) And even a place to get a mullet. They are making a comeback in the 20-something crowd, Jamie says, “Yes, mullets!” she insists when I object.

I gather my things to leave. In the space of just one morning, at the new little spot at 63 Maple Street, I’ve seen, with clarity, a slice of everyday life in beautiful, growing Manistee.