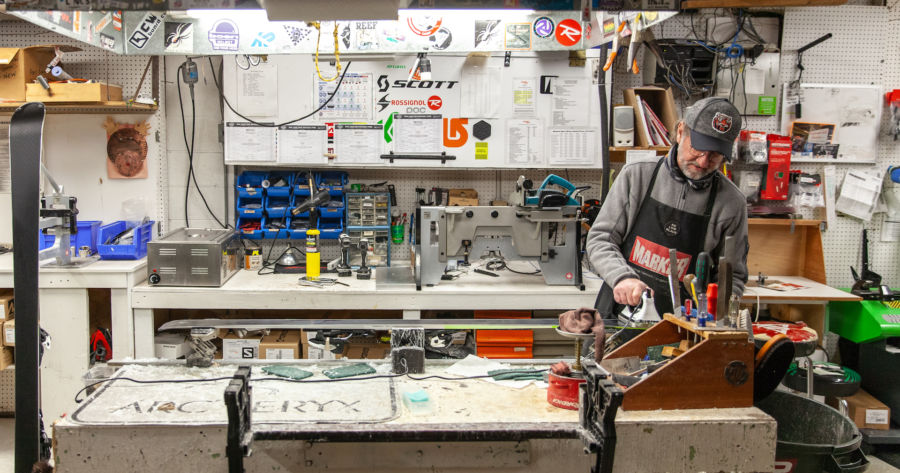 Bahnhof Sport is more than just a ski shop in Petoskey, it’s a community, thanks to Scott “Scooter” Stillings. The Northern Michigan ski pro is known as an ebullient soul with a big heart.

Scott Stillings has worked at almost every resort Up North during his 50+ years in the ski industry, is certified by the Professional Ski Instructors of America, done weather and ski report radio gigs across the Midwest and was the founder of Nub’s Nob’s ski school.

He’s witnessed the evolution of Northern Michigan’s ski culture from its start. In the early days of snowboarding, when it was considered radical and dangerous, Scott and his buddies headed to a steep set of sand dunes next to US 131. “We were crazy,” Scott says, drawing out the last word. “We were rascals with inadequate equipment.” (Which he doesn’t recommend now.) While Northern Michigan doesn’t have massive mountains, Scott believes it’s the people and the community that makes our state a great place to ski. He knows virtually everyone in the local ski world, pausing mid-interview to greet friends on the street, “Hi! How are you? I love you! I love you with all my heart!”

Chuckling back to me, “Sorry, I’m downtown signing autographs and kissing babies.”

Scott says he remembers every kid who comes into the store. “Every kid. I mean it. What kept me alive in the whole game are kids and making vacations, unquestionably.

So, what does Scott do on his time off? He sleeps. “If they had Olympic sleeping, I might not win the gold, I don’t want to presume, but I’m on the podium. I could be an Olympic champion,” he says.

Before you hit the slopes this winter, stop by Bahnhof Sport and say “hey” to Scott. (Friends call him Scooter, and everyone’s a friend.)