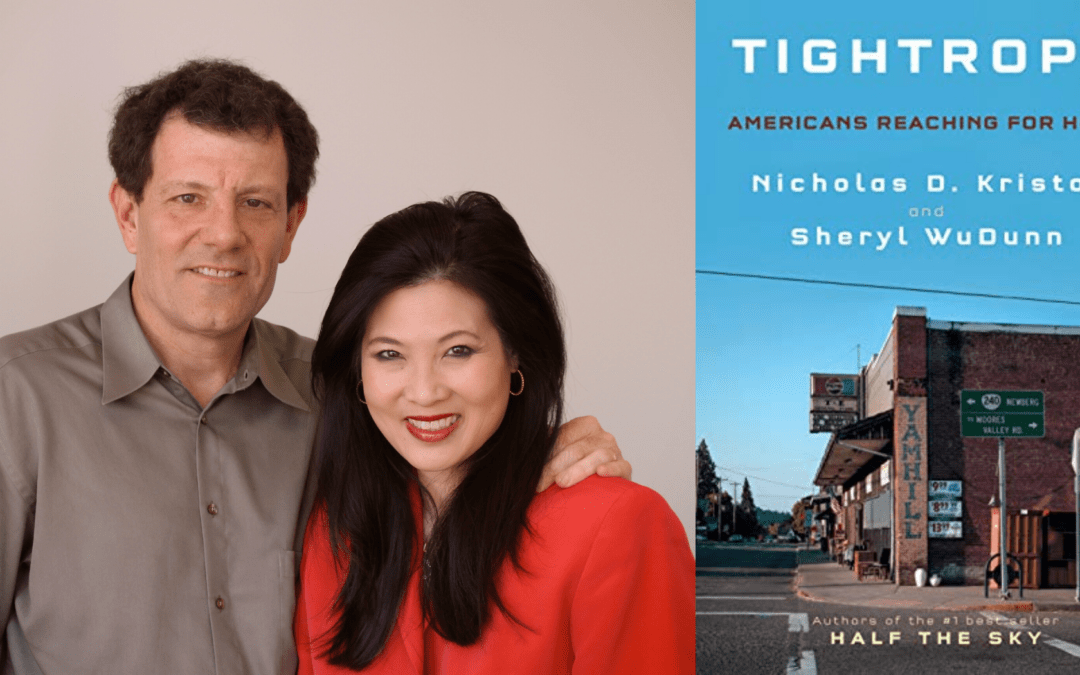 The Traverse City National Writers Series is kicking off its 10th season with Nicholas Kristof and Sheryl WuDunn, authors of Tightrope: Americans Reaching for Hope, on Friday, January 31. Tickets to the Northern Michigan event are available through the City Opera House and include a copy of the book.

Bits of Yamhill, Oregon, where Nicholas Kristof grew up, sound like bits of Traverse City. There are fruit farms, for instance. Cherry orchards, but not as many as before, with many being replaced by grapes or apples for cider, as Kristof’s family is doing on their farm.

“Even in Yamhill I think some of the problems are invisible to some,” Kristof says. “If you own a winery, you’re completely oblivious to a lot of struggles to other residents.”

Kristof, a New York Times columnist, and Sheryl WuDunn, his wife and fellow Pulitzer Prize winner for their coverage of Tiananmen Square, travel the world, reporting from areas of extreme poverty, corruption and violence.

“I used to always tell people that the problems abroad are hard to imagine if you haven’t seen them,” WuDunn says, “but then we started learning more about some of the people we were writing about and we realized the pain that people feel is reflective of what the human condition can bear.”

And they also realized a lot of what the human condition can bear is right in their backyard.

Kristof grew up in Yamhill, where his mother still lives on the family farm. On his many trips there, it was frustrating to see many of his high school friends falling on hard times—job losses, health issues, accidents, addictions. The human condition in Yamhill was way too similar to the “crisis we were seeing abroad,” Kristof says. “If humanitarian crises are news in Sudan, then why aren’t they here?”

The issues his childhood friends were encountering weren’t rare, the couple noticed. In fact, the working class all around the country was dealing with them—and feeling ignored. “There’s kind of a blind spot,” Kristof says. There are lots of conversations about the lower class, he explains, but not the middle class. “There’s more about college, not as much about high school.”

Tightrope: Americans Reaching for Hope is called “a deft and uniquely credible exploration of rural America, and of other left-behind pockets of our country,” says Tara Westover, author of Educated.

Kristof and WuDunn write about multiple issues—education, addiction, health care, the justice system—and what’s being done to help now, many times by underfunded community groups. “This is not an exclusively liberal or conservative issue,” they write. In the chapter about “How American Went Astray,” there are references to the Homestead Act of 1862, rural electrification, free basic education and the social programs that began in the 1930s. “Then, in the 1970s,” they write, “ … America went off track, beginning a nearly half-century drift in the wrong direction.”

The results, especially when seen through the working class, have been harmful, Kristof and WuDunn believe. They include income inequality, deterioration of public education, deregulation and the weakening of labor unions, the War on Drugs and a “working-class stagnation” that has “fed polarization, racism and bigotry,” they write.

Kristof and WuDunn list “Ten Steps You Can Take in the Next Ten Minutes to Make a Difference.” They range from mentoring to advocating to volunteering. They also suggest “blazing your own path” and include the farm in Yamhill as an example. “Cider and pinot noir will employ more people than other uses of the land.”

Political candidates need to embrace social responsibilities, they say, although, of course, words—and issues—matter. “Hillary Clinton said we’re going to shut down the coal industry,” WuDunn says. “How does that make those families feel? She didn’t mean it that way. She should have stressed the tools and retraining they would need for this new economy.”

Kristof and WuDunn are big on the benefits of early childhood education (with the data to back it up, of course) and think it could be easy to pitch to the electorate. “Preschool for all is very powerful,” WuDunn says. “There’s a streak of anti-intellectualism so ‘college for all’ is seen as elitism but ‘preschool for all’ is harder to argue.”

“Historically we have overcome,” Kristof says. “More than a century ago with the populist movement and again in the Great Depression, there was enough desperation that led to change.”