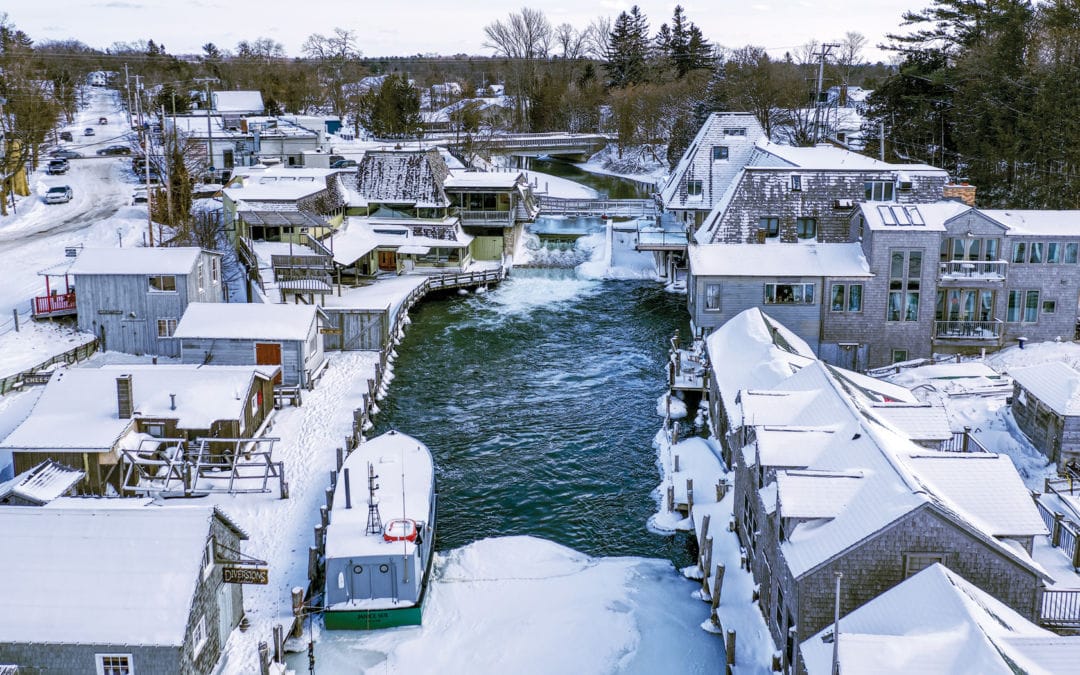 Leland’s historic Fishtown has survived Lake Michigan’s mighty storms and changing water levels, thanks to the passionate work of the Fishtown Preservation Society, but the Northern Michigan nonprofit needs your help.

In 2019, record-high water levels threatened Fishtown, rising over docks and flooding several shanties, including The Village Cheese Shanty. The sandwich shop is still sitting on the original concrete slab it was built on while some of the neighboring shanties were raised in 1986, when water levels were also high.

Thankfully, the Fishtown Preservation Society has been preparing for these challenges, says Executive Director Amanda Holmes, though the nonprofit still needs community support to implement the projects and address issues Fishtown is currently facing.

“Fishtown Preservation has spent the last five years preparing to fortify Fishtown against the impact of waters, high and low,” Amanda says. “The plans include work on Fishtown’s infrastructure, replacing the docks and rehabilitating three shanties—the Morris Shanty, the Village Cheese Shanty and Carlson’s Fishery.”

The Morris Shanty is Fishtown’s oldest building. It’s been in continuous use for commercial fishing for 117 years. The Cheese Shanty building was constructed and first used by commercial fishermen in 1958 and sustained extensive water damage in 2019. Carlson’s, while not suffering specifically from high water damage, is up against time and exposure to Lake Michigan elements.

“Fishtown is on the National Register of Historic Places as part of the Leland Historic District, so how we care for Fishtown and its working waterfront matters,” Amanda explains. The focus also remains on keeping Fishtown open and accessible, the boats fishing and the history alive.

“The sudden rise of the lake levels has made our plans more urgent and more expensive,” Amanda says. However, despite the added pressure, she remains positive.

“Fishtown is here today because there have always been people here to ensure its survival. In the past, it was the fishermen and their families who looked after Fishtown. Since 2007, Fishtown Preservation has cared for the core historic parts of the community, as well as the commercial fishing operations and the vessels Joy and Janice Sue. After 13 years, our goal each day continues to be driven by one purpose—to preserve this irreplaceable place.”

Update: The Fishtown Preservation Society is set to lift one of its historic shanties this week out of danger from the high water of Lake Michigan. As of today (January 7), staging is set for the Village Cheese Shanty to be lifted by crane and moved to the Leland Harbor parking lot, so its failed and flooding foundation can be replaced. The shanty will be moved this week, as early as Wednesday morning, but the exact date and time remains contingent on the weather. When Fishtown Preservation is alerted the project is a go by the construction crew, they will post this information on Fishtown Preservation’s Facebook page: Fishtown Leland. Visitors are welcome but will only be allowed in authorized locations.

The shanty that now houses the Village Cheese shop was built in 1958 by Louis Steffens for his commercial fishing operation and his then new vessel, the fishing tug Janice Sue. The wood retaining wall and concrete foundation failed over the years, and recent high water has washed away the soil beneath. The new foundation will be constructed of sheet pile and concrete. After the foundation is rebuilt the shanty will be moved back to its original location.

Building contractor, Bob Biggs of Biggs Construction, says that doing this work in the winter is a challenge, but understands that work in Fishtown can only happen in the off-season, when the FIshtown businesses are closed. He and his crews are also eager for the Village Cheese Shanty to be able to reopen in the spring. Owner of the Village Cheese Shanty Dave Kareck says that he has no plans to change anything inside of the shanty, so it will look just like his customers remember, but without the flooding of the summer of 2019.

The site projects are to be funded by the Campaign for Fishtown. The project construction and materials costs are estimated at $2,500,000. At this time a total of $950,000 has been raised. $570,000 of these funds are from a challenge grant from the Jeffris Family Foundation and Giving Tuesday. The Jeffris Family Foundation offered Fishtown Preservation $160,000 toward work on the shanties if Fishtown Preservation could raise $320,000 to match it. This goal was met in August 2019. Giving Tuesday challenges on December 3 2019, resulted in nearly $90,000 in gifts given by 392 individuals.

Read Next: In 1971, a Local Fisherman Saved Leland’s Iconic Fishtown