Tahquamenon Falls State Park is a Michigan Treasure. How Was it Created? Today, the Tahquamenon Falls are among Michigan’s most photographed places. But prior to becoming the premier attraction at Michigan’s second-largest state park, the falls were known only to locals.

Native Americans, missionaries and fur traders were once the only people to witness the 200-foot-wide, tannin-stained Tahquamenon River tumble over a 50-foot sandstone ledge north of Newberry.

In 1840, Michigan’s famed state geologist Douglass Houghton canoed up the Tahquamenon River to the Upper Falls. He noted signs of native life along the river, including well-worn portage trails and a large clearing near the Lower Falls likely used for farming.

Houghton wrote in his journal, “the route bears evidence of being frequently traversed … for the portage path is deeply worn and there are remains of Indian lodges at both ends. The Indians residing upon the banks of the Tequoimenon formerly numbered vastly more than at the present day.”

Read Next: 10 Best Things to Do at Tahquamenon Falls State Park

Henry Wadsworth Longfellow took creative license in describing the origin of the amber color of the river in his famous 1855 poem “The Song of Hiawatha.” According to Longfellow, the mighty Gitche Manitou called a great peace conference somewhere in the territory that is now northwestern Luce County.

Warriors from tribes across the country met and listened to Gitche Manitou, as he pled with them to forget tribal quarrels, throw away their war hatchets and wash in the clear water. The warriors leapt into the river and washed the war paint from their faces so that the stream was colored orange, brown, black and blue—and the river runs with these colors to this day. Survey work of the great swamp of the Tahquamenon began that same year. William Austin Burt and his crew traversed the area throughout two summers, marking the township and range lines. Clouds of mosquitoes swarmed the men, who resorted to covering their skin with a mixture of pulverized charcoal and grease.

“This is the best remedy that I can find against the flies,” Burt wrote in his journal.

This difficult work laid the foundation for the upcoming logging operations that would continue for the next half-century. Early timbering operations relied on hearty lumberjacks, swinging axes, crosscut saws, teams of oxen and ice roads to haul the logs to the edge of the Tahquamenon River.

Once the snow began to melt and the river swelled, logs were slid into the water and floated toward the sawmill at Emerson—a small town situated near the current state park’s Rivermouth boat launch, located 5 miles south of Paradise. Several small communities—such as Deer Park, Shelldrake and Dollarville—developed around sawmills and lumbering operations in the Tahquamenon River area, though Emerson was most notable.

The village was founded by Kurt Emerson, a lumberman from downstate Michigan. Emerson built a sawmill, which he sold in 1884 to the Chesbrough Lumber Co. The Chesbrough sawmill, which was powered by three steam engines, could cut up to 125,000 board feet of lumber per day.

Emerson consisted of 30 houses, a company store, post office, boarding house, blacksmith shop and school. The village was isolated; all supplies came in via boat once every two weeks. In 1891, a 16-mile-long road was cut south, connecting Emerson to the train station at Eckerman, which provided a connection to the rest of the Upper Peninsula. This road is now M-123, a paved state highway providing year-round access to Tahquamenon Falls State Park for more than 600,000 people each year.

Video: View the Majesty of Tahquamenon Falls in the Upper Peninsula 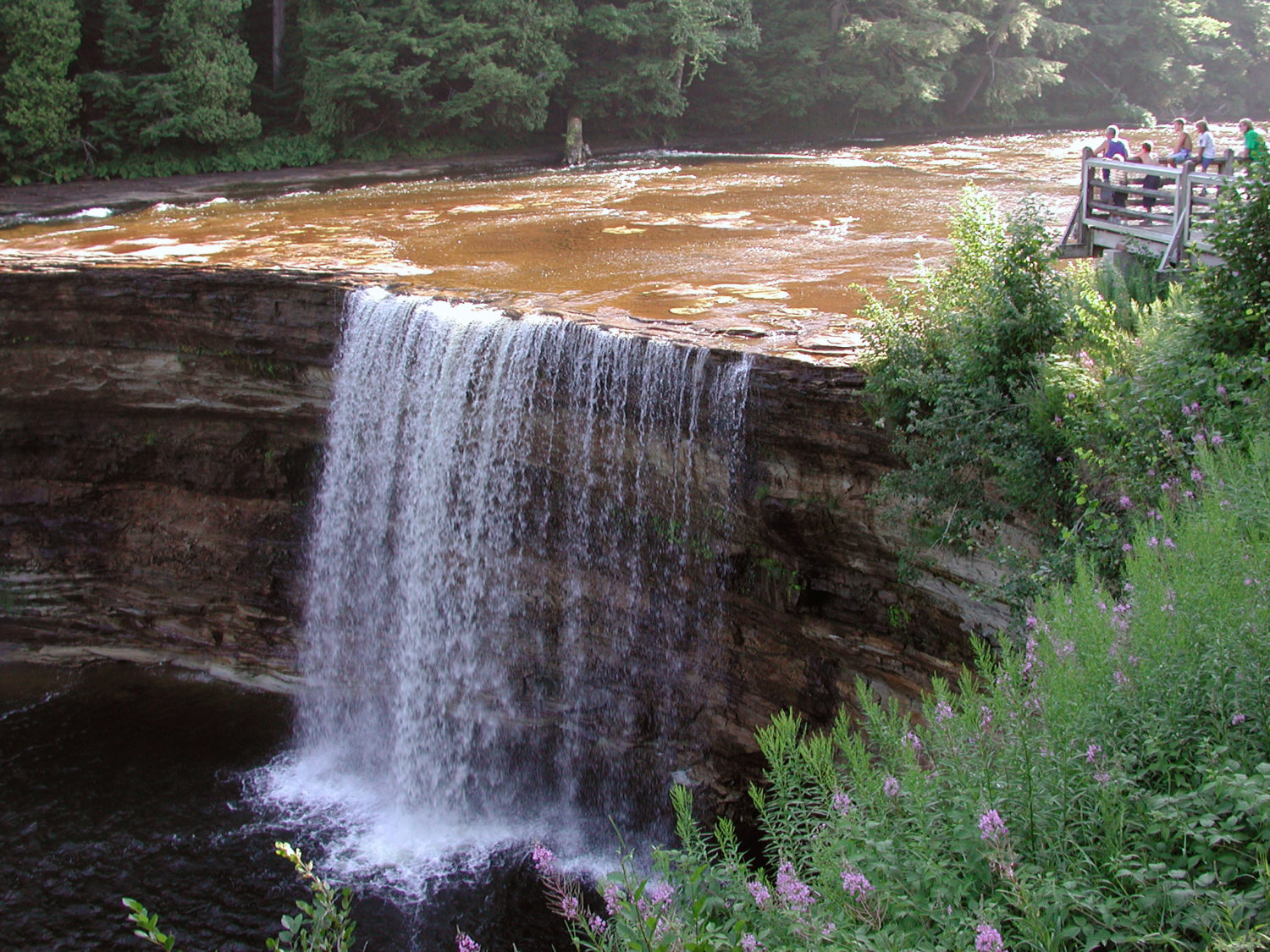 In the early 1900s, the timber industry began to fade, as most of the big pines were gone. Small communities near the towns of Paradise and Newberry began searching for another way to make a living and livelihoods shifted to commercial fishing.

It wasn’t until a group of six men successfully snowshoed to the Upper Falls in 1929, and published photographs with their story, that Tahquamenon became better known. The group included outdoor writer and photographer Ben East, who spearheaded the effort.

“The party snow shoed approximately 50 miles, part of the trip being made on the ice of the river,” reported an article from The Escanaba Daily Press in 1929. “The photographs of the upper and lower falls being the first newspaper pictures to be taken of the falls in wintertime.”

Newspaper articles from 1935 showed an interest by local community leaders to set aside land for a state park. These small locales sought to prosper from the beauty of the Tahquamenon Falls and tourism. However, an article that year from The Escanaba Daily Press detailed a concern expressed by some residents. “Running a road in to the falls before a state park is established … is likely to result in despoliation of one of the state’s most scenic areas,” the newspaper said.

Community leaders held public meetings to rally support for driving tourism to their areas through the creation and development of a state park that would be the key attraction.

An article in the Newberry News argued that “the people should own the Falls and a large tract around it.” In a 1938 article, Carl Clarke of Emerson was quoted as saying, “summer travel in Paradise can be largely increased if we can provide better facilities.”

In 1936, 2,200 acres around and including the Upper and Lower falls, owned by the Cleveland Cliffs Iron Co., was put up for sale. The State of Michigan did not have the funds to purchase the land, so the U.S. Forest Service agreed to buy it for $198,000. The Forest Service then agreed to trade this coveted piece of property for state-owned land within the Manistee and Huron national forests in Lower Michigan.

In 1937, a prominent businessman from Detroit gifted more than 2,000 acres of land to the State of Michigan to be used for public recreation. This area, now known as the Rivermouth, provides public access to the Tahquamenon River and Whitefish Bay via a Michigan Department of Natural Resources boating access site and campground.

Other lands were acquired through gifts, tax delinquency and exchanges. In January 1947, the Michigan State Parks Commission officially dedicated 17,000 acres as Tahquamenon Falls State Park. The park has since grown to include more than 49,000 acres and continues to attract visitors from around the world.

While small improvements have been made over the years, the core concept of keeping the falls wild and undeveloped has remained. The views of the Upper and Lower falls are essentially the same as they were generations ago, when those dark, tannin-stained waters were gazed upon by Native Americans and early explorers.