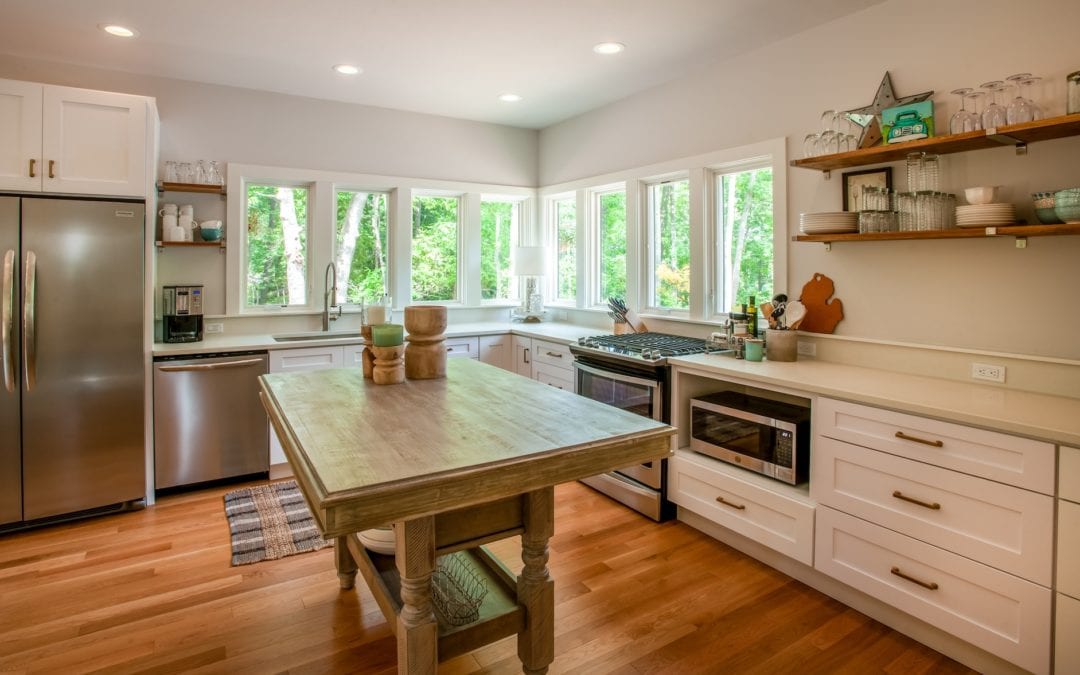 Disclaimer. I live across the street from this house and watched the For Sale sign go up last summer on what was a wooded lot. Then I watched the sign go down. Next, up went the builder’s sign … like anyone else who loves their daily view I watched with bated breath wondering, What would be built in my kitchen window’s sight line. Would it fit in with our little lakeside town that is scattered with small clapboard turn of-the-last-century buildings? 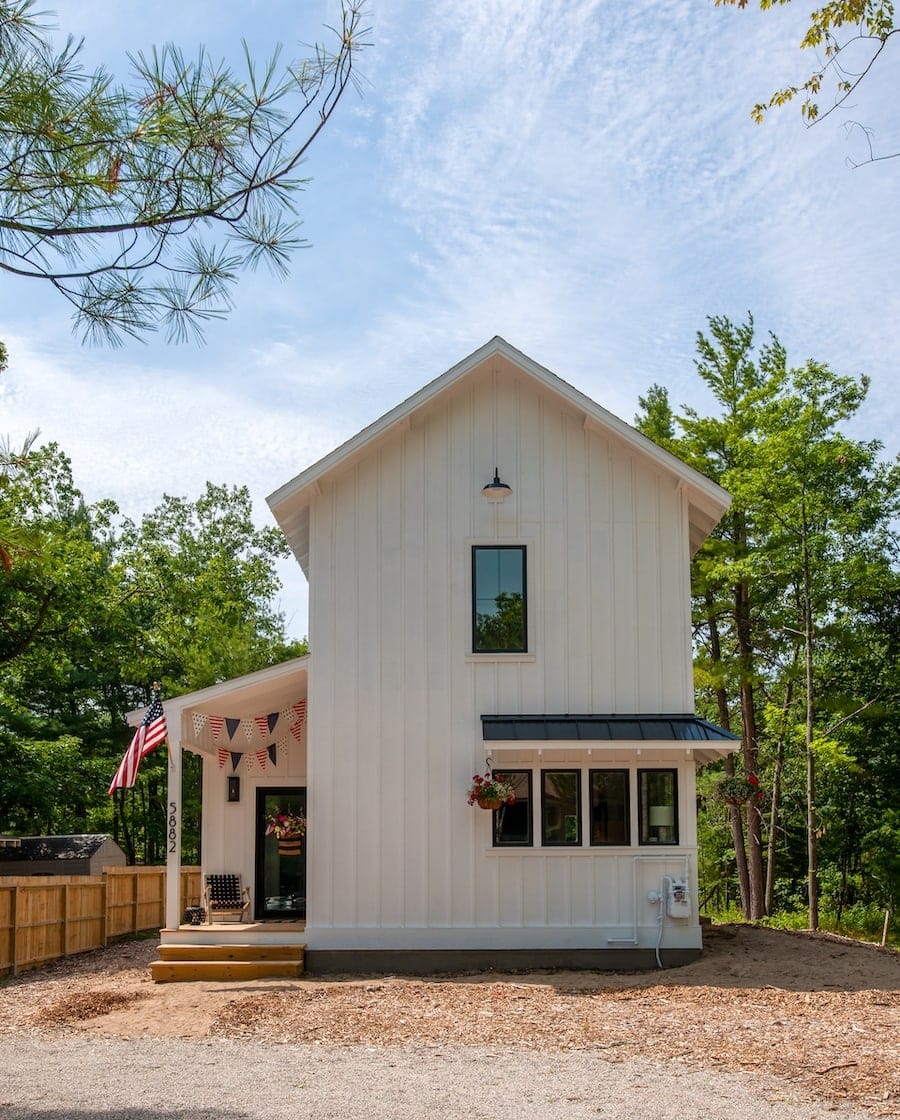 My new neighbors, Ginny and Mike Thomas, nailed it. The diminutive white board-and-batten modern farmhouse looks completely at home in Glen Arbor—a point that was important to the couple from the get-go. “We really wanted to build something that fit in,” Mike says.

Having spent many summers on Glen Lake with Ginny’s sister and her family, the Thomases had grown fond of the petite, two-intersection town with its two quiet roads that lead to small public beaches on Lake Michigan’s Sleeping Bear Bay. So fond that when Ginny and Mike decided to purchase their own place Up North, their daughters and the rest of the family agreed that downtown Glen Arbor was where they wanted it to be. So Mike gave their Realtor, Pam Depuy of The Martin Company, a simple direction: “Find us a lot close enough for grandchildren to go get ice cream by themselves.”

When Pam delivered with this narrow lot within walking distance of four places to buy ice cream, the Thomases purchased it and began the search for a small, efficient design that would cozy into it. They found the blueprint online—first attracted by its small footprint and many windows—then worked with their builder, Wayne Tyge, to customize it to their needs. “Wayne is a hands-on builder,” Ginny says. “He’s incredibly accessible, creative and a problem solver. He told us things we hadn’t thought of and he was always open to suggestions.” 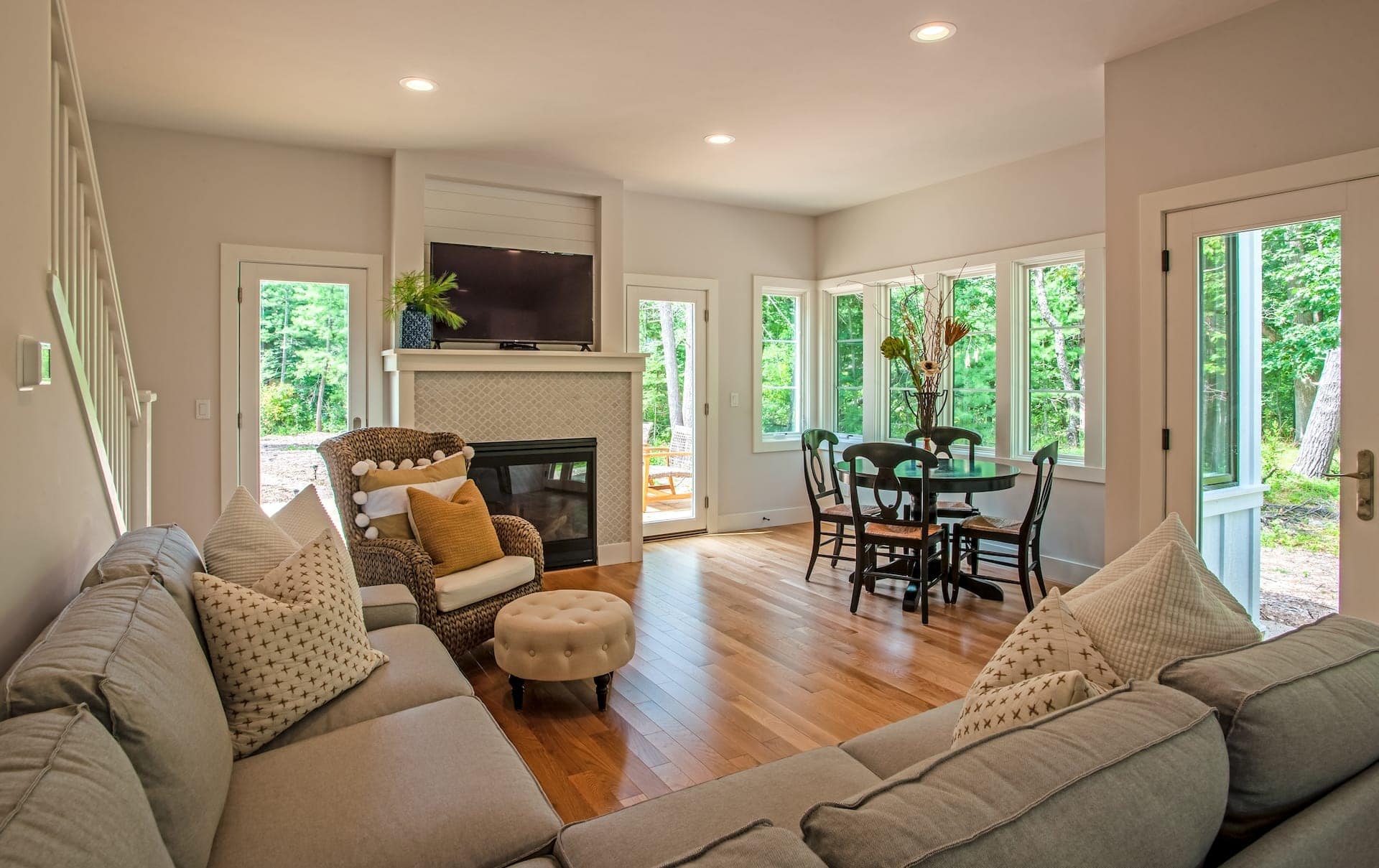 One of the biggest conundrums Wayne solved was how to fit two full baths into a plan that initially called for one-and-a-half baths—the half bath being off the kitchen. The only place for the full bath on the ground floor was under the steps, a space that was to house the HVAC system. Wayne somehow (magic?) found another place for the HVAC and the Thomases got their full bath.

Another space saver was Mike’s insistence that they remove a walk-in pantry from the plan: “An Up North home doesn’t need more than a week’s worth of food,” he says. True, especially with Anderson’s Market across the street.

Get your Traverse Area Home Tour tickets on MyNorthTickets.com.