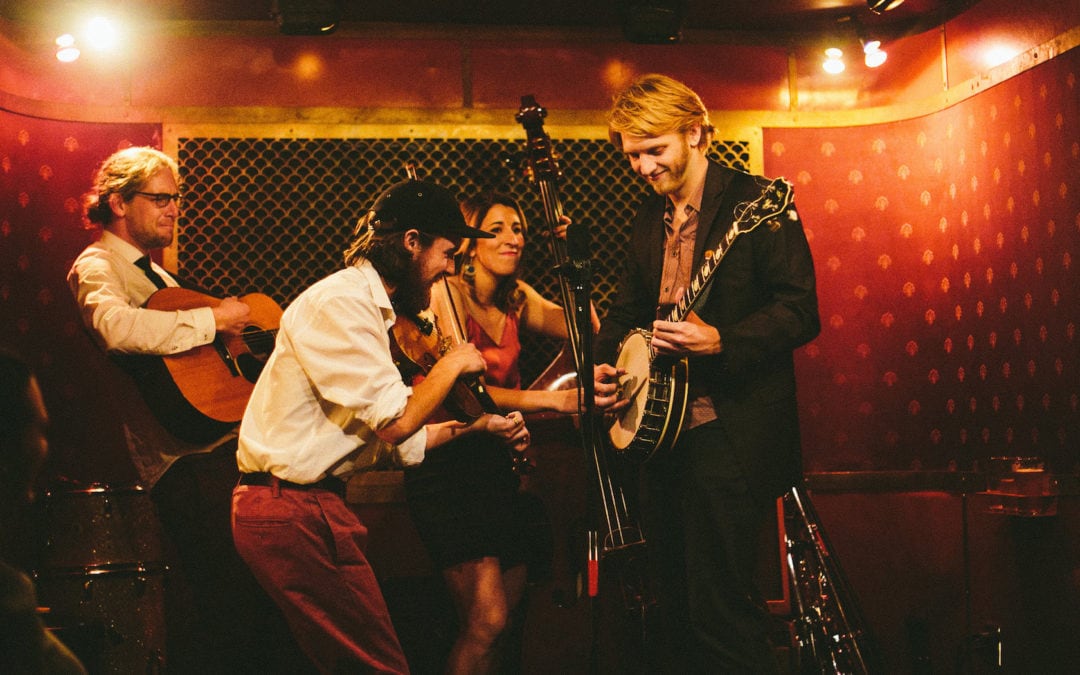 The 2019–2020 Dennos Concert Series in Traverse City includes 10 performances, varying from Irish ballads and dancing to a hilarious revue to a traditional Tibetan show endorsed by the Dalai Lama.

In their early days, Damn Tall Buildings didn’t rehearse, they busked. Now, whether live or on record, the band still radiates the energy of a ragtag crew of music students playing bluegrass on the street. But anchoring that energy is their instrumental chops, their strong songwriting and their varied influences that stretch beyond bluegrass, even beyond American roots music altogether. Whether sharing lead vocals and instrumental solos or blending their voices into high-spirited harmony, Damn Tall Buildings are a tight unit.

With Pick Your Poison’s urgent, uncompromising music, Selwyn Birchwood is forging new directions for the blues. The Washington Post calls him a “tough, indelibly modern next generation bluesman.” The Wall Street Journal says he is “fiery and original.” The hard-hitting, cutting-edge songs on Pick Your Poison, along with his incendiary live performances, prove without a doubt Selwyn’s status as the blues’ most sensational young talent.

Che Apalache is a four-man string band based in Buenos Aires with members from Argentina, Mexico and the United States. The group’s founder is Joe Troop (fiddle), a North Carolinian multi-instrumentalist, singer-songwriter and composer who moved to Argentina in 2010. While patiently carving out a niche in the local music scene, Joe taught bluegrass and old-time music for a living. That’s how he met Pau Barjau (banjo), Franco Martino (guitar) and Martin Bobrik (mandolin), his most dedicated students. They quickly became picking buddies and in 2013 decided to hit the stage.

Celebrating its 15th year, the hugely popular holiday show Irish Christmas in America brings a fascinating performance of music, song, dance and stories. This family-friendly performance features lively instrumental tunes on fiddle, flute, uilleann pipes and harp, along with thrilling Irish old-style dancing from Samantha Harvey. In addition, evocative photographic images provide a backdrop to some of the rich historical traditions of Ireland.

This time, The Second City is Laughing For all the Wrong Reasons. The Second City is here to break all the comedy rules they made famous in this all-new, all-hilarious revue that will leave you laughing…and questioning your very existence on this lonely planet. Okay, maybe not questioning your existence, but you’re guaranteed to re-think everything you thought you knew about what’s funny! Starring the next generation of comedy superstars, there are about a bazillion right reasons to not miss this show.

The Second City’s Improv for Beginners class focuses on teaching the building blocks of improvisation to adults with little to no experience as they have a great time learning with touring company members. Must be 18 or older. Workshop fee includes a ticket to the show at 8 p.m.

Khalif Wailin’ Walter without a doubt belongs to the new generation of Chicago’s young blues players who are carrying on the deep tradition. This definitely ain’t your daddy’s blues though. Khalif’s music, while firmly rooted in the Chicago electric blues guitar tradition, is infused with modern funk and innovative arrangements to create his own unique musical voice. Khalif’s stinging and singing guitar work is reminiscent of blues’ greats Otis Rush, Albert King and Albert Collins. This is a beautiful journey through funk, soul and rock all wrapped in the Chicago Blues.

Nive Nielsen plays with her band called the Deer Children. She won an IMA independent music award in the US, worked with Howe Gelb and John Parish and friends from such indie royalty outfits as The Black Keys and Wolf Parade. What’s even more surprising is that her fanciful back story is matched by her own ability to tell stories or sometimes just hint at them with her warm, reedy voice. Sometimes she sings out with an old-timey quaver; sometimes she sings in a soft, murmur. The songs themselves are straight out of a storybook that never was. They could be from anywhere, and they are hard to place in time.

Robed in magnificent costumes and playing traditional Tibetan instruments, the Loseling monks perform ancient temple music and dance. The tour is produced by Drepung Loseling Monastery in Atlanta and is endorsed by His Holiness the Dalai Lama. During their residency, the monks will also create and demolish a mandala sand painting in the museum’s Sculpture Court. Their tours aim to make a contribution to world peace and healing through sacred art, to generate a greater awareness of the endangered Tibetan civilization and to raise support for the Tibetan refugee community in India.

Loudon Wainwright III’s long and illustrious career is highlighted by more than two dozen album releases, movie and TV credits, and now his new autobiography, Liner Notes (2017 Penguin/Random House). In 2010 he won a Grammy for Best Traditional Folk Album for High Wide & Handsome. His 2012 recording, Older Than My Old Man Now was named one of NPR’s Top 10 Albums of the Year. His songs have been recorded by Bonnie Raitt, Johnny Cash, Earl Scruggs, Kate & Anna McGarrigle, Rufus Wainwright and Mose Allison, among others.