A Bear of a Golf Course: The Tuff Enuff Golf Tournament Returns 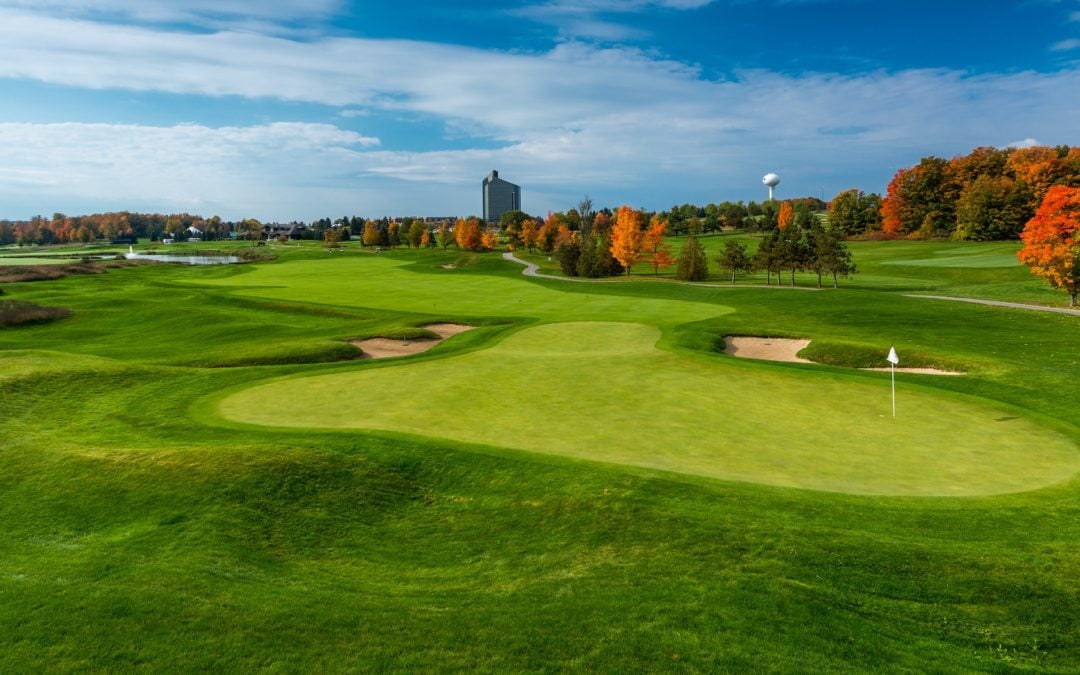 Play one of Michigan’s toughest golf courses, The Bear, at its absolute hardest at the 11th Annual Tuff Enuff Golf Tournament.

When the original developer for Grand Traverse Resort and Spa—Paul Nine—approached Jack Nicklaus in the early ’80s to build a golf course, he asked for one thing: the hardest course in the state of Michigan.

Nicklaus did not disappoint. The Bear plays over 7,000 yards, and its difficulty has led to it being the home of prestigious tournaments like the Michigan Open Championship and the PGA’s own Ameritech Senior Open. Fast forward almost 35 years, and The Bear still ranks among the most challenging 18 holes in the nation.

And because it’s important to stay true to your roots, each October, the Golf & Grounds team at the resort turns The Bear into a true beast for the Tuff Enuff Golf Tournament.

On Sunday, October 20, the brave are welcomed to Grand Traverse Resort and Spa as teams hit the links to prove they are indeed tough enough to take on The Bear. The 11th annual tournament features long-range tee boxes and aggressive greens for a two-person, best-ball event open to male, female and mixed teams.

“We place the tee markers as far back as we can and choose the most difficult pin placements that are (mostly) fair,” says Paul Galligan, Director of Golf & Grounds. “Sometimes you’ll four putt, sometimes you’ll sink a forty footer. It’s all about being tough enough.”

Galligan adds that Mother Nature also helps make the course a bit more complicated. “The rough is naturally thick this time of year, and leaf drop can make finding your golf ball more difficult than usual.”

Local golfer Jamie Bush has taken the challenge in years past. “I play in the tournament to challenge myself on the toughest course in Northern Michigan. I like playing the course long, and it’s fun to play The Bear as hard as they set it up.”

Over the years, the tournament has seen rain and shine, with winter parkas and short sleeve polos on hand as the day progresses. To the competitors, the weather is another challenge to overcome.

“The most difficult part of the tournament is dealing with the weather,” Bush says. “I’ve played this event in snow, sun, wind, rain and sleet. It’s a brutal challenge if the weather is nasty. Pulling off a birdie or eagle under tough conditions can be a nice little skin as well.”

The tournament brings out players’ competitive sides, so having an optional skins game the day of the event ups the ante. And though there’s a purse to be won, the true prize is the bragging rights.

“The prize is nice, but anytime you play, it’s about saying you’re the champs,” says Dave Seida, who is a two-time defending champion along with his teammate Dave Denyer. “It’s a tough set-up and takes both guys playing well on the same day to be able to win.”

Seida and Denyer will be playing in the tournament again this year to defend their title and get one final round in on The Bear. The Tuff Enuff tournament is the last day The Bear will be open for the season, sending the course into hibernation in style.

After the final golfer turns in their card, Paul Galligan and his team get right back to work. “The next Monday, we start getting The Bear ready for winter,” he says.

Ready to take the challenge? Get your tickets at MyNorthTickets.com.