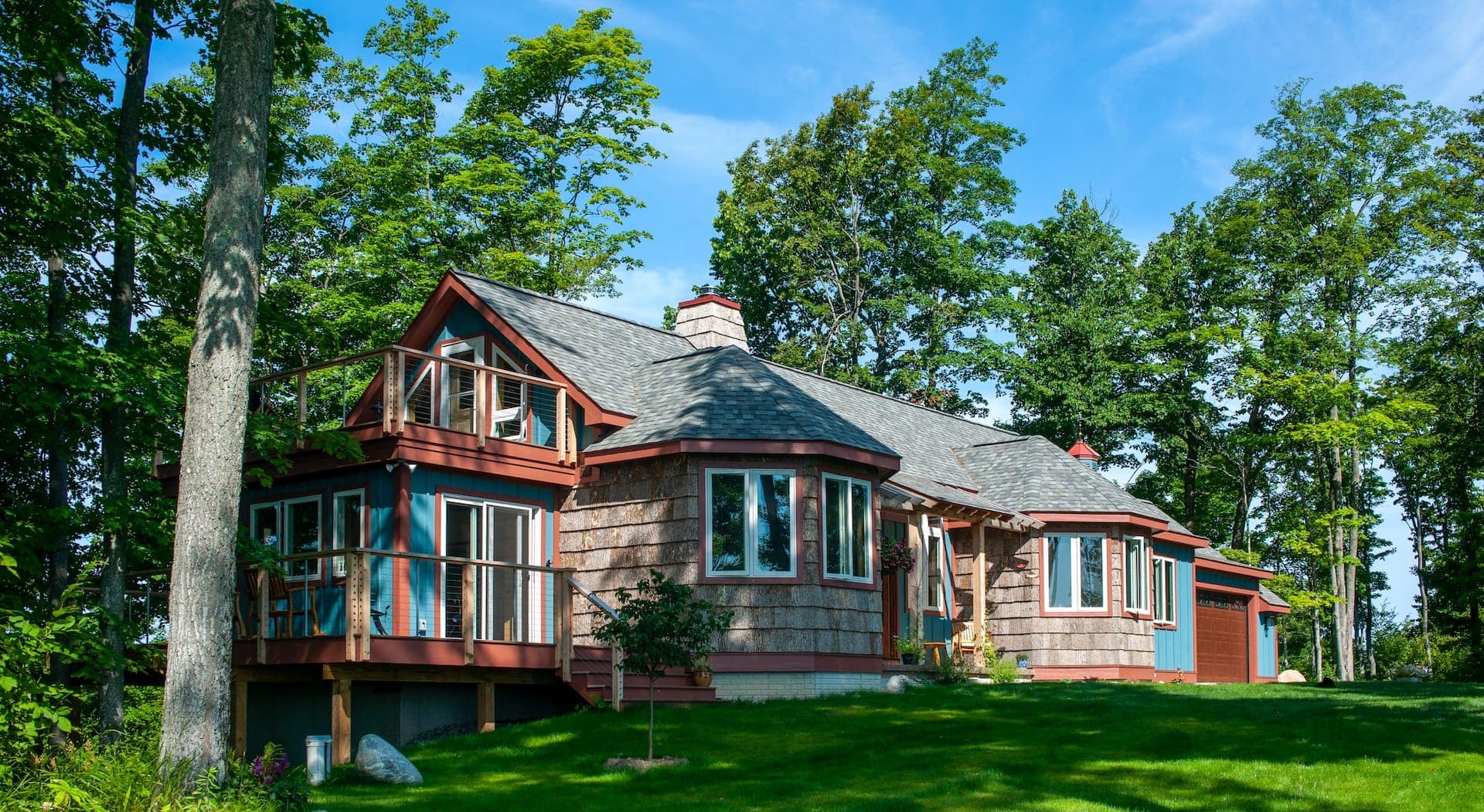 Evy Elsing loves octagons. She can’t explain why. This creative and accomplished woman, a renowned cellist, simply finds them interesting. She also loves nature—watching it out her windows and bringing touches of it inside her home. Scott Norris was the perfect contractor to build her retirement home in Northport.

Scott has made a name for himself as a skilled builder with an ear for listening to his clients and an eye for determining the best designs for their site. As he did for Evy, Scott will even evaluate a property for a client before the property is purchased. He is also known for the energy efficiency of his homes and for his ability to stay within a homeowner’s budget. For Evy, however, the deciding factor in choosing Scott is his care in working with a property’s topography. “I chose Scott because he said he liked to build things that look right in their site,” she says.

Scott had already shared his hesitations about building on several properties Evy had found when she showed him this slice of heaven atop a hill on the Leelanau Peninsula’s northern tip. For this property, he gave two thumbs up.

This home was featured on the 2019 Traverse Area Home Tour by Northern Home & Cottage. 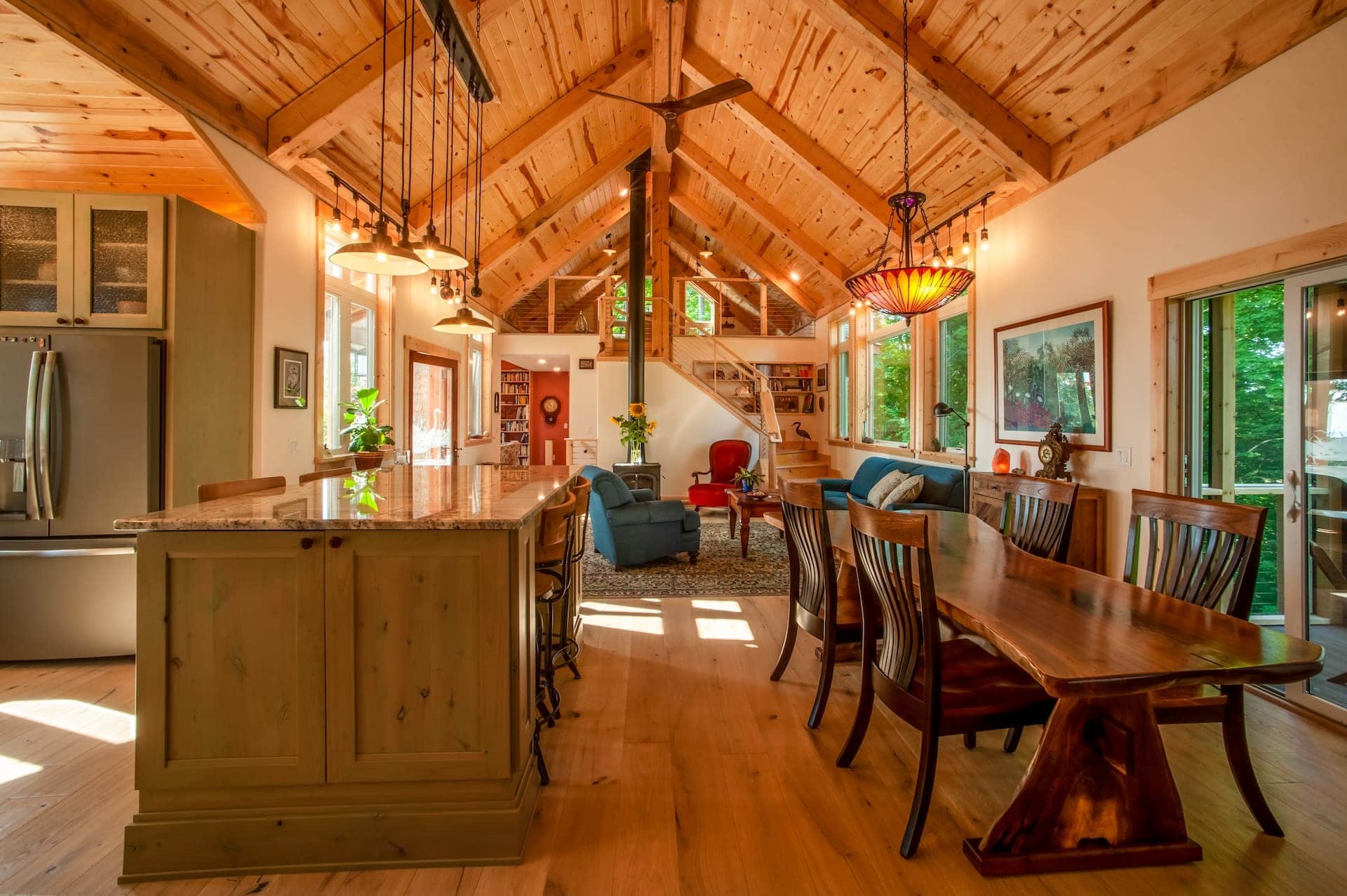 Working closely with Evy, Scott’s son, designer Caleb Norris, developed a plan that captured the stunning West Grand Traverse Bay view on one side and forests and landscapes on the other. He also incorporated octagonal spaces—five of them to be exact, including the kitchen, master bath, a library, music room and a loft for taking in the view.

The exterior is clad in board-and-batten painted a water-inspired blue and complemented by natural bark siding. A cupola complete with a weathervane rounds out this design that harmonizes with its water, woods and agricultural site. 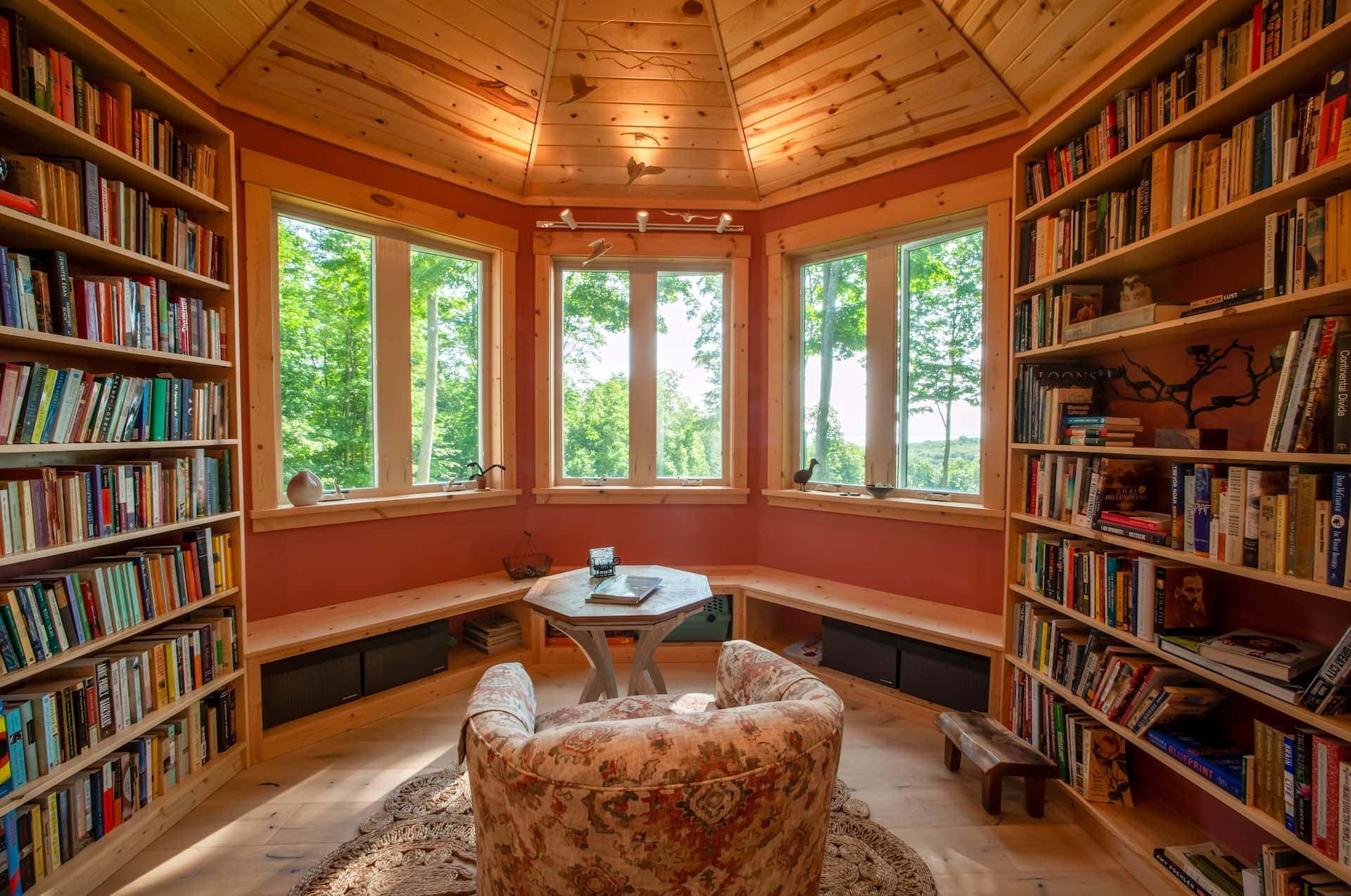 The light-filled interior is warmed by honey-toned wood, all from Northern Michigan—an oil finished white oak floor and Eastern white pine-clad vaulted ceiling and beams. From the great blue heron etched into the front door (fabricated by TC Mirror and Showerdoor) to the island-top granite with its pattern that reads like a grove of birch trees, this home is full of not-to-miss details.

Tourgoers also won’t want to miss the inductive range (Evy loves it!); the handmade tiles embossed with animal prints that Scott’s sister, Janet Bower, made especially for the home; and the handmade walnut table that Scott made.

The home also features another Scott Norris standard touch: a root (or wine) cellar off the lower level made from utilizing space created from the deck above it. 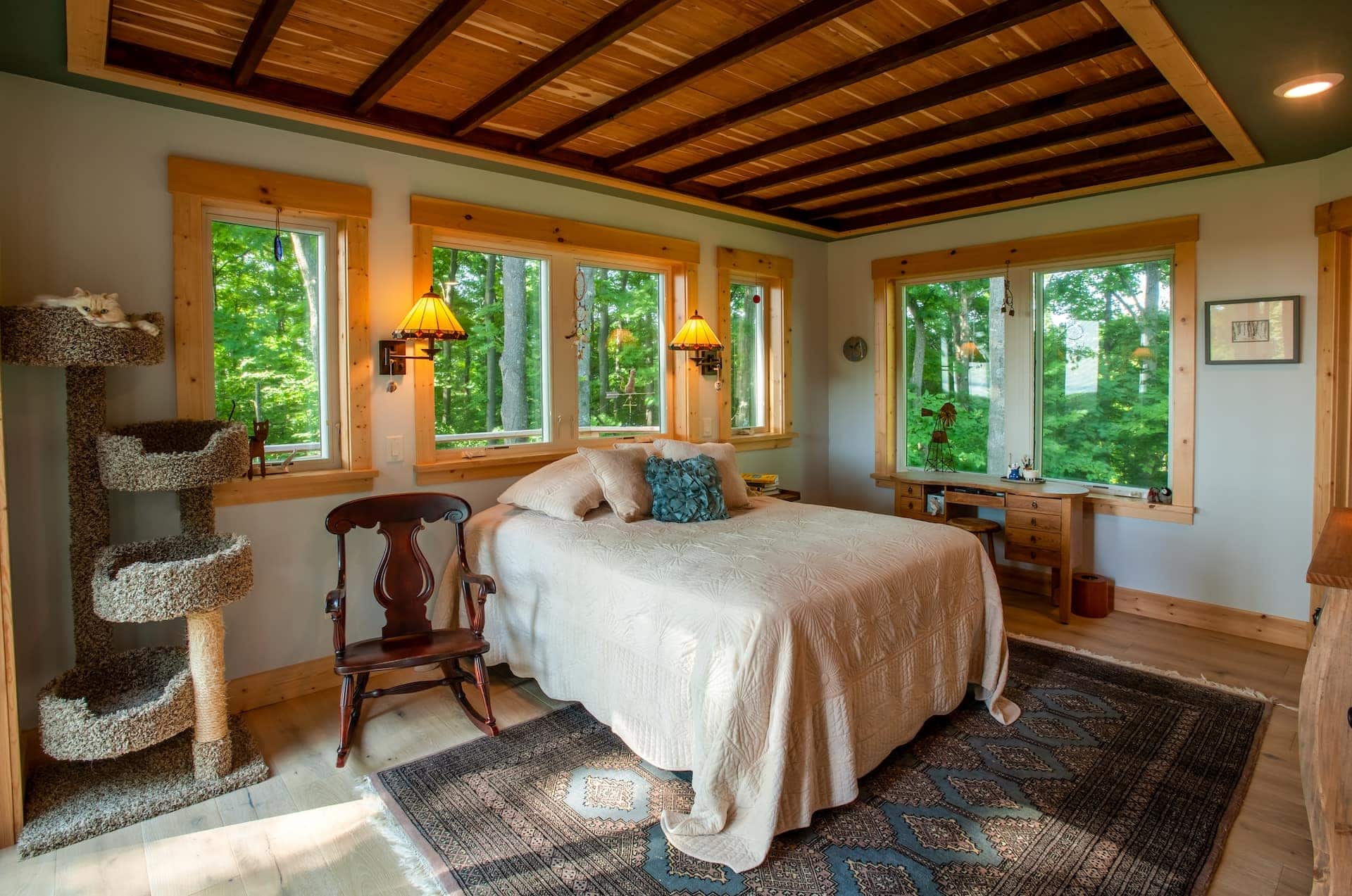 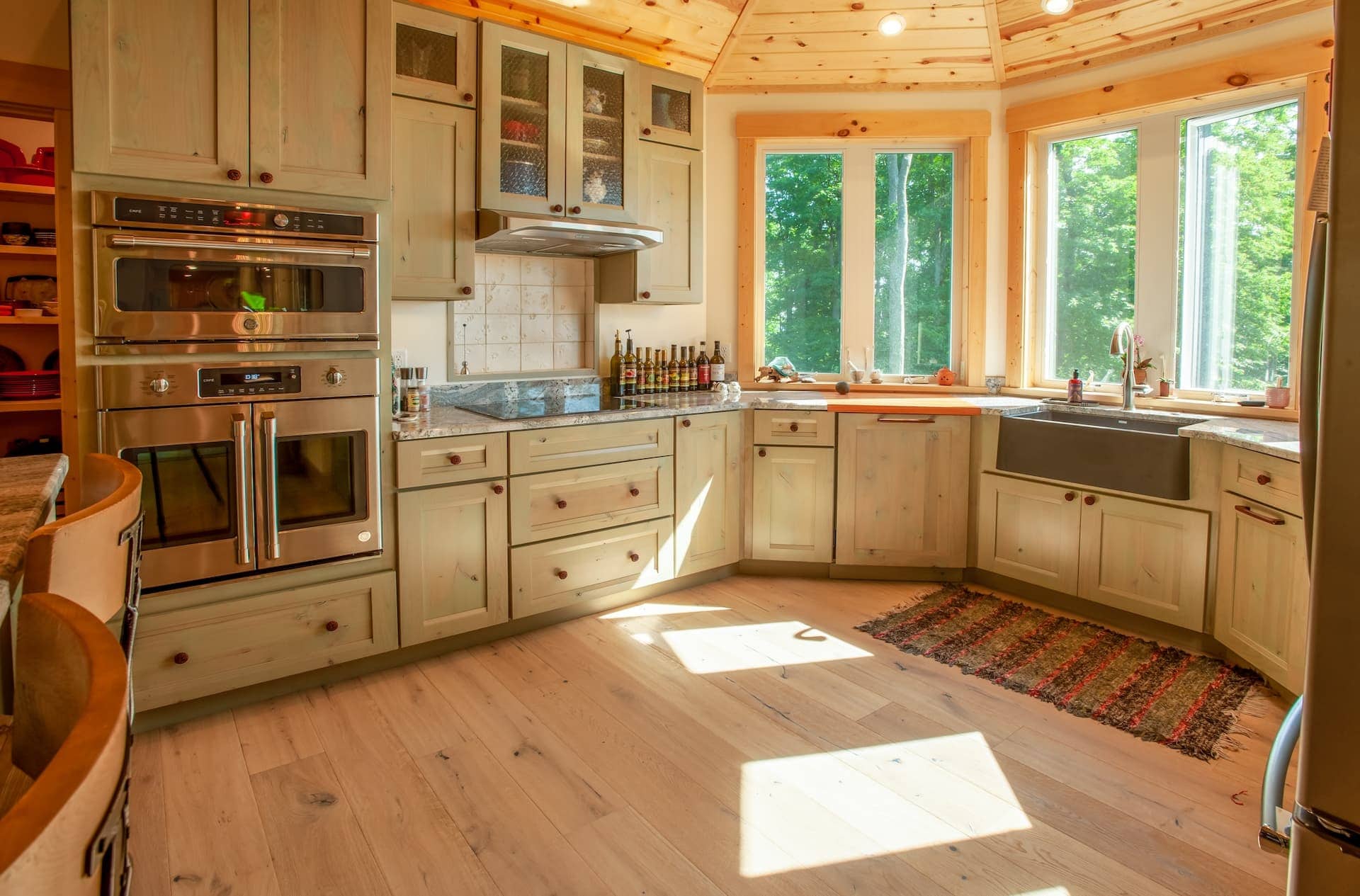 The landscape is a dose of Zen in itself. Outside, a small waterfall trickles down to a pond that ends in that expansive water view across the horizon. Trees and grape trellises paint a lush picture from the screened-in porch on the back of the home.

Evy says of her experience building the home: “It was so joyful.” Just like the home itself. 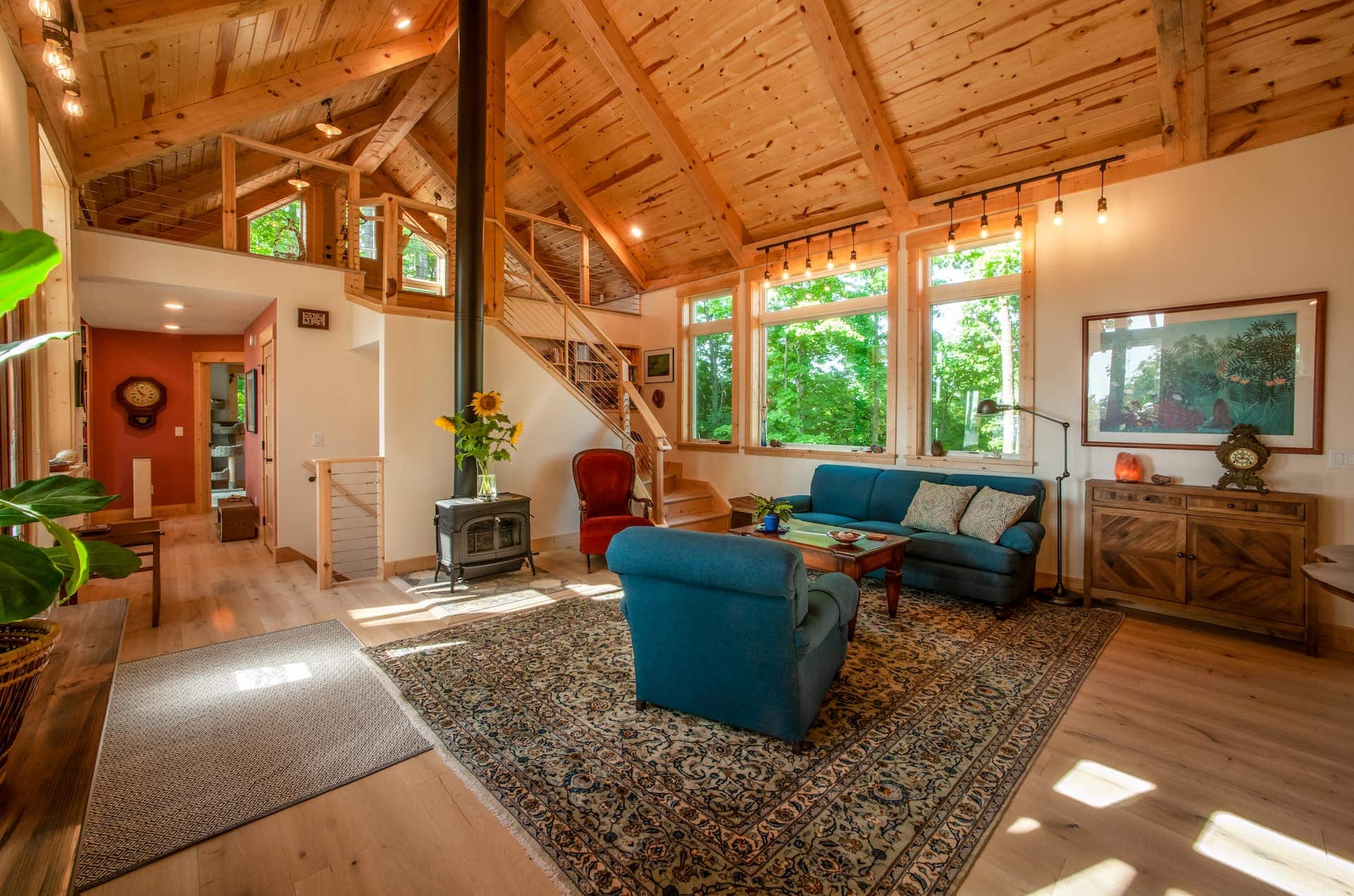