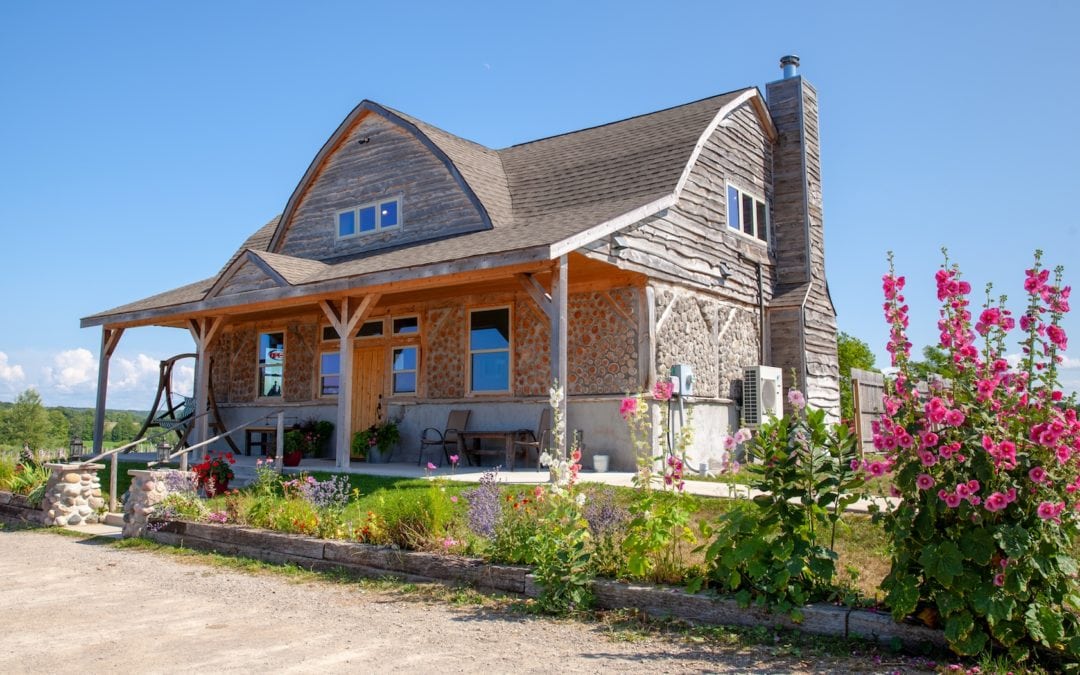 The Petoskey Wine Region, centered around the resort town of Petoskey, is home to more than a dozen wineries, many of them breaking new ground in the world of wine. The grape varieties most people are familiar with—think chardonnay, riesling, merlot and pinot noir—are rare here. Look for new wine grapes with names like Marquette, Frontenac and Crescent, to name a few, at these Petoskey wineries.

The brutal winters make wine grape-growing a challenge, but many vintners have learned to grow cold-hardy grapes, many of them hybrids and many of them only developed in the past decade or so by some of the country’s leading agricultural research universities.

The resulting wines are distinctive and worth showing off. Winemakers describe the wines as a little brighter, with a little higher acid content to them. They can work the same magic—using oak barrels and other tricks—as other vintners do with famous European varieties. 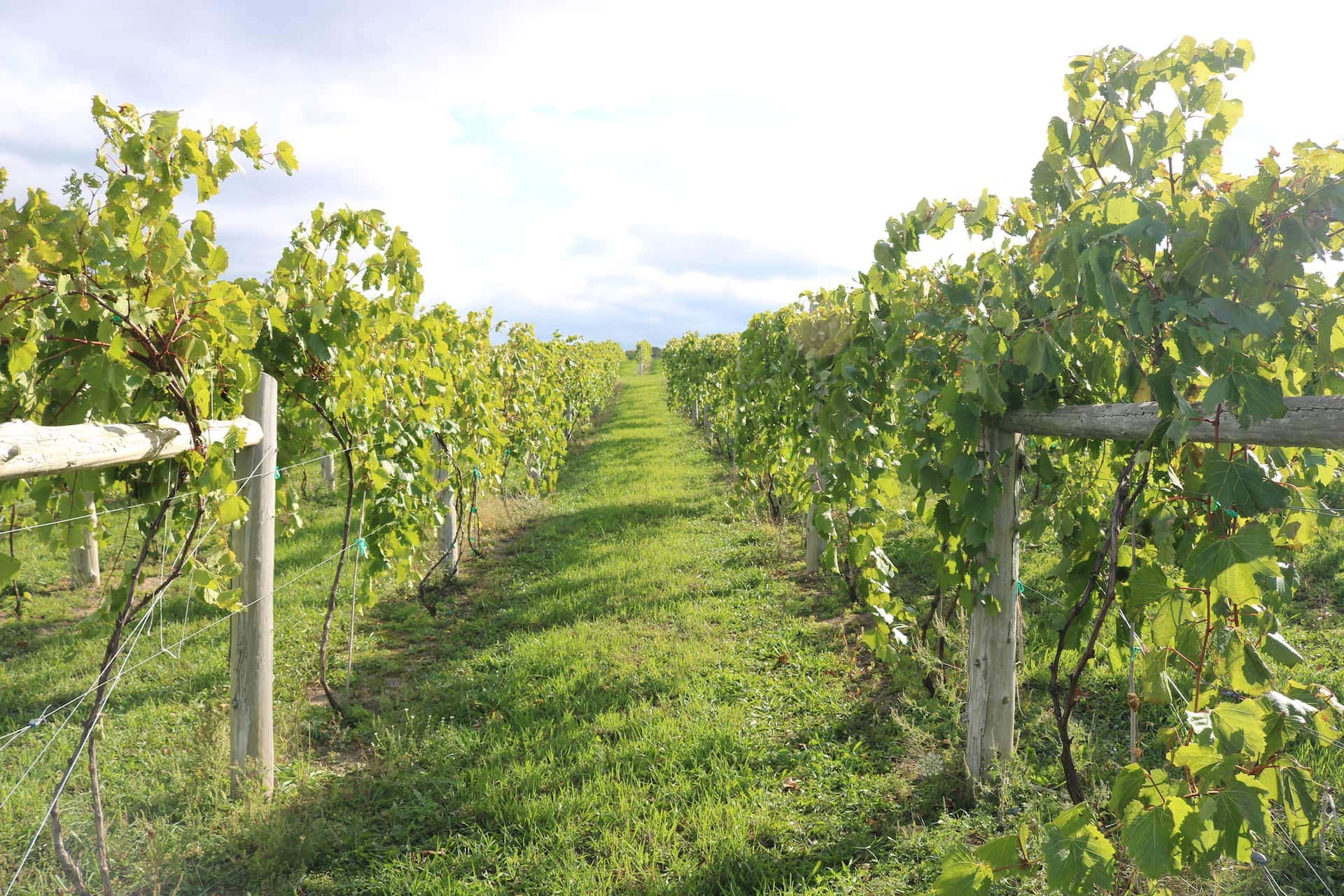 The Petoskey Wine Region is as distinctive as other wine trails in Michigan. So much so that the area, from just south of Charlevoix to the Straits of Mackinac and east to Alpena, was designated its own American Viticultural Area three years ago. Known as the Tip of the Mitt, the region has a distinctive climate and soil, different than the state’s better-known appellations in southwest Michigan and the Traverse City area.

“Winter is our biggest hurdle,” concedes Dustin Stabile, head of production at Mackinaw Trail Winery, the region’s oldest winery. “Our winters are much more harsh and our growing conditions are tough because we don’t get the number of growing days like they do along Lake Michigan or in Paw Paw. One way to adapt is to be very selective about the grapes we are planting.”

Mackinaw Trail planted roots in the region more than a decade ago, the first winery to recognize the region’s potential. Although the winery traces its roots to the Upper Peninsula, its operations eventually moved south and settled along US 131, south of Petoskey. The winery also has tasting rooms in Mackinaw City and Manistique and recently established another winery and brand, Resort Pike Cidery and Winery, southwest of Petoskey.

“We are starting to turn some heads,” Stabile says. “We are pioneering a whole new wine region. It’s really exciting. One of the great things about the wineries here is that we all work together. We don’t work against each other as competitors. We’re in this together.” 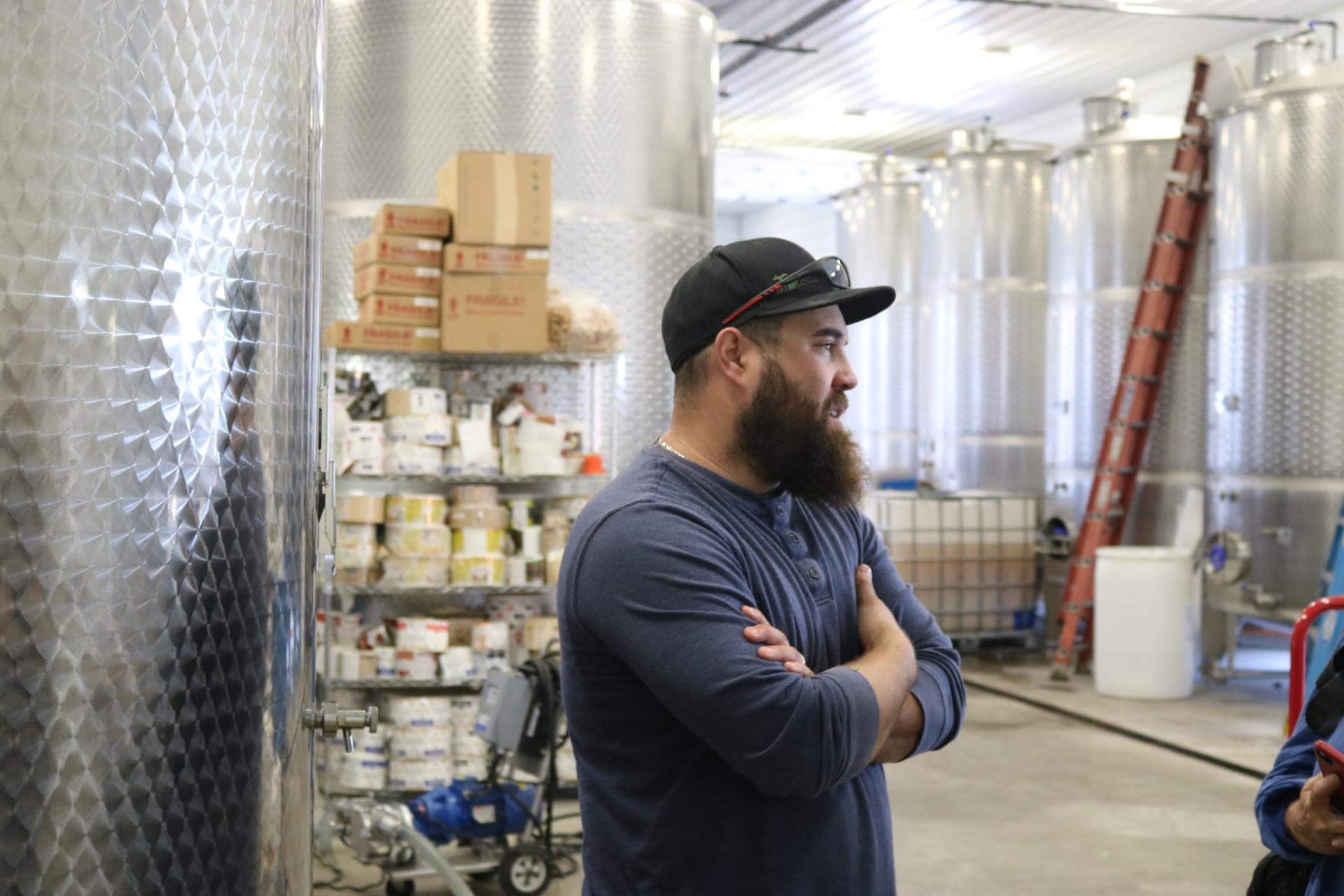 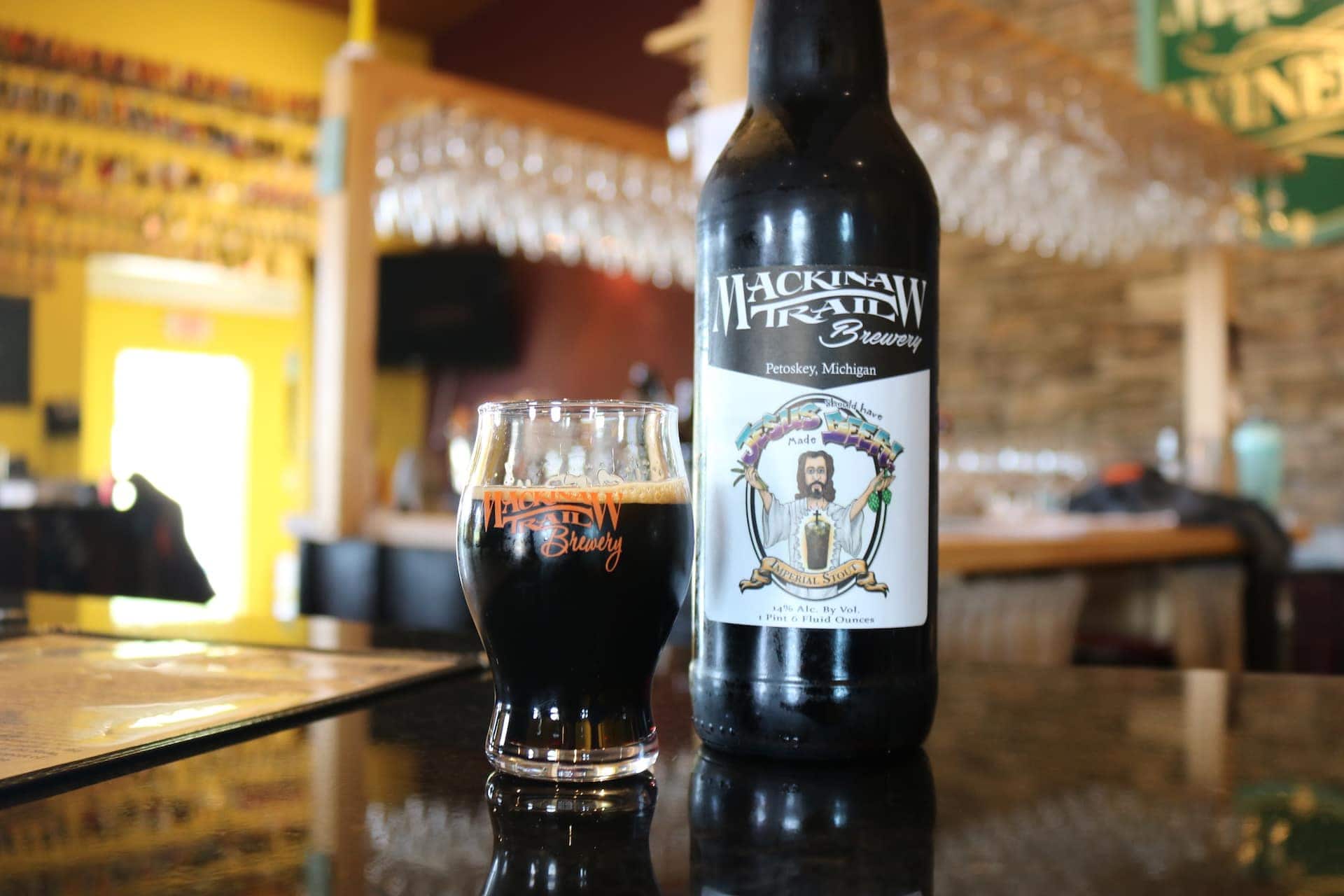 Also helping uncork the region’s potential is a name change from the original trail name, as well as more aggressive marketing. The former name, Bay View Wine Trail, referring to Little Traverse Bay, didn’t quite resonate with a lot of people; almost any coastal area of Michigan could boast a bay view.

With the name change, the Petoskey Wine Region is gaining traction, not only from the throngs of tourists who visit Petoskey, Harbor Springs and Charlevoix, but also curious and adventurous wine enthusiasts. As of fall 2019, 13 wineries are officially a part of the trail.

Taste your way through the Petoskey Wine Region.

Mackinaw Trail is the oldest winery in the Petoskey Wine Region, and Stabile says he’s already seen his business improve dramatically since the opening of its primary tasting room and winemaking operations on US 131 in 2013. The winery has about 31 acres of wine grapes planted, with plans of growing more.

Tilling the land to plant vines has unearthed some surprises for many wineries: an abundance of Petoskey stones.

It’s a common occurrence and most winemakers let visitors take them. 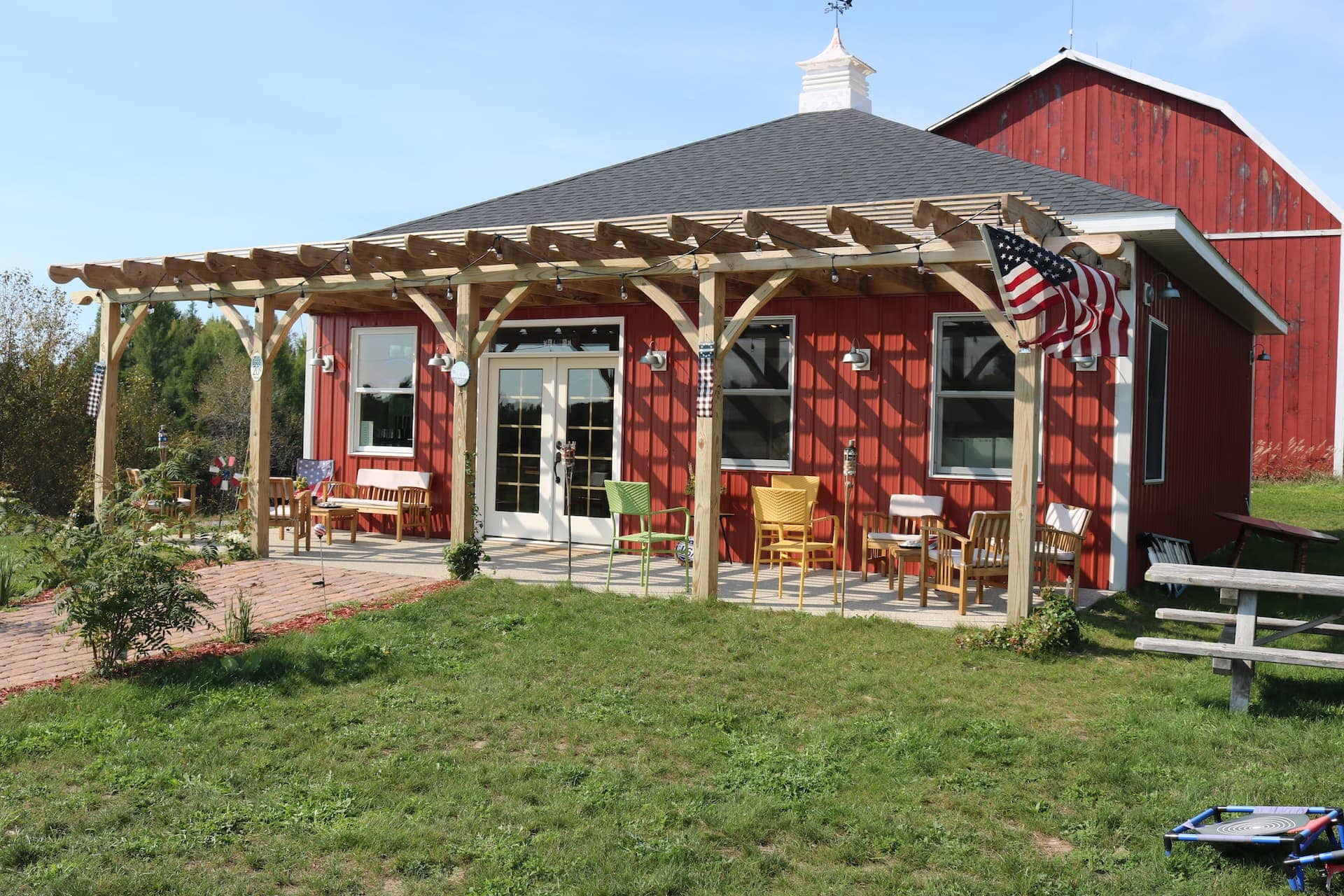 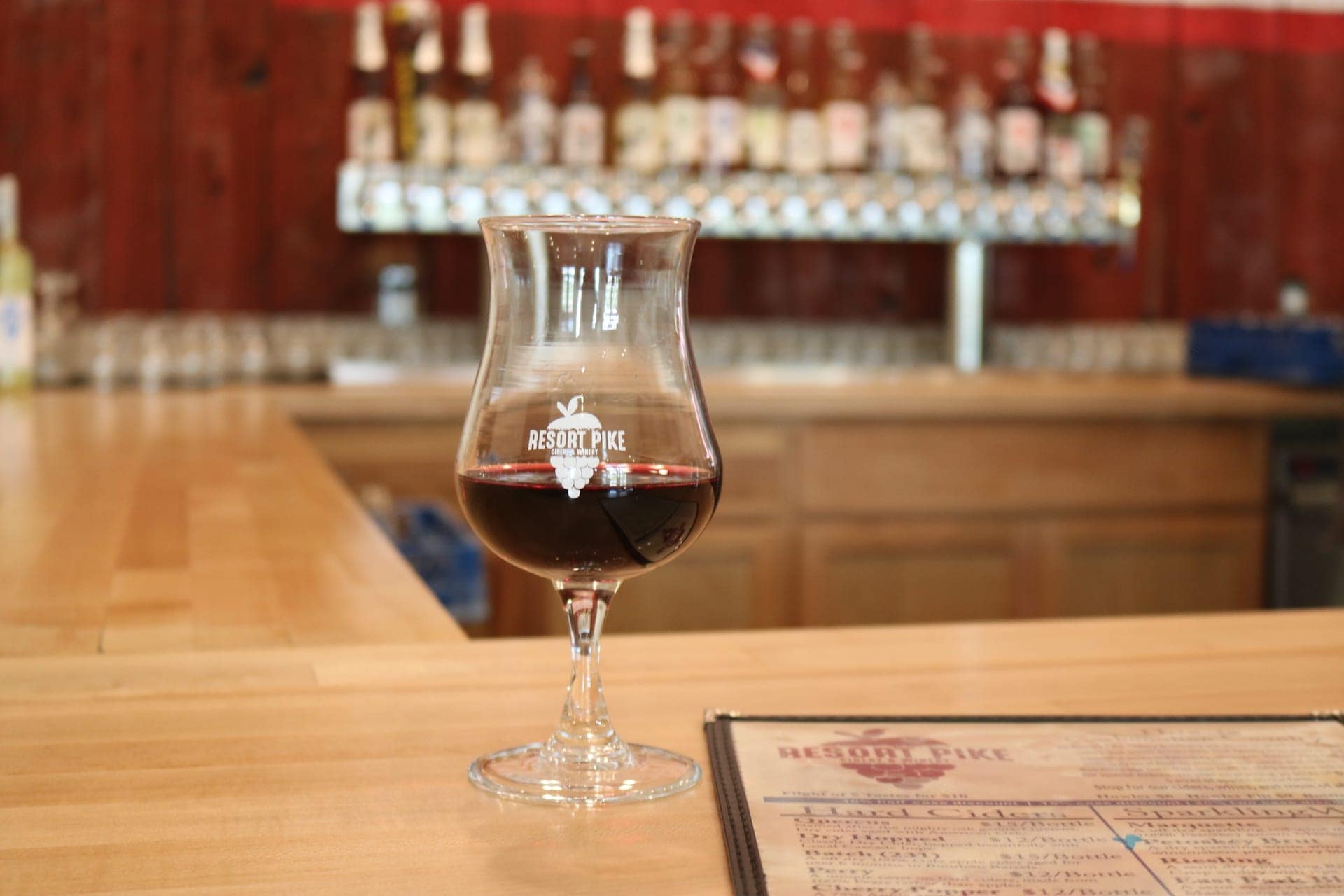 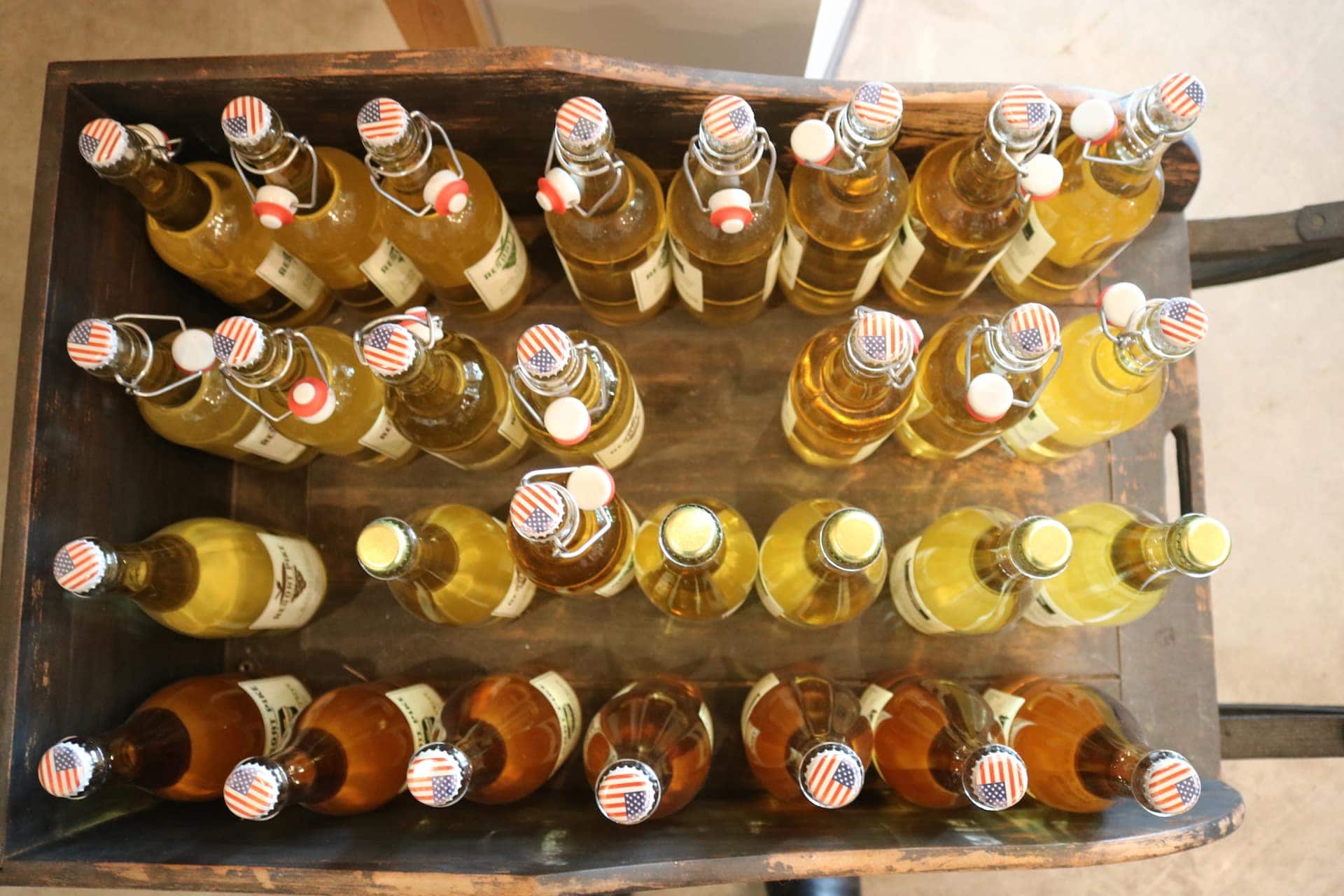 For the most part, the wineries in the Petoskey Wine Region are smaller in scale, mom-and-pop operations, many of them with ties to farm families.

Growing wine grapes—thanks to the introduction of those cold-hardy hybrids—is a natural extension of cultivating apples, cherries, and other fruits. Among the family farm operations and wineries are: Cellars of Royal Farms on US 31 in Ellsworth, Petoskey Farms Vineyard & Winery and Pond Hill Farm Vineyards and Winery in Harbor Springs, and Rudbeckia Farm and Winery, also near Petoskey.

The region is also home to a very unusual winery, Maple Moon Sugarbush and Winery, the country’s first and Michigan’s only maple winery. Owners Todd and Christi Petersen tap a 28-acre grove of sugar maples, fermenting wine grapes with sugars in the maple syrup. They produce 11 wines, six of which are truly maple-fermented wines. The wine grapes come from other parts of Michigan, and the winery uses about 200 gallons of maple syrup to produce its wines.

“People love the wine,” Christi Petersen says. “Some stop by because they’re intrigued and dying to try the wine. Some don’t realize what they’re getting into but love it. There’s always the, ‘Wow, I didn’t know you could do that.’ The wines are exceptionally smooth; maple is not acidic like grapes.” 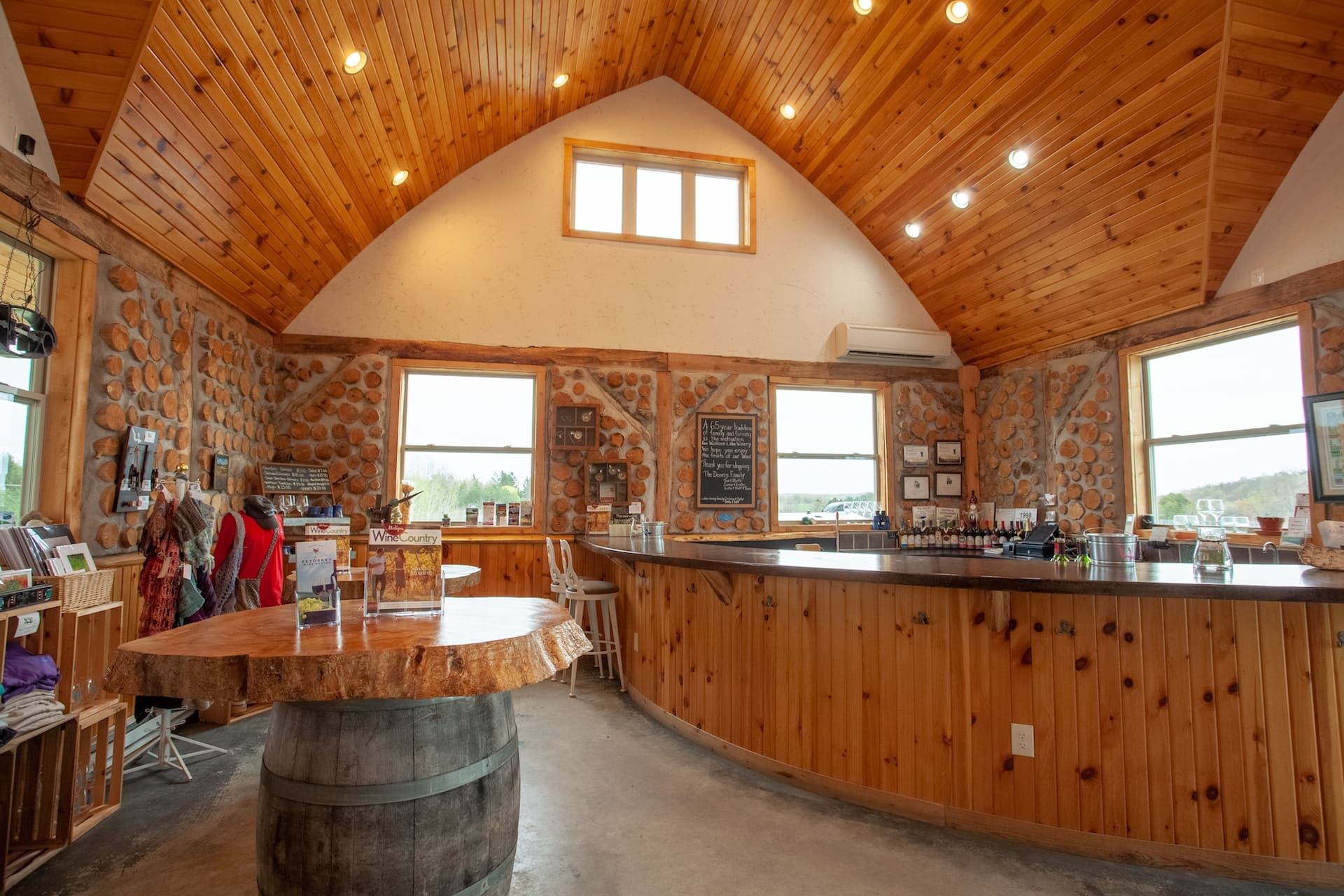 One of the first wineries to gain some statewide attention was Walloon Lake Winery, a family-owned winery not far from its namesake lake. Two years ago, the winery’s North Arm Noir won Best of Class in the dry red category in the annual Michigan Wine Competition. The red wine was made from that then-little-known hybrid grape, Marquette. A red hybrid grape had never won Best of Class in the competition before.

Among the newer wineries to sprout in the Petoskey Wine Region is Crooked Vine Vineyard & Winery, operated by Geoff and Gail Frey. The couple opened the 38-acre winery nearly six years ago, after building the log cabin tasting room themselves. Crooked Vine is growing Marquette, Frontenac gris and La Crescent, to name a few.

“We knew we couldn’t grow wine grapes. Concord and Delaware, grapes native to North America, have been grown here for years but they don’t go too far with wine drinkers,” say Frey, a former IT guy whose passion for wine led him to become a vintner.

“We do a lot of educating with the consumers who come in here,” he says. “They’ve never heard of some of these grapes. We explain how they’re different or similar to other grapes they may know, like cabernet sauvignon or chardonnay.

“People are totally amazed at what we’re doing with the limited climate and how beautiful the region is,” he adds. “We can’t grow corn or tomatoes like they do in southern Michigan because our growing season is so short and temperatures get cold. It’s the same for wine grapes. We can’t grow the grapes they’re growing in Traverse City or below.”

Despite the unfamiliarity with hybrids, consumers are embracing them after a little education and some time spent visiting wineries on the Petoskey trail. There’s also a growing trend among consumers to buy local products, and that includes locally grown and produced beverages.

“Being able to say we grow our own grapes is important,” Dustin Stabile says. “By being able to say our grapes are estate-grown, people are more open to trying different varietals. That’s been a big part of our success.”