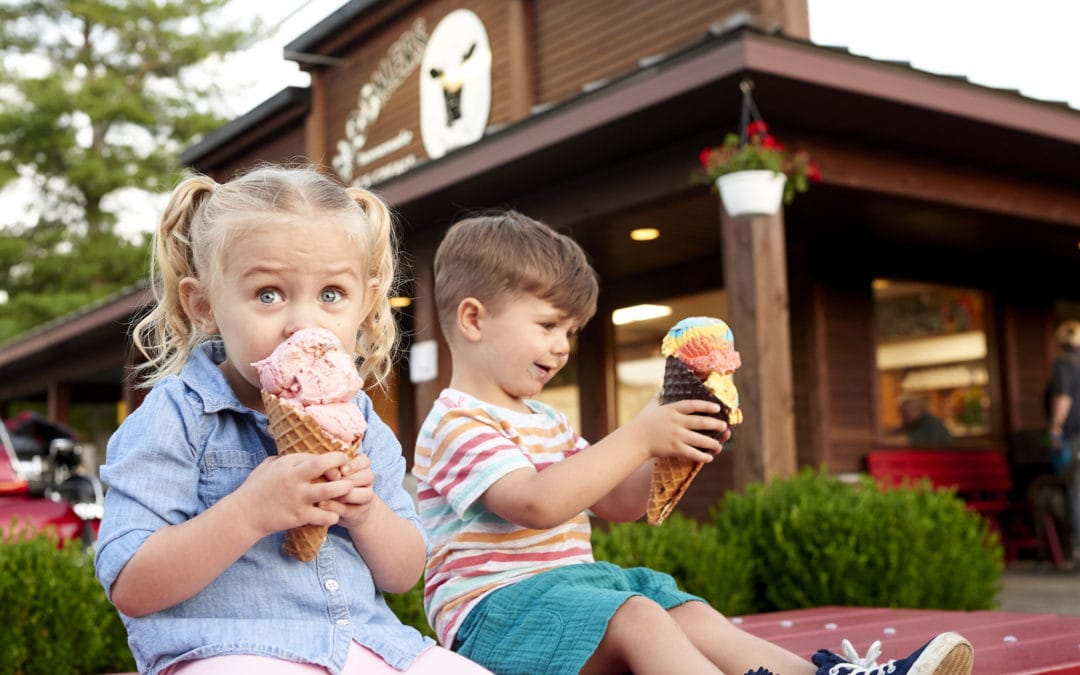 Life is sweet here on Long Lake Road in Traverse City. This is how Moomers Homemade Ice Cream went from family business to “holy cow!”…

It’s 9:08 on a hot summer morning, and already a line is queueing in the Moomers parking lot. The open sign hangs dark in the window, the doors are locked, yet people mill about, waiting.

Of course, the Moomers team has been here for ages. Patriarch Bob Plummer arrived at the adjacent barn around dawn to milk the 16 cows. He’ll be back again at 5 p.m. to milk them again. Inside the shop, a contingent of workers has been churning ice cream for hours. They’ve also been pinting it, separating out restaurant and special-occasion orders, and, of course, building cookies and cakes and sundry ice cream novelties.

What was intended to be a small operation when it launched 22 years ago hit its stride rather quickly. Today, Moomers has a whopping 160 flavors—20 of which are available daily—and a massive fanbase. On a July day, they expect 2,000 people will visit the store.

Featured in the August 2019 issue of Traverse, Northern Michigan’s Magazine. Get your copy. 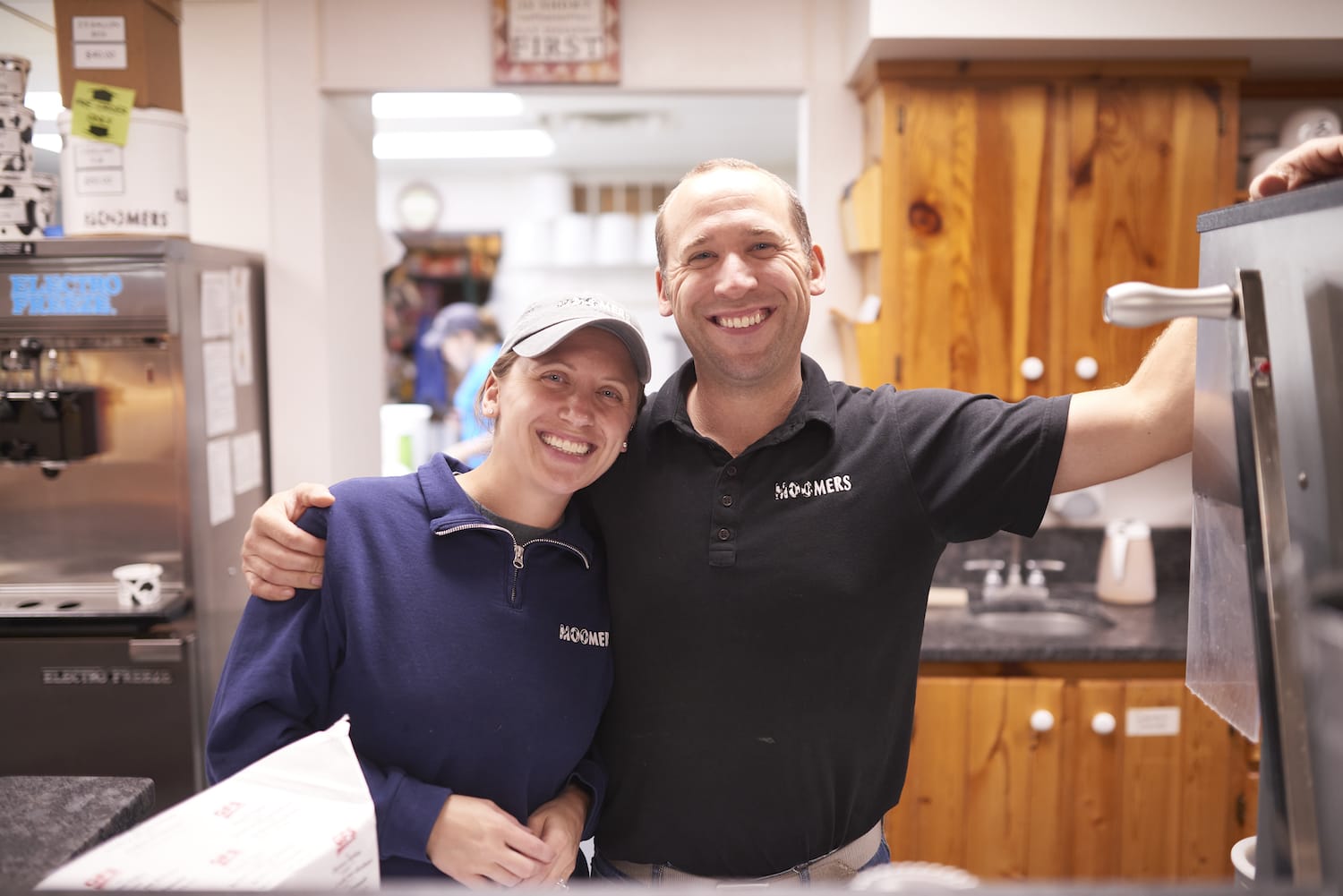 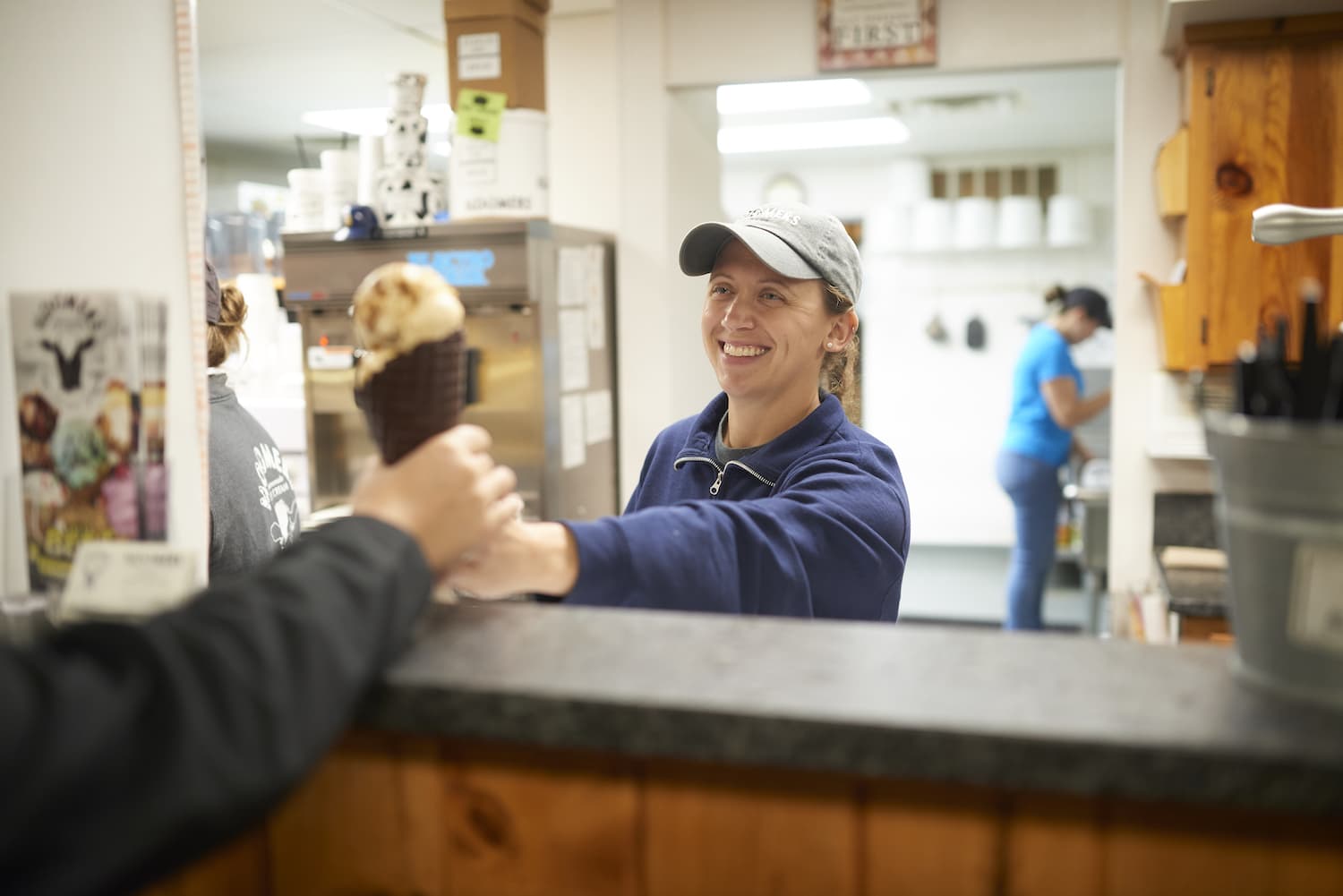 In the front of the house are the scoopers; in the back are the technicians responsible for making roughly 48 2.5-gallon tubs of ice cream a day. The scoopers have seen it all, and they know what goes into Cow Tracks versus Bear Paw. “Ice cream makers are former ice cream scoopers,” says Jon Plummer who, along with parents Bob and Nancy and sister Becky Mead, is co-owner of Moomers Homemade Ice Cream and Moomers Farm Creamery. “You need to know that half of the job to perform this half of the job.” (Becky and Jon pictured above.)

Once the ice cream is mixed and made, it’s flash-frozen. The faster ice cream is frozen, the less time water molecules have to get together and make ice crystals, which would disrupt Moomers’ creamy texture. 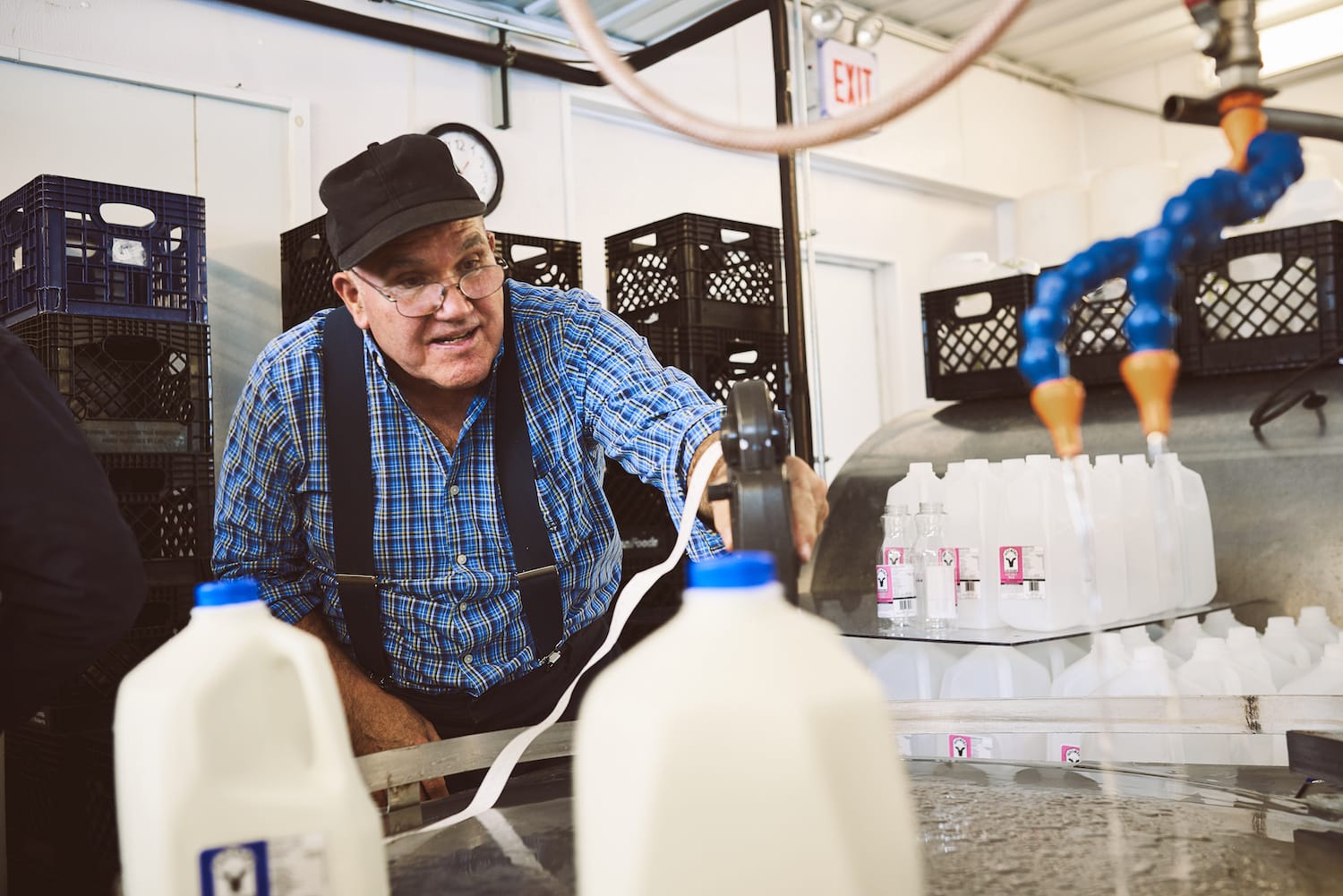 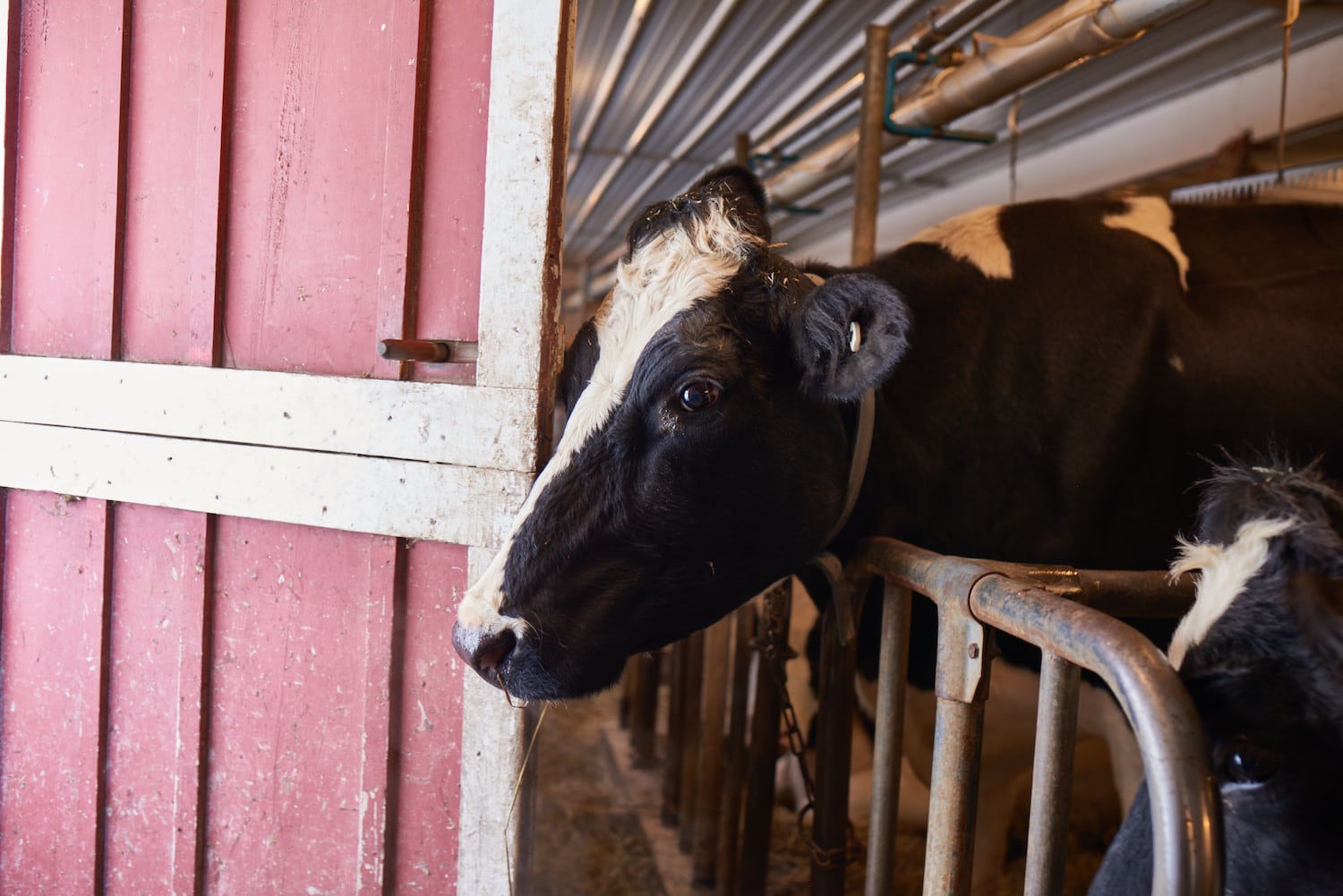 How did Moomers get started?

Despite being dairy farmers, ice cream was not the Plummers’ lifelong plan. Nancy Plummer built her career in education, spending 26 years as a first-grade teacher. But, by the mid-nineties, she was done. She wanted something outside of education that would satisfy her, and maybe incorporate some creativity too. An ice cream shop sounded like a good idea.

Moomers launched in 1998 to service “this side of town,” says Jon, meaning the west side, just past where Traverse City’s suburban neighborhoods begin to skew toward farmland. The family wanted a small, quaint, mostly seasonal ice cream company that would employ six to eight kids. Now, 22 years on, Moomers has 25 full-time employees, does catering, sells to restaurants, and is 50-50 retail and wholesale. Moomers made 4,200 gallons of ice cream in the first year in business. This year, they expect to clear 90,000 gallons.

Moomers true tipping point came 10 years in, in 2008, when the company was featured on Good Morning America after customers had nominated it for the morning show’s Good Scoop Challenge. Moomers made the top 10 cut, then into the top four. Then, on the Friday of Memorial Day Weekend, a GMA producer phoned to inform the Plummers that Moomers had won and, oh, by the way, a crew would be there to film the announcement at 5:30 a.m. the next day—hours before the shop was set to open; before even Bob Plummer would be in the barn with the cows. The Plummers sprang into action and invited anyone willing to brave the hour for a free 6 a.m. ice cream. They got hundreds of takers.

That award may have been what made Moomers famous, but it didn’t change the way they do business. While their fan base certainly exploded, the Moomers ice cream parlor remains the same 2,000-square-foot retail space Bob Plummer built himself in 1998. Wife Nancy and kids Jon and Becky handle the ice cream. The senior Plummer has since largely returned to his farming business and the cows. 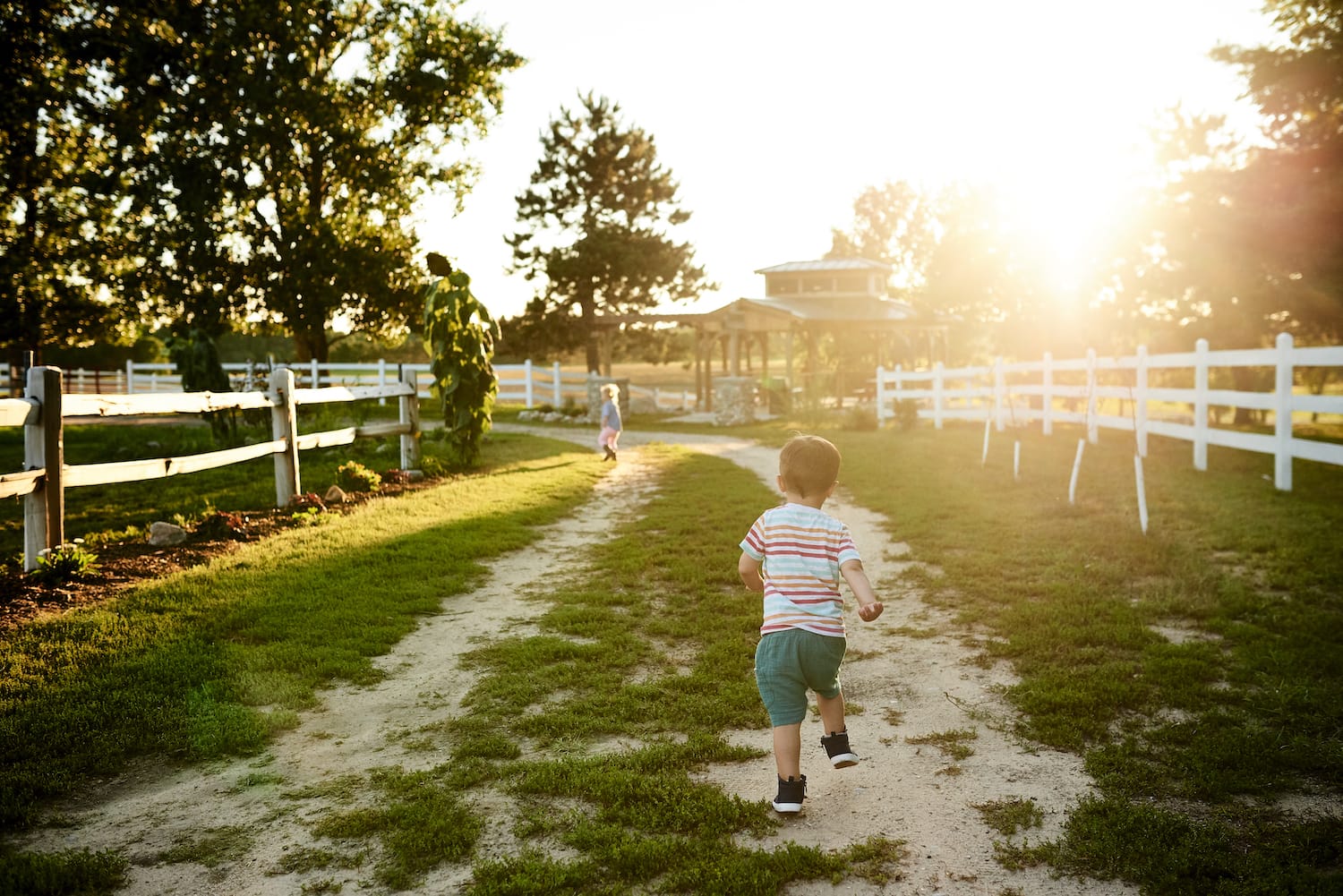 Have you visited the cows at Moomers?

About those cows: Interestingly, the dairy and the ice cream business are kept distinct from one another. Precious little of the cream and milk from the dairy next door is actually used in Moomers ice cream business, which is how it has been since the start. When Moomers was launched in ’98, the Plummers were milking around 18 to 20 cows. At the time, that would have been enough milk to service the business—though certainly not today. What they didn’t have, however, was a plant for pasteurizing, processing, and finishing the dairy. So, they went searching for a perfect mix, and had tasting and testing parties to cull the competition. In the end, they settled on a premium mix from London’s Dairy out of Port Huron. London’s has since been sold and resold, and today is owned by Country Fresh. Meanwhile, Moomers has become one of the largest purchasers of the mix—milk, cream, sugar, and stabilizer—in the state.

Nine years ago, the Plummers did open the creamery next door, but given the massive quantities of mix they use, they still rely on that outside source. Instead, the majority of the milk and cream produced next door goes to Boss Mouse Cheese in Kingsley. Come winter, when they do have surplus cream and milk, they make ice cream mix in house and freeze it for later use. 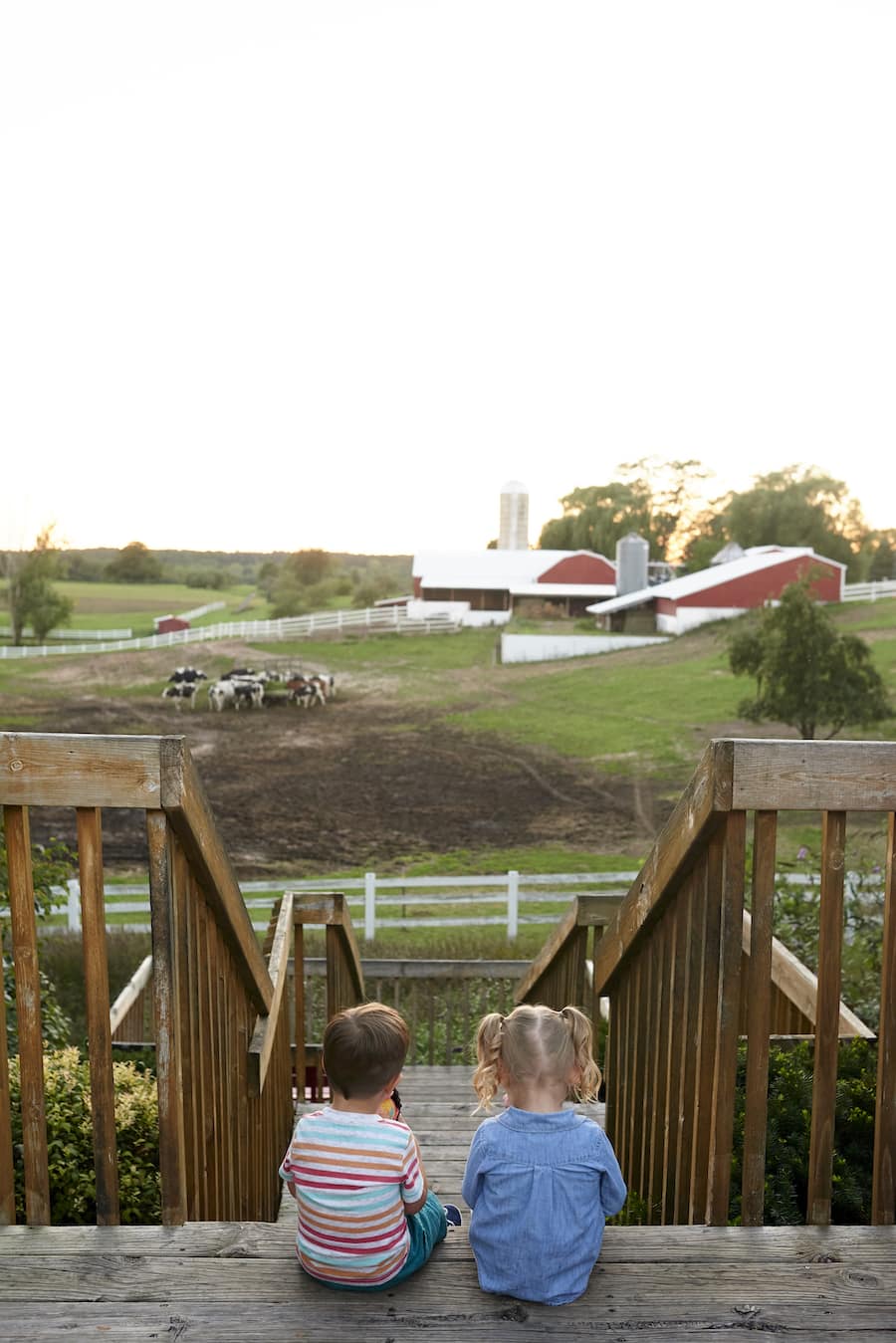 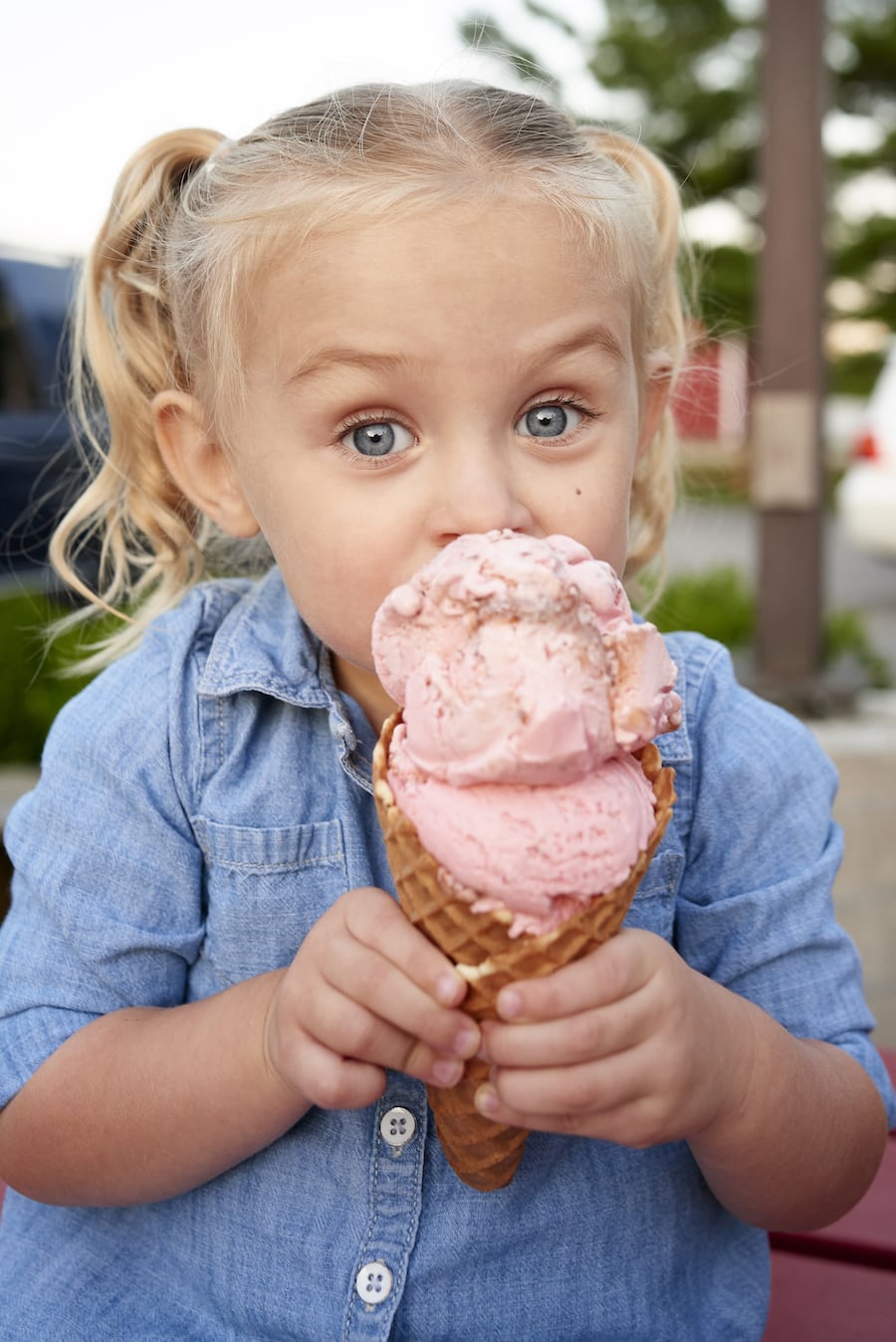 What are the best Moomers flavors?

The ice cream shop may not be on a direct pipeline from the dairy, but Moomers ice cream is remarkably fresh. Nothing—not the Butter Pecan or Cow Tracks; not Super Moo or Lemon Dream, and certainly not the Moomers exclusive trademarked Cherries Moobilee—sits around long. The Long Lake Road location simply doesn’t have the space to warehouse ice cream. Instead, every morning, Becky Plummer processes the orders from the wholesale accounts, counts the number of units per flavor, and schedules the day’s production schedule by flavor. Ice-cream making begins every morning around 7 and continues until enough of each flavor is batched to fill the orders at hand. No more, no less. Most batches are made only the day before they are delivered to a retail account—or to the Moomers counter. Shoot, Moomers even makes their own cardboard tubs for the ice cream.

Naturally, there are favorites. While it’s the Butter Pecan the Plummers think is exceptional, the top-selling flavors for 2018 were Caramel Sea Salt, Butter Pecan, Cookies and Cream, Chocolate Peanut Butter Chunk, Coffee Toffee, Mint Chocolate Chip, SuperMoo, and, of course, Cherries Moobilee, which always comes in at first place. 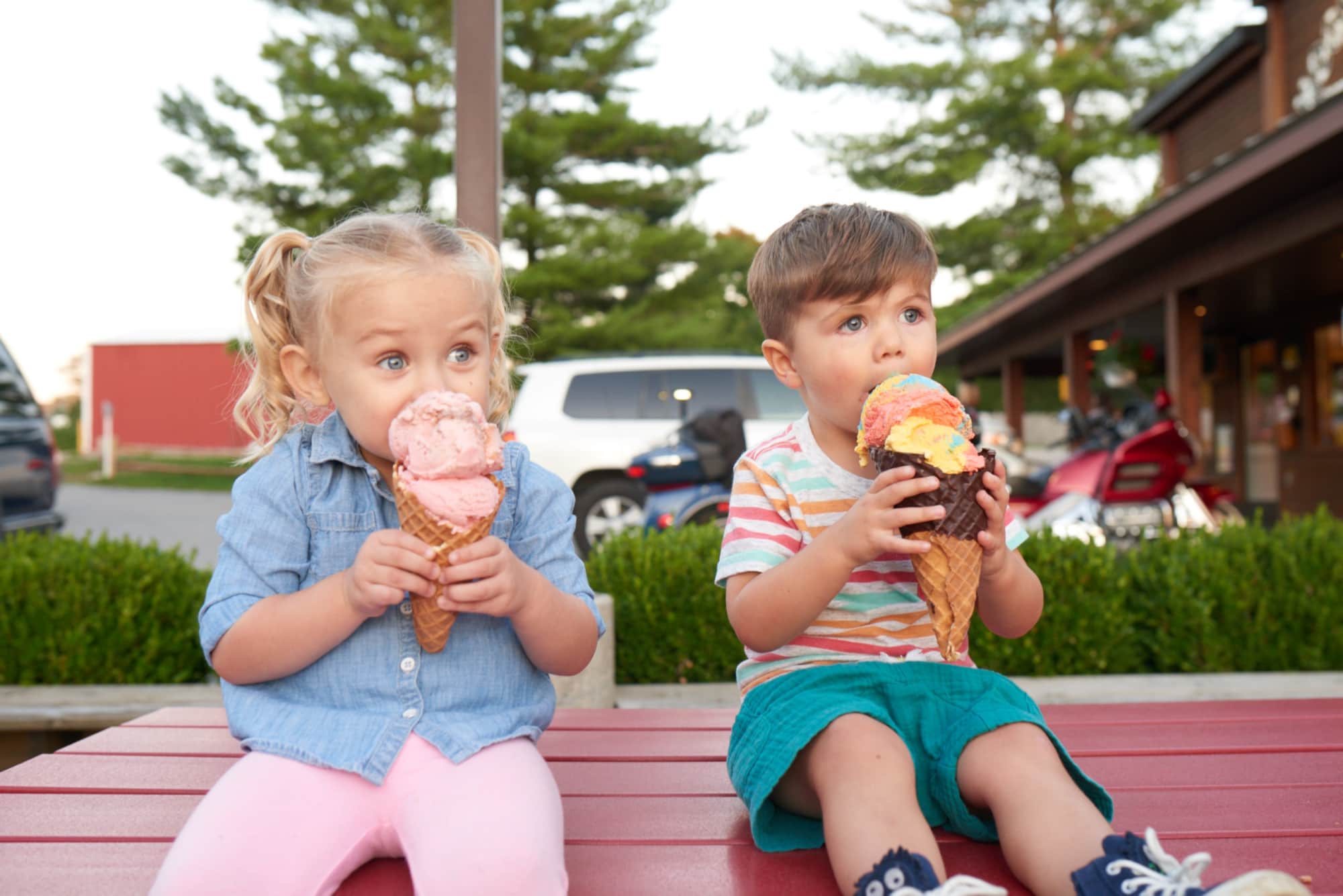 It was dad, Bob, who was responsible for that unintentional creation. When he still used to wander over and make ice cream, 15 or so years ago, he was batching some black cherry. Sitting on the counter next to him was a batch of brownies and a pitcher of chocolate swirl. Instead of putting the extra ingredients away, he dumped both into the black cherry mix, put a lid on it, and threw it in the freezer. Without a label.

To name the concoction, the Plummers held a contest, with the winner earning a free pint of the flavor of his choice and a half-gallon of the newly-named Cherries Moobilee. Early on, they sold about three batches of the flavor a year; after it appeared in the GMA award as Moomers’ signature flavor, popularity soared. Today, during high season, they make four to five batches a day.

But you’d better believe the Plummers never stop playing with their food. New flavors are dreamed up frequently. Some make it, some—like the Asparagus Swirl ice cream for the annual festival in Empire—are short lived. (Yes, it tastes about as good as it sounds, admits Jon.) But Jon and Nancy and Becky hit their happy place here on Long Lake Road, and judging from the line of people pouring through their open doors, up to the counter and outside to enjoy their scoops as morning light seeps over the farm, they seem to have struck their own brand of gold. 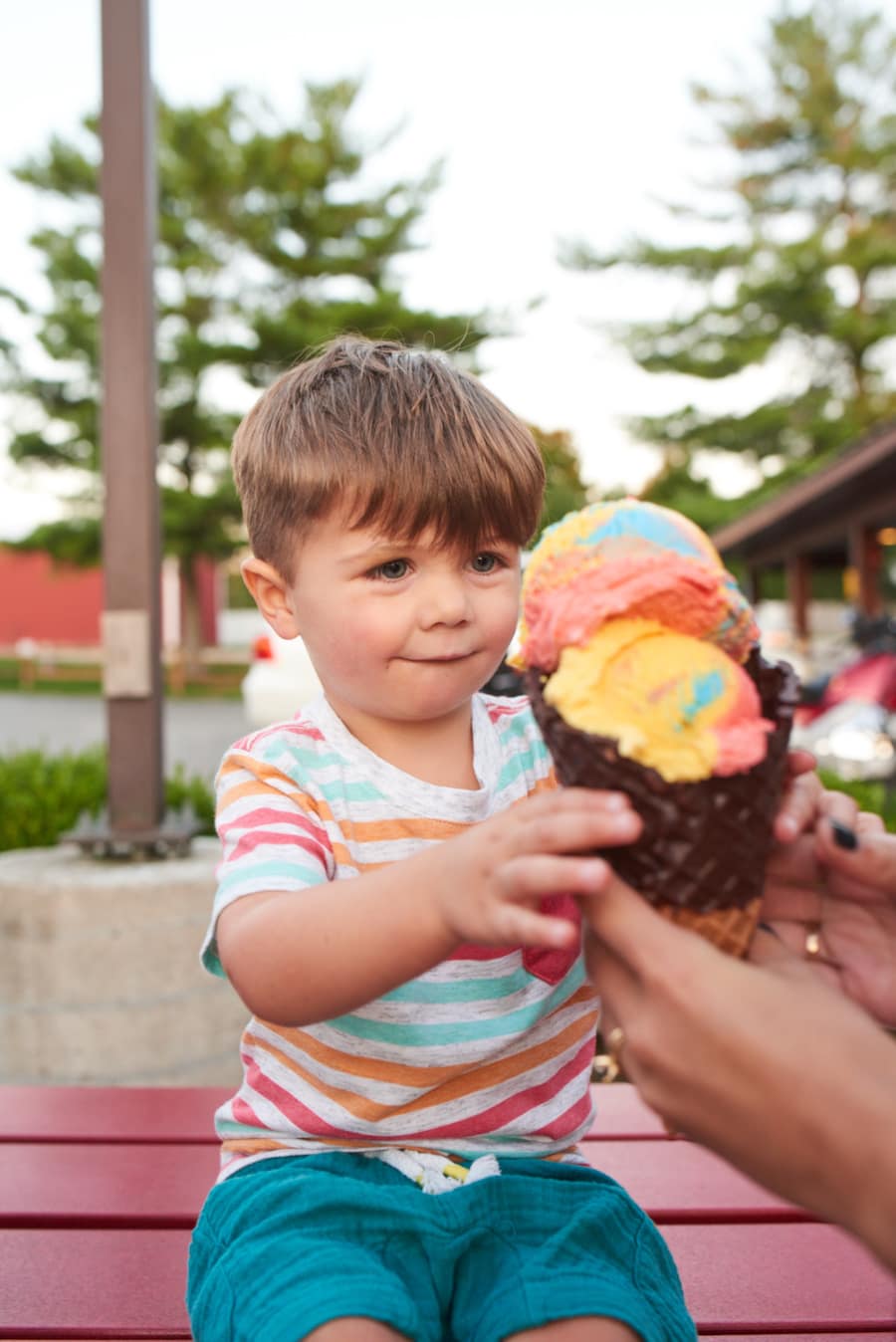 Have a birthday party: Order a birthday cake and it comes with a card and a coupon for a free cone.

Grow a little older: Come in to Moomers on your birthday and they’ll give you your age as a percentage discount for your order only. While 18-year-olds may shrug, 81-year-olds will be thrilled. Last summer, a 103-year-old made money on her small cone.

Yes, cut-sies: Every year on opening day (March 1) Moomers hands out one “golden ticket” to each patron. Redemption gets you one trip to the front of the line, no questions asked, during the summer rush.

When Julie H. Case isn’t writing about travel, wine, or weird science, she can be found deep in America’s forests, foraging for mushrooms, which she blogs about at soIgather.com. // Jon-Paul Allgaier photographs lifestyle, food, product and weddings from his base in Traverse City.