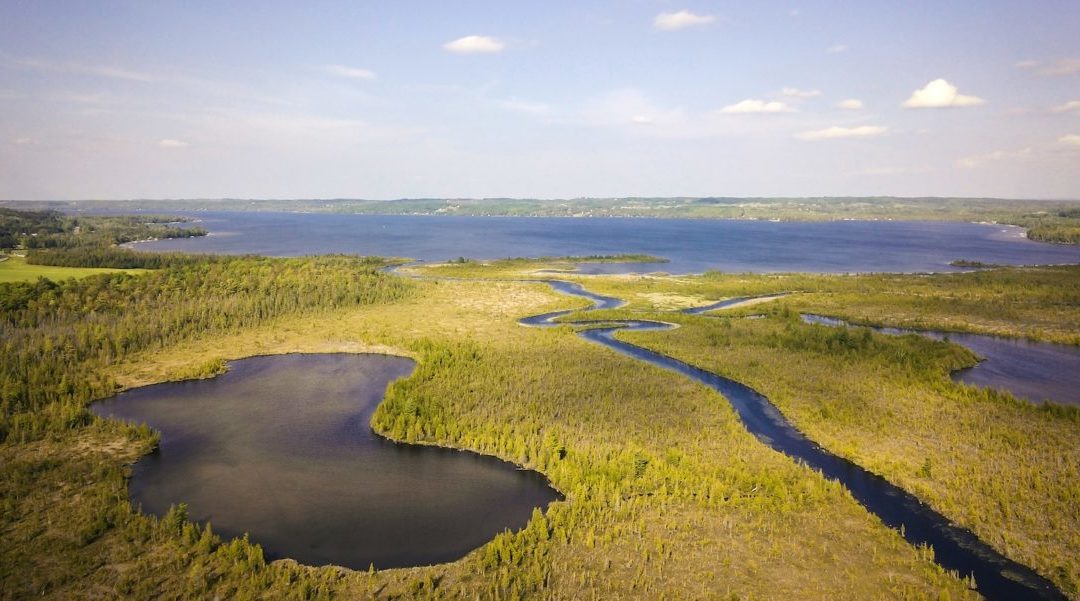 The Leelanau Conservancy recently closed on a land parcel adjacent to the Cedar River Preserve, growing the property to a total of 546 acres. This piece of land has been on the Conservancy’s priority list for nearly 30 years when founders Ed and Bobbie Collins first dreamt of protecting the undisturbed property filled with rare plants and incredible wildlife habitat.

When the parcel was listed for sale earlier this year, the Conservancy knew it had to act quickly. In addition to the property’s 20 acres of wetlands, it contains 60 acres of mesic northern hardwoods that shelter beautiful wildflowers like trillium and squirrel corn. An extended ridgeline overlooks a geologic feature known as a kettle hole, which with current high groundwater levels, forms a pond on the hillside. The ridge also offers sweeping views of South Lake Leelanau and the Solon Swamp.

The land is, in fact, one of the last large, undeveloped parcels overlooking Lake Leelanau. “It also represents the only viable way to reach the Cedar River Preserve on foot,” says Matt Heiman, the Conservancy’s Director of Land Programs. “At the base of the ridge the property includes 300 feet of shoreline on an unnamed inland lake connected to the Cedar River.” Some very unique and sensitive wetland plants such as rare orchids (grass pink and rose pogonia orchids), sedges and carnivorous plants (pitcher plant and sundew) exist in the area. The Solon Swamp is considered by many to be one of the wildest places left in Leelanau.

Almost simultaneously, a land swap with the State of Michigan that had been four years in the making was finalized. Conservation Easement Program Manager Yarrow Brown shepherded the process, where six parcels within the Solon Swamp changed hands. “We now own more than a mile of frontage along the mouth of the river and both of the inland lakes, and that’s huge,” Yarrow says.

“It is thanks to the support of our members that we were able to act quickly to permanently protect this wonderful property. We are thrilled to open these previously inaccessible lands to the public, whether it’s the spectacular ridge or the lowlands that lead to two small lakes. We think we can create one of the Leelanau Conservancy’s most remarkable trails, given the views from the ridge,” says Tom Nelson, the Conservancy’s Executive Director. “We look forward to connecting you with this piece of land.”

Stay tuned to the Leelanau Conservancy website and email newsletters for updates on when it will be open to exploring.