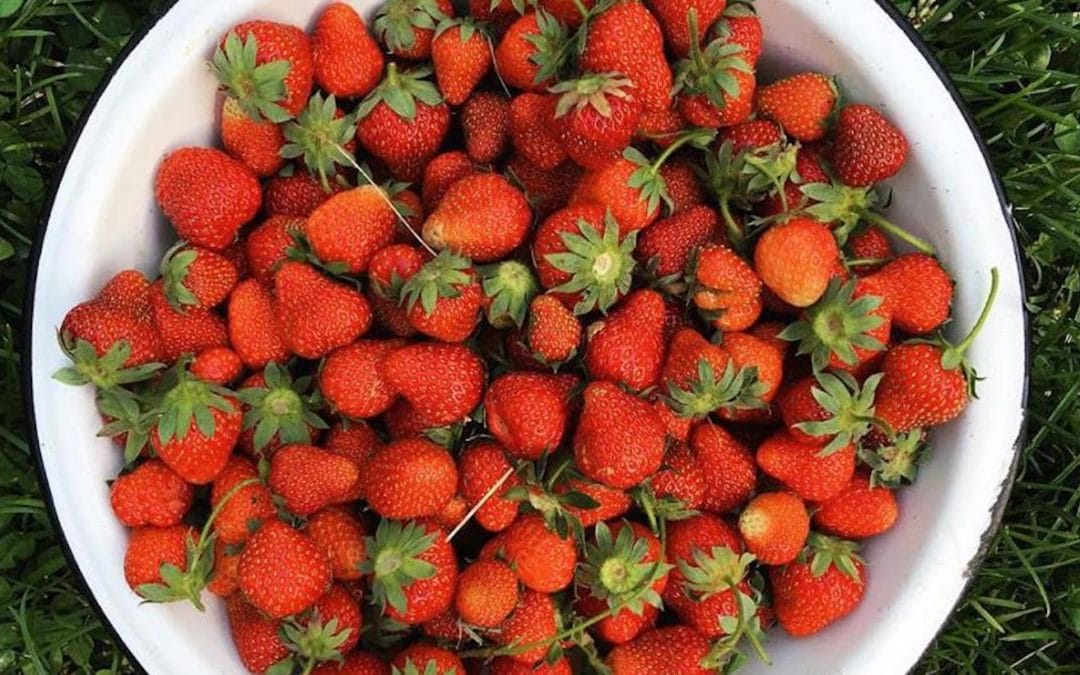 Neighbors gawking at my brimming bowls as they walked by cheerfully called me the Strawberry Queen.

The little blue house at the end of the dead-end street was so freshly mine that the “SOLD” sign was still staked in the front yard, but already I was thinking about where to plant the strawberries.

I hadn’t known that at the outset, that summer I worked on a Lake Leelanau farm, that strawberries would become significant for me. I did realize, early into my time as a farmhand, they were something special. For starters, of all the tasks I was assigned in the dewy mornings at the farm, working the berries’ lush green beds was never one of them. Maybe that’s what had initially intrigued me: The way the strawberries were treated like horticultural gold, to be tended to only by veteran workers who had put in the time to earn that delicate chore. But then, of course, there was the way they tasted. These were not the oversized, gauzy grocery-store strawberries I had dipped into powdered sugar as a child. These were dense and succulent and almost perfumed, so ripe they’d instantly crush to jam in your mouth. I was 25 and hadn’t known food could be transcendent.

At that age, though, I was restless, so I didn’t stick around long Up North. I pivoted my life instead to a nomadic chapter where each new spring found me in a new city and a new home. I was driven by the freedom of being young and untethered, but also by the fidgety feeling that the here and now was never quite enough. It seemed the grass was always greener elsewhere, and I chased it, so afraid of settling in with myself that I stopped bothering to hang pictures on every new set of walls.

But my short stint on the farm had seeded something in my heart: A passion for gardening. Through all the inner and outer unrest in the years after I left Northern Michigan, growing food became a calming constant, and so I did it in every way my unrooted lifestyle allowed: On back porches and window sills, in buckets and sawed-open beer cans, and even sometimes in the actual earth after pleading with landlords to let me dig up parts of their lawn. With each year I became more confident in my skills, but also more frustrated that my incessant wandering meant I was limited to greens and vegetables; I couldn’t plant fruit, or anything else that needed more than a single season to get established. The memory of those farm-grown strawberries shone in my mind every time I thumbed through another gardening catalog’s glossy pages. I was living a life based on annuals, I realized. I wanted perennials. I wanted to invest in something enduring, to grow something sweet.

I bought that little blue house. 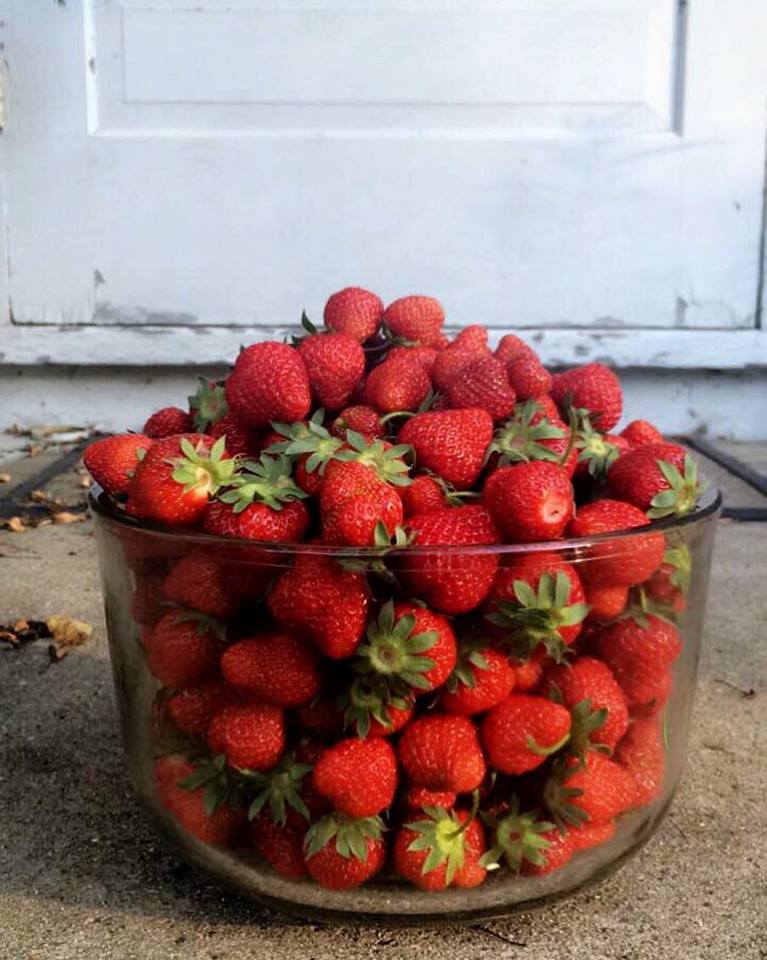 It was a WWII-era ranch, with a dated kitchen and its sole bathroom in terrible shape, but the thing I’d fixated on was the sun-drenched front yard just waiting for my spade. The strawberries, I decided, would go in the grassy city strip between the sidewalk and the street, in four-by-eight raised beds. I ordered starter plants from my favorite catalog, delighting in the varieties’ glittering names: Jewel, Sparkle, Honeoye. I watered them in and waited one year.

Weeks passed and the tiny things grew, plumping up before flushing with the first hints of red. By early June—my first anniversary in the home—a single berry had ripened ahead of the others. When it felt ready I plucked it from its stem, carried it into my house and sat down before putting it in my mouth. The burst of sweet juice took me back Up North. My eyes shut and I smiled, out of pleasure and pride.

Another June came, and another. The strawberry plants flourished. I painted the kitchen, re-tiled the bathroom, hung up pictures, picked staggering heaps of strawberries that I gave away to neighbors and tucked into my mailbox, flipping up the outgoing mail flag, for my mailman, Dale, to find. I liked how the strawberries made it easy to make friends, but I also liked picking the fruit alone in the evenings, when it felt like meditation: working the beds as dusk fell and fireflies rose up in the cool air around me. When it’d get too dark to see I’d head inside with my harvest, wiping my dirt-dusted hands on my jeans before settling in and eating the berries plain, straight out of my palm.

By the fifth June, it felt like I knew almost everything there was to know about growing strawberries—including that they don’t last forever. The berries were smaller and fewer by then; the beds were tired, the plants nearing the end of their five- to six-year lifespan. If you want a vigorous, continuous crop, I had learned, you must eventually move the plants, where they can sink their feet into fresh earth and start the cycle anew.

I could have built new beds, cleared space for future plantings, but the summer of my garden’s last hurrah found my life pivoting once again: I had fallen in love. This was love like a Lake Leelanau strawberry—at once simple and sublime, unlike anything I’d tasted before. 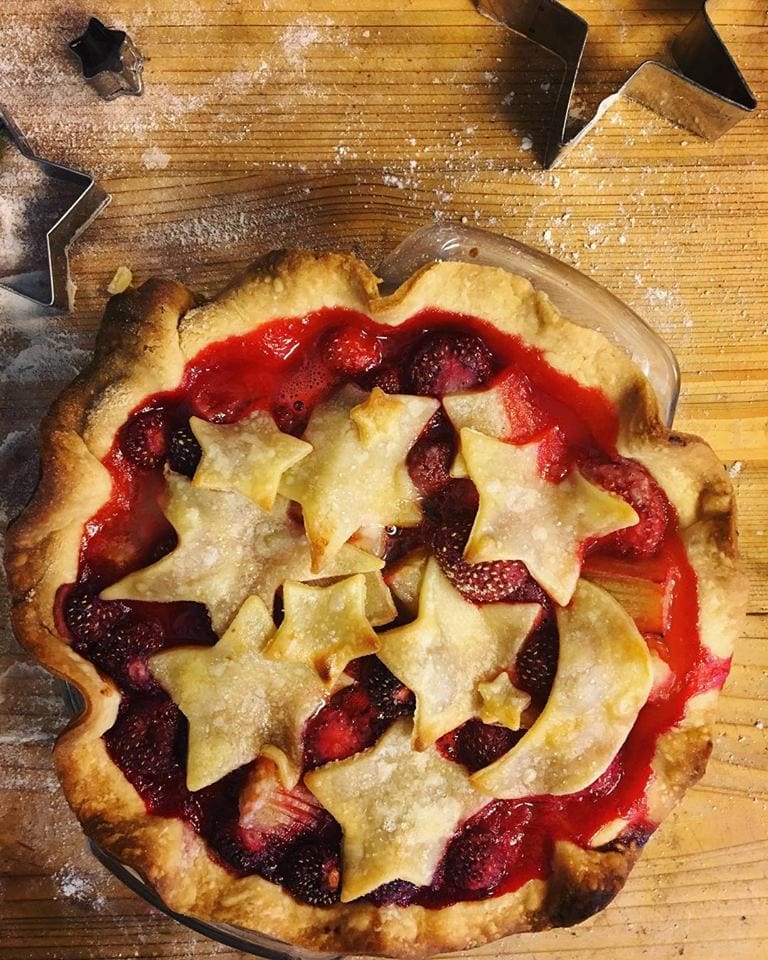 Of course, the great gift of my time in my home was that I’d finally come to realize the grass was plenty green right where I stood—or knelt, really, in the soft black soil of the garden I’d shaped with my own hands. But my heart told me this was worth another uprooting. We moved in together; a rental for now, but with sunny space for growing some greens.

At the heart of every strawberry plant is a knotty central stem; it’s called the crown. I loved that fact when I first planted them, and I found it poetic when I began clearing them out of the beds, scraggly and finally spent, in preparation to sell my home this spring. These crowns had proven to be priceless treasure, bearing not only fruit but witness to a quietly remarkable season of my life. I would gladly plant them again.