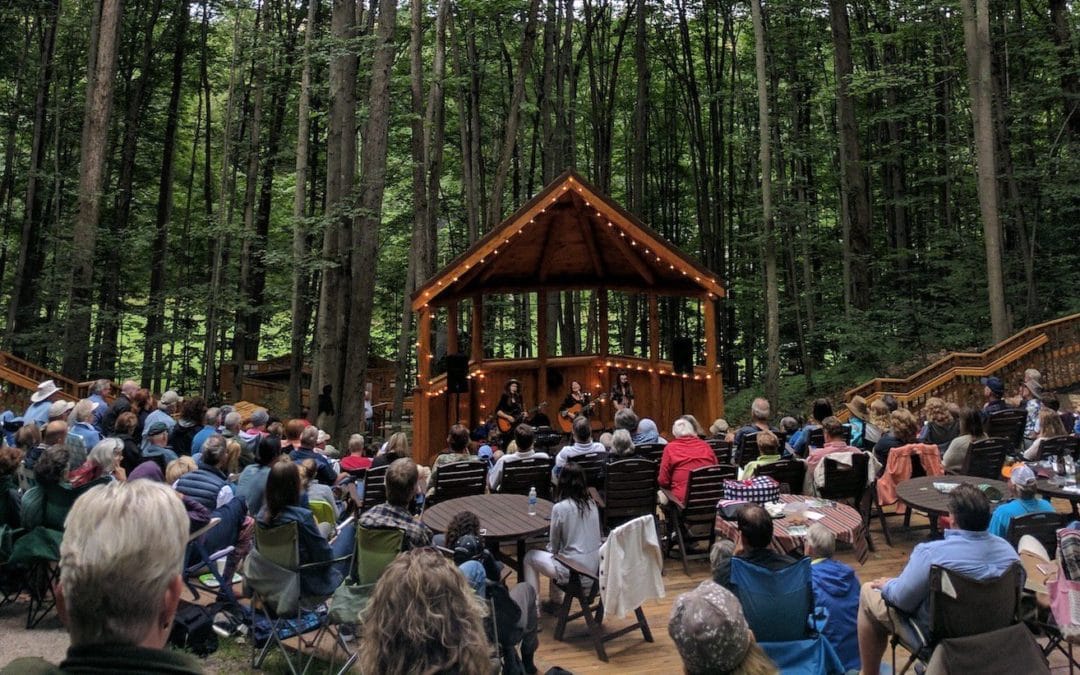 Music lineups have been announced and tickets are selling. Add these Northern Michigan music festivals to your summer bucket list.

When it comes to music, it’s hard to beat Northern Michigan for summer sounds. Between weekend festivals, week-long gatherings, and performances scheduled throughout the season, there’s enough music and enough variety for anyone and everyone.

The big kid on the block has long been Interlochen Arts Festival, with its mix of classical, rock, country, comedy, jazz and more. The season kicks off with Steve Miller Band, Marty Stuart, & His Fabulous Superlatives on June 25. Two iconic performers on the same night—this show won’t be forgotten anytime soon. Local legend Joshua Davis will be taking the stage in July with special guests Steppin’ In It. The summer also includes names such as Peter Frampton, Reba McEntire, Diana Ross and even Weird Al Yankovic. Plus, there’s a near-constant slate of shows featuring Interlochen campers. Here’s the full Interlochen Arts Festival lineup.

Great Lakes Center for the Arts

Further north, the Great Lakes Center for the Arts kicked off their season early in May with Bih Bad VooDoo Daddy. Continuing into the summer months as the warm weather arrives, they’ll be welcoming pianist Jorge Federico on June 21. Jorge has been lauded throughout the world for his superb musicianship, powerful technique, vibrant imagination and deep passion. Continuing through the summer, they’ll be featuring bands, classical musicians, tributes (think Frank Sinatra and Elton John!), authors and even the United States Coast Guard Band. See the summer program here.

Head to the north side of Petoskey for the Bay View Music Festival, the longest continuously operating chamber music festival in the country. Each year, Bay View hosts college students, music faculty and special guests. This year, the latter include Jefferson Starship, Texas Tenors and Durand Jones. You can also catch a host of pops, chamber and vespers concerts by music faculty and students. All performances and classes take place on the grounds of the community established in 1876 by a group of Methodists. It became a part of the Chautauqua Movement, committed to bringing religion, recreation, education and the performing arts to a broad spectrum of the public.

Like longer festivals? The National Cherry Festival always makes for a week of merriment, mirth and music. It features classic rock, country and more. This year’s festival kicks off June 30 with Trapt & Saving Abel with special guest Tantric. Other featured performers are Styx, Brett Young, Nelly and Josh Turner, and don’t forget your chance to become a Cherry Idol.

The Cherry Festival crowds aren’t your thing? No better way to get away from it all than an island hideaway, and no better time than the heart of summer. Beginning July 26 and running through August 3, Baroque on Beaver features chamber orchestra, chorale and various small groups, encompassing classical, pops, jazz and more. The festival celebrates its 18th year in 2019. (Read this Traverse Magazine feature about Baroque on Beaver.)

The free summer series at Grand Traverse Pavilions features a variety of performers each year and is always the best way to spend a Thursday evening. The 2019 Concerts on the Lawn starts June 6 with Dominic Fortuna. Other returning performers include Grand Traverse Pipes and Drums, Miriam Pico and The Drew Hale Band. The Bay Area Big Band and the Petoskey Steel Drum Band will also make an appearance.

West of Traverse City on the shore of Lake Leelanau is Fountain Point Resort. That’s where area favorites The Accidentals will showcase their unique mix of indie folk, rock, jazz and classical music on June 16. Tickets are available at MyNorthTickets.com.

Check out this video of The Accidentals at Fountain Point!

Glen Arbor’s Manitou Music Festival annually presents an eclectic slate of performers, and 2019 is no exception. Our local NMC Concert Band, soul music from Bumpus, folk from May Erlewine, Irish music from Réalta and so many more make this fun for the whole family. Plus, children 18 and under are free!

Next door to Crystal Mountain Resort you’ll find the Michigan Legacy Art Park. Its 2019 Summer Sounds Concert Series features Nina & The Buffalo Riders kicking it all off on July 5. It continues with Last Gasp Collective, The Go Rounds with Charlie Millard Band, Channing & Quinn, The Bootstrap Boys and the Ragbirds. Tickets are available at MyNorthTickets.com. Children ages 12 and under are free.

Music in the Park – Mackinac Island

Music in the Park is a free concert series hosted by the Mackinac Arts Council. Every Thursday night, nationally recognized musicians set up on the lawn of Marquette Park with the marina and Lake Huron as the backdrop. Sunny Wilkinson, Jetty Rae, Britney Stoney and Echoes are a few of the artists on the schedule.

There’s no need to travel far to experience world-class music in “America’s most beautiful place.” The Leelanau Summer Music Festival brings critically acclaimed artists performing classical chamber music from around the world to Cedar in Leelanau County. The festival opens with Ralph and Albertine Votapek Duo Pianists, then The Two B’s Music and closes with The Lange Choral Ensemble. Tickets are available at MyNorthTickets.com.

If day- or weekend-long festivals featuring a slate of Americana/roots music performers are more your thing, there are numerous opportunities to indulge across the region. Check out Spirit of the Woods June 15 in Brethren; Blissfest July 12–14 outside of Harbor Springs; Hoxeyville August 16–18, located in Wellston; Livelylands August 23–25 in Empire; and Wheatland September 6–8 in Remus southeast of Big Rapids.