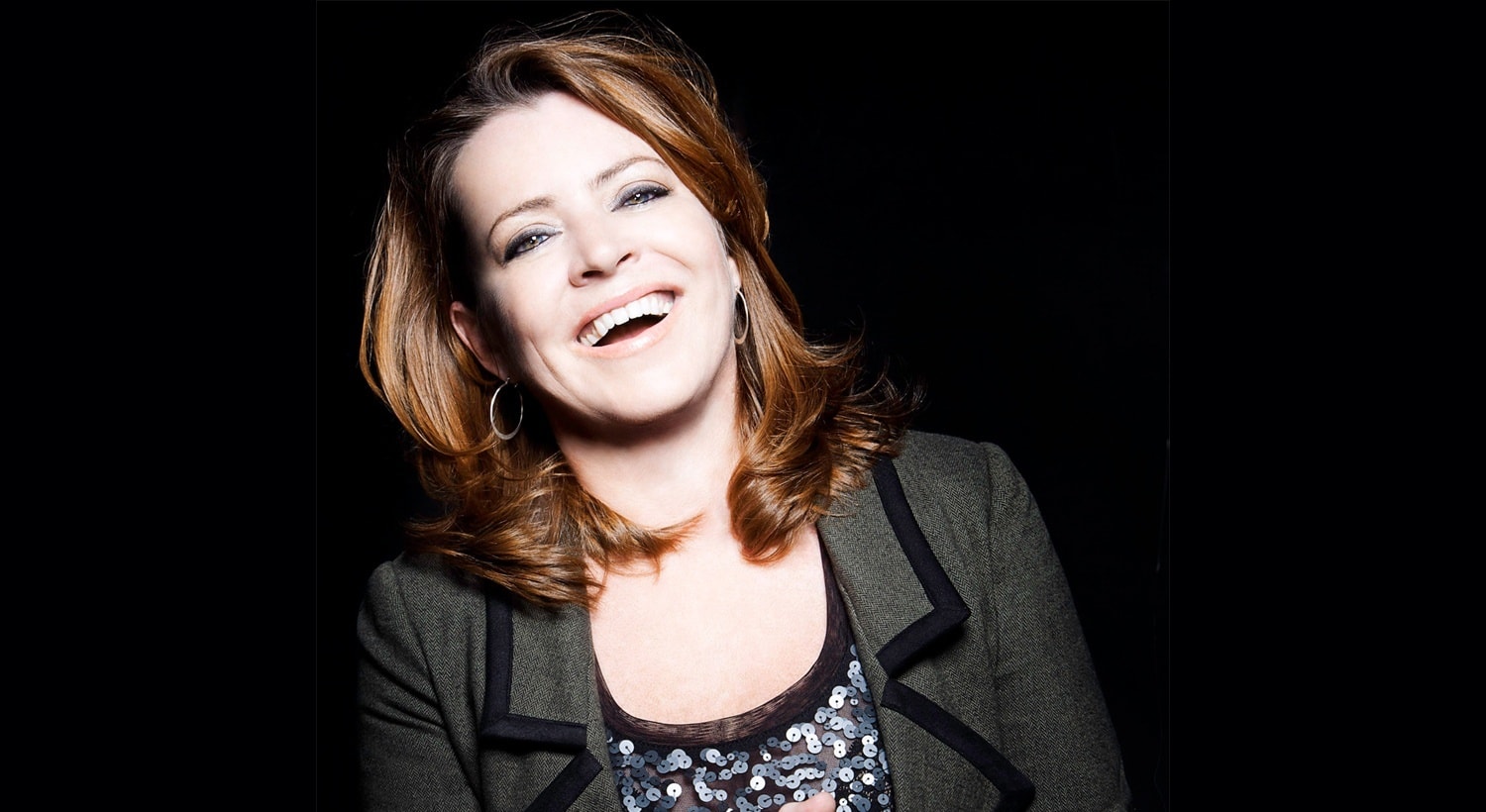 Comedian Kathleen Madigan is coming to Bay Harbor June 15 … and she wants to stay awhile!

Kathleen Madigan’s hilarious Hot Dogs & Angels tour, which has sold out theaters across the country, was supposed to wrap in June—just in time for her to squeeze in a little R&R at Lake of the Ozarks in her home state of Missouri.

But when the chance to perform this Saturday, June 15 at the Great Lakes Center for the Arts in Bay Harbor came up, she just had to bite.

The person Jay Leno calls “the funniest female standup in America” is packing her golf clubs and bringing her best pal Lewis Black with her to Bay Harbor. Get tickets to her show here.

“I’ve waited my whole life to come up there and have time to stay,” Kathleen says. “I’ve done Traverse City a few times. And I loved it. But I could never stay. When this came in, I asked my friend Lewis Black if he wanted to come, too. And we’re going to golf and hang out.”

Kathleen Madigan has been touring 250 nights per year and fitting in hour-long filmed specials and performances on every late night show ever made. (Check out her 9/7 appearance on The Late Show with Stephen Colbert.)

Her hour standup special Bothering Jesus is currently streaming on Netflix. Her new album of the same name premiered as the highest selling debut of any comedy album since 2014 and also debuted #1 on Billboard Comedy Charts and has remained number #1 on iTunes since the release. We caught up with this standup phenomenon for a funny 15 minutes … to find out why of all the places she can go on vacation she wholeheartedly picked Petoskey.

Get tickets to her show at 8 p.m. this Saturday, June 15 at Great Lakes Center for the Arts.

So, you already know that Michigan is beautiful:

Emily, I already have tee times. Standups NEVER get the perfect timing for gigs. We always get the town in the wrong season or when we can’t stay…this one lined up perfectly. I was so excited. People never think about vacationing in the Midwest—Wisconsin too, gets a short stick—I’m making a vacation out of this gig. Fishing and golfing …

Your tour is called “Hot Dogs & Angles.” Before that: “Boxed Wine & Bigfoot.” Do everyday pleasures and miraculous figures intersect like that in your daily life?

It’s the lifestyle I accidentally lead, I guess. I’m usually thinking about drinking at some point and having fun. That’s probably when people are like, “How come you don’t have a TV show?” or “How come you don’t want to be in Los Angeles?” I say because I don’t want anything harder than I am doing right now. I like traveling. I like seeing what’s going on. I went to perform in the Upper Peninsula—in Harris, Michigan. I flew into Green Bay and drove. I saw deer, forests. When am I going to see houses? Who is going to come to this show? It is truly the wild. The guy in charge of the show was awesome. The casino was very nice. And people came! I am interested to meet people who are like “yeah, we are kinda off the grid … and we like it.” I just find it more interesting.

And on the topic of hot dogs … your favorite way to eat one?

Does being a Midwesterner inform your comedy?

I think there is a humility/underdog attitude in the Midwest, because we don’t think we are the coolest. It’s sort of an observational thing. We are like the middle child, with New York and the East Coast being the oldest in the family. And they are successful and they dominate, and they’re globally known. California being the youngest child—they are like the hippy child and they do what they do. But the middle one, just kind of watches everything going on, and I feel like that’s what we are. But it’s in a good way and it’s where I choose to be. Because I lived in California and I could not wait to leave. I’m probably in the minority about that. It’s sunny and nice every day but that’s not normal. It’s not for me. When’s the rain coming?

So, Midwest Nice or Midwest Polite. Is that a real thing?

Writer Robert Ham says you make people feel like part of the family. That you are “the bawdy aunt that won’t mind if you take a sip from her wine glass.” Is that sense of warmth why people are so comfortable laughing with you?

It’s funny, I have done charity shows with Lewis Black and he’s Mr. Ranting and Raving. And after the show, people come up to him and say, “Thank you for everything you say. I really appreciate someone saying what I feel.” And then they come up to me and go, “Do you want to go out, we are going to have beers across the street?” And I say, “See, Lew … they think you are smarter than me, but they want to be with me!”

Anything people coming to your show at the Great Lakes Center of the Arts should be ready for?

Get ready to laugh. I always hate doing shows when it’s light out but you can’t stay out all day. It’s weird for us, too, to go to work when it’s still light out … but we’ve done it in Alaska so we can do it in Michigan. And I’m not even kidding, there are places I’ve waited my whole life to come … it’s so rare for it to work. Maine is another one on my list, but I finally nailed it for the northern part of Michigan.

—We’re happy to have you, Kathleen.