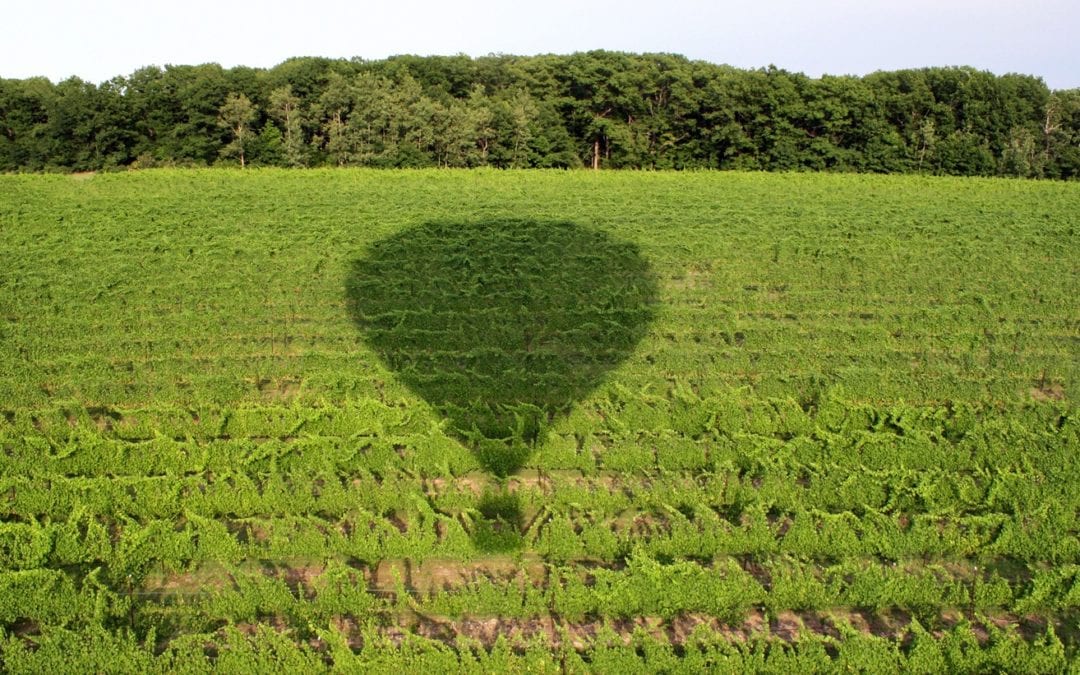 He’s flown over the Serengeti in Tanzania, volcanoes in Costa Rica and the rolling rice paddies of Japan. These days, Jeff Gilles, pilot and owner of Traverse City Balloon Tours, is sailing the skies over Grand Traverse Bay.

I pull into the parking lot at Roy’s General Store at the corner of Three Mile and Hammond in Traverse City. It’s a cool, overcast evening and Jeff Gilles is already there, prepping for our sunset flight. A dense wicker basket is strapped onto the white, 15-passenger van behind him, surprisingly inconspicuous stripped of its vibrant balloon.

I am soon joined by Jody and Nadine, a couple visiting from central Florida. They vacation at a family cottage on Lake Leelanau every August, and this flight was Jody’s 70th birthday present to Nadine, something that’s been on her bucket list for ages.

Presented with a clipboard, we each scribble our signature onto the appropriate line, signing our trust over to Gilles. Our faith is well placed; he’s one of the most experienced hot air balloon pilots in Michigan having taken his first flight in 1978 at just 4 years old. Since then, he’s piloted about 5,000 flights, bringing more than 40,000 passengers along for the ride.

I had asked him the day before if he was ever worried about falling out of the sky. He responded with a chuckle: “Definitely not.”

The three of us are ushered into the massive van. Devin Dante, a hop farmer by trade and Gilles’ assistant for the evening, crawls into the back. He will follow our path from the ground, driving the truck to pick us up upon landing.

As we head toward Old Mission Peninsula, the topic of air flight inevitably arises. Dante pipes up from the back bench: “Did you know that Ohio has the most astronauts per capita?” He pauses for dramatic effect. “There’s something about that state that makes people want to flee the Earth.” We all chuckle.

Soon we abandon the pavement and pull onto a grassy field in the middle of Black Star Farms’ vineyard at the base of the peninsula. Gilles hops out and releases a black pibal, short for pilot balloon, into the air to monitor the direction of the wind. He does this twice more, driving us deeper and deeper into the vineyard before he’s satisfied with our location. He and Dante rock the basket off the back of the vehicle and start laying out the balloon, unraveling all 300 pounds of fabric onto the ground.

An industrial fan is pulled out of the van and angled toward the gaping mouth of the balloon. The fabric flutters to life, hastily inhaling gusts of air. As the balloon billows and grows, colors rising above the vines, Gilles leans against the basket and releases a burst of liquid propane that ignites. The resulting flame encourages the balloon’s ascension upward, and before long, it’s hovering perpendicular to the ground, holding 105,000 cubic feet of air. 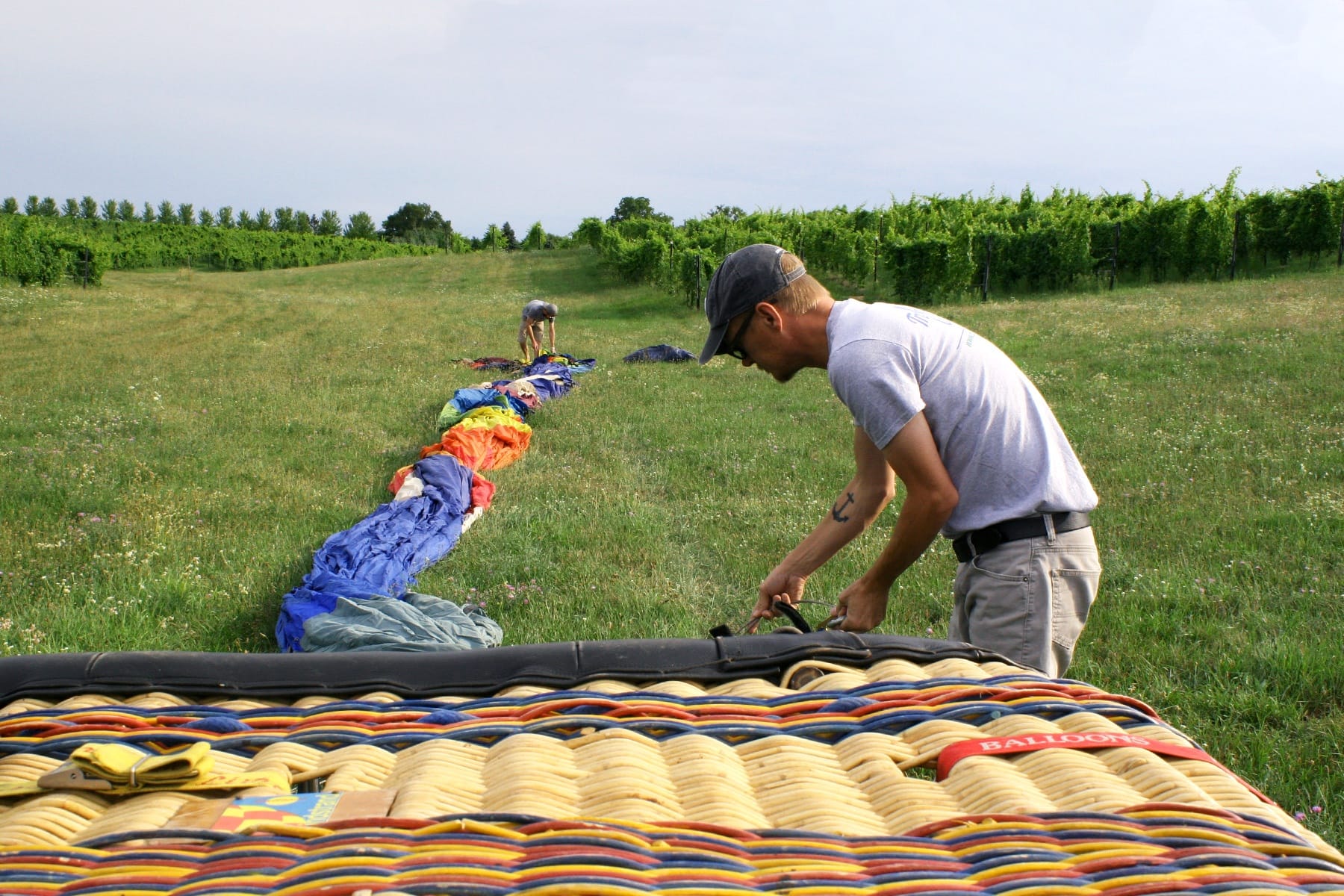 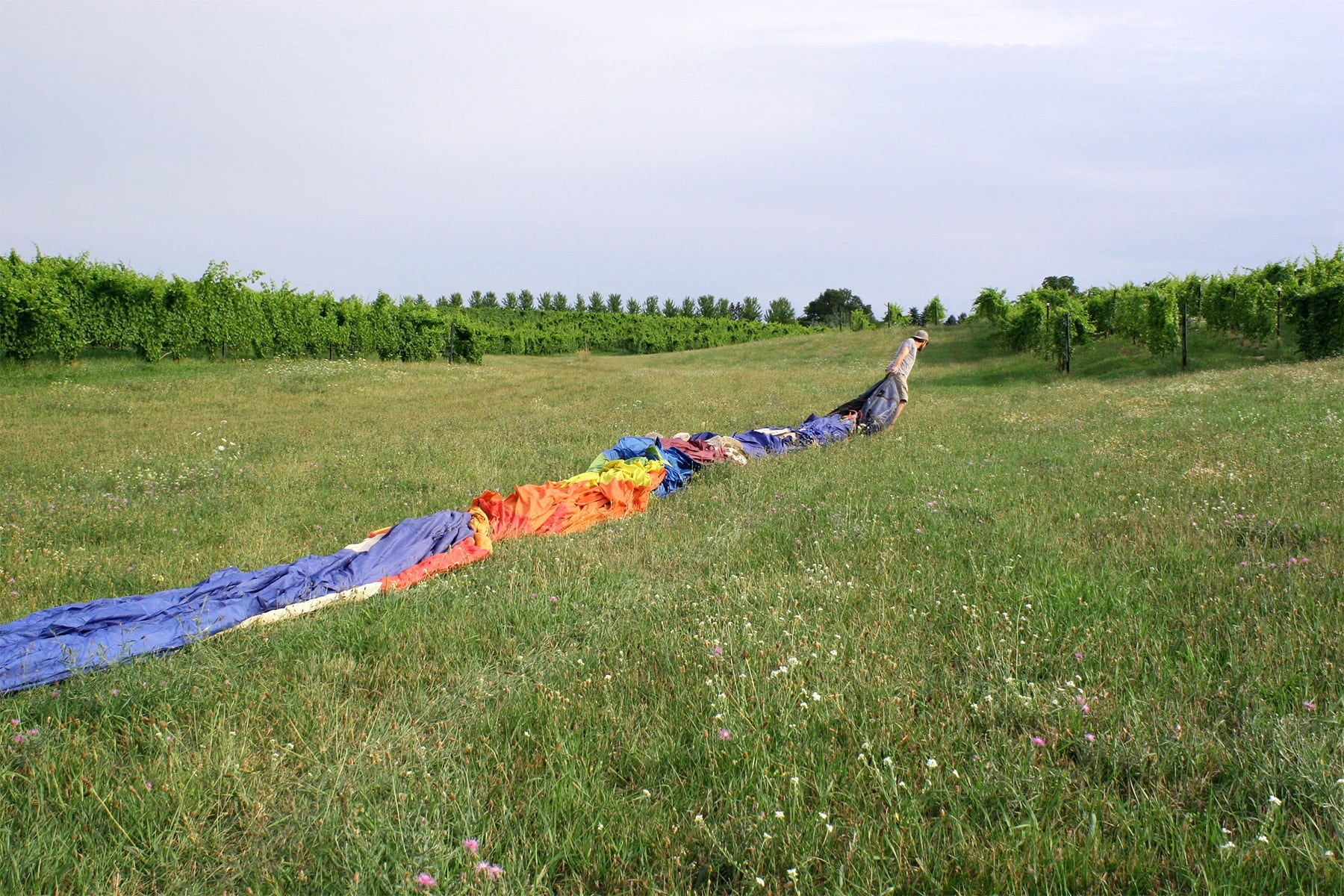 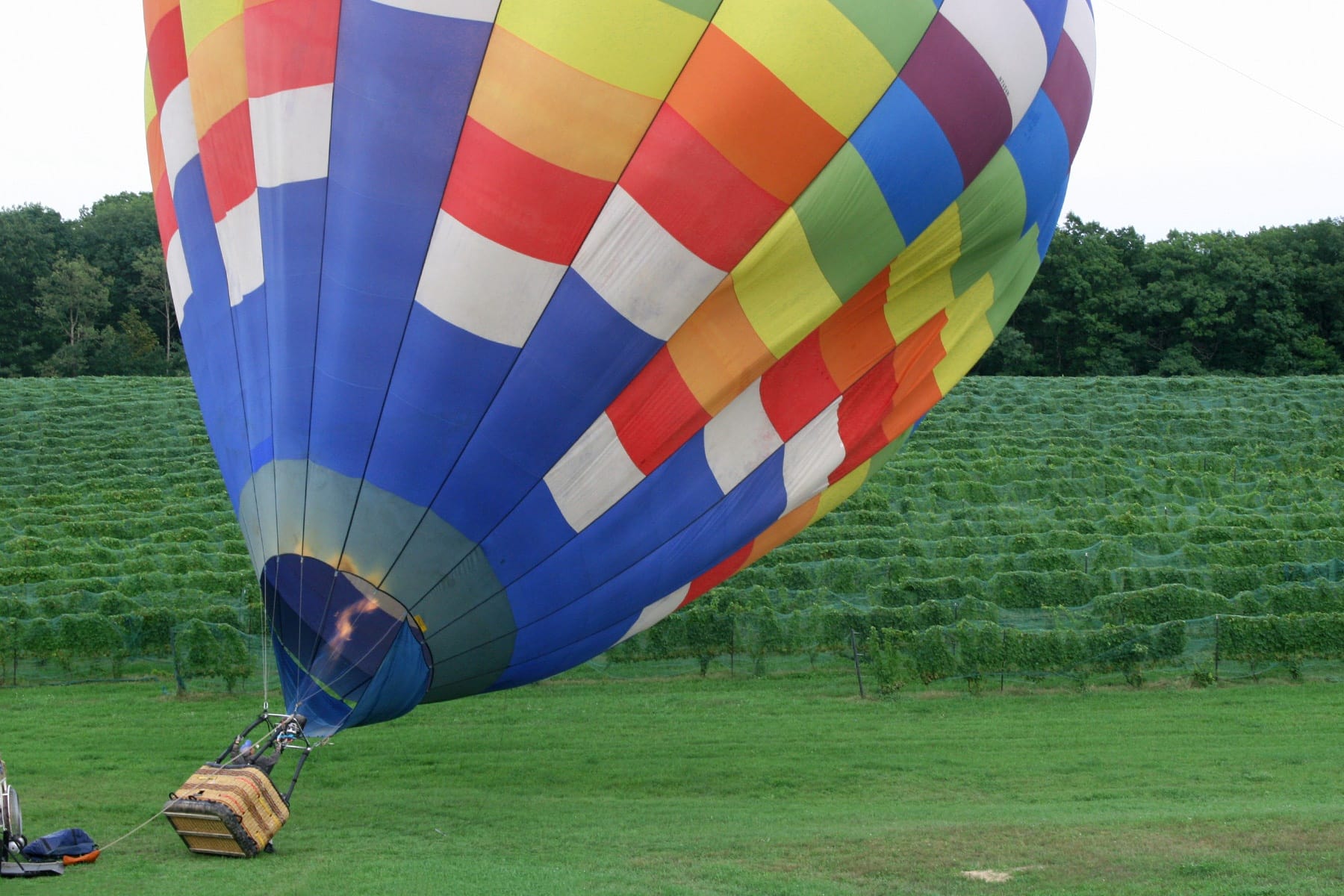 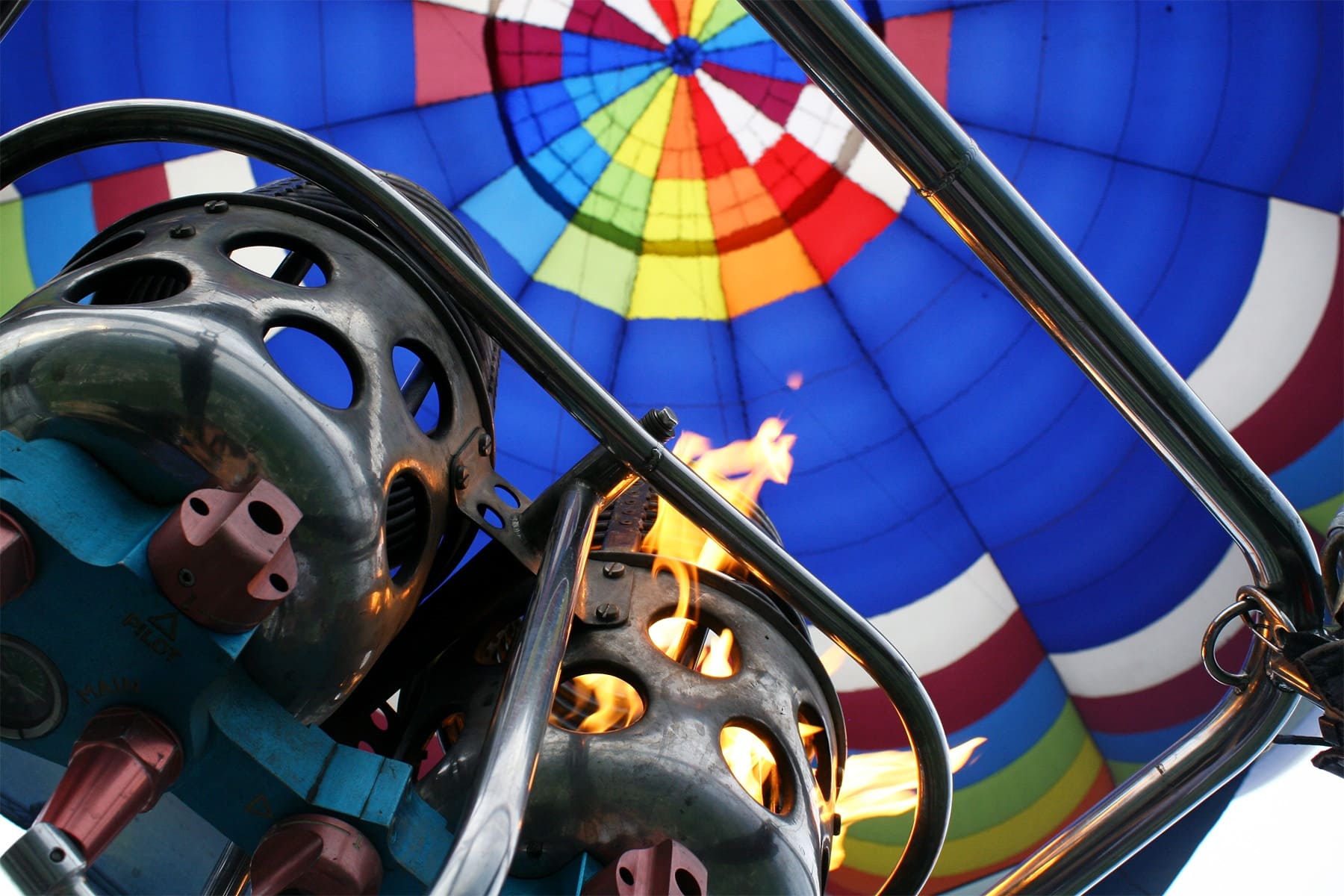 As Gilles prepares for take-off, we’re encouraged to get in the basket. Standing on the outside, the leather-bound rim meets my rib cage, but no ladders are offered. My entrance was far from graceful, to put it mildly.

Once we’ve each claimed a side, the basket bounces clumsily against the ground a few times before the air inside the balloon is warm enough to rise above the earth. Barely a moment passes and we’re floating 1,000 feet above the vineyard, drifting toward Grand Traverse Bay. And it’s magic. Pure magic.

The horizon is blurred in a blue haze. Landmarks drift by beneath us. Our shadow migrates along the shoreline and ducks scuttle across the water in fear of our alien aircraft. A dog chases us across lawn after lawn, barking and protecting his humans from this strange, colorful bird. Children squeal in delight and wave. 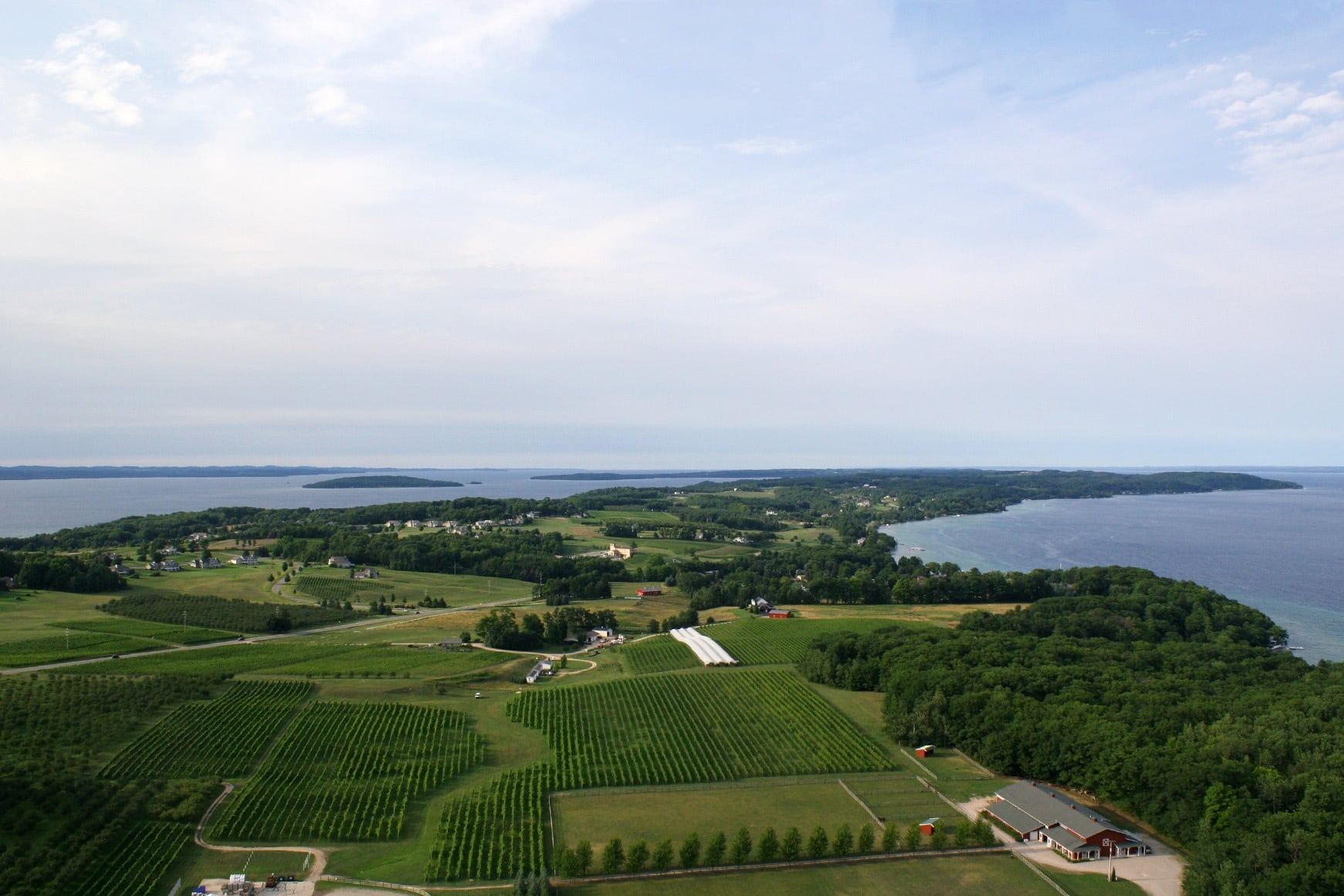 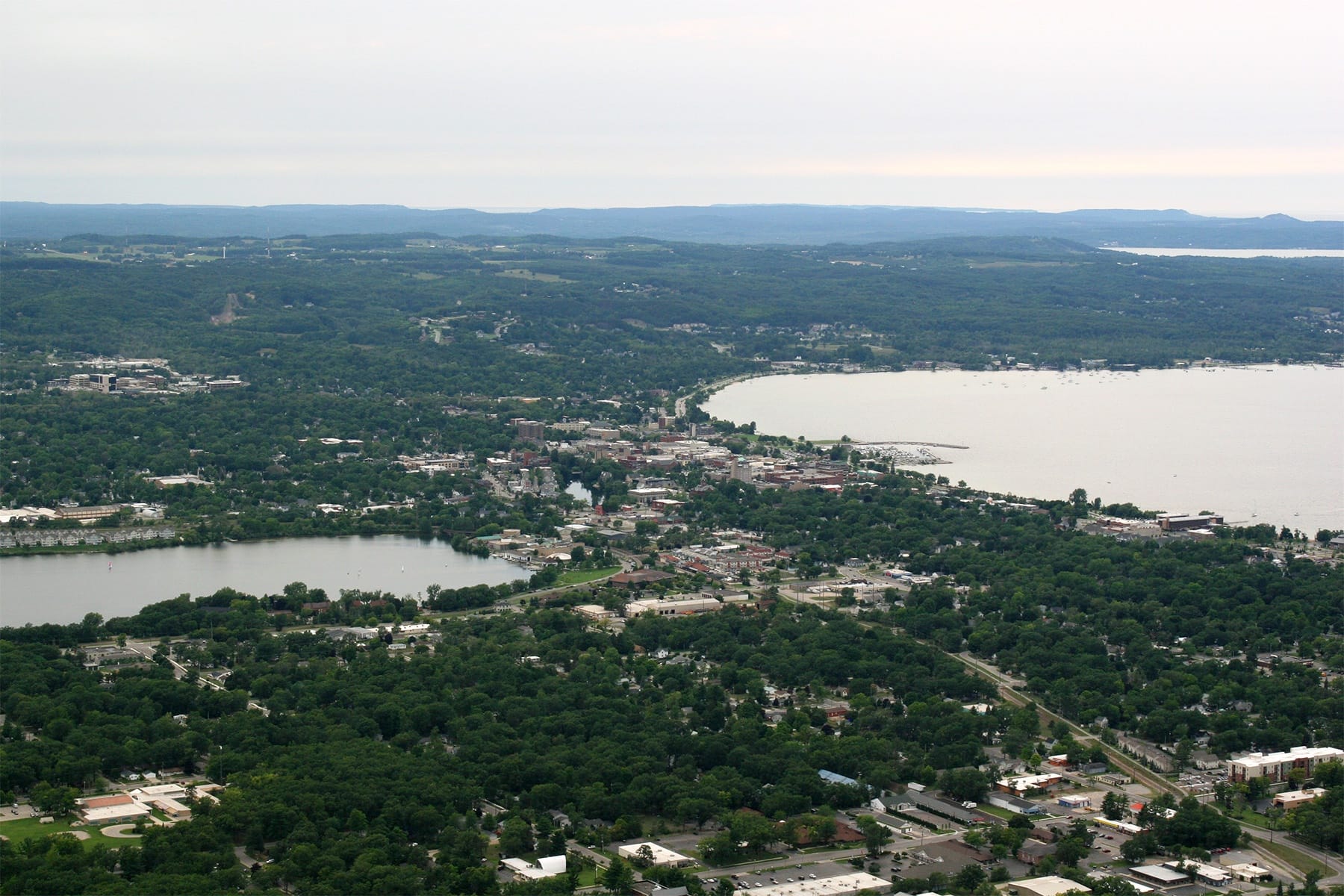 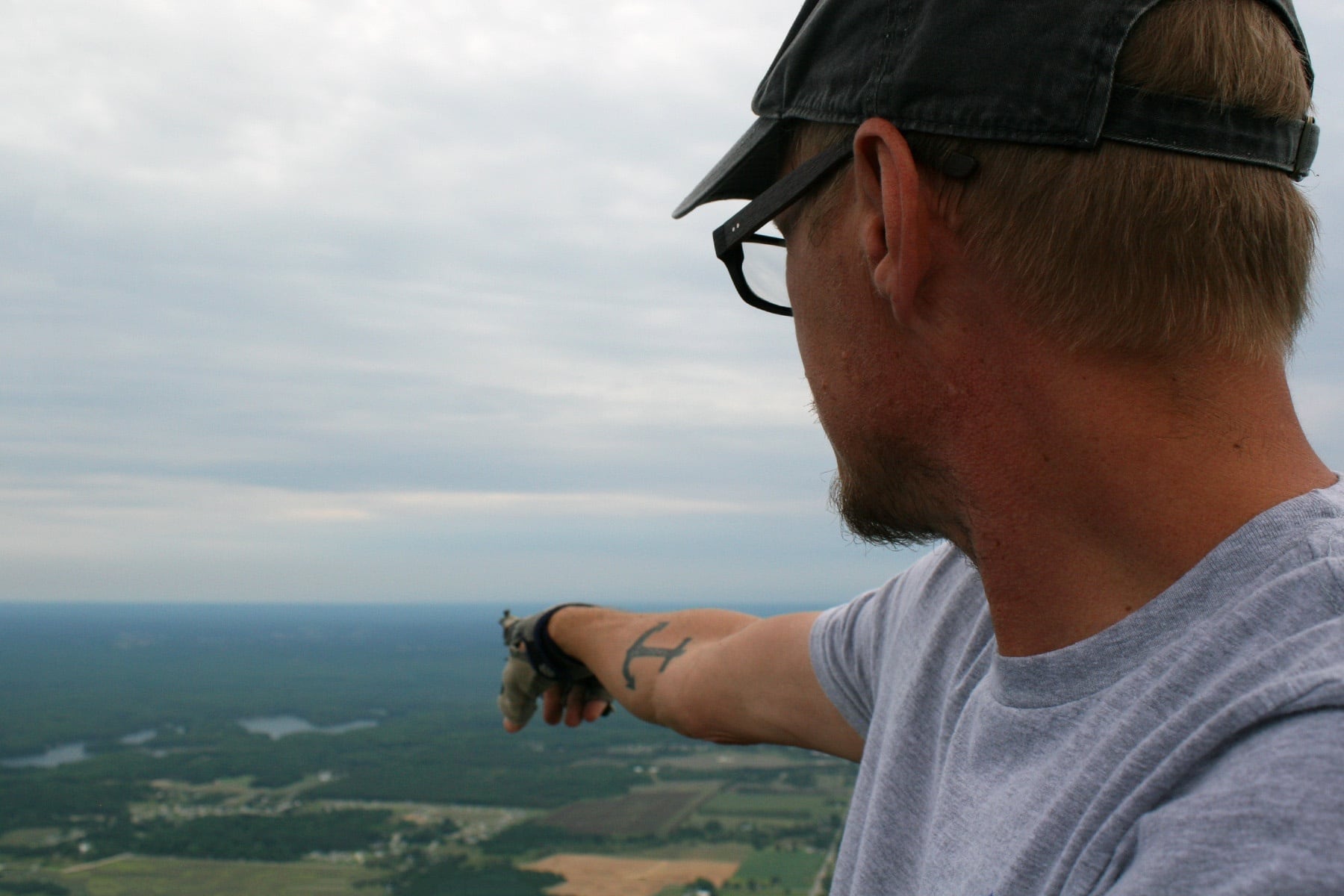 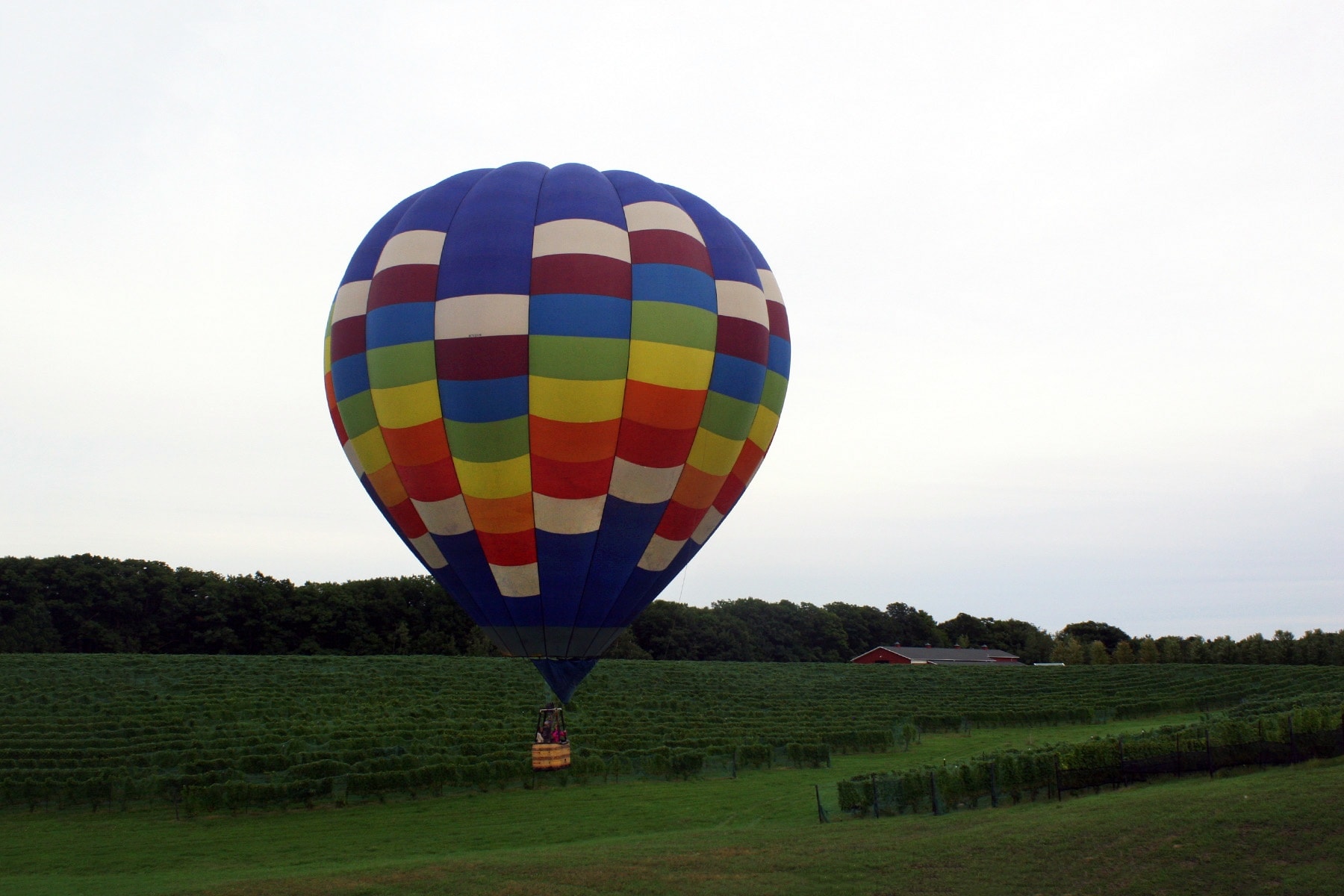 Perhaps it’s not surprising that Gilles discovered his passion for hot air balloons as a child. His father, a military helicopter pilot during the Vietnam War, was desperate to find a way back into the sky after returning to the US. Airplanes and helicopters proved to be too expensive, so it seemed like fate when a relative purchased a hot air balloon. Years passed and Gilles’ father’s adoration for the balloon soon became his own.

“As I was growing up, I knew that’s what I wanted to do,” Gilles says. “I idolized and admired people who were flying balloons for a living.”

In 1992, Gilles got his pilot license at the adventurous age of 18 and was ballooning for corporations like Famous Footwear and Rayovac Batteries by 1995. While business was booming during the summer months, Gilles found himself with a lot of downtime in the offseason, so he began traveling around the world, flying rides in Australia, Africa and South America. To date, he’s flown over five of the seven continents and about 35 states. “I feel that having a career that is seasonal has opened the world up for me. For the last 25 years, I’ve been able to live and work in areas others only get to vacation in,” Gilles says. “Plus, being able to make a living out of a passion makes for an amazing life.”

For the past 12 years, he and his wife Julie have called Temecula, California home. In fact, they still do during Michigan’s moodier seasons, returning to manage their wine tour and ballooning businesses in the fall. But when Gilles saw that Grand Traverse Balloons—a company he’d had his eyes on for years—was for sale, he convinced his wife and business partner to venture to the Midwest. As you’ve probably gathered, they fell for Northern Michigan and ended up purchasing the business in January 2018.

They’ve since rebranded to Traverse City Balloon Tours and are operational May through November. Gilles spends his summers soaring with locals and tourists over the rolling vineyards, cerulean waters and bustling cityscape that make this place so iconic.

Gilles pulls on a cord that releases a yawn of hot air and we begin our descent over a grassy field on the east side of town. After we’ve all made it safely out of the basket and reunite with solid land, Gilles recounts the tale of the pioneers who came long before him as he presents a bottle of bubbly.

“It’s a tradition that dates back to the very first balloon ride,” explains Gilles. “When the Montgolfier brothers first flew their balloon, they were attacked by people thinking they were demons or a fire-eating dragon. And so, in subsequent flights, they started carrying Champagne to prove they were French and civilized. We do the same; we carry local sparkling wine and share it with the people we meet upon landing.”

The winds have welcomed you with softness.
The sun has blessed you with its warm hands.
You have flown so high and so well that God has joined you in laughter
and set you gently back into the loving arms of Mother Earth.

Things to Do in Traverse City