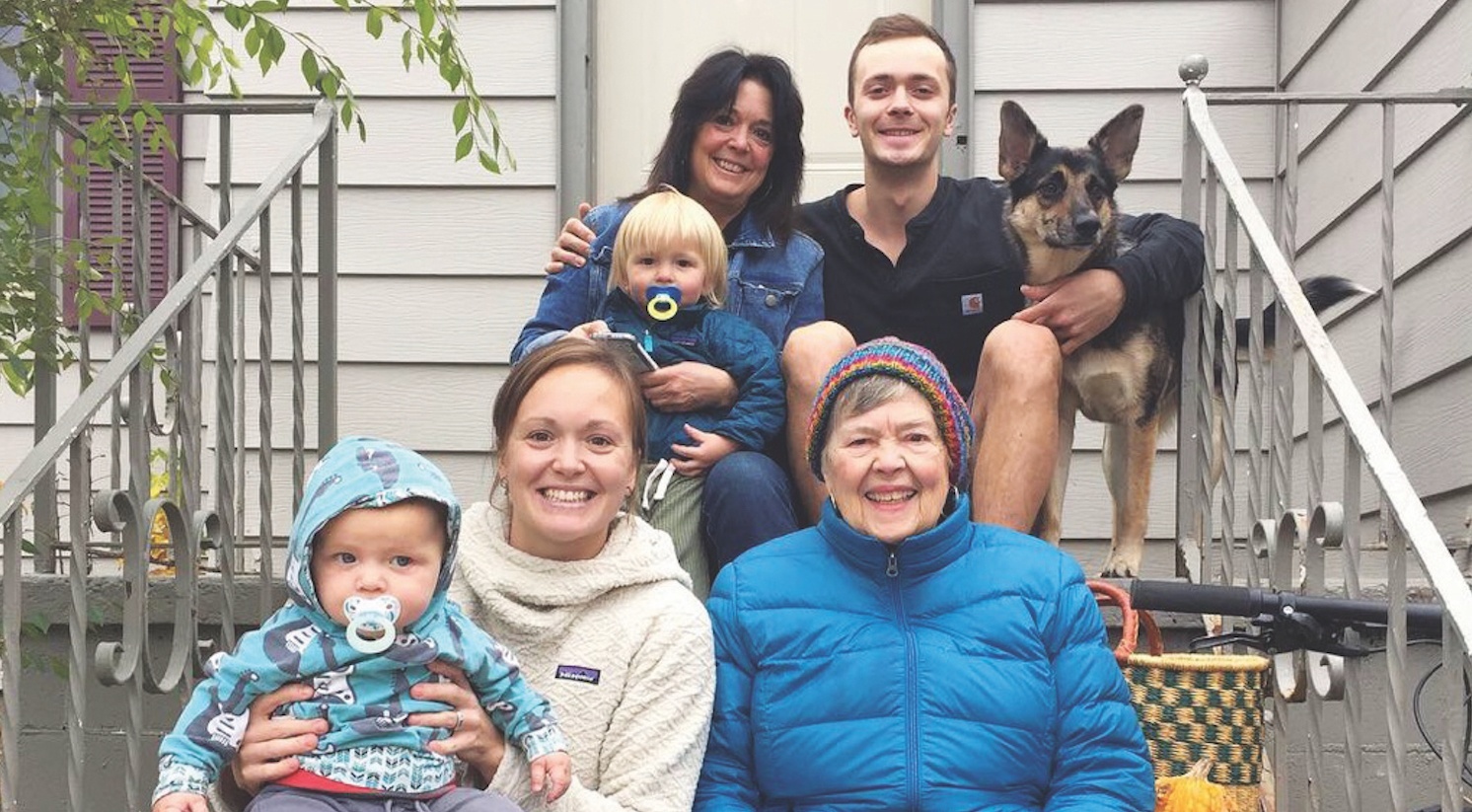 Four generations. Two Peninsulas. This Michigan family’s Upper Peninsula road trip is not one they will soon forget.

I’ve dressed for the occasion: a red and black flannel lumberjack shirt—just the thing for a weekend in the Upper Peninsula. Walking-checkerboard that I am, my daughter, Cassidy, spots me easily outside my office at MyNorth Media in downtown Traverse City. She pulls into the parking lot across the street and we squeeze my overnight bag into the hatch that is already stuffed with a portable crib, strollers, diapers, duffels … the essentials needed to mobilize the tow-headed duo strapped into their seats in the back. Silent for the moment, they are Ethan Robert Fisher, just over 2 years old, and his 6-month-old brother, Simon Chase Fisher; my grandsons.

Their great grandmother (Cassidy’s grandma, my mom … you get it) is in the passenger seat. Mimi is 86. The plan is for Gamma Liss, as I am called, to wedge her hips between the boys’ car seats for the nearly five-hour drive. Our dress rehearsal several days before proved that it worked. My daughter and I have joked that we are crazy to attempt this trip. But with teamwork, we got this.

It is a joyously beautiful trip up the Lake Michigan coast during which we call out bridges to Ethan—over the Elk River, the marvelous drawbridge in Charlevoix—and promise him one big, giant, huge bridge to come. And not long after that, we will see Uncle Keef. My youngest child and only son, he is in his senior year at Northern Michigan University and the purpose of this trip.

Born on her birthday, Keef is the light of Mimi’s life—a devotion Keef has always returned, but in double measure since my divorce nearly a decade ago, when Grandma was a sweet island of comfort in his life. Mimi wouldn’t miss this trip to see Keef for the world. Just how epic it is for her, however, is spelled out in her confusion over the geography of our route. A brilliant social studies teacher who could once name the Great Lakes in her sleep, she can no longer envision a mental map of Michigan, Huron and Superior. As Cassidy and I gently work to remind her of the shape of Michigan and where Lake Michigan meets Lake Huron under the Mackinac Bridge, Ethan crumbles a pink wafer cookie to the consistency of glacial till and smears the backseat in sticky streaks. Meanwhile, Simon, whose serious, blue-eyed stare has all but penetrated me down to our shared mitochondrial DNA, begins to howl.

This happens as we are about to cross the Mackinac Bridge. And does any Michigander ever really take that lightly? The people of our state come in two distinct categories: the inside-laners who prefer bumping across the noisy grate-covered lane to driving perilously close to the bridge edge; the outside-laners who breeze along, making sure to take their eyes off the asphalt ahead of them to soak in that beautiful blue over the railing. My daughter is an outside-laner.

Three hours later, as the iron-ore docks and smoke stacks of Marquette Harbor come into view, we have Ethan chanting “Uncle Keef, Uncle Keef, Uncle Keef …” Not long after we are settled into our motel, my son appears, bearing Thai carryout from our beloved Rice Paddy restaurant. It’s not just Ethan bouncing off the walls with excitement.

The next morning, Keef tells us he’d like to take us on a hike along the Dead River Falls. He will carry Simon in a front pack; Ethan will be on Cassidy’s back. My only job is to keep up. Sadly, there is no way to bring Mimi on this trail that winds over rocks, a jungle of exposed tree roots and along a cliff. But Keef assures her he has a treat to make up for it.

So before our hike, we follow his car as he drives, up, up, up a washed-out dirt road that switchbacks Marquette Mountain. Near the top, he pulls onto the shoulder and we do the same. “Come with me,” he says as he opens the passenger seat door to gently help his grandma out of the car.

Facing a slight slope littered with boulders she pauses, bewildered. “You can do it,” he says, taking her arm. I take the other, Cassidy and her boys follow behind. She struggles, but proudly, and we make it to the top. Dizzying feet below, a hearty swath of our country’s Northern border is mapped out in cobalt blue. “I thought you’d want to see this view, Mimi,” Keef says. The jolt of beauty, the expanse of sky and Lake Superior, the sense of accomplishment, the fact that her grandson had done something so special for her—it is almost beyond her comprehension. She stares, blinking, processing, thanking. From her jauntier step back down to the car, we know she grasps the significance of his gift to her.

That night, with our hikes precious memories, Mimi and I sleep like babies. Not so for Cassidy in the room next door. I notice the gray circles under eyes as we hug Keef goodbye.

She takes the wheel, but when I see her fight to stay awake I insist on driving; she relents. We swap seats in Munising, and two hours later, as the car hums over Big Mac’s inside-lane grating, my passengers are all asleep. Except Simon. The reflection in the baby mirror catches him wide awake, gazing adoringly at his mama’s sleeping face.

Read: The story behind the greatest 5-mile road trip on the planet—the Mackinac Bridge.