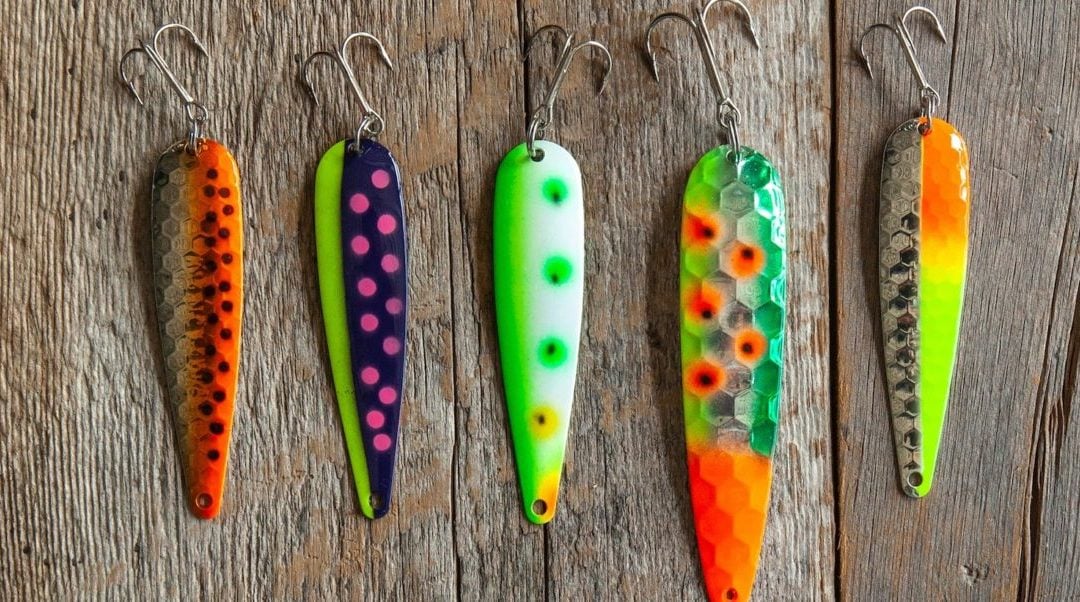 A good story needs a good hook. In this case, the hook is the story. It’s the barbed end of artificial lures named “Dirty Pink Panties,” “Blueberry Muffin” and “Toxic Toad.”

These are metal spinners lowered into the water on fishing line by fishermen standing in a 12-foot-square space in the back of a boat trying to catch the multi-billion-dollar Great Lakes earning spike; the elusive salmon. At up to $28 per pound, it’s a fish market treasure. Catching one all depends if the water temperature is right, the current steady, electronics working correctly, bait fish plentiful and the lure enticing …

So, with visions of Ernest Hemingway battling a giant tarpon within site of Havana and the gritty New England fishermen of Wicked Tuna fame, four of us headed out for an afternoon of charter fishing on Lake Michigan.

Our boat is the Talon, a 31-foot Baha Sport Fisherman moored at the North Star Marina in Betsie Bay, 32 miles south of Traverse City. Calmed by the breakwaters at Elberta and Frankfort, Betsie Bay protects four marinas housing more than 30 fishing charters all ready to do battle with whatever Lake Michigan offers.

Our captain is Rich Haslett, one of 600 licensed charter captains in Michigan. Rich is a veteran of 30 fishing years, not only in Northern Michigan but also in the “Little Great Lake,” Lake Erie. Rich’s crew consists of his wife, Linda, and their daughter, Jenny, a registered nurse.

The crew of the Talon charter twice a day (5:30–11 a.m., 3:30–10 p.m.) all summer. Today, they have four guys ready for action… or as much action as their combined 288 years will allow. None of us under 70 years old and with the boat boasting a “stand-up marine head,” this is perfect! The crew does most of the work, and the old guys comfortably reel in the fish.

At 3:30 sharp, with snacks, cameras, jackets and sunscreen loaded onboard the Talon, and with a calm afternoon and the bright sun shining on aqua waters, we motored out 1 mile from shore and joined, at first count, more than 60 other vessels all vying for king (chinook) salmon or coho salmon.

When the depth finder registered 220 feet, the water temperature 47 degrees and with a lure depth of 60 feet, Captain Rich and Mate Jenny, started their work while Linda steered the boat. Ten rods were rigged with a lure and either a downrigger (a lead weight used to keep the lure at a prescribed depth) or a planer board (a floating device that keeps the fishing line away from the side of the boat). Depending on the location to our boat, anywhere from 150 to 300 feet of line went out per rod. After 30–40 minutes of rigging, we were ready for action.

The biggest decision was what lure to use. Should it be a “Dandy Andy” or maybe “Agent Orange?” This time, it’s the old standby “Mixed Veggies,” a fluorescent green and yellow. Most of these baits are hand-built at Wolverine Tackle. Owned by the Cartwright family for many years, the business is housed in the small town of Orchard Lake, 30 miles north of Detroit.

Fish Tip: Use the lures pictured to troll for striper, walleye, trout, salmon, steelhead and Coho in the big lake, not the river. The smaller ones are better for trout and walleye, and the big guy will bring in salmon and steelhead. Thank you Randy Dereske and the rest of the crew at Captain Chuck’s II in Ludington for sharing the lures!

What a perfect day on Lake Michigan. Three of us talking, another taking advantage of the peaceful moment to nap, when Linda suddenly called out, “Fish on!” and the well-choreographed “Fish Landing Dance” began. Immediately, Rich yanked hard on the line holding the fish, pulled the rod out of its holder and handed it to Paul, the most “venerable” of our group. Heeding Rich’s instruction to, “Keep the rod tip up,” Paul started reeling in the 200+ feet of line. Meanwhile, Linda and Jenny scrambled to make sure the fish didn’t get tangled with one of the other nine lures trolling on the side and from the back of the boat.

Fifteen minutes later, Linda barked the orders, “Reel down, reel down. Now back up slowly… slower!” Rich took the net, Paul followed orders and all were readying for the grab… except the unlucky fish. The fish traveled from side to side at the back of the boat. Rich followed him closely, with the landing net inches from the water. Then in one fast dip under the struggling fish, Rich hoisted a startled 16-pound coho on board. Linda quickly and mercifully dispatched the fish and tossed him into the large cooler on board that doubled as a seat for fishermen to rest their legs during battle. After the excitement, Rich and Jenny once again readied the lines, Linda kept the Talon on course and Paul rested an aching shoulder.

This all happened the first hour into the excursion but, as we were warned, there could be downtime. Our first fish hit at 4:30 and the next at 7:30. We watched Rich and Jenny re-rig lures and change depth and trolling speed while Linda dodged the “tin cans” (small aluminum boats) and “rag baggers” (sailboats headed for the safety of Betsie Bay). But, when dusk hit, so did the fish. We caught four big salmon, one weighing in at 25 pounds, and numerous lake trout. We lost three others, each of them big enough to snap the copper fishing line.

One of the patented Lake Michigan sunsets marked the end of our fishing and, as Rich and Jenny unrigged all 10 rods, we headed back to the harbor guided by the light at the Frankfort Pier.

It was dark when we docked, and the cooler full of fresh fish was toted up to the North Star’s fish cleaning station. Deftly wielding razor-sharp fillet knives, Linda (“I clean ‘em, but I don’t cook ‘em”) and Jenny went to work. In 20 minutes, each of us had a plastic bag filled with salmon and trout fillets.

The day ended when we “old salts” headed for the car with backs aching, shoulders sore and faces sunburned. Before getting into the car, however, we stopped long enough to concede that this day was quite an adventure and will be a yearly tradition, as long as we have a great captain and crew, a stand-up head and a full menu of “Mixed Veggies.”