Michigan has more lighthouses than any other state (at nearly 120) and the Straits of Mackinac is home to more than a dozen of these historic navigational aids. These lights remain a testament to the state’s early maritime history.

Throughout the Mackinaw City region, six of these lighthouses are open for public tours—including White Shoal and Spectacle Reef for the first time ever.

Built in 1910, this towering 124-foot red-and-white “candy cane” striped light is located about 20 miles west of the Mackinac Bridge and is only visible from the water. The White Shoal Light is the prominent design element in the “Save Our Lights” license plate for the State of Michigan; the sale of which helps fund lighthouse preservation. Michigan is the only state that supports lighthouse preservation with a program that includes annual grants from the state to local preservation groups. Tours begin July 22.

Designed and built by Colonel Orlando Metcalfe Poe and Major Godfrey Weitzel in 1874, this is the most expensive lighthouse ever built on the Great Lakes (at a cost of $406,000). It stands 11 miles east of the Straits of Mackinac at the northern end of Lake Huron. Because of the challenges of building on a shoal, including laying an underwater crib, it is said to be the “most spectacular engineering achievement” in lighthouse construction on Lake Huron. It took four years to build because weather limited work to mostly the summer season. Workers lived in a structure at the site (one of the limiting conditions). Automated in 1972 and added to the National Register of Historic Places in 2005. VIP tours are offered on a limited basis for groups of up to six people through the White Shoal Light Historical Preservation Society.

Public tours are also available throughout the summer inside these lights:

Constructed in 1892, this light was decommissioned in 1957 when the Mackinac Bridge was complete. Today, it operates as part of the Mackinac State Historic Parks and is open for tours. The Keepers’ Quarters contains three rooms restored to their 1910 appearance and a gallery exhibit on the history of the lighthouse featuring hands-on displays and original artifacts. Tours of the tower are given throughout the day, on a first come, first served basis. Tours are provided at no additional charge and are not guaranteed with admission.

Located two miles down the Lake Michigan shoreline toward Wilderness State Park, this light operated from 1869 until 1906, when it became privately owned. Emmet County purchased the light, its acreage and frontage on the lake in 2008 and operates it as a museum and historic site. It is open through mid-October, as well as the first Saturday of December during a special “Christmas at the Lighthouse” celebration.

Once home to more than 200 residents and an active fishing industry, St. Helena Island is now a natural site and home to the St. Helena Lighthouse. Built in 1872–1873, the light went into operation in September 1873. It became one of a series of lighthouses that guided vessels through the Straits of Mackinac past a dangerous shoal that extends from the island. Over time, the population left the island and the light fell into a state of disrepair until the Great Lake Lighthouse Keepers Association (GLLKA) obtained a license to restore the light station from the Coast Guard in 1986. On a few dates during the summer, excursions aboard the Ugly Anne take visitors (who must be members of GLLKA) to St. Helena Island for lunch at the lighthouse. Organized in 1983, GLLKA also calls Mackinaw City home. This membership-volunteer organization is one of the nation’s longest-lived lighthouse preservation groups.

Built in 1931, the 83-foot lighthouse is a strategic and historic landmark that marks a dangerous reef and helps guide ship traffic between Lake Huron and Lake Superior via the St. Marys River. This light is located one mile offshore in northern Lake Huron at the far eastern end of Michigan’s Upper Peninsula between DeTour Village and Drummond Island. The DeTour Reef Lighthouse Preservation Society completed a major restoration of the structure in 2004 and the following year began offering public tours and a popular overnight keeper program.

Other lighthouses in the area, viewable from the water, include:

Constructed in 1850 and first lit in 1851, this “birdcage” lighthouse is unique in style and story. When the White Shoal Light was constructed in 1910, Waugoshance became excess property and was decommissioned. During World War II, it found a new purpose—it was used for bombing practice. Today, the ruins remain a constant reminder of this light’s longstanding history. It is on the “Doomsday” list of lights beyond repair and is also rumored to be haunted by the ghost of a former keeper, John Herman. The light is NOT open to the public but is visible from the water near Wilderness State Park. 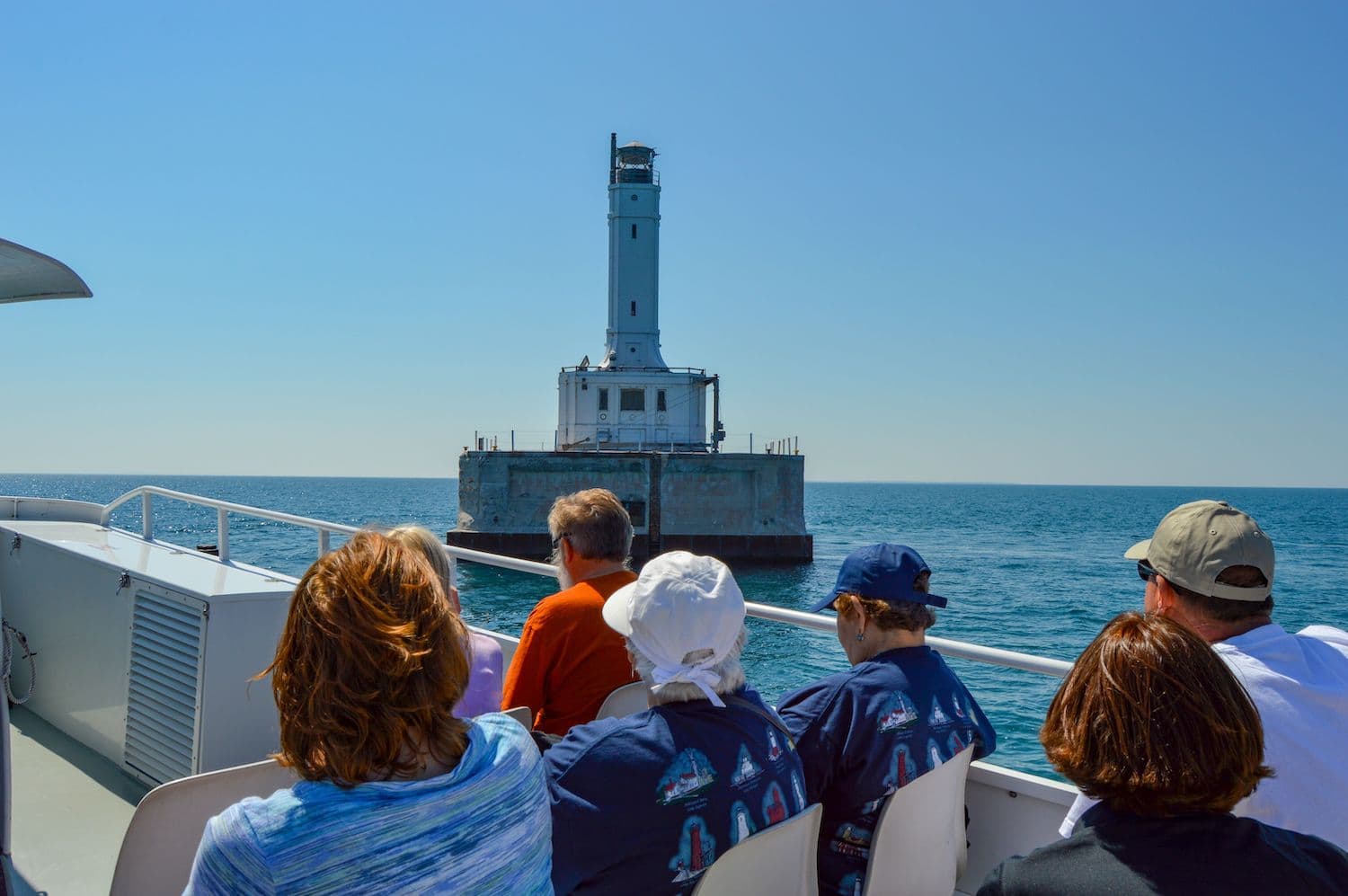 Gray’s Reef was completed in the mid-1930s just 3.8 miles west of Waugoshance Island. Visible only from the water, this 65-foot-tall octagonal light was added to the National Register of Historic Places in 2005.

As you ferry to Mackinac Island, the red and white Round Island Lighthouse stands guard at the tip of the island. It was constructed in 1895 at a cost of $15,000 by Frank Rounds, a carpenter from Detroit who had previously worked on Mackinac Island’s Grand Hotel. The lighthouse was first lit on May 15, 1896. It was commissioned under the U.S. Lighthouse Board, which became the United States Lighthouse Service in 1910. When it was first completed, the lighthouse was brick red. This would remain so until it was painted red and white in 1924. Round Island Lighthouse Preservation Society was formed in 2009 as a non-profit organization to help aid the preservation and restoration efforts. In years past, there has been an “Open House” at the light held one day a year. However, no tours are scheduled for 2019.

As you enter the harbor into Mackinac Island, this 1948 lighthouse welcomes visitors from near and far. This was one of the last lights to be constructed on the Great Lakes, built at the same time the 1895 lighthouse was deactivated. The light was sold at auction in 2014 for $65,500. It is not open to the public but is visible from the water and the island.

Marking the north side of the South Channel of the Straits of Mackinac, between Bois Blanc Island and the mainland of the Lower Peninsula, Poe Reef sits about six miles east of Cheboygan. Completed in 1928, Poe Reef Light is part of what became a complex of 14 reef lights in Michigan waters, which was intended to help ships navigate through and around the shoals and hazards of the Great Lakes. It was also part of a series of significant offshore light construction projects undertaken in the Straits area in the late 1920s. Poe Reef, with its black and white striped daymark, is only visible from the water. This light was automated in 1974, and in 2017 it was declared excess property and set aside for sale.

Named to denote that the lake is only 14 feet deep at this point—which is a hazard to navigation, ships and mariners—this offshore beacon marks the southern side of the South Channel. First lit in 1930, this automated light is only visible from the water and is an active aid to navigation. In 2012, it was declared excess property by the U.S. Coast Guard and was auctioned off in 2017, along with nearby Poe Reef Lighthouse.

Sitting on a 65-foot square concrete-filled crib, this light was constructed in northern Lake Huron 4.3 miles south of Cadogan Point in Clark Township in 1927. The lighthouse itself is a 25-foot square, white, three-story structure made of a skeletal steel frame covered with reinforced concrete and iron and sheathed with steel. The lighthouse is centered on the crib. The first floor of the lighthouse was designed as an engine room, the second floor as an office, kitchen and living area, while the third floor contained sleeping rooms. It was listed on the National Register of Historic Places in 2005. It is only visible from the water.

When visiting the marina in St. Ignace, also be on the lookout for this active light:

This 52-foot-tall beacon started life in 1998 as a travel icon at the Michigan Welcome Center in Monroe. In 2004, the City of St. Ignace became the lucky recipient, and the structure was trucked north in five pieces. Two years later, a crane reassembled the tower on its new site and it was lit on August 20, 2006. Wawatam Lighthouse takes its name from the late railroad ferry Chief Wawatam, which used this same dock from 1911 through the mid-1980s. When you visit the lighthouse, you will pass right by the Chief’s old lift gate.

Makes plans for an overnight stay in Mackinaw City at MackinawCity.com/stay, then map out your historic tour of the Straits Area lighthouses. Press release provided by the Mackinaw Area Visitors Bureau.

Explore the Straits of Mackinac