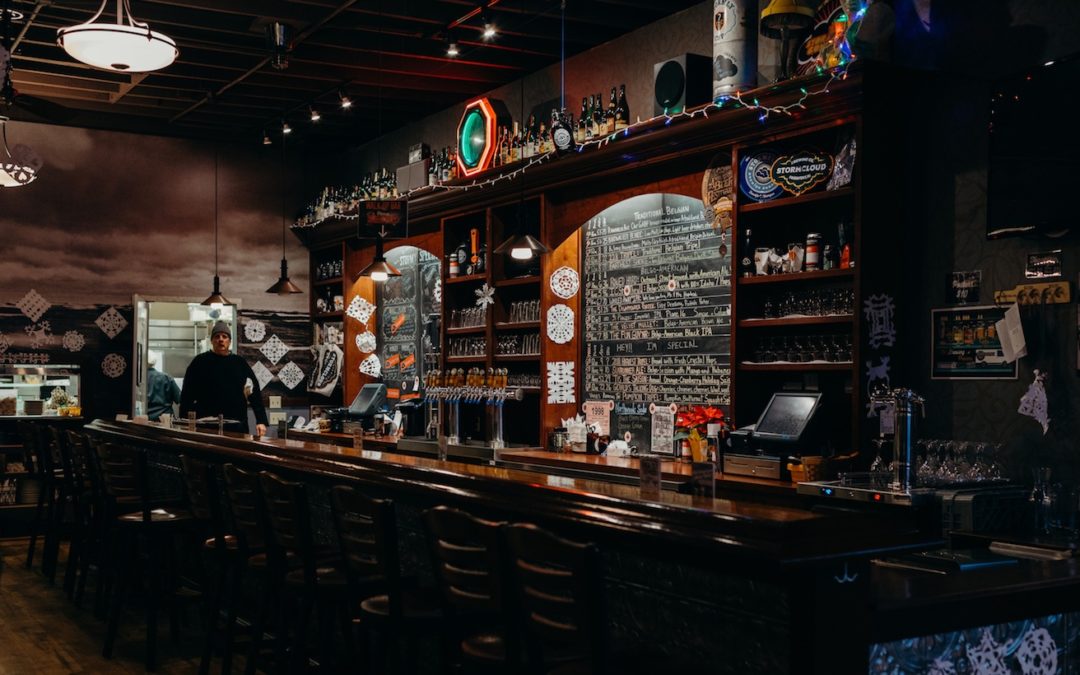 Just blocks from Lake Michigan, in Frankfort, something special is on tap at Stormcloud Brewing Company.

Featured in the March 2019 issue of Traverse Magazine. Get your copy.

I worked the first shift the day the pub opened—merely one of many employees fortunate to be part of the Stormcloud team since the now legendary brewery opened in the coastal town of Frankfort in June 2013. I worked alongside an outstanding staff and Stormcloud co-founders Rick Schmitt and Brian Confer that summer, doing everything from cleaning bathrooms and bussing tables to taking orders and pouring pints. I learned a lot from both Rick and Brian’s approach to leadership, business ownership and creativity.

Since its opening, Stormcloud Brewing Company has become a staple on Frankfort’s Main Street; a watering hole and gathering place serving up Belgian-inspired ales. 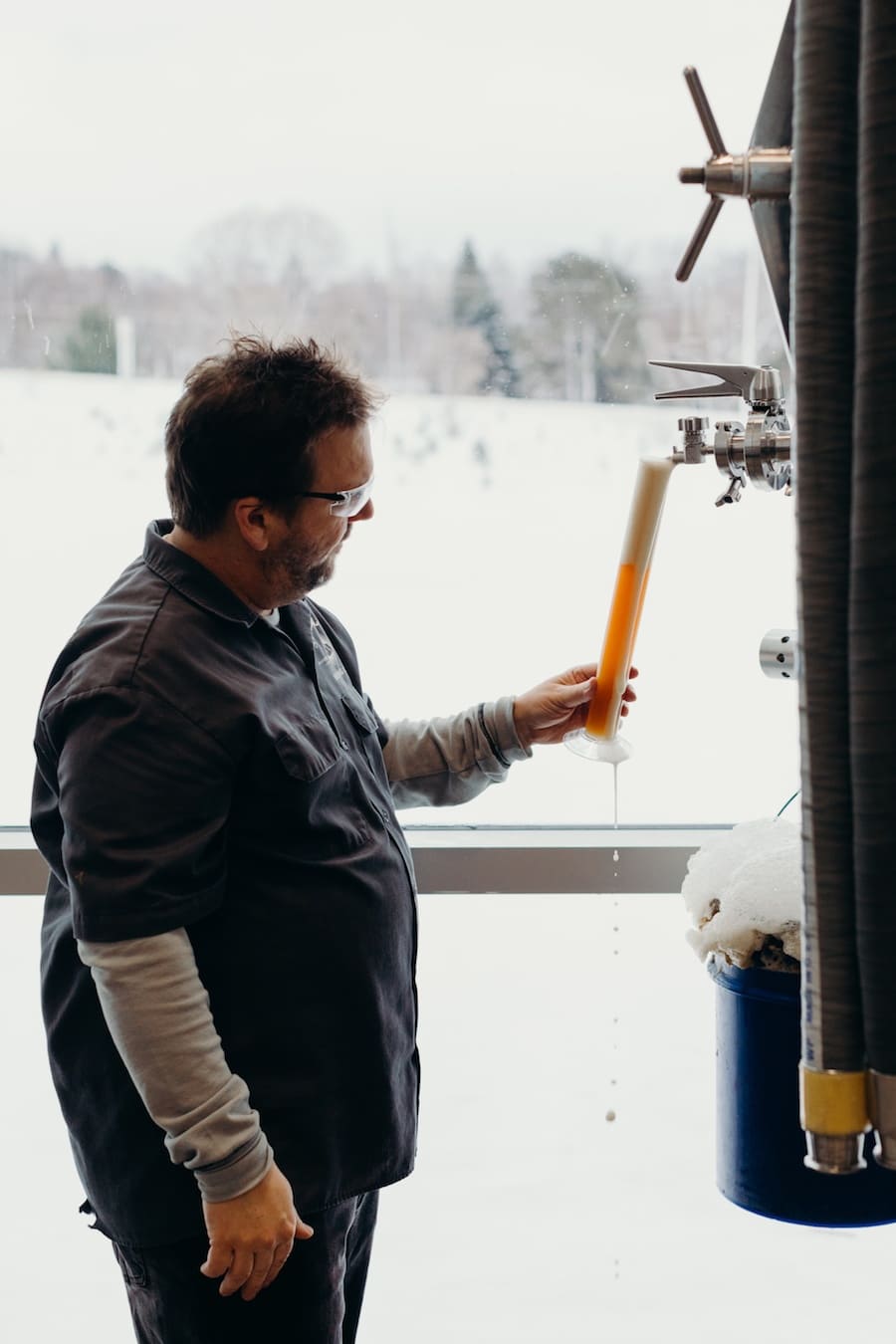 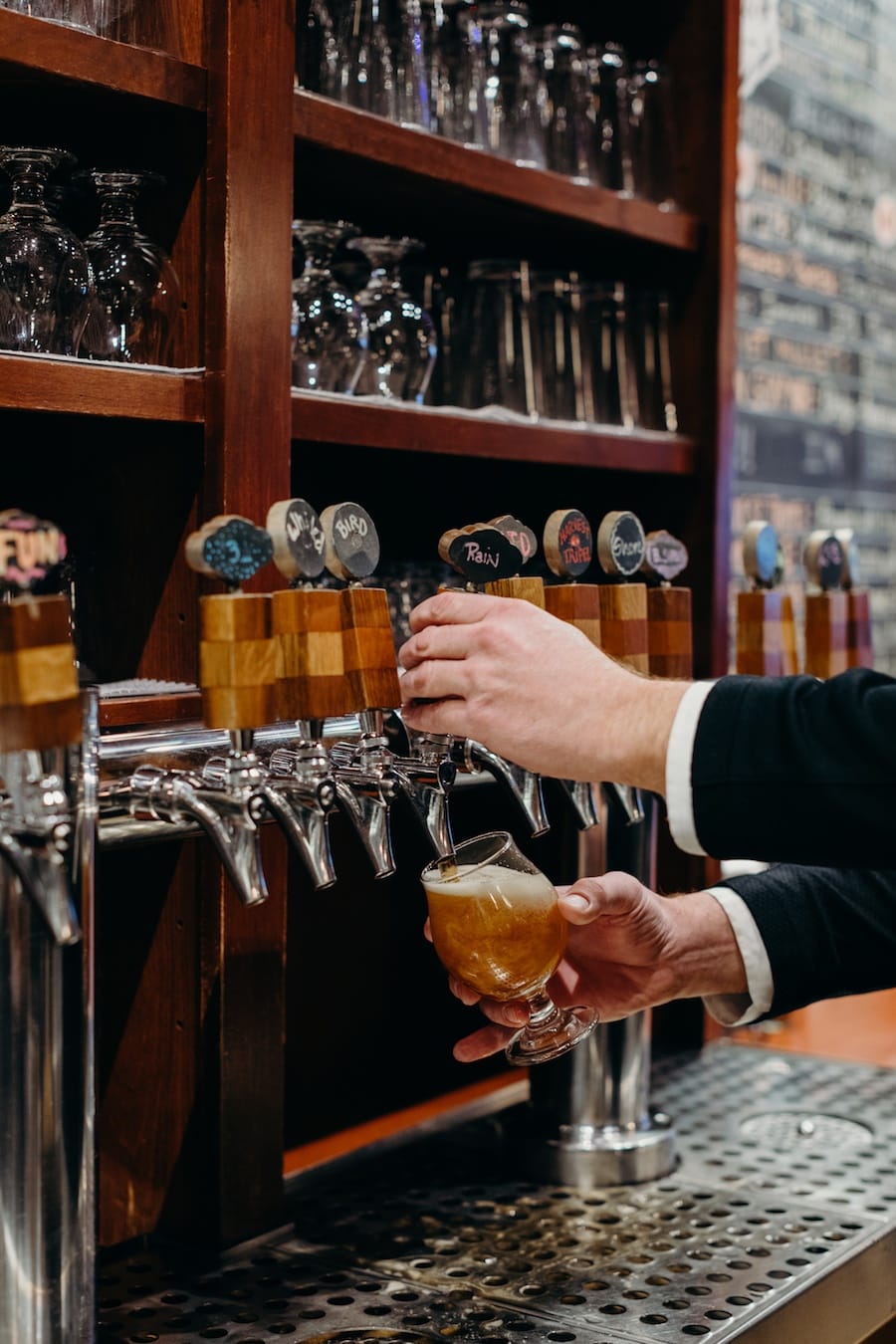 The brewery feels like it’s always been there, a part of the story of Northern Michigan. I rang in 2015 with my dad, mom and sister at Stormcloud, sharing pizzas, drinking beers—well, wine for my dad—and playing Euchre. Stormcloud was my last stop before I moved to Argentina. Every time I’m home, Stormcloud is one of my first and favorite stops in Frankfort. In this regard, I know I’m not alone.

Cultivating that feeling of belonging, year-round, even played a role in how the brewery got its name.

As Rick tells it: “When Brian talked about the name of Stormcloud, it was important to him that there was this winter message.”

“I just wanted to name it something that wasn’t all about summer,” Brian explains, “Something that would have a life and a depth of meaning to the people who live here year-round.”

So when Rick and Brian created their brewing company, a commitment to community—as well as staff, sustainable growth and top-flight Belgian-inspired beers—was non-negotiable. Today, regardless of season, the pub has become a gathering place for locals and visitors to share stories, sorrows, successes. Each season carries its own communal feeling. 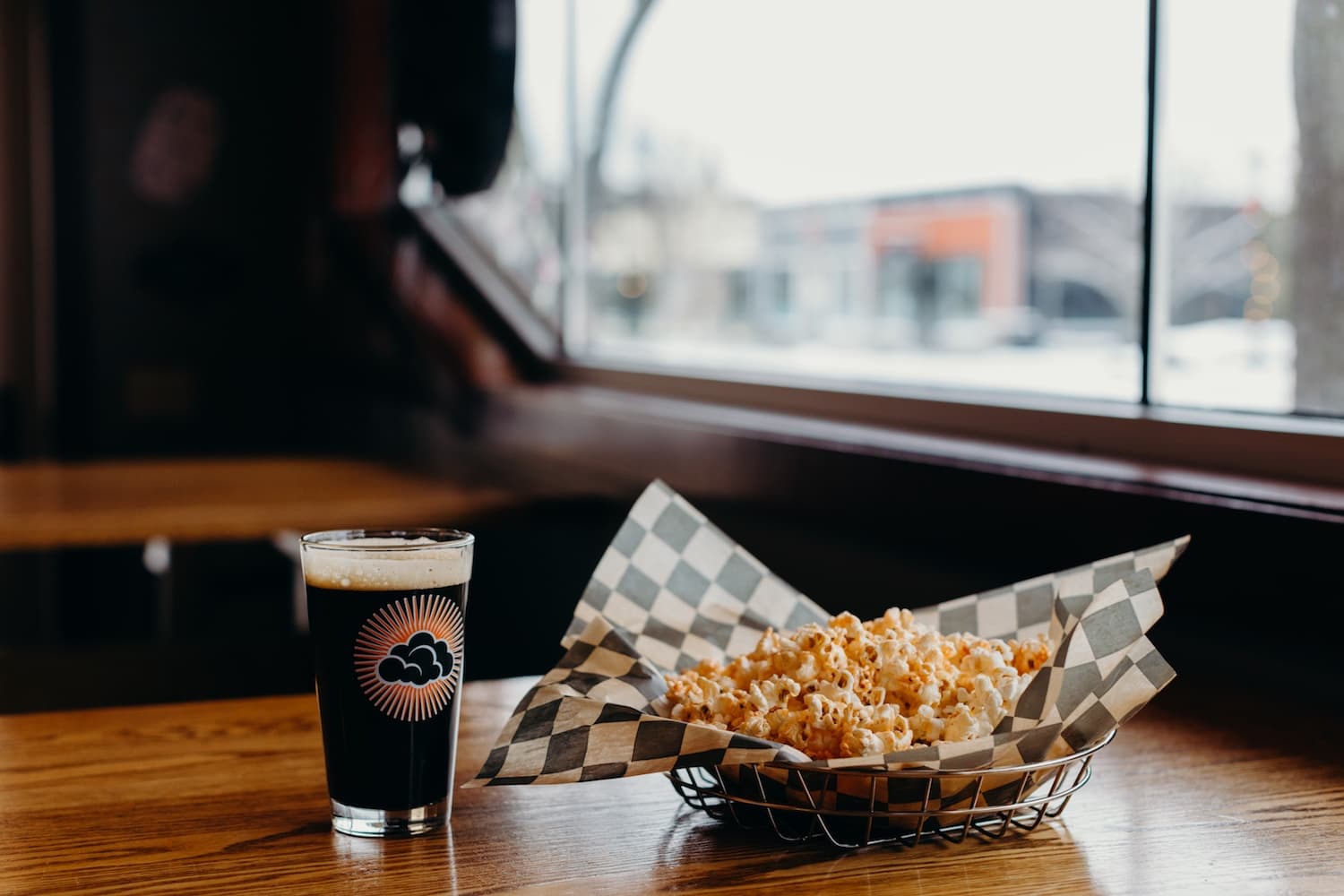 “Breweries have hundreds of years of tradition of being the place where people gather,” Rick says. “Revolutions were hatched in breweries. We’re proud and humbled to be part of that tradition and understand that we have a responsibility to carry that on.

“We hoped the pub would become a place where people would gather and treat it as their own, and that’s happened. But you don’t get that sense in the peak of the summer. Those who live year-round will say they miss that when it comes time for the summer season. There’s a group of people that call it their ‘clubhouse.’ Another group calls it their ‘treehouse.’” 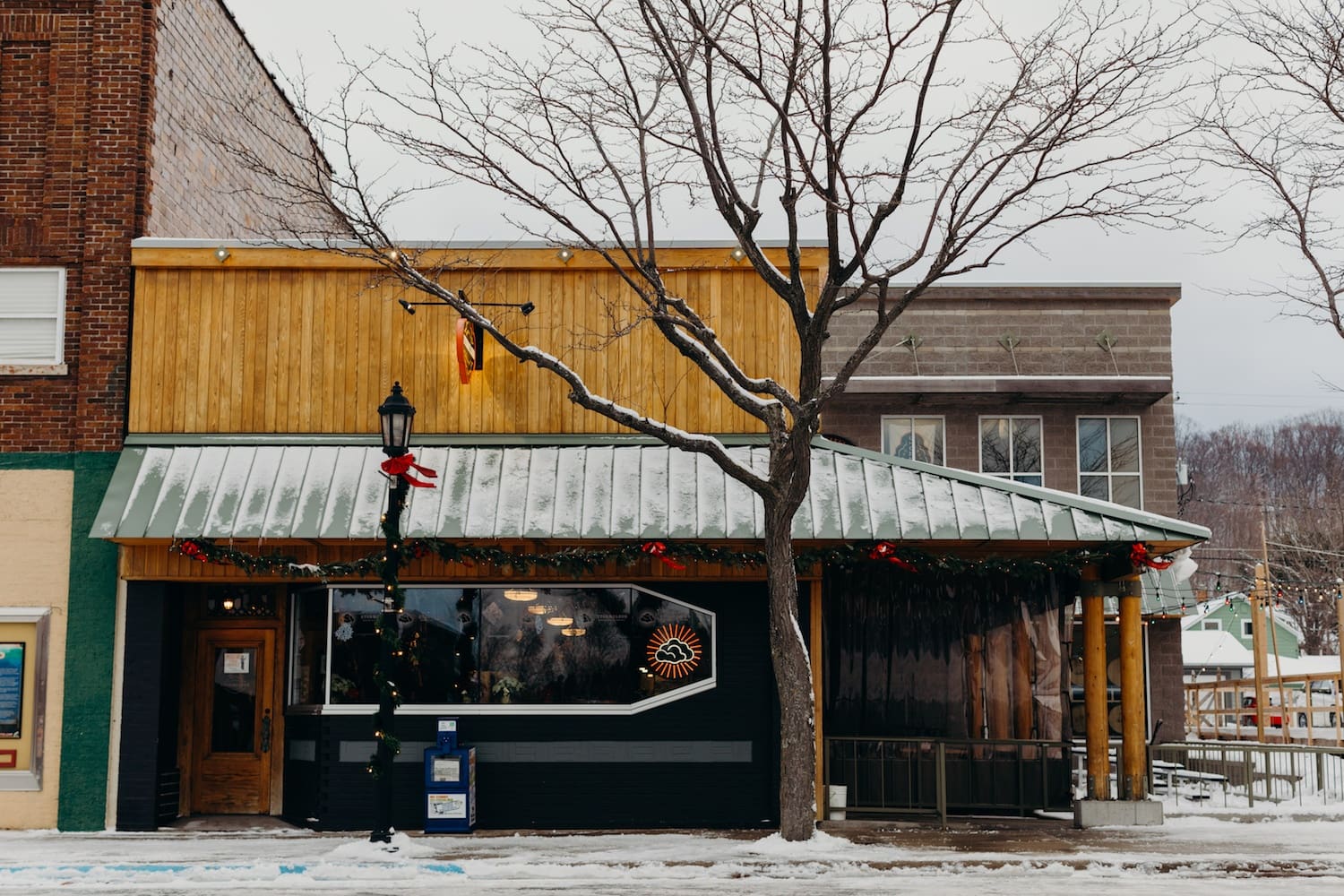 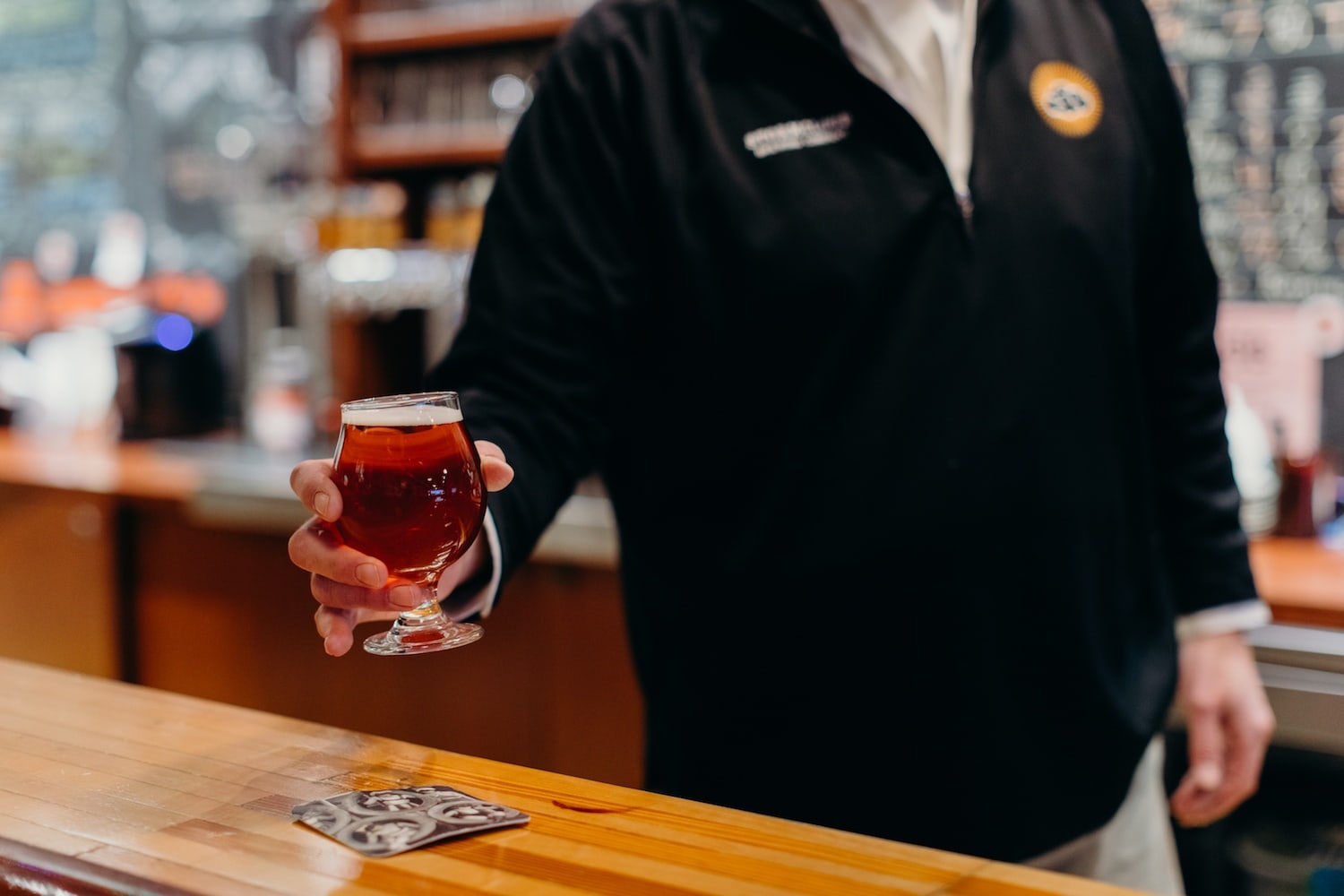 Indeed, summer is hopping at Stormcloud Brewing Company. People make pilgrimages to sip (at the pub, located two blocks from Lake Michigan). Or sip and see (Stormcloud recently expanded its footprint in Frankfort with the opening of a 12,759-square-foot production facility and tasting room, a mile east of its Main Street pub). In the summer, the pub hosts live music, open mic nights, and Wednesday evening bike rides. But the shoulder-season months bring a more intimate feel and their own series of events: Frankfort Beer Week. Trivia. Game nights. Curling. An amateur talent contest. A film and beer series. A writing contest. And yes, even an adult spelling bee.

In addition to these events, Rick and Brian say Stormcloud strives to play an active role in making the community a better place.

“When you’re a relatively small community, the results of your efforts are tangible. You really can see that you’re making a difference,” Rick says. “That’s one of the fun things about living in the size of community that we have here. If you want to have a beach cleanup and you do it, you can see the results. You know the people that are being impacted by that.”

Throughout the year, the brewery hosts fundraisers in the pub as part of its Stormcloud Builds Community program. During a two-hour time period, Stormcloud directs 50 percent of total sales to local community initiatives and organizations, including Benzie Area Christian Neighbors, Friends of the Betsie Valley Trail and Grow Benzie, among others.

Stormcloud also gets employees and customers on the volunteer train by donating their time and talents.

Rick says, “With Frankfort Beer Week, part of the proceeds from our beer dinner go to fight hunger in Benzie County. Those proceeds go to the Meals on Wheels program, and then we have staff who volunteer to deliver the food, which is often an eye-opening experience.”

As the brewing company’s customer base has grown, so has the number and the camaraderie of the employees. “Our community has grown so much,” Rick says. “So, our employee community has evolved too and taken on an additional direction. We’re in two different buildings now. Last week [in July 2018], we issued 84 paychecks. The summer we first opened, I think there were 28.” 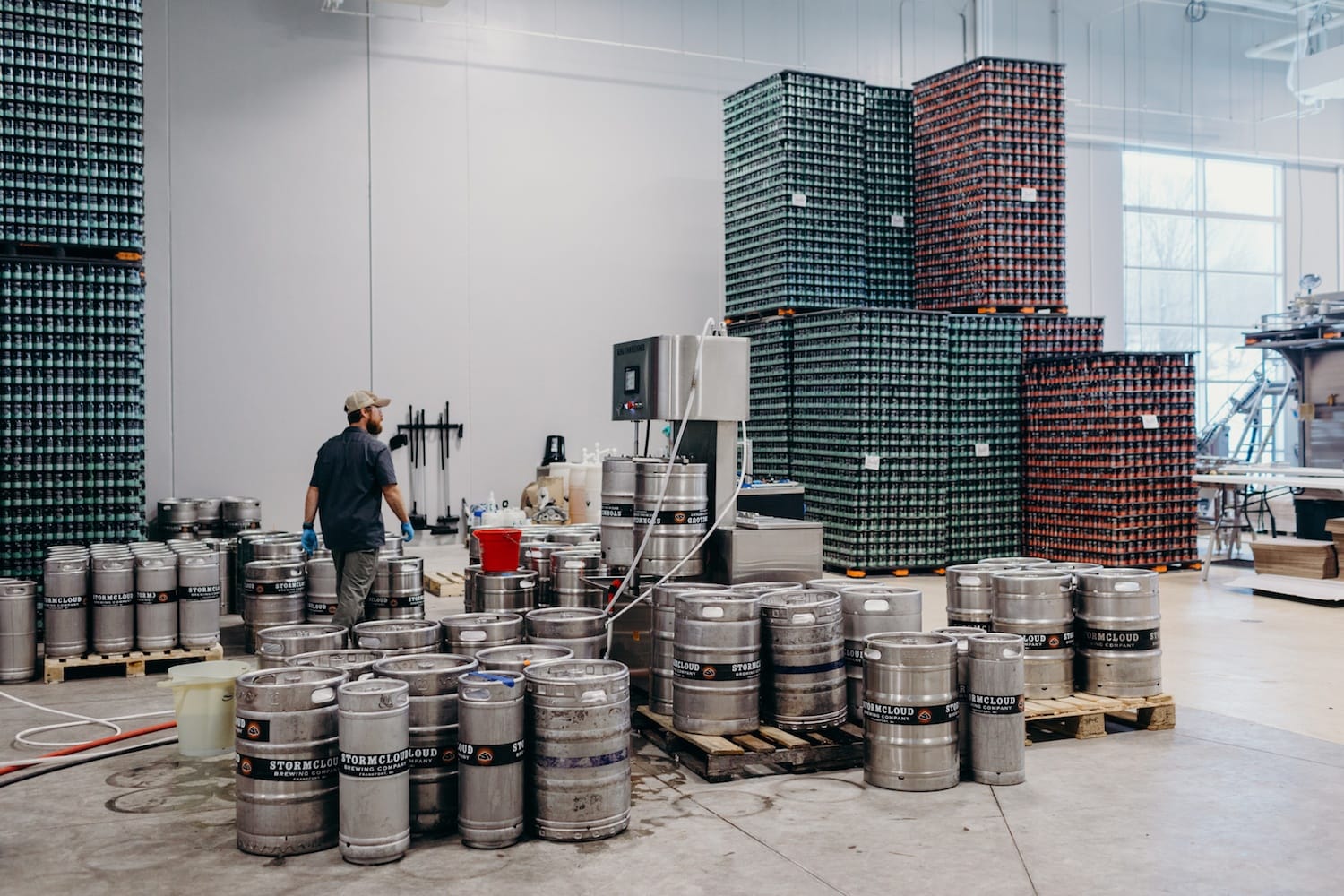 Stormcloud continues to foster that employee community. One night in August, the pub closes early to have a party for the employees, as many return to school at the end of the summer. The Tuesday after Labor Day, the pub is closed all day—even though it’s still busy in Northern Michigan—to give the entire team a break. During the winter, Stormcloud closes for a day. The owners and their spouses invite all employees and their families to come to the pub, where they cook and serve dinner for them.

Rick and Brian say they’re pleasantly surprised by the staff they’ve worked with over the years and how many, upon returning to Frankfort, have been excited to return to Stormcloud and see what’s new.

“I guess that’s just an affirmation that we’re hopefully headed in the right direction and treating people with respect,” Rick says, “That we’re attracting a certain type of employee and becoming the workplace of choice.”

From the owners to the employees to the customers and more, the thread of community is alive and well and strong and warm at Stormcloud Brewing Company. 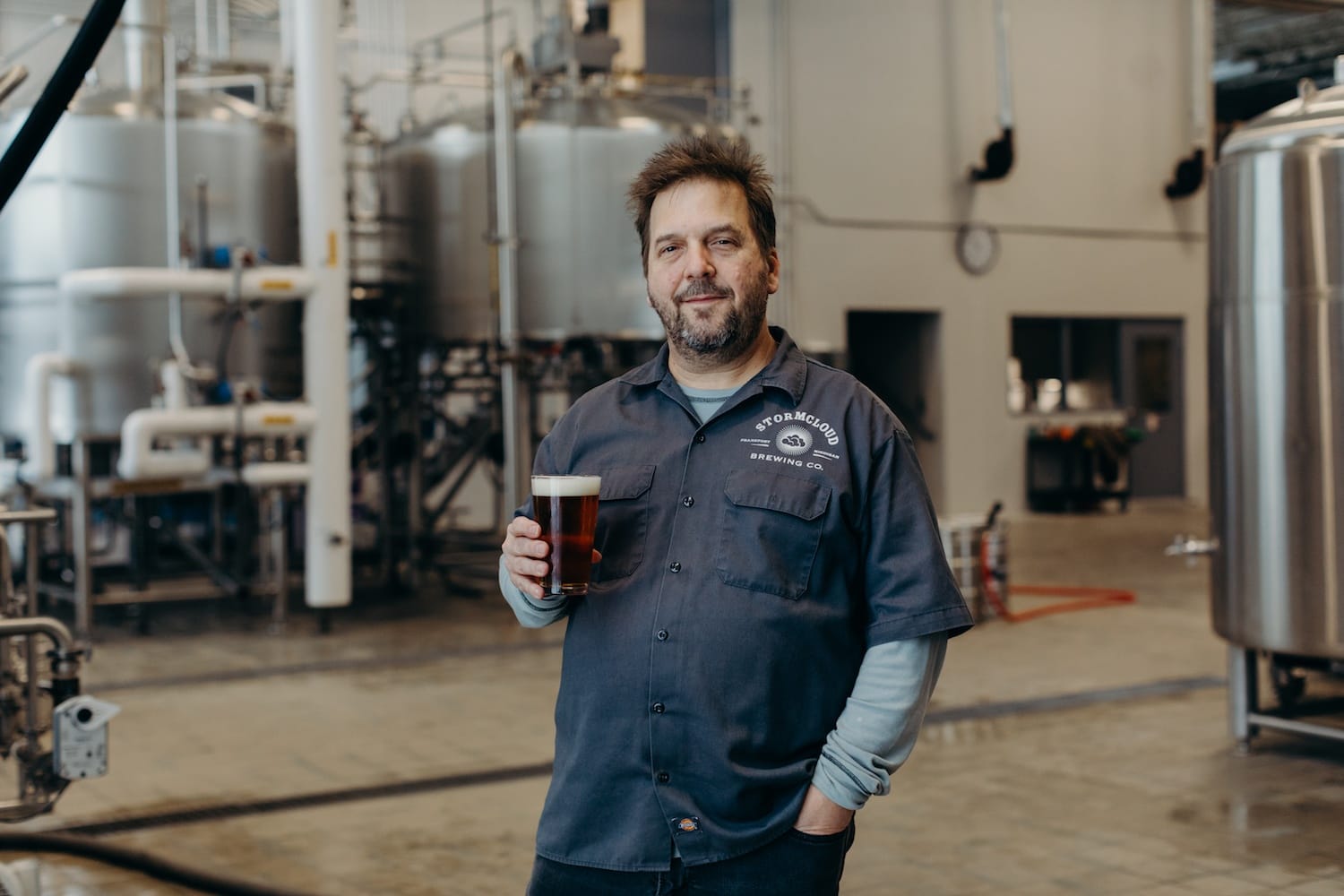 Stormcloud’s co-founder and head brewer Brian Confer began home brewing in 2010 and had been working on Rainmaker Ale for three years when the brewery opened in 2013. “It’s an easy-drinking beer—not too malty, not too hoppy,” Stormcloud co-founder Rick Schmitt says. “It has great balance and pairs well with food, which is a Belgian thing.”

It turns out that certain Stormcloud beers go well—really, really well—with specific foods. At the pub, a fun-loving food menu pairs with beer offerings that include the traditional Dubbel, Tripel and Strong Ales, along with classic beer styles such as Blondes, Pale Ales, IPAs, Porters, and Stouts. But what perfect sip to pair with what snack? Take the lead from Stormcloud Brewing Company’s head brewer, Brian Confer, and you’re golden. 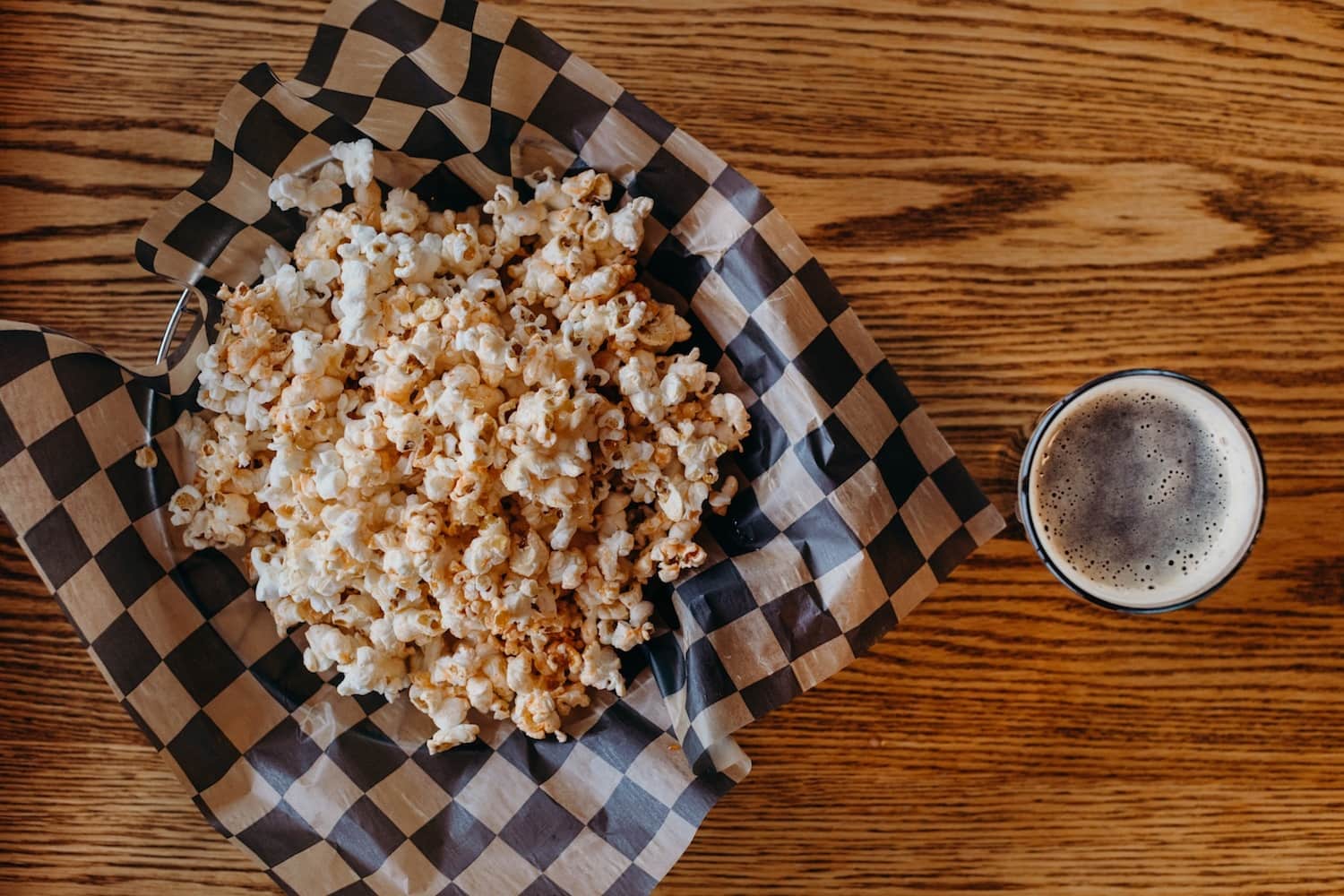 The biggest beer-pairing surprise we’ve learned is that sure, Rainmaker goes great with a burger but it goes even better with salads. Best part is, with the calories you saved by eating a salad, you can have two Rainmakers!

The Farthest Shore is a dark beer in appearance but deceptively light, with a touch of dark malt character and a touch of fruity notes. Every nuance of the beer pairs wonderfully with every part of this brisket sandwich topped with mushrooms, smoked gouda and cherry bbq sauce.

B Sirius + any component of a charcuterie board

Meats, cheeses and particularly, pickles. It’s so good with anything pickled. Siriusly.

My favorite beer pairing of all time. No lie!

AND a second pint of Fun Guv’nr. 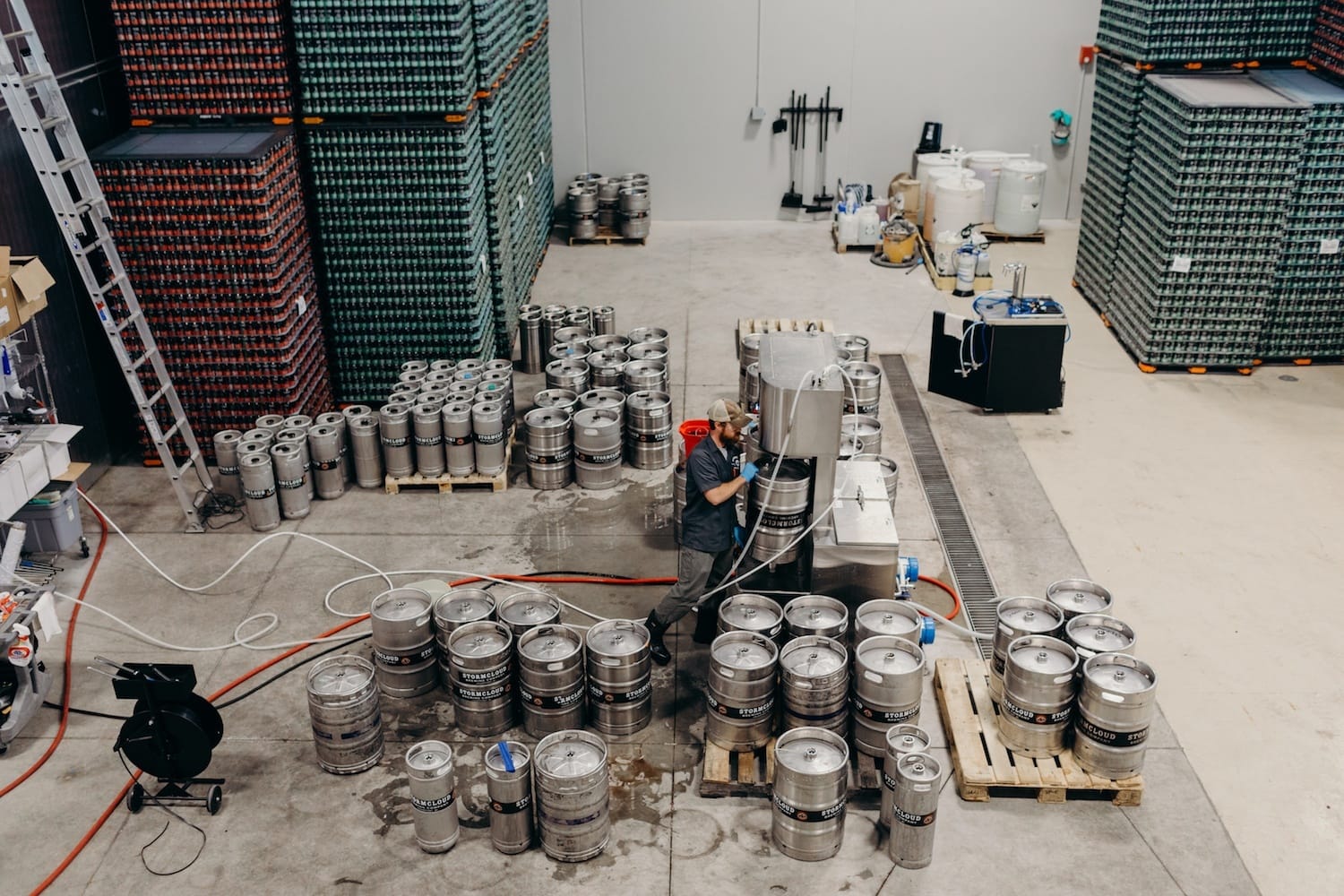 Stormcloud Brewing Company recently expanded its Michigan distribution to include 32 counties in the Lower Peninsula. Six-packs of Rainmaker Ale and Whiled Away IPA, a Belgian-style IPA, are available in 24 counties.

Emily Hopcian is an Argentina-based writer with a focus on outdoor adventure and social and environmental impact storytelling. // Photographer Jesse Green shoots commercial, wedding and lifestyle photography from Detroit and Leelanau County.