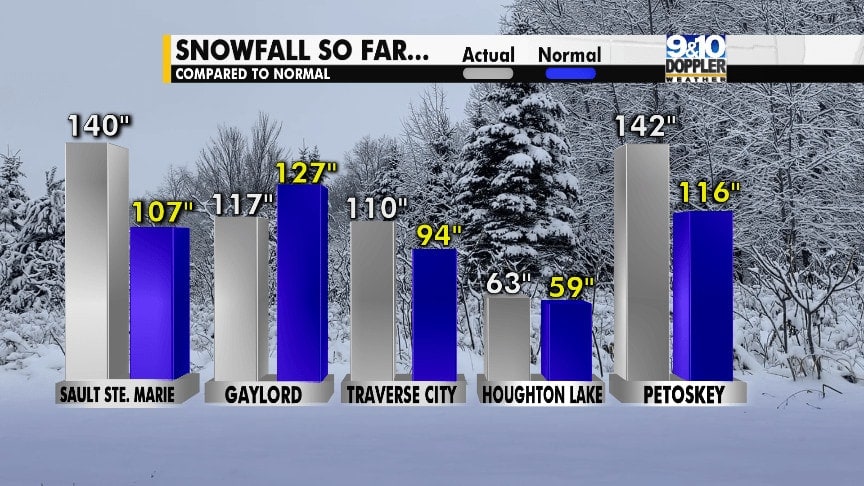 MyNorth has partnered with Tom O’Hare, chief meteorologist at 9&10 News, to bring you the latest Northern Michigan snowfall map and winter storm predictions.

So much of the region has been hoping for warmth, but it arrived quickly, creating a mess! Dealing with this will take a while even as colder, seasonable air builds in.

If you hope to get in some skiing or even snowmobiling in the coming days/weeks, you will be able to. However, the best conditions are certainly gone for the season. You’ll have to watch out for slick roads and sidewalks, as overnight lows drop below freezing once again. The overall weather pattern hasn’t changed much and doesn’t look like it will for a while.

The coldest air of the season is done but plan on more active weather for at least a few weeks. The only difference is less snow, but more rain showers and warmer temps. Spring begins March 20 at 5:58 p.m.—it looks like a typical day, with highs in the 30s and 40s with some rain and snow showers. –Tom

This started quiet with limited snow, but now it won’t end! Northern Michigan just dealt with its worst storm in more than a decade! Blizzard 2019 wasn’t fun, creating so many issues across the region.

Our active pattern is making a shift this weekend, so the big storm will take a break for a while. BUT, the end result is a stretch of Arctic air once again, just not as cold as January.

Normal highs this time of year are in the mid-30s. Plan on highs in the teens Sunday through Tuesday with lake effect snow. Seasonal snowfall is near or above normal for everyone, except Gaylord. That’s hard to believe, but it’s 11 inches below where it should be. –Tom

Northern Michigan, are you tired of the snow! Well, a break is coming this weekend and early next week.  For the last two weeks, the snow has been adding up along with melting snow, freezing rain, sleet and even a little rain. We’ve had it all! Snow lovers have finally been able to get out with no worries about bitter cold temps. After a very slow start, the snowfall to-date is making a good comeback. It’s hard to believe the Soo, Houghton Lake and Petoskey are all above normal, and Traverse City is just 3 inches away. We’ll see what happens the next few weeks, but there’s no question the general pattern of active weather hasn’t broken down yet. We are just in a little break before the skies get active once again. So get out and enjoy the snow! –Tom

The brutal cold will take a break this weekend as the jet stream pushes back North. Certainly a welcome break considering how cold and snowy it has been. Our recent snowstorm and lake effect snow really popped up the seasonal snowfall. The one spot still well below normal is Gaylord which is about 18” below average. A burst of warmth moves in this weekend with temps warming into the 30s and 40s. That brings rain showers to parts of the region Sunday and Monday, so watch for very icy roads and walks even with warmer temps! Going from well below zero to highs in the 40s is an incredible change, but the warmth won’t last. Cold air is back in the forecast later in the week, but it’s nothing like we just experienced. Plan on highs in the 20s with lows in the teens. –Tom

Burrrrr… That’s the word for the weekend! Arctic air is headed in delivering the coldest air of the season. The jet stream is taking a dive south allowing this cold air to flow in. The Central Midwest to the East Coast will deal with a major winter storm. Here at home, it’s more cold than anything else. If you want snow, some will be around with a few inches possible Saturday south of M-72 as well as some lake effect snow due to the bitter cold. This could lead to a few more inches in spots, but nothing major.

The overall pattern will NOT stay this way as it looks like the jet stream moves back North next week setting the stage for an active week with around normal temperatures. Right now, Tuesday could be a very snowy day! –Tom

Well, it looks like winter has finally arrived and boy did it ever! Rain, snow, icy mix and more snow! Some of you have picked up more than a foot of powder in just the last five days. So, the atmosphere did change into winter mode but not completely. This means the next few days are perfect to get out and enjoy winter activities. Temps are set to warm above freezing helping clear the roads but watch out at night as the temps drop below 32 degrees. Anything not treated with salt or sand could certainly be slick.

Even with the recent snow, all areas remain below average for snowfall to date. A few spots are close, like the Soo or Petoskey, but the region needs a lot more to help out winter sports. That being said I am watching a storm set to arrive on Monday. It looks a lot like the New Year’s Eve storm but with less precipitation. Right now, the track shows a mess with rain, snow, or wintery mix then a late change over to all snow early Tuesday. Regardless, the region is in this active pattern so don’t be surprised if you see another storm by the end of next week. –Tom 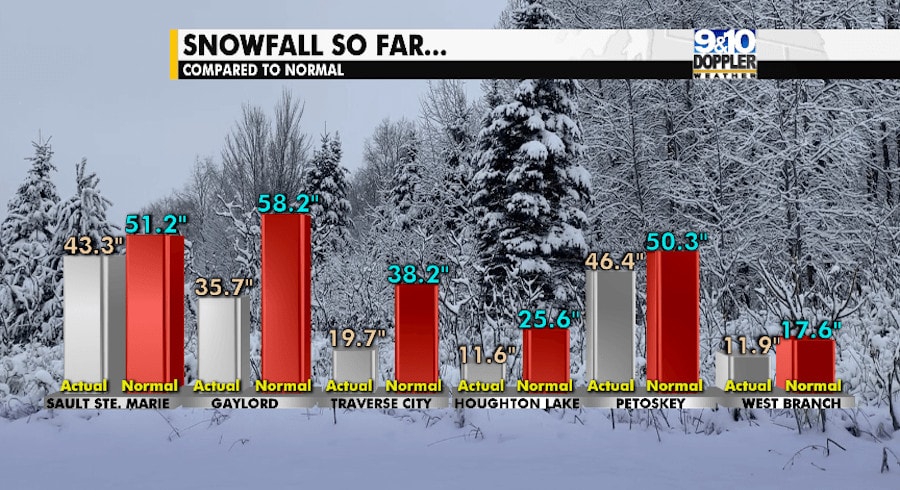 Christmas is quickly approaching and the warmth is still here, but it won’t last through the weekend. A system coming through will make for a small change with some cold air coming in the next few days. I’m not talking arctic air but cold enough to have some lake effect snow—and the region needs snow!

Most of the area is below average and what is coming doesn’t look significant. Gaylord, Traverse City and Houghton are about a foot or more below average. Only Sault Ste. Marie, West Branch and Petoskey are about average. So the good news is snow is forecast late Sunday and Monday and should make the region seasonable going into Christmas. The bad news is it won’t help those hoping to go snowmobiling.

Looking farther down the road around December 27–28, the latest models show a shift in the atmosphere bringing a storm to the region with cold air behind it. Snow lovers can only hope! –Tom

This week’s weather has certainly been changeable with sunshine giving way to clouds, snow and some freezing drizzle. The overall flow of the atmosphere has changed a little and that’s keeping the arctic air trapped to the far north. Temps are set to rise this weekend with highs in the 40s and pleasant sunshine. That’s not good for those wanting to hit the trails, go snowshoeing or cross country skiing. The forecast does feature a quick burst of cold air on Monday but it won’t last. Our longer range forecast features above-average temperatures for much of the time.

Is there good news? I know it’s down the road but there are indications of a pattern shift around Christmas. The region could deal with a storm just before the 25th delivering a white Christmas. We’ll have to wait and see. –Tom

Northern Michigan’s snowy season started early and has been adding up. It was great for hunters with tracking snow for much of the firearm deer season. There’s a wide range in season totals so far with lake effect being the biggest factor in the differences. Gaylord, Traverse City and Houghton Lake are around average while Petoskey and Sault Ste. Marie are both well above average.

This weekend starts off cold with a couple of snow showers, but they won’t amount to much. Skies then set to dry out as high pressure slides into the region. That means very quiet skies with sunshine developing through the weekend! Snow lovers are not a fan of this forecast as there isn’t much of anything large expected for a while. Looks like the best place to go for notable snow is in the U.P. and local ski resorts.

Our overall pattern hasn’t changed much the last two weeks but it’s enough to allow some seasonable air to slide back into the region. The longer-term forecast shows the chance of about one storm every six days or so. But with slightly warmer temps that means it could be rain or snow. –Tom 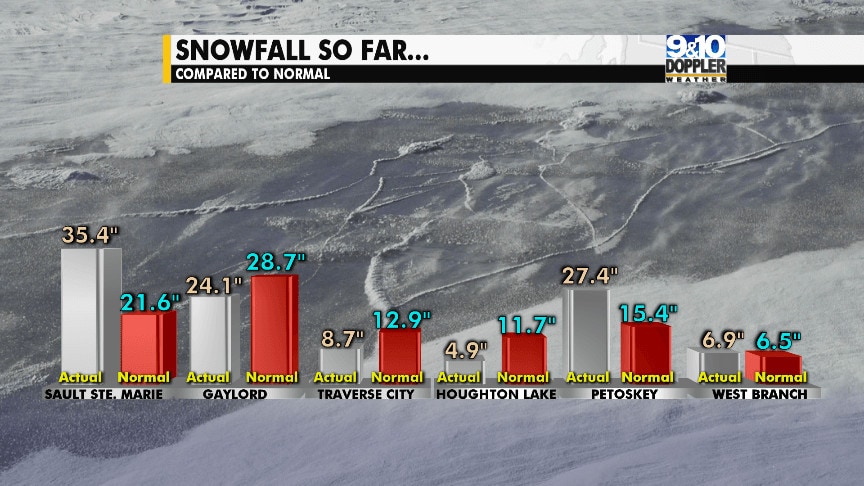