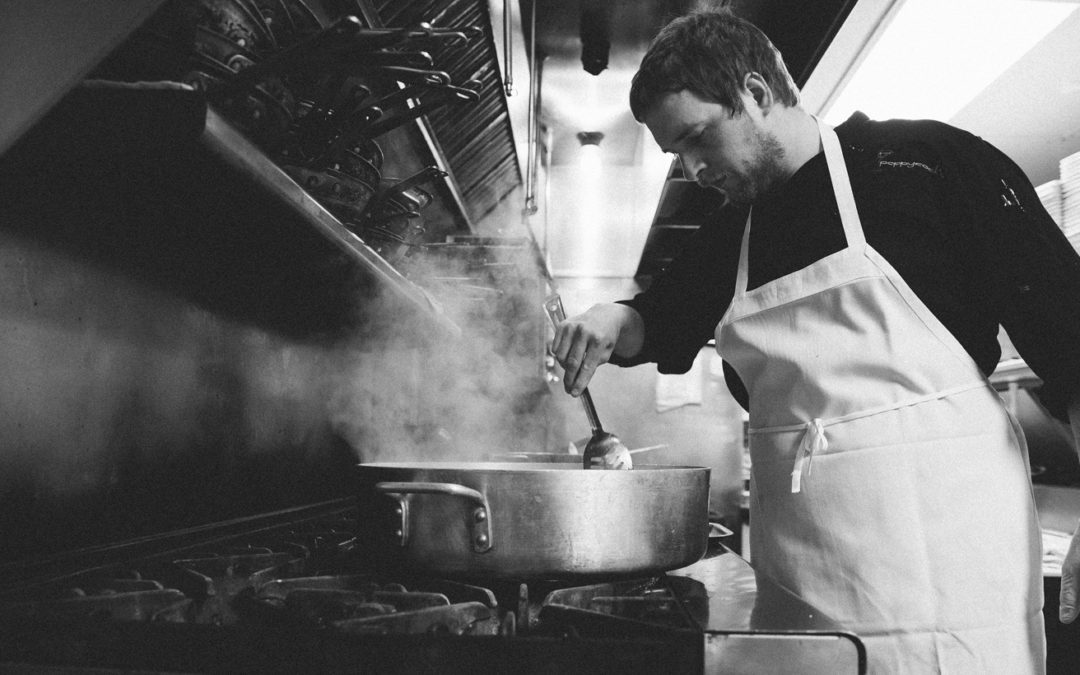 This Traverse City gathering place has been a movie parlor, a dairy bar, a diner, and, for the last 30 years, it’s been Poppycocks.

Featured in the February 2019 issue of Traverse Magazine. Get your copy.

Locals come in as steady as a heartbeat for Wednesday’s date night. It doesn’t matter who your date is, says Poppycocks co-owner Whitney Butzier Biggs. Bring your bestie, hunker down in a booth and share two entrees and a bottle of wine for $45. Date night is a miracle of winter—a perk of the people, for the people. A landlord and tenant say hello and wait side by side for a table, a guy and gal in snowcaps catch up with her former boss and his wife, laughing so hard they cry.

The Butzier family opened the doors in 1989, creating a remarkable and enduring feeling of community, anchored by the dishes and drinks that people truly crave. On that list: tomato-spinach-Swiss soup and the pita chips to dunk in tahini-rich hummus, salsa or bubbling Jarlsberg cheese. These are Poppycocks classics. But the specials are where the chefs play, much to the regulars’ delight.

Six years ago, the Butziers gave Executive Chef Chris Day the reins in their storied kitchen after loving what they saw in his debut as a 21-year-old chef prodigy at Peninsula Grill. Tonight’s upbeat, seamless service in the front of the house reflects the good vibes Chris fosters back in the kitchen.

Swing open the doors to that snug stainless steel kitchen, right now in its final pregame buzz. The daily soups await their adoring fans. The servers ladle them and tear off still-warm garlic-herb rolls from a giant baking tray on their path through the kitchen. 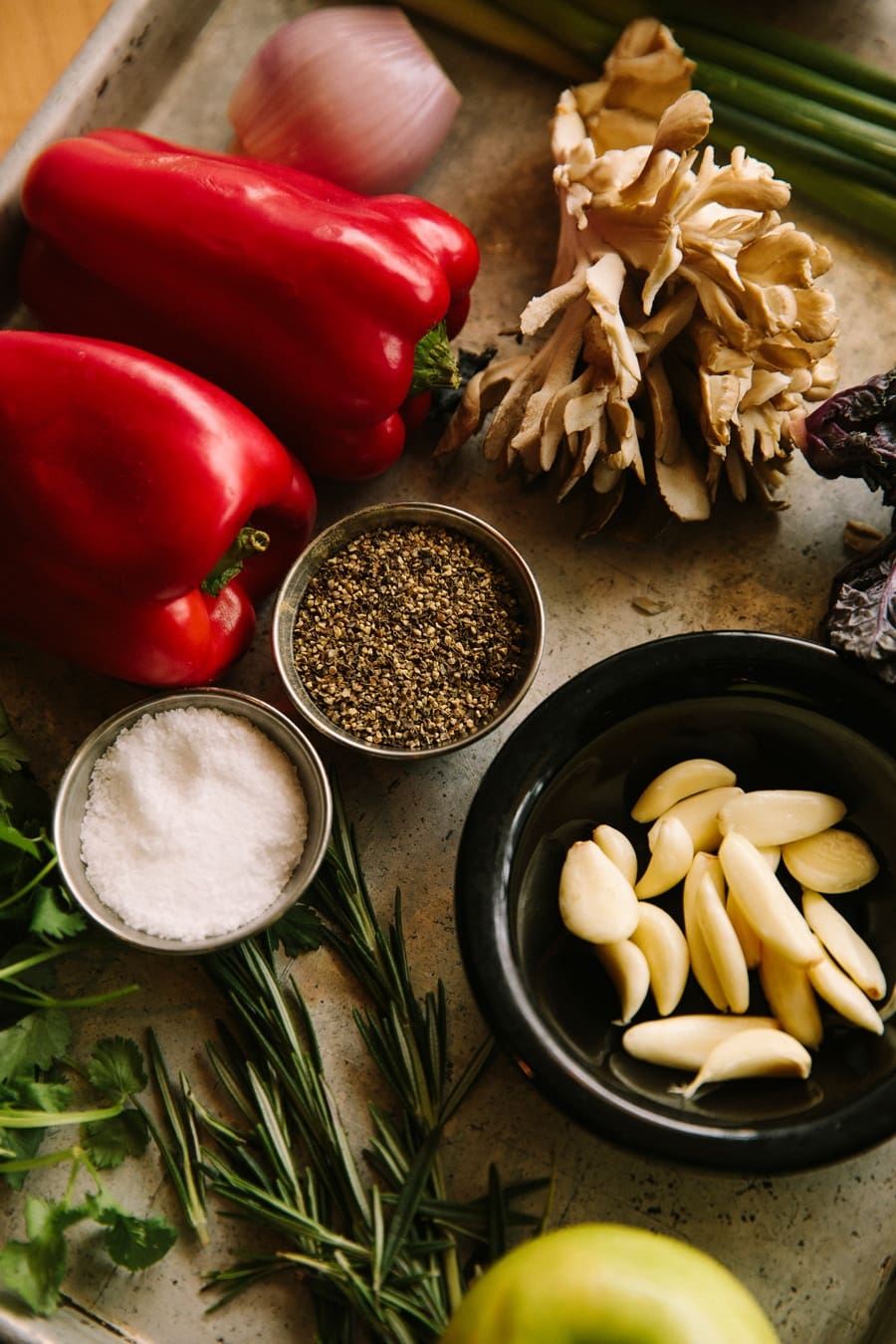 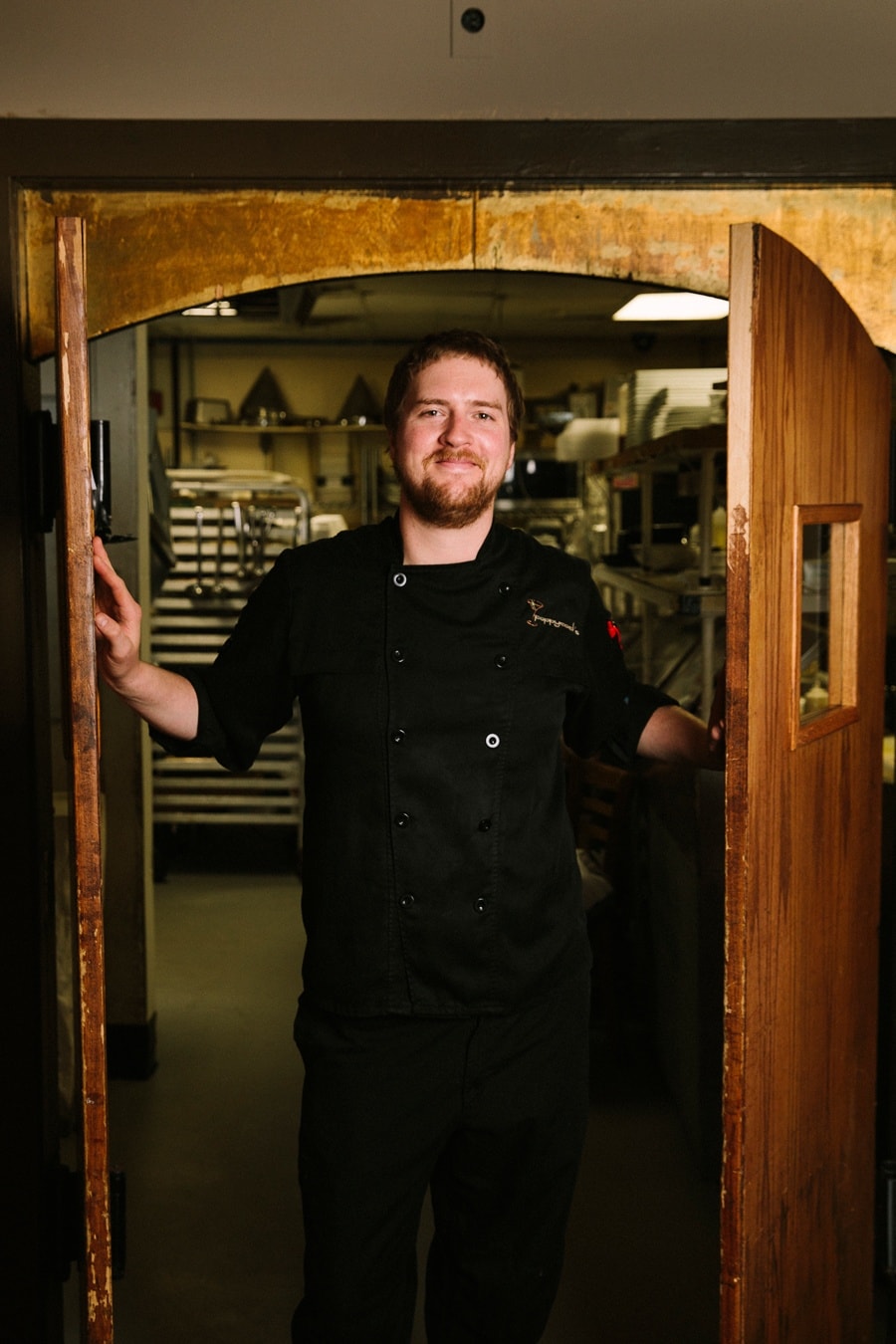 Chris Day grew up in Manistee in a family that bestowed upon him both his passion and his down-to-earthiness. His grandmother (paternal side) was Canadian, a world traveler and, says Chris, a phenomenal cook. “My dad, too—I remember as a kid having steaks with artichokes and Hollandaise at his house and being blown away.” His grandpa (maternal side) kept traditions alive with his homemade kielbasa and local venison. His grandpa, in his 90’s, just last fall helped Chris chainsaw a tree in his yard. “The commonality on both sides of the family,” he says, “is being a quality person and being good to people.”

Chris is serious but smiling at the stoves with Sous Chef Mary Dueweke. They are bantering while executing the Gold Plate special. “Grouper with pepita crust?” he asks. “With polenta?” she replies. It’s like a little dance. Chris starts whisking together from memory the perfect ratio for firm polenta, adding in cheddar and chipotle. Mary’s on sauce detail, intuiting what Chris would like. “I get what he’s talking about,” she laughs, “Or I know the right questions to ask…” 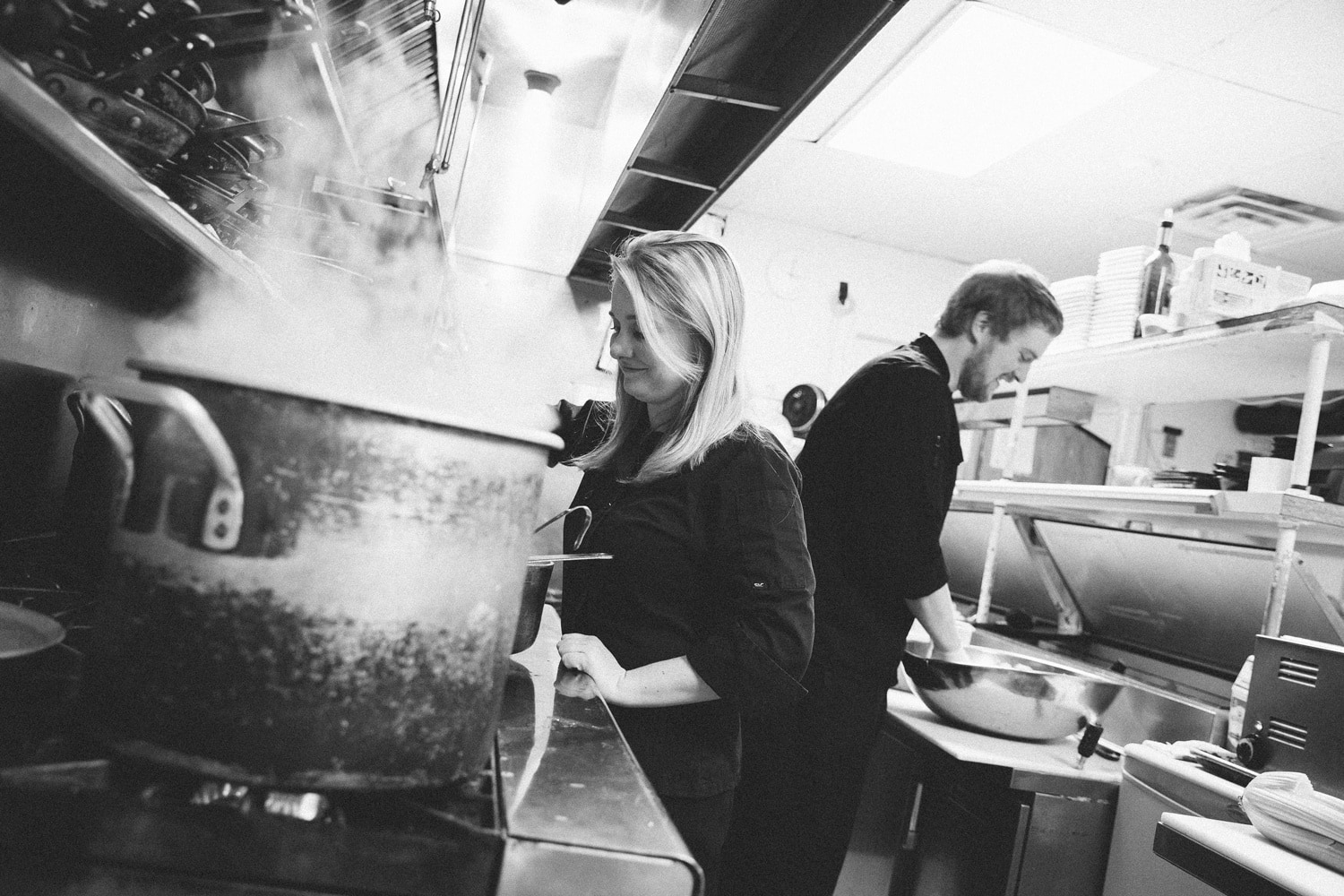 Mary is not only Chris’s wing-woman in the kitchen but also his girlfriend of three years. He hired the Great Lakes Culinary Institute grad (Chris is also an alum), giving Mary her first break. Mary, an Interlochen native, says they were both a little scared about starting to date. “I worked for him before we dated, and we established our work relationship,” she says.

“We were both super nervous,” adds Chris, “but we decided to give it a shot.”

And the specials, created daily by Chris and Mary along with their teammates—James, two Johns, Mike and Andrew—are better for it. “You spend enough time around a person, even just in the kitchen…you start to ‘get’ each other,” he says, adding: “Mary’s good at everything. She’s a Jack-of-all-trades. At work, she does the specials, she does chocolates. She can do smoked food or braised meats. But that’s just here. Outside of work she can do about a billion things: crochet, paint, snowboard, calligraphy.”

Mary laughs, “I like to say I am mediocre at a lot of hobbies!” But the bourbon mustard cream sauce she offers to Chris with a clean spoon, and the little stack of expertly hand-knit winter hats she has by the door (she’s checking to see if one would perfectly fit one of the cooks) tell a different tale. 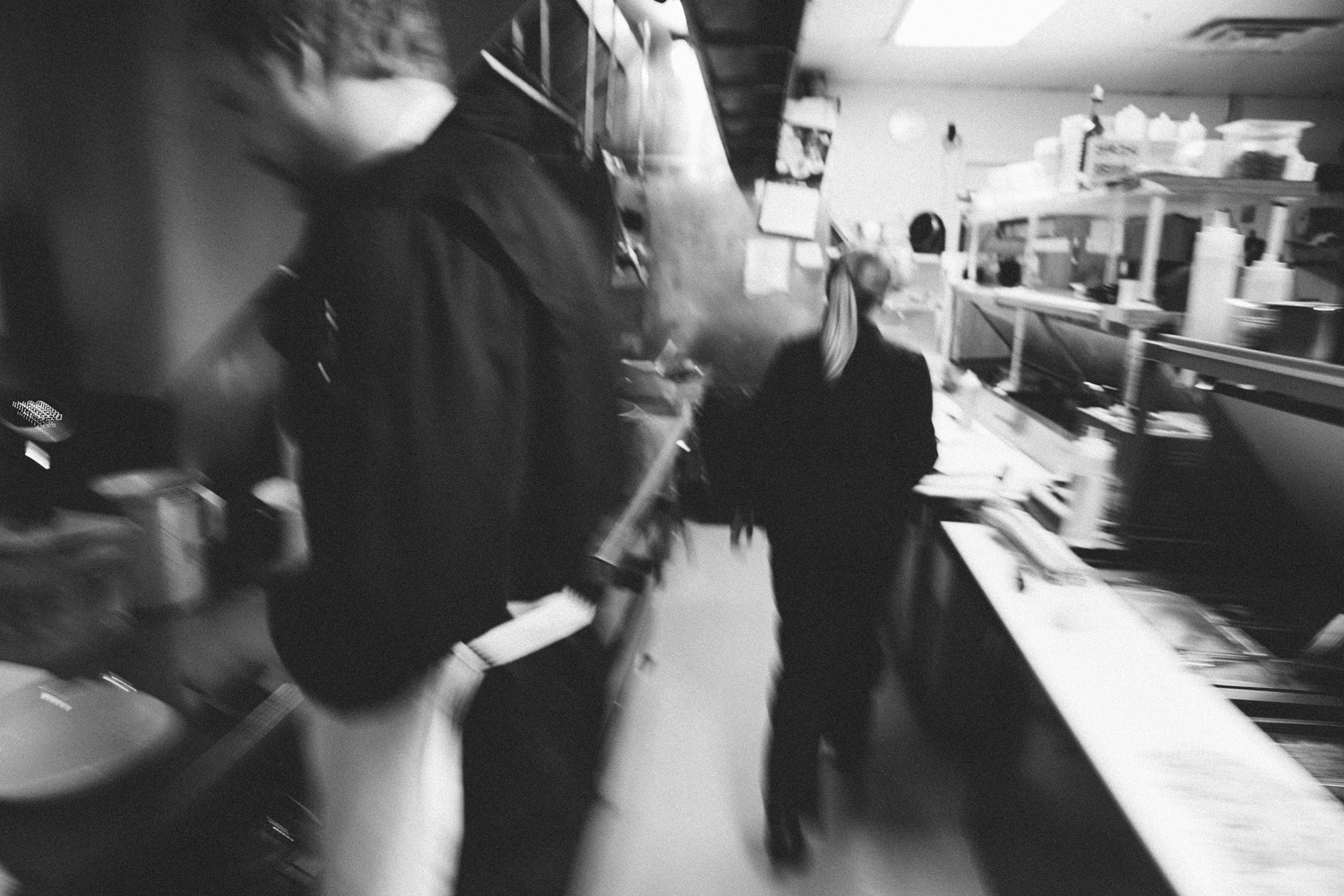 It’s not lost on Mary and Chris that it’s date night, and they are here. But they do downtime right. They bought a house together—an adorable knotty pine abode in Mayfield with a creek running through the yard. They’re hosting a Super Bowl party for Poppycocks staff. Their deep fryer will come out of temporary hiding for homemade wings.

They snowboard at Nub’s Nob, where Mary’s dad runs the ski-tuning center. And in summer, they camp. They bring steaks, to cook with morels and fiddleheads. They make rabbit stew over the fire all day. They take a drift boat out to float. “Chris is an obsessive fly fisherman,” says Mary. Chris attests: “I love the challenge and the escape, a big puzzle you are constantly trying to solve. I’m a catch-and-release fisherman, but I like that, figuratively speaking, you can come back empty-handed. You work a long time to get better at it, kind of like cooking. You put in time and effort and it’s rewarding.”

“It’s gratifying to make something together and collaborate,” says Chris. “Not every day can you be creative, and thank God I don’t have to do it alone, I have a team.” He acknowledges each member of the kitchen crew who, along with the servers, takes a single taste of the dish. It’s a winner.

Mary quickly pens it in the kitchen’s tidy logbook of specials and passes it to the outstretched hand of the server waiting to scribe it on the chalkboard. A life recorded in recipes. For Chris and Mary, one more date night in the books. Emily Tyra is editor of Traverse Magazine. [email protected] Andy Wakeman is a commercial and editorial photographer based in Traverse City. 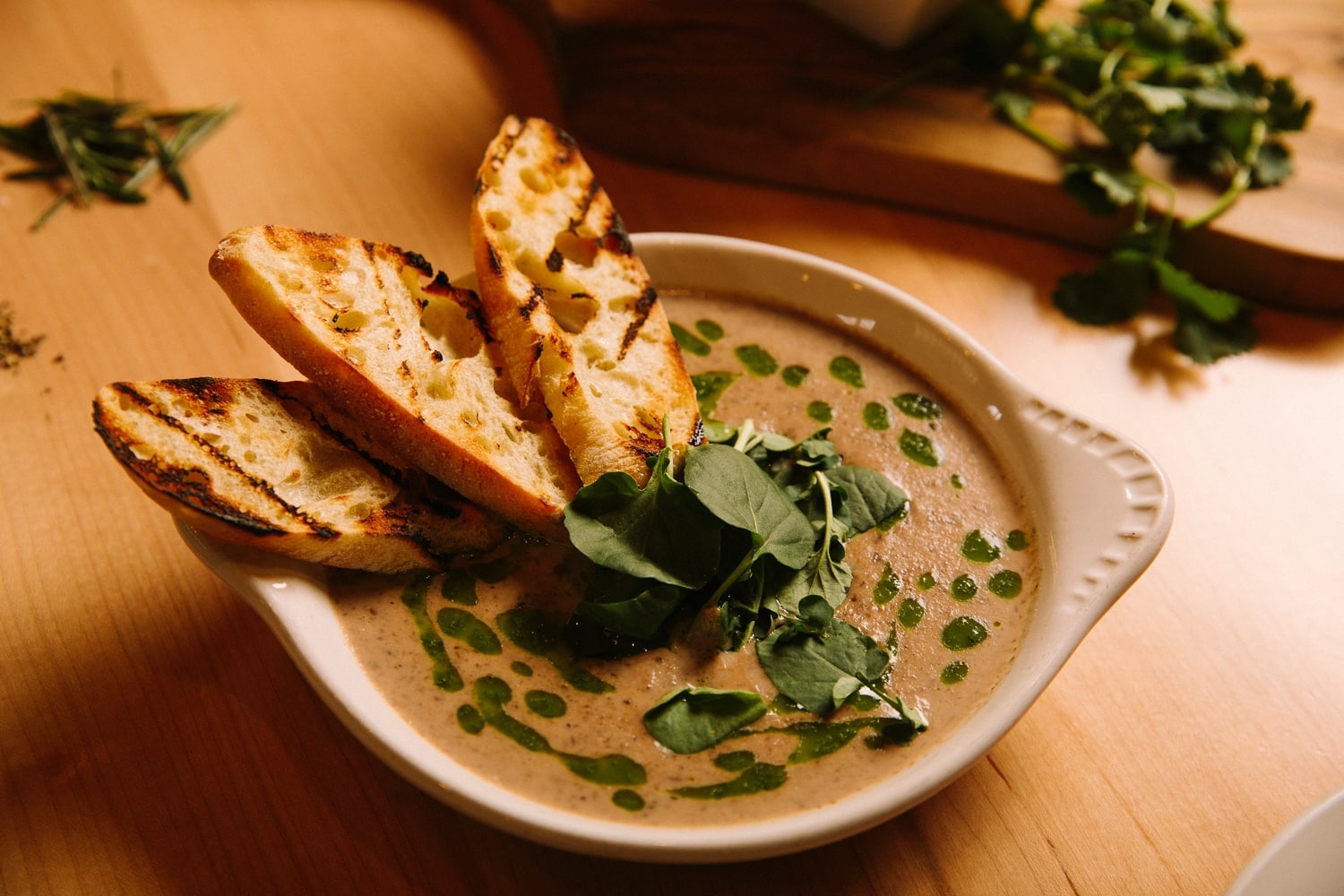 Instructions
In a small saucepan or sauté pan, melt 8 tablespoons butter and whisk in flour. Simmer for 1 minute to form a roux. Set aside.

Sauté onion, shallots and garlic with 4 tablespoons butter in a large stockpot until softened, then add mushrooms and continue to cook down. Deglaze pan with red wine. Add roux to pot and stir. Slowly whisk in mushroom stock, vegetable stock, cream and smoked butter. Bring to a boil then turn to low. Stir in herbs and cheese. Season to taste. 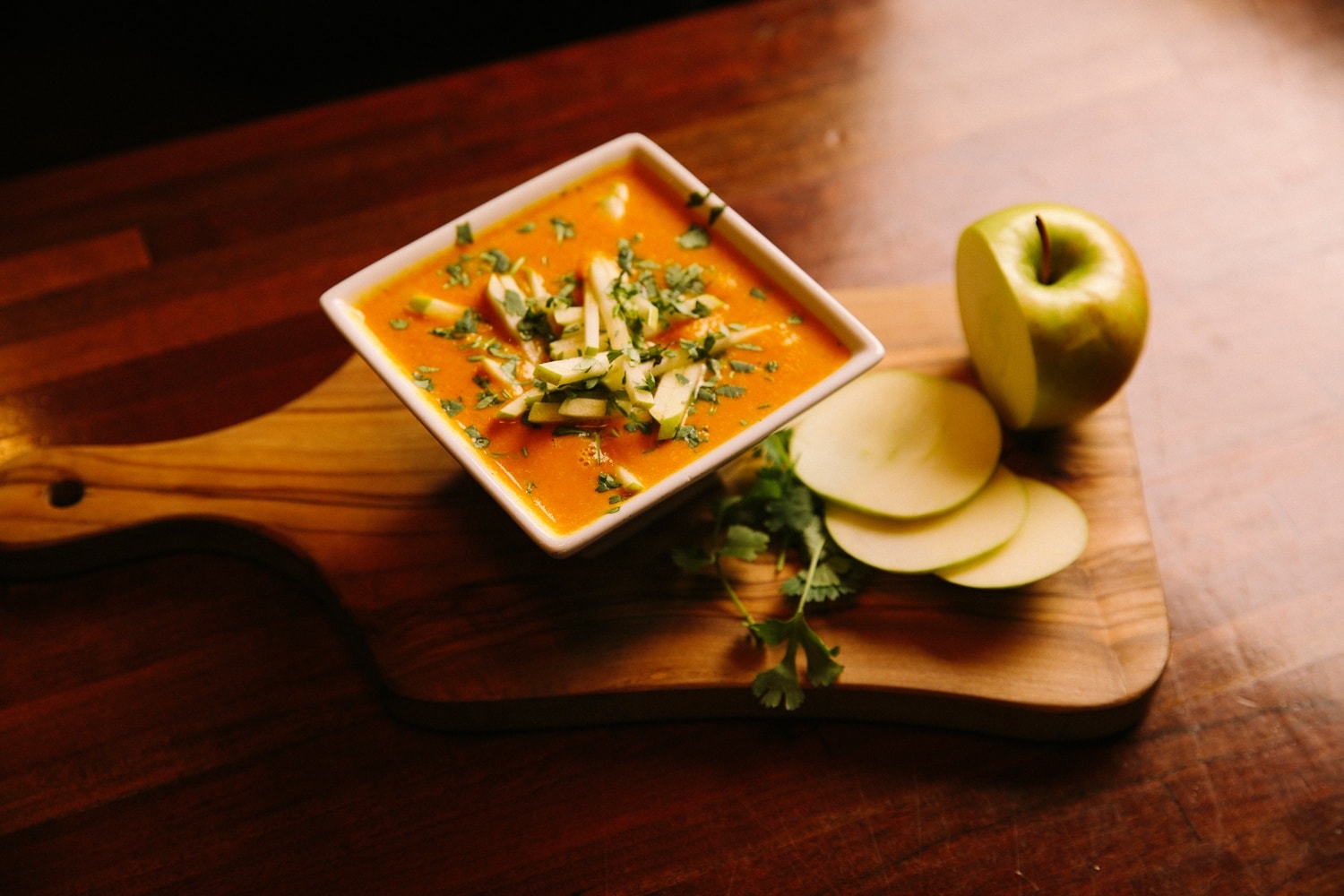 Instructions
Microwave squash for 30 seconds to make easier to cut. Peel and dice squash, apples, onion and sweet potato. These are going to be puréed so they don’t need to look perfect.

Sauté onion in a large stock pot until softened. Add apples, squashes and sweet potato and sauté for 2 minutes. Slowly pour in vegetable stock and bring to a boil until squash is soft.

Using an immersion blender, blend soup until smooth. Stir in cream and spices. Add more or less chipotle powder depending on how spicy you want it. 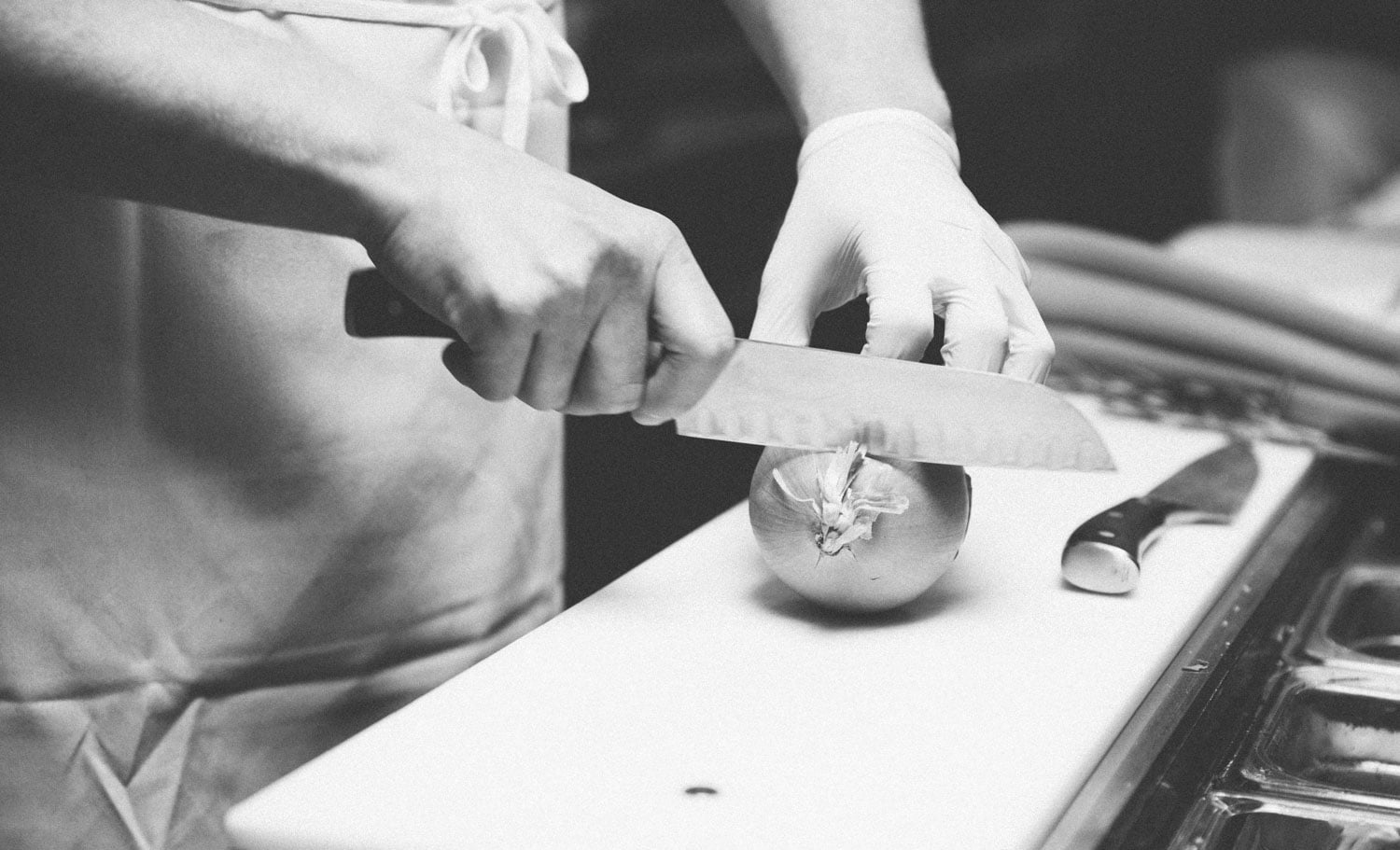