When Jeeyoon Kim takes the stage Saturday, February 23 at Ramsdell Regional Center for the Arts in Manistee, the audience can expect cascades of notes, contemplative pieces and music by Brahms, Debussy, Ravel and other masters. What the audience might not expect are the other aspects of Kim’s show.

There’s a visual element to the concert, with a slide show incorporated into the performance. New York-based artist Moonsub Shin was commissioned to provide the illustrations, making the tour for Kim’s latest album, Over. Above. Beyond., a true multimedia experience.

Kim also engages the audience by talking about her music.

“She’s a very interesting artist,” says Matt Thomas. As executive director of the Shoreline Music Society, Thomas was instrumental in bringing Kim to the area. “She’s into meeting the audience, not just signing CDs. Her idea is to have an interaction and conversation.”

That means not simply dazzling with her technical ability, though she can and does, but also discussing the how and why of the music—why she plays particular tunes, and the emotions they evoke in her. Kim also plays music that any audience can understand. 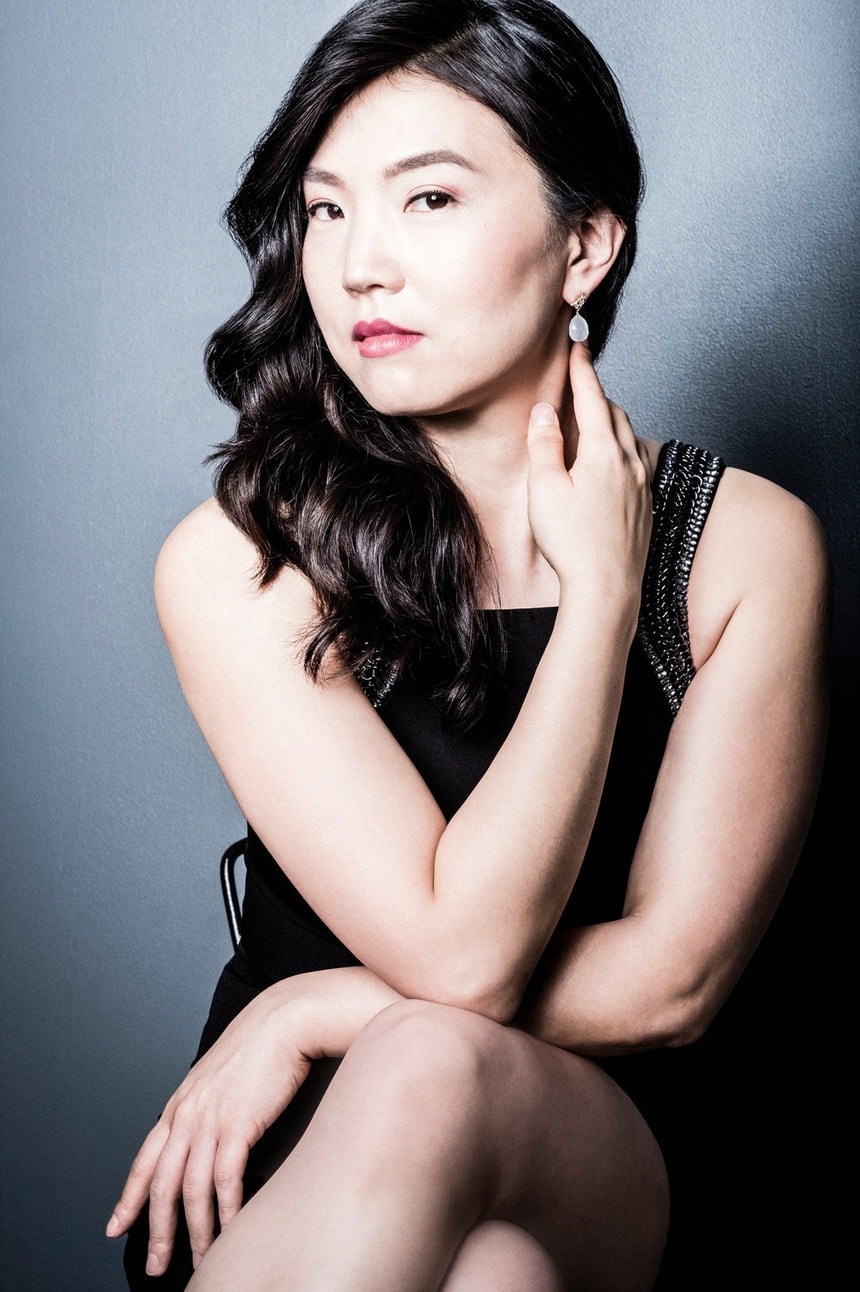 “She really likes to play songs that are accessible. One thing on the program is Mozart’s variations on ‘Twinkle, Twinkle Little Star.’ That’s about as simple as you can get, right? But these are devilish. It’s interesting and cool,” Thomas says.

Those words could describe not only the concert but Kim’s albums. For Over. Above. Beyond., Kim selected pieces that reminded her of flying. In her notes on the website for the project, she says, “I wish to communicate a sense of hope and joy, lightness, and a new beginning. When I am at the piano, time and space have no limits. These pieces of music were selected because they capture so vividly my vision of flight.”

Not the norm for a classical album. But neither was her prior CD. 10 More Minutes is made up of selections that Kim likes to perform as encores. As she writes, “I selected pieces for the album as they are like my good friends and personal to me, so often I perform those as an encore when people ask me to perform just ‘10 more minutes.’ I wanted to create this feeling of wanting to have 10 more minutes of any special experience in life musically. Thus the idea of this album was born.”

Kim has won several awards throughout her career, including a first prize in the Korean Music Teachers’ Association Competition at age 18. She made her debut as a concert artist the same year, performing Beethoven’s Piano Concerto No. 2 with the Camerata Orchestra in Busan, Korea. She later emigrated to the U.S. where she earned a Master of Music degree in 2005 and a Doctor of Music in piano performance in 2009, both from Indiana University. She furthered her studies at Butler University, where she earned a Master of Music in piano pedagogy.

Taking a cue from musicians in other genres, Kim has also made videos to accompany her music. The lush cinematography for Over. Above Beyond. does more than just showcase her in performance. The video juxtaposes Kim walking through an orchard or on a serene body of water with her at the piano. It too has won awards—“The Best Music Video” Platinum Award Winner from Independent Short Awards in Los Angeles and an Official Selection of RedWood Film Festival.

In keeping with the tenor of the other Shoreline Music Society performances, the concert begins at 5 p.m. with a social hour. Attendees are encouraged to interact with Shoreline staff and the artist. The show begins at 6 p.m., and following the concert is another opportunity for conversation. Thomas notes Kim’s approach dovetails with the way the group is trying to demystify classical and chamber music. “She exemplifies what we are trying to do with the Shoreline Music Society,” he says.

Tickets for Kim’s February 23 performance are $15 for students and $25 for adults. Box seats are $30. Get your tickets, and choose your seat, at MyNorthTickets.com.