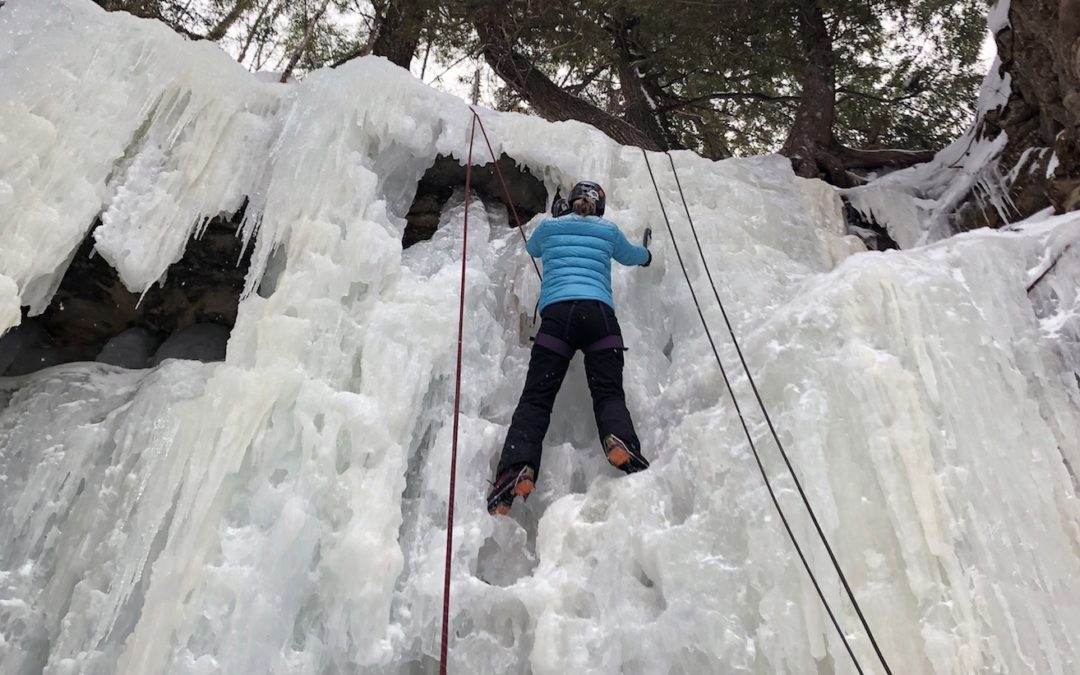 Climbing a frozen cliff in the middle of nowhere isn’t for everyone. But Molly Korroch likes a challenge (at least it sounds like a good idea when she’s home with a warm cup of tea). Molly heads north to try ice climbing in Munising.

I arrived at Michigan Ice Fest headquarters at 7:45 a.m. on February 17, the last day of the festival. Laden with my giant hand-me-down puffer and oversized tote bag stuffed with extra socks and snacks, I shuffled across the icy parking lot toward the entrance. Sleepy climbing guides and staffers exhausted from the week’s work littered the hallways. I knew how they felt. I’d spent the last three days covering the UP200 sled dog race, but at some point back in December, while I was planning the trip, I decided to attempt a new challenge: ice climbing.

A young woman checked me in and walked with me to the gear room where staffers filled my already full arms with crampons, a helmet, ice climbing boots, and a harness. I voiced concern that my puffer might be too puffy and possibly immobilizing. They glanced at my ancient puffer, nodded, and threw on a bright turquoise Patagonia jacket.

I headed to the room where my group was meeting: Women’s Intro to Ice. As my fellow women trickled in, I dumped my pile of gear on the ground and began to sort through it.

Our group had six students and two teachers: Emily and Kim. They helped us fit crampons to our boots so they’d be ready to reattach at the climb, and we went around in a circle and introduced ourselves. There was an amateur rock climbing couple from Grand Rapids, a student from Northern Michigan University with lots of solo camping experience, two high school seniors from Ann Arbor who attended a Traverse City wilderness summer camp for many years, and me: a very newly minted Michigander whose last camping experience was sometime in the late nineties.

I began to wonder if I was in over my head. 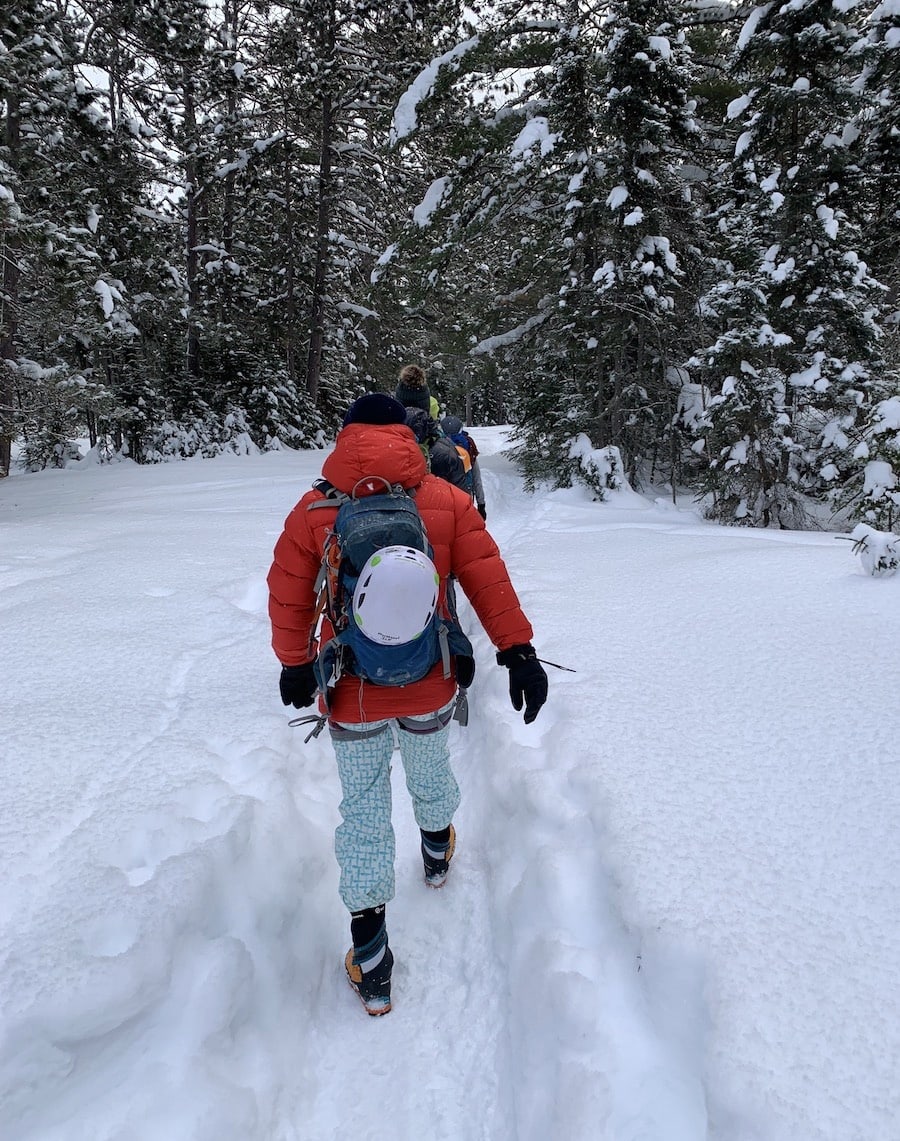 A shuttle dropped us off at our trail, which we followed into a forest thickly carpeted with new snow. We chatted as we walked, but conversations dissipated as we worked our way up and down steep hills. I was unsteady in the stiff ice climbing boots and toppled over more than once. Thirty minutes later we arrived at our site. Sweat dampened the edges of my forehead, and my sleeves were wet with snow.

I already wanted a breather and we hadn’t even started climbing. 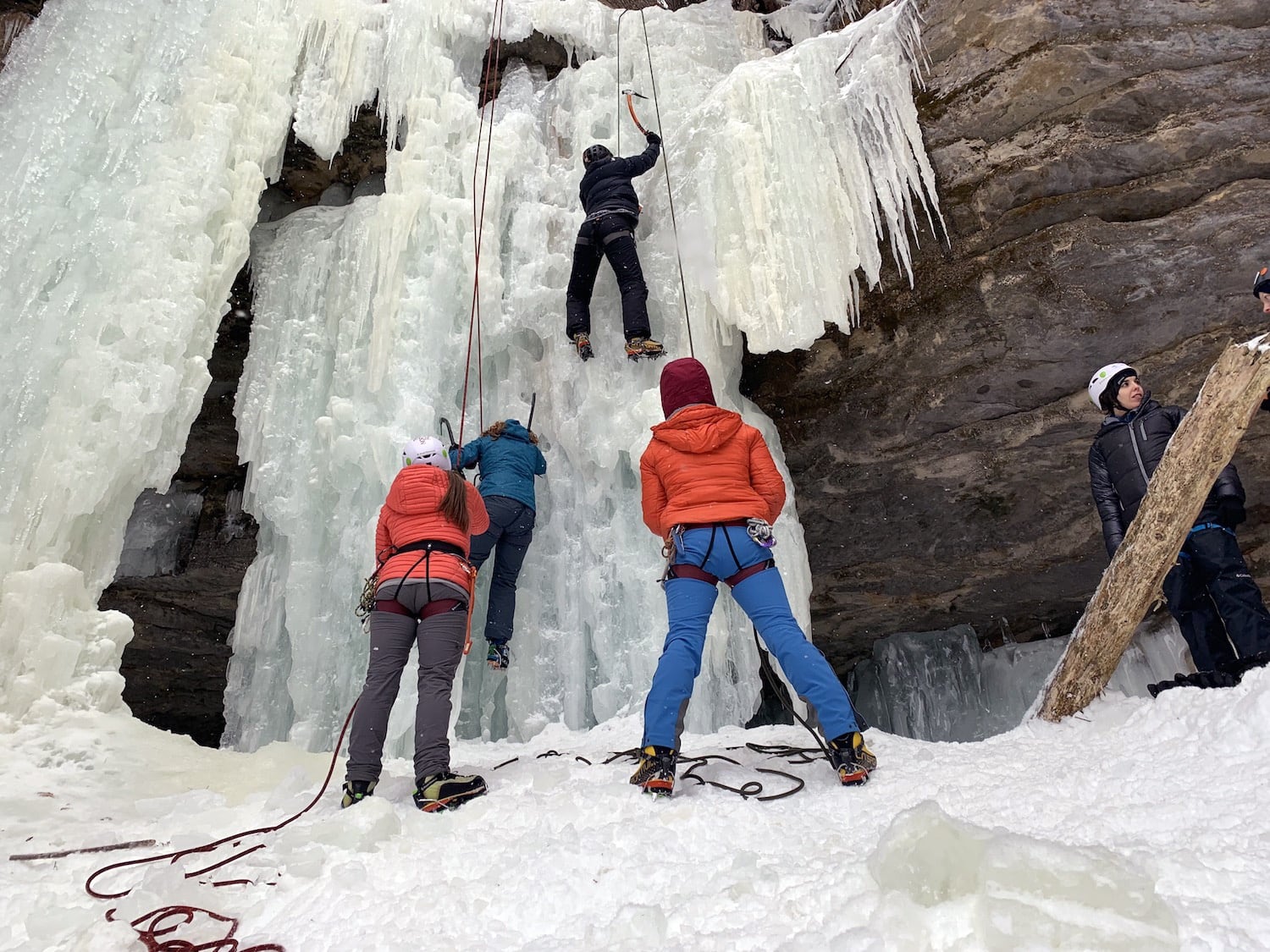 The frozen waterfall before us was striking. It hung 20 or 30 feet from the cliff where it tapered off into individual icicles thicker and longer than my arms. Emily scrambled up behind the cliff where she began securing straps and ropes while Kim stayed below and began giving instructions. We sat on the ground and listened intently as we pulled on our helmets and secured crampons to our boots. I was worried if I lost focus just for a moment I would miss some vital and life-saving piece of information. The Molly who signed me up for this while casually browsing the internet and drinking a cup of tea felt extremely far away.

Emily came down from securing our ropes. She and Kim took turns demonstrating while the other narrated what was going on: most importantly, get a good solid base when you’re ice climbing. Spread your feet wide and kick the toes of your crampons deep into the ice. Then raise your ice axe and swing it up overhead allowing the natural momentum of your arm to power a solid bite into the ice. Elbow to wrist. If done correctly, your body will form the shape of a triangle: wide feet with arms meeting together directly overhead. Kick, kick, swing. Kick, kick, swing.

We went around the back of the ice formation between the rock and the ice to get in some practice swings. I thought briefly about how I might reach back to wind up my swing only to hit someone in the face with my axe—or they could hit me—but I pushed it out of my mind with all the other worries.

Suddenly, it was time for one of us to try. 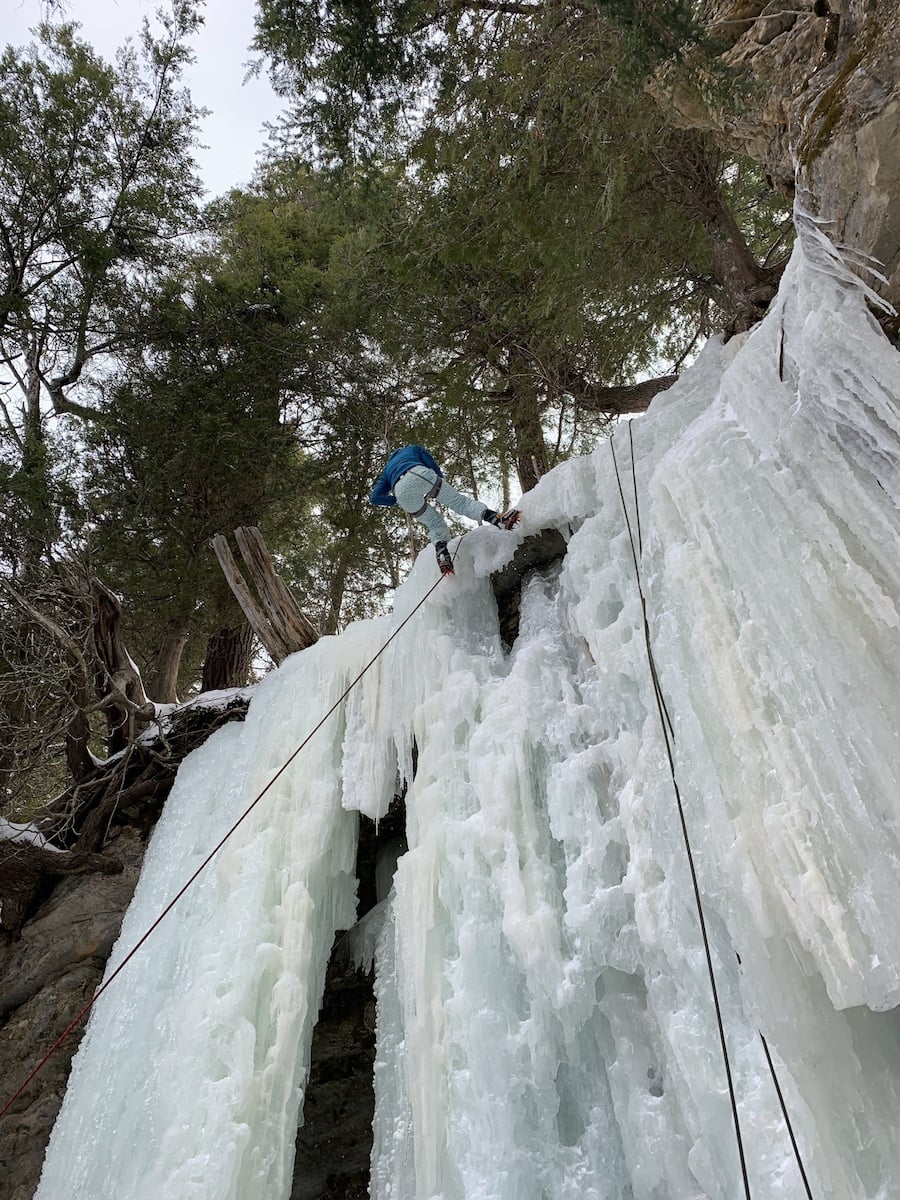 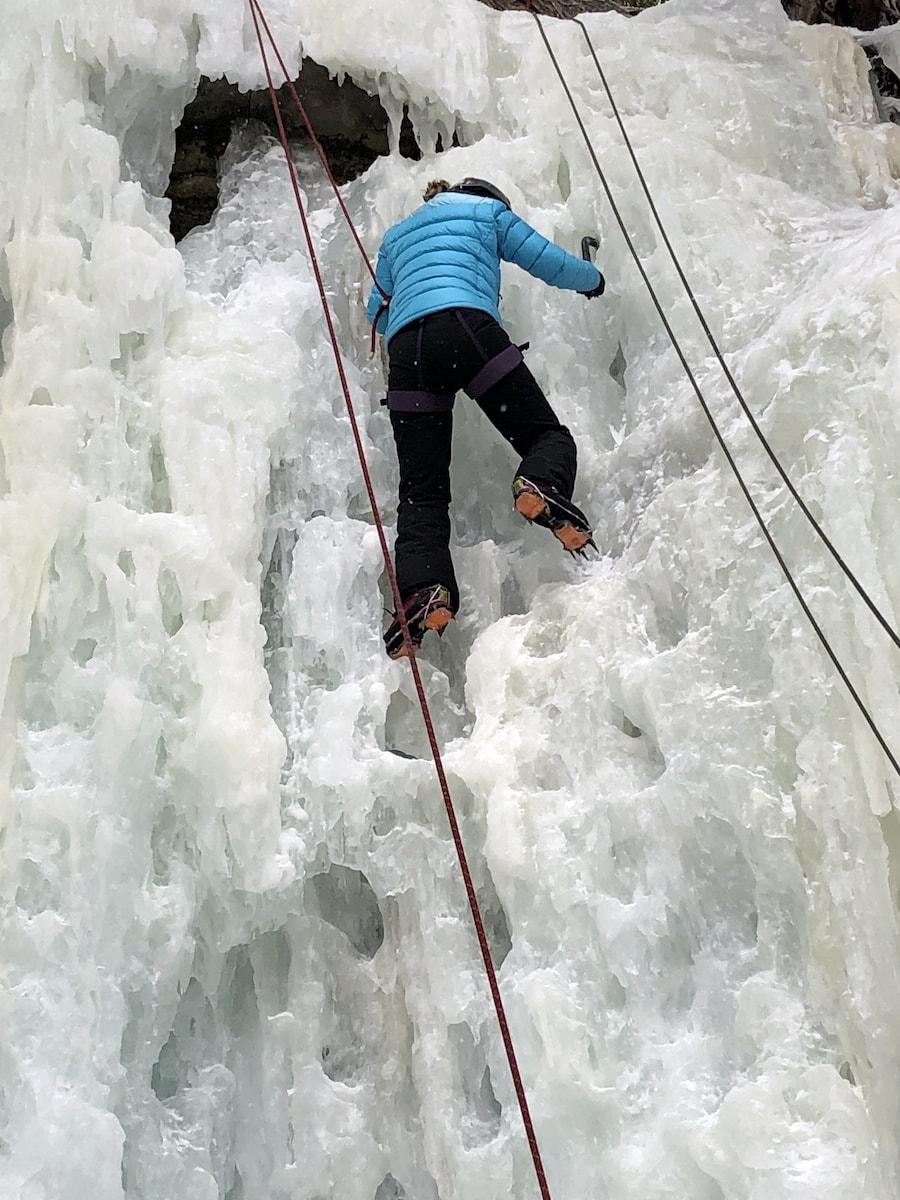 We spilled out from behind the ice. “Who wants to go first?” asked Kim. There was a brief pause. “I’ll go!” I said, figuring if I made an idiot out of myself then at the very least I wouldn’t have followed a tough act like the 18-year-old who had climbed glaciers in Alaska.

Kim helped me strap my harness to the rope and showed me how to tie a double eight knot. I approached the wall and looked back at her ready to repeat the climber’s refrain: “On belay?” I asked.

I jabbed my right toe into the ice and swung the axe overhead, once, twice, three times before it felt secure enough to support my weight. Balanced on my right toe, I kicked my left foot in for a good wide base and then repeated the process on my right trying to make use of the divots left behind by previous climbers. I pushed my legs up and in while leaning my hips close to the wall. Right foot, left foot, up.

Somehow, I made it to the middle of the route. I looked down below to Kim and the other women who all whooped and cheered. Down the slope, I could see the frozen lake and snow-covered pines bright beneath the sun. Forearms exhausted, or “pumped” as they say in the climbing world, I was determined to make it to the top. I turned back to the wall and continued kicking and swinging until I got to a large bulge in the ice.

“It is if you want it to be!” Kim shouted back.

I turned to get a last look at the lake before repelling down, my toes gently pricking into the ice.

We each climbed the route four or five times before heading back down to catch the shuttle to headquarters. This time, we sat and gleefully slid down the trail’s steep icy hills.

Back on the shuttle, I stared out the window, not quite able to process I’d actually done it. I climbed a frozen waterfall. With an ice axe. And crampons. It’s been over a week, and I still can’t quite believe it. But, as I sit here—back home with my cup of tea perusing the internet for whatever adventure might be next—I am eager to return to those crisp, clear winter woods and the steady, satisfying rhythm of the climb: kick, kick, swing.

Molly Korroch is a journalist currently based in Suttons Bay.