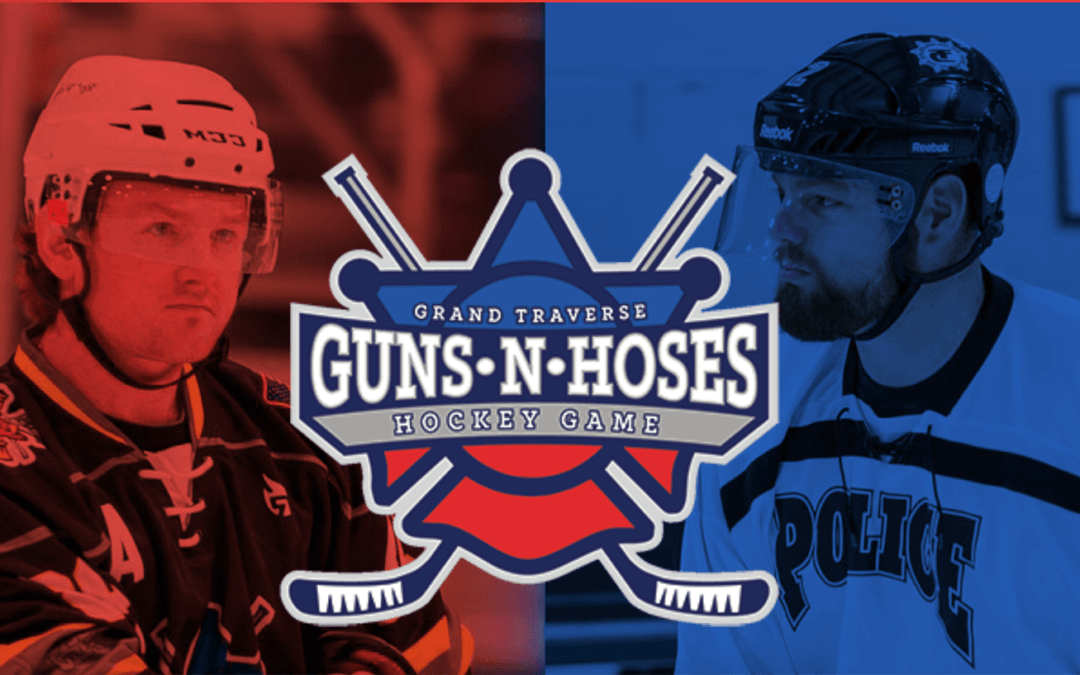 It’s second nature for public safety servants to want to help those in need. So when a captain of the Grand Traverse Metro Fire Department and a former firefighter/EMT heard news of a local family in need, Grand Traverse Guns N’ Hoses was born.

Guns N’ Hoses was founded in 2014 by Tony and Sara Posey of Traverse City. With a passion for giving back to the community and a love for the game of hockey, the Posey’s hosted a benefit hockey game to support a local public safety family that had been given the devastating news their child had cancer. The event was so successful in the first year they decided the tradition must continue. Now, after 5 years, more than 3,000 participants and more than $72,000 raised, Guns N’ Hoses is back for the 2019 benefit game supporting Leelanau County’s DePuy family on Saturday, February 23.

Can’t go to the game? Make a donation to the DePuy family.

In 2016, Mike DePuy (husband/father) was diagnosed with Stage 3 rectal cancer at the age of 39. After multiple surgeries at the University of Michigan and radiation and chemo here at the Cowell Cancer Center, the cancer unfortunately metastasized to his lungs and skin, bumping him to a Stage 4 cancer patient. Mandy (wife/mother) was diagnosed with Triple Negative Breast Cancer in March of 2018, just 9 months before Mike lost his own battle with cancer on December 4, 2018.

Mandy underwent a bilateral mastectomy in June at Munson Medical Center. Even though her breast cancer has been removed, having Triple Negative Breast Cancer/BRCA gene raises the risk of a cancer relapse within 3–5 years, as well as increased risk for pancreatic and skin cancers. The DePuy family needs our community’s support now more than ever.

If you can’t make it to the February 23 benefit hockey game, but want to send a donation to the DePuy family, mail checks to:
Grand Traverse Guns N Hoses
PO Box 293
Acme, MI 49610
Memo – DePuy Family

How you can help the Depuy Family

Grab your friends and family and head to benefit hockey game on February 23 as our local firefighters face off against police officers. Each ticket contributes to the amount raised for the beneficiary family. The doors will open at 6 p.m. at Centre Ice Arena with a silent auction, pre-game warm-up including a public safety honor guard and National Anthem, team introductions and family introduction. There will be a Chuck-A-Puck event, 50/50 raffle, shootout contest and more. Ticket to the game cost $5 in advance and at the door.

The organization applied for and was granted a 501(c)3 nonprofit status. Grand Traverse Guns N’ Hoses continues to grow annually and is far more than just a hockey game. Grand Traverse Guns N’ Hoses assists local individuals and families in the region during times of hardship, adopts families during the holiday season, provides scholarships for children in need, participates in the Adopt-A-Road program in Grand Traverse County, hosts both the annual hockey game as well as participates in the Detroit Red Wings training camp, as well as an annual golf outing. Learn about families who have been helped.