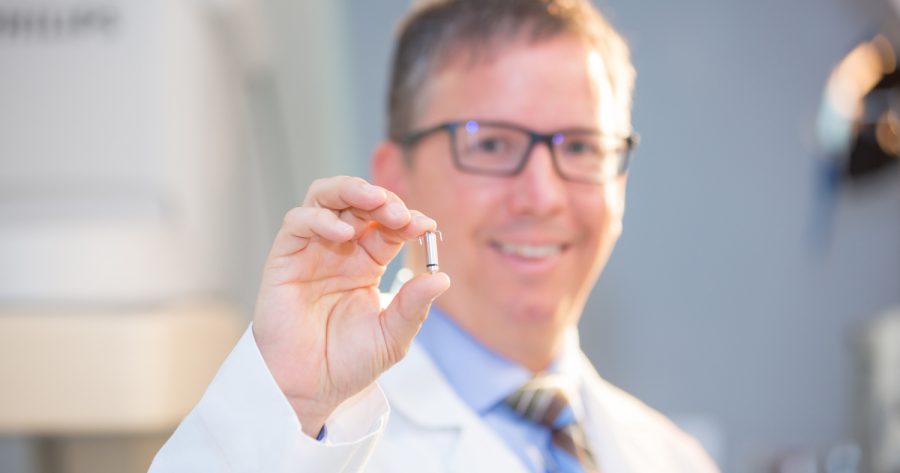 
For those diagnosed with a slow or occasional missed heartbeat, a condition known as bradycardia, the treatment of choice has long been a pacemaker. Implanting a device to keep the heart beating strong and steady has become a nearly routine procedure.

But that doesn’t mean there isn’t room for improvement.

Enter the Micra® Transcatheter Pacing System (TPS). Standard pacemakers generally run about 2 inches by 2 1⁄2 inches and about a quarter inch thick. Micra is 93 percent smaller than a typical pacemaker, about the size of a large vitamin pill. It was also designed, tested, and approved to be used safely with MRI scanners.

Dr. Daniel Buerkel, an electrophysiologist at McLaren Northern Michigan, implanted the first Micra pacemaker there on December 21, 2017. “Not only is its size advantageous, but it’s also leadless,” Dr. Buerkel says. Typical pacemakers have leads that attach to the chambers of the heart; Micra is actually implanted in the heart.

He says the decision as to whether to use the TPS or the standard pacemaker depends on the cause of bradycardia. “It’s for those who only need a single chamber (pacemaker). That’s 5 percent. Most require a dual chamber device,” he says.

But for that 5 percent, the device offers some definite advantages. The surgery to implant it is less invasive. With a lifespan of 12 years, it also lasts longer than the typical pacemaker’s six-to-seven-year average. Buerkel notes that because typical pacemaker patients are in their 70s, that means they most likely will only need one or two such surgeries in their lifetime. And because of its diminutive size, when it does have to be replaced, the old one is left in the heart and simply switched off.

He says despite the advantages it presents for those who only need a single chamber pacemaker, making it suitable for the majority of those suffering from bradycardia will not be easy. That’s when pacemakers with two leads are still preferable. “The next step is two leadless devices that can communicate (with one another). There are still a lot of technical challenges to make it small enough and still communicate, though we are excited about the possibilities.”

Click the cover to read the latest issue of MyNorth Medical Insider.