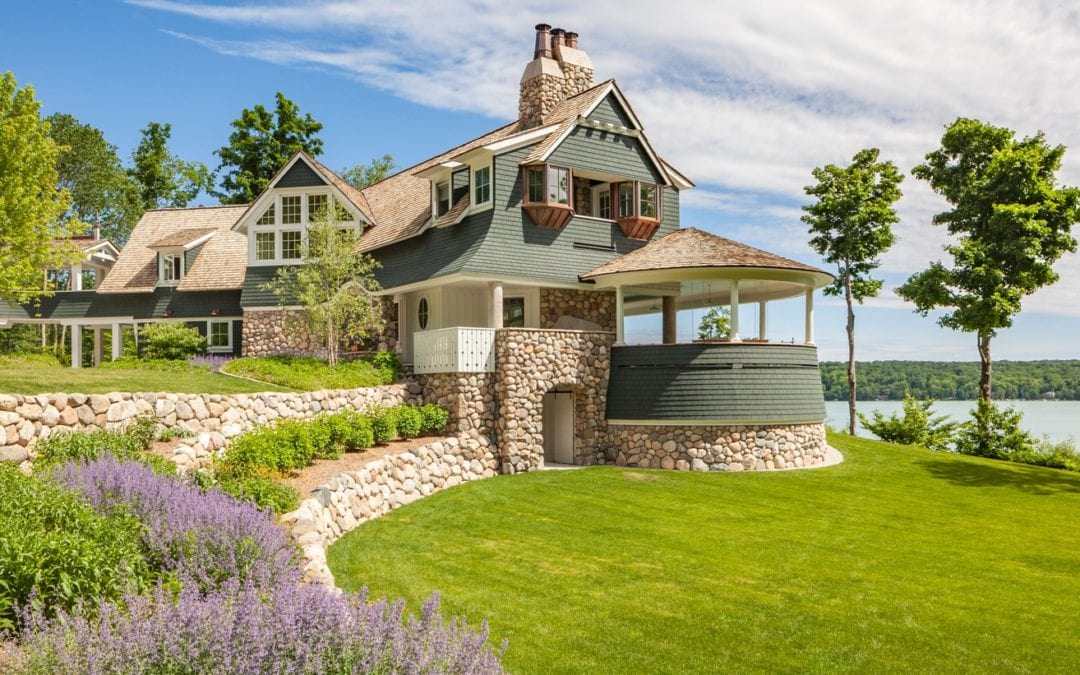 Ernest Hemingway might have felt right at home in this remodel of his mother’s old cottage and an adjacent new home at his family’s former property on Walloon Lake. The historic Grace cottage is in good hands.

In high school in Maryland, where he grew up, Steve Virostek got “one A one time,” on a paper he wrote about a short story by Ernest Hemingway. He claims it was one of the only A’s he ever got in school, which, believe him or not, doesn’t really matter much seeing as he co-founded and is principal at the successful Triumph Development, a real estate/construction firm with offices across the country. What does matter, is that the story—and the A—turned Steve into a Hemingway fan, of sorts.

Fast-forward to his early 20s, just after he’d married Joanne, a woman whose family had a tradition of summering in Northern Michigan. Steve himself had fallen in love with our inland lakes and Lake Michigan shoreline the first time Joanne had invited him for the summer. On this particular visit, Joanne’s family had rented a home on Walloon Lake’s Sumner Road. When Joanne told him that the cottage next door had been built by Hemingway’s mother, Grace, Steve figured he’d better check it out. So, thinking it was abandoned, he cracked a beer and wandered over for a look.

That didn’t sit well with the owner who was home at the time. “Before he ran me off, I realized what a special property it was,” Steve recalls. 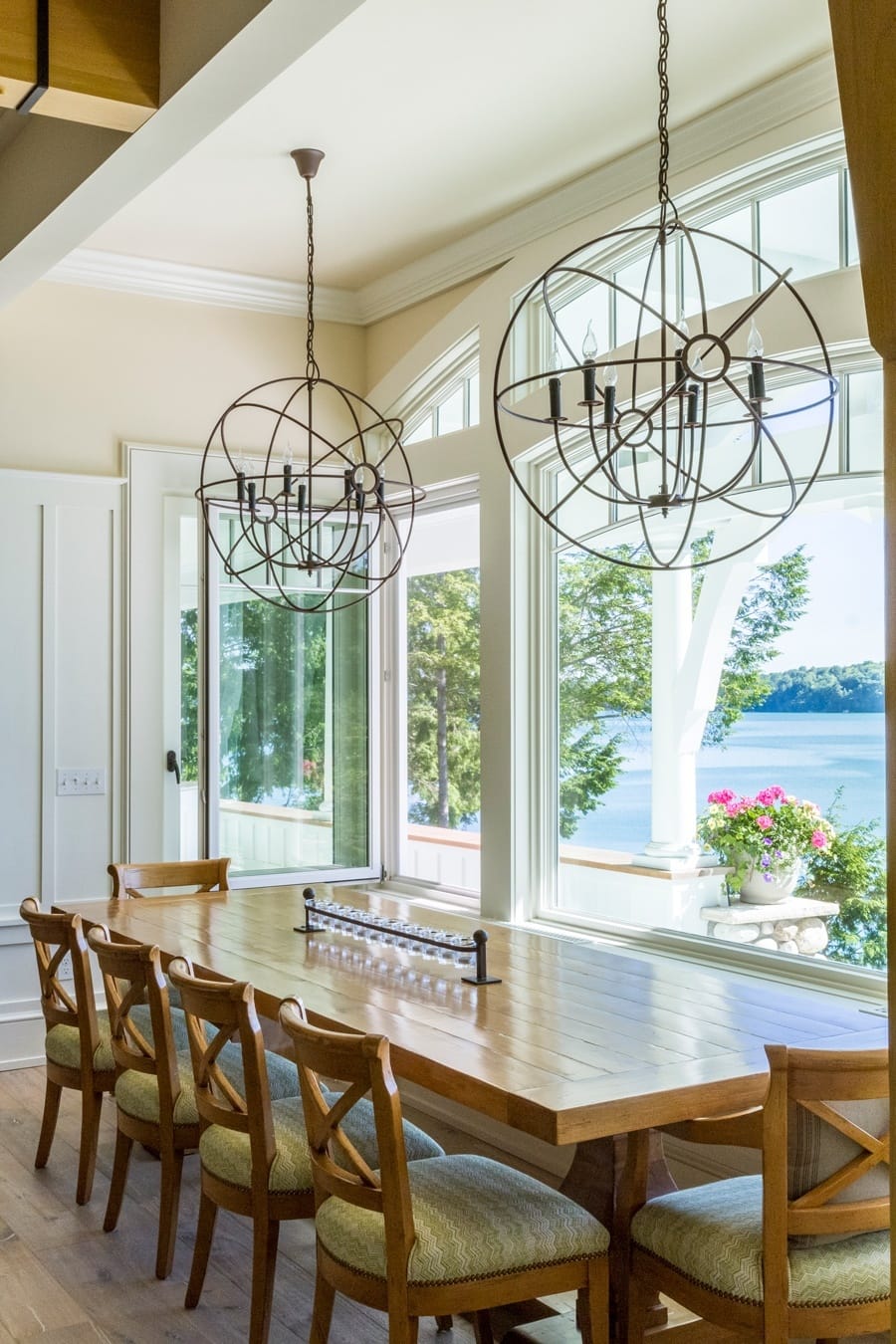 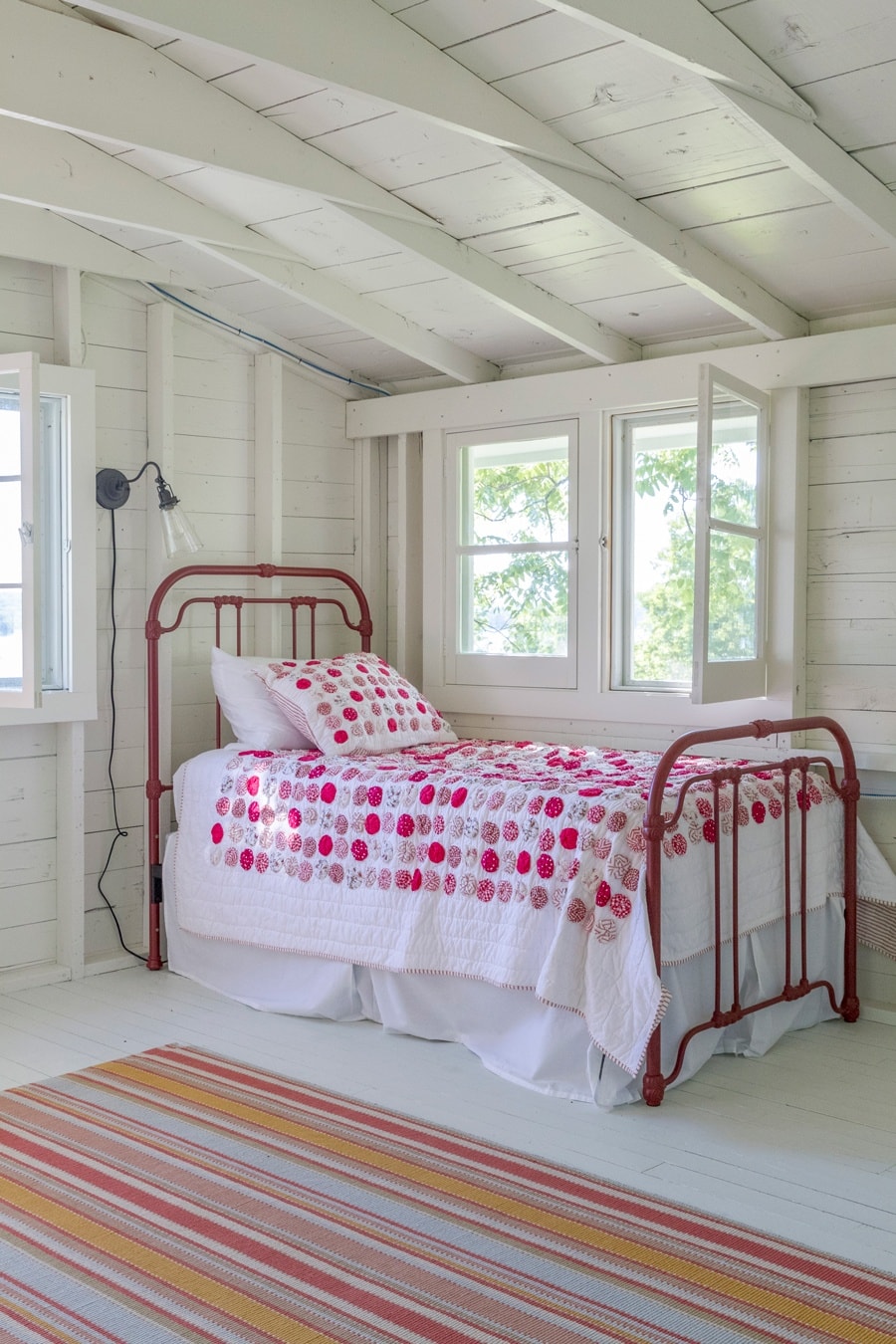 Turn the clock forward again to 2013 on a morning when Steve was waterskiing with a friend on Walloon Lake near where Sumner road ends. The friend nodded over to Grace Cottage and said, “You know that property is for sale.”

No convincing was needed. Not long after, the Virosteks were owners of the property, known as Longfield Farm, where Grace cottage is set. Even before they closed on what had been the old Hemingway farm, the first decision for the couple was what to do with the cottage—a structure that any Hemingway aficionado would fight to preserve. But a builder, not so much. “It was pretty rough,” Steve remembers. “The porch was slack and not structurally sound. There had been animal damage over the years to the siding. The kitchen and bathroom were old. It was to the point where it was going to be a lot of money to fix up.”

Working with Conquest Builders of Charlevoix, the couple set out to modernize the cottage while making every attempt to take it back visually to the early 20th century, when Grace Hemingway summered here—and her son Ernest would row over from Windemere, the family cottage across Walloon Lake to work on the farm. For recreation, he’d hike down Sumner Road to the tiny hamlet of Horton Bay where he became friends with the Dilworth family. Hemingway readers will remember the Dilworths from the Nick Adams stories that Hemingway penned in Paris where he and his new wife, Hadley, moved after their wedding in Horton Bay. And after they’d spent their first night as newlyweds in Grace Cottage. 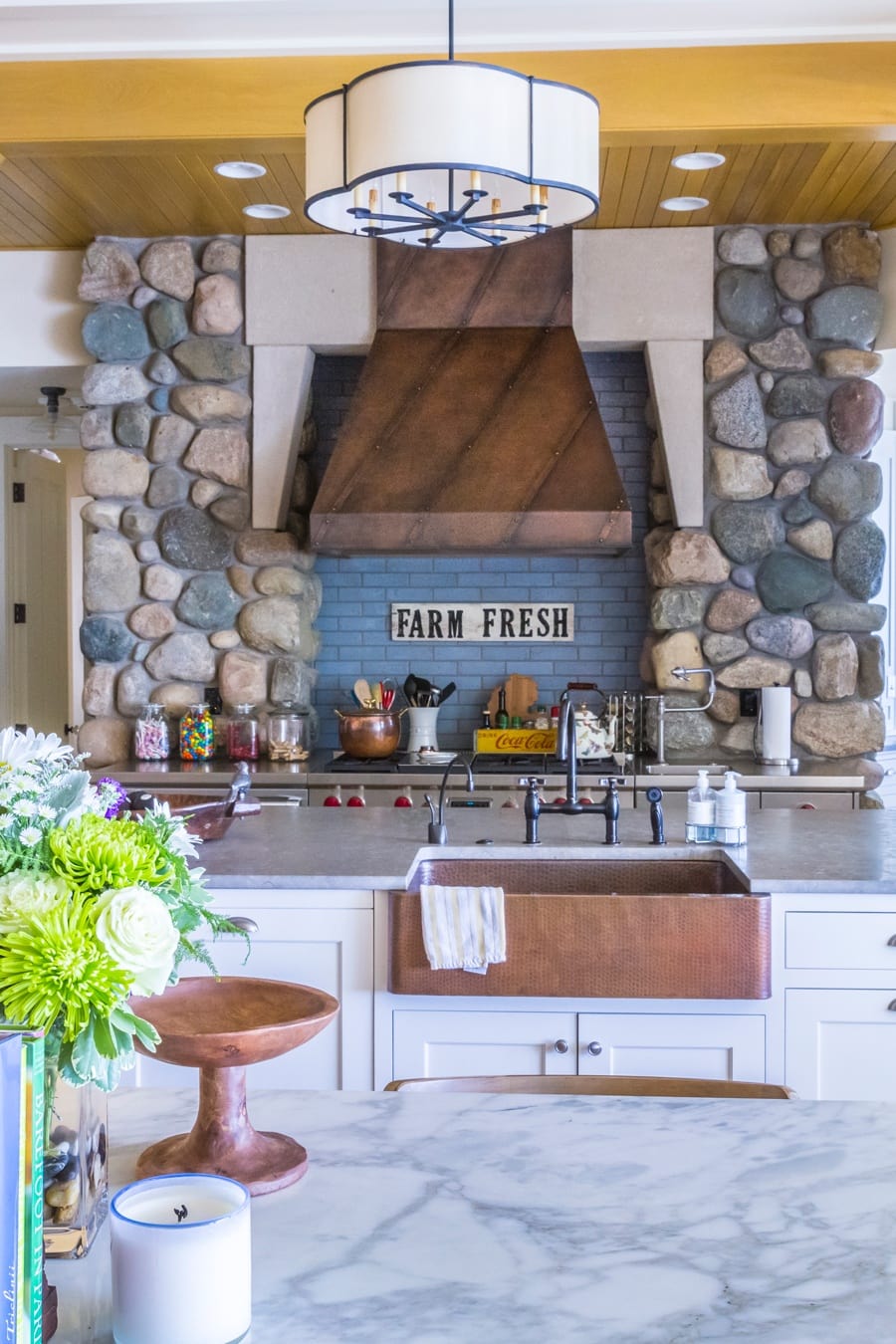 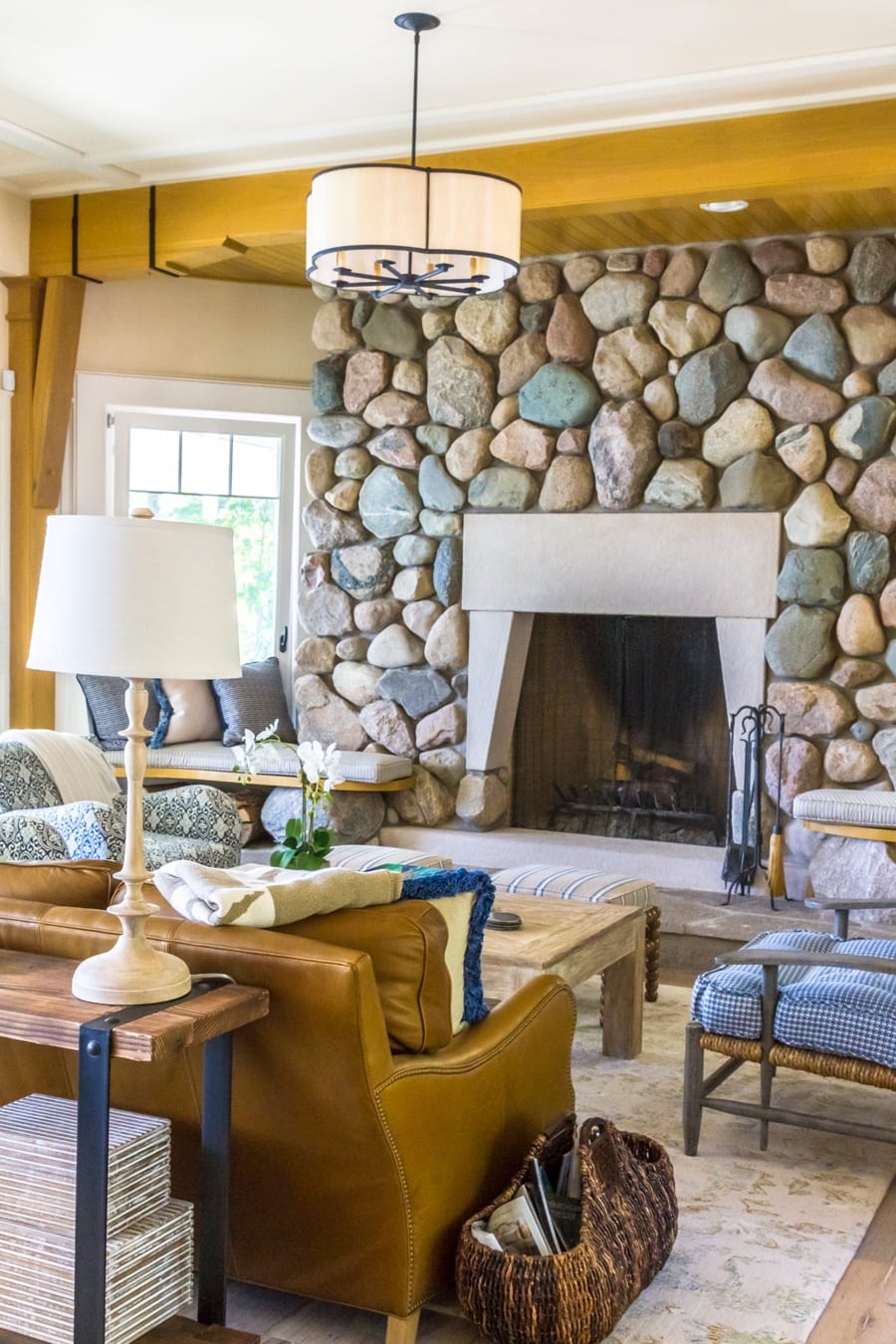 Channeling the Hemingways, the Virosteks removed the brick fireplace facade (probably a 1950s addition) and replaced it with fieldstone—most likely what the original fireplace was. In the kitchen, they replaced formica countertops with wood and pulled up the 1960s-era linoleum on the floor and replaced that with wood, as well. Steve found a circa-1930s farm sink (the oldest one he could find) and had it installed. “When our guests come they have a choice between staying in the big house or at Grace Cottage,” Steve says. “They invariably choose Grace Cottage.”

About that big house. There was enough property at Longfield Farm for a modern home, but Steve and Joanne were determined that anything they built would have the period feel of Grace Cottage. After interviewing several architects, the Virosteks settled on Ken Richmond of Richmond Architects of Traverse City. One signature of Richmond’s long, successful career has been his ability to translate the regional historic cottage vernacular into modern-era second homes. “Ken got our vision right away,” Steve says.

Finished in 2015, this lovely main house settles into its site as comfortably as if it were built in Hemingway’s era. The effect is a product of Richmond’s vision, paired with that of landscape architect Maureen Parker of Common Ground Landscapes, who Steve refers to as the “the site whisperer.” 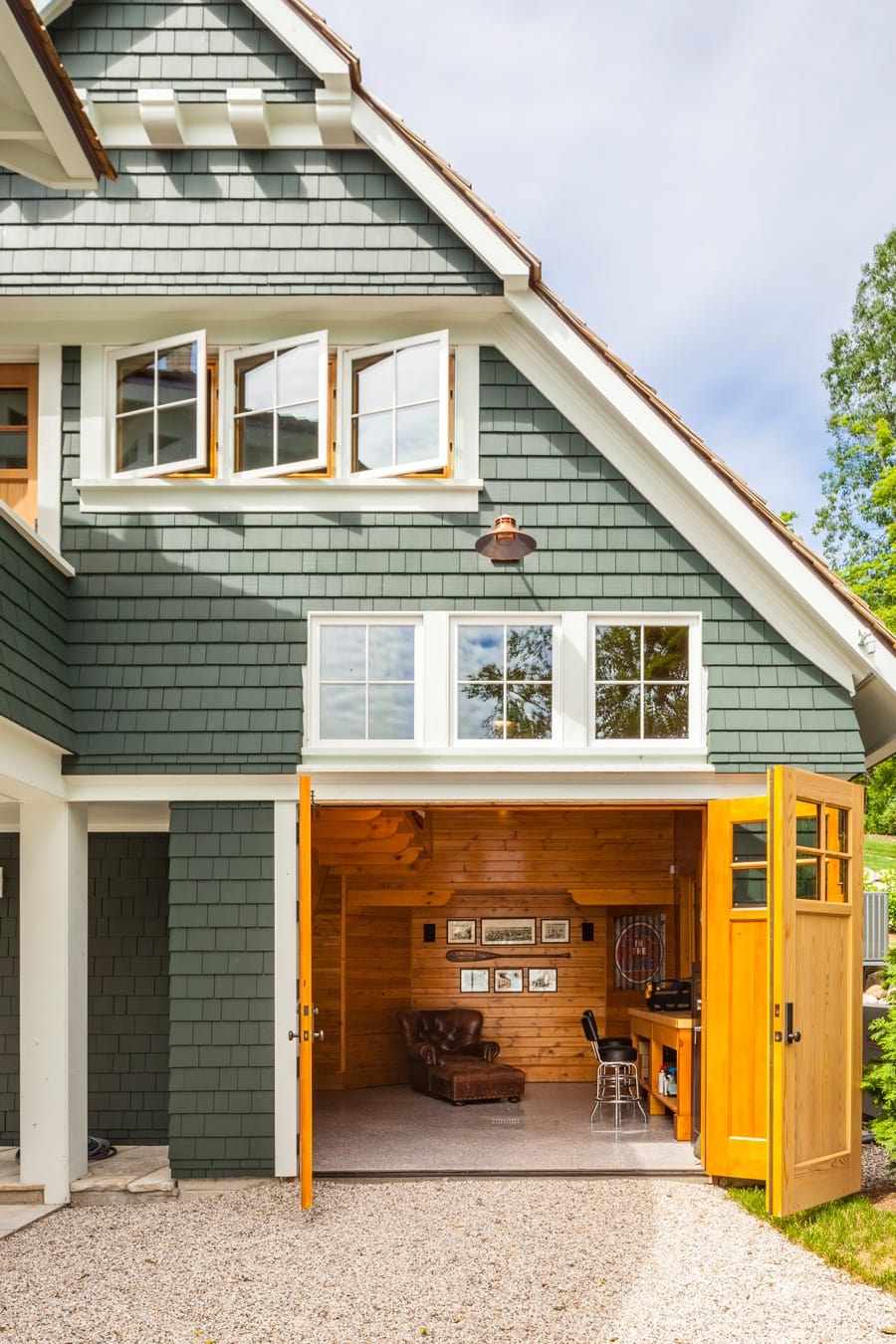 The finished product is a four-bedroom home with a catwalk bridge that connects to a structure designed to look like a boathouse but that is outfitted with a man den on the first floor and guest quarters on the second. The home incorporates historically correct details from cedar shake siding, copper window frames, right down to the scupper—an open space for water to drain—that runs between the porch floor and railing.

Indeed, that porch is the pièce de résistance of this home. Covered and a hundred feet long, it spans the front of the home, culminating at each end with small rotundas. “We live on it in the summer,” Steve says. “There are rockers across the front, and one end is for dining and the other has a porch swing and a fireplace.”

As the homeowner and architect envisioned, the porch connects the home to the Walloon Lake setting—and to the historic sensibilities of Longfield Farm. 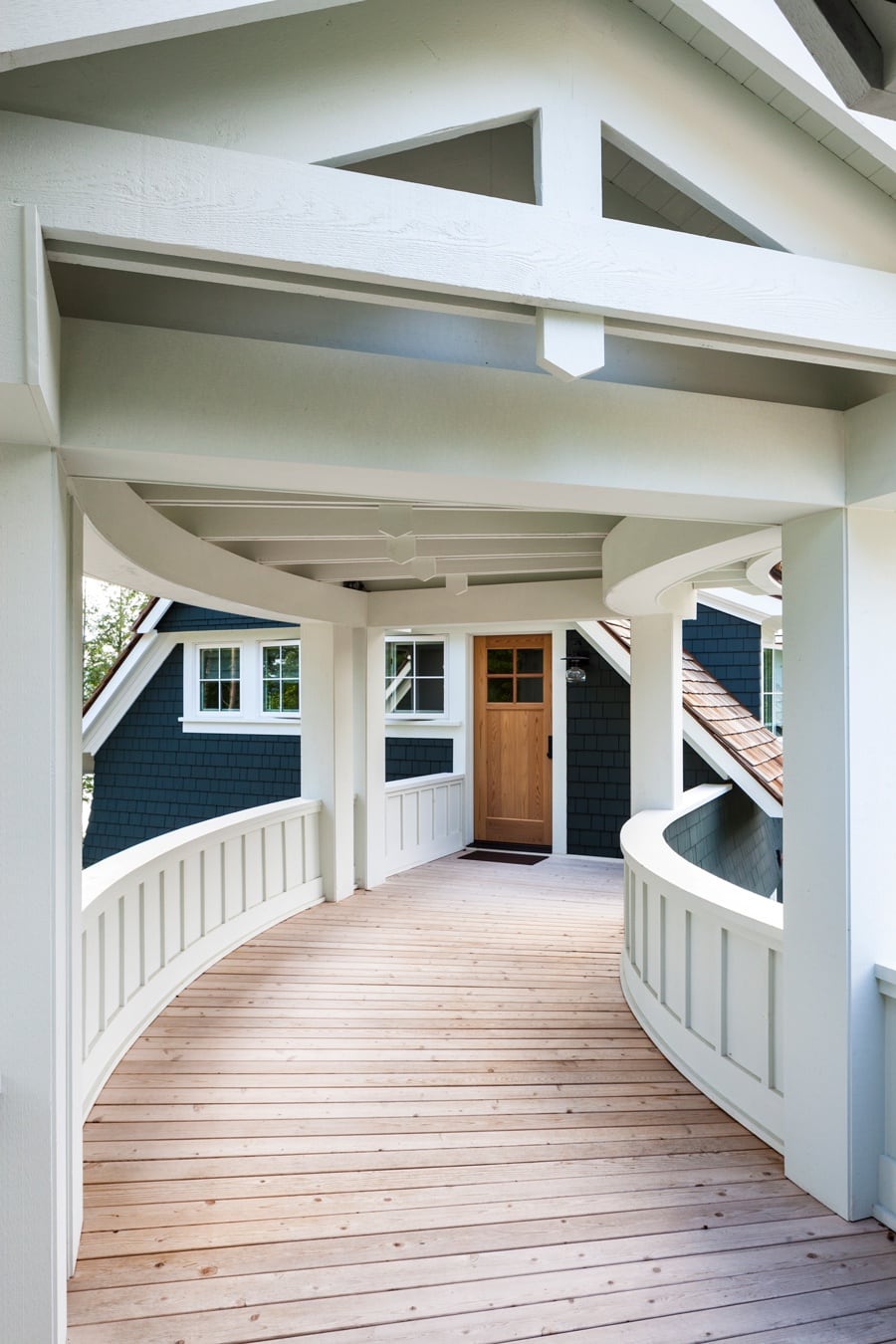