Not much about style and design escapes Hillary Voight, a warm and vivacious woman who has an arts background but is now a Realtor for the Traverse City-based firm, Venture Properties. So the irony of living in one of Traverse City’s most modern apartments—two walk-in showers, sleek kitchen, big windows—while she and her husband, Matt, searched for an older home in downtown Traverse City did not escape her. But the couple was clear on what they wanted: a real neighborhood with an old-fashioned community spirit.

Matt, a talented furniture builder and third-generation carpenter, has his own eye for design, so the pair took their house-hunting mission seriously. Which is why it is so very ironic that they purchased a yellow-vinyl clad mess on Washington Street. The hip-roofed bungalow, built in 1905, had been abused by renters for years and its address was well known by the Traverse City police department. “Tasers were used …,” Hillary says with a laugh. Nevertheless, the home they would nickname Martha for its address on Washington Street, had several redeeming features, including its walkability to amenities including fabulous Lake Michigan beaches, Oryana Community Co-op and Northwestern Michigan College where Hillary worked at the time as a graphic artist. But perhaps most important, Hillary recalls, were the welcoming vibes from the neighbor next door who came across the lawn to introduce herself when the Voights were first shown the home.

But some skeptics, and there were plenty of them, just didn’t get it. “Some people were just plain blunt about it, saying things like, ‘This is what you bought?!’” Hillary says.

The pair jumped into the ginormous renovation project with characteristic energy and a clear vision for a fresh modern home with a vintage soul. Out went almost all of the old windows and in went new energy-efficient Anderson windows. Off went the yellow siding—to reveal a flamingo pink paint job over some nice original board-siding that Matt added batten to. He went on to add cedar shake at the eaves, a dove-gray paint job and to replace the cement slab at the front door with an honest front porch. On the interior, they peeled and chiseled up two layers of linoleum (one with a flower motif, the other faux brick) from the kitchen and living room to uncover the original wood flooring—fir in the kitchen and oak in the rest of the home. They also removed a wall between the kitchen and formal dining room to create eating and gathering space in the kitchen—a room they gutted and refurbished with custom cabinetry that Hillary envisioned and Matt designed and built. An alder island top, custom hood, quartzite perimeter countertops (that look like marble but can withstand red wine and Bloody Mary spills), a subway-tile backsplash and touches of beadboard and shiplap on the walls round out this room’s cook and hang-out appeal.

Upstairs. Well, upstairs, they agree, caused the only tension between them in the entire project. Hillary was set on raising the ceilings. Matt told her that the lath and plaster would be a huge mess. They compromised on raising the ceilings in the two bedrooms and bathrooms but keeping the low landing ceiling intact. Hillary was right, the three rooms are now light-filled and dramatic. Matt was right. They were up to their knees in a lath and plaster nightmare. 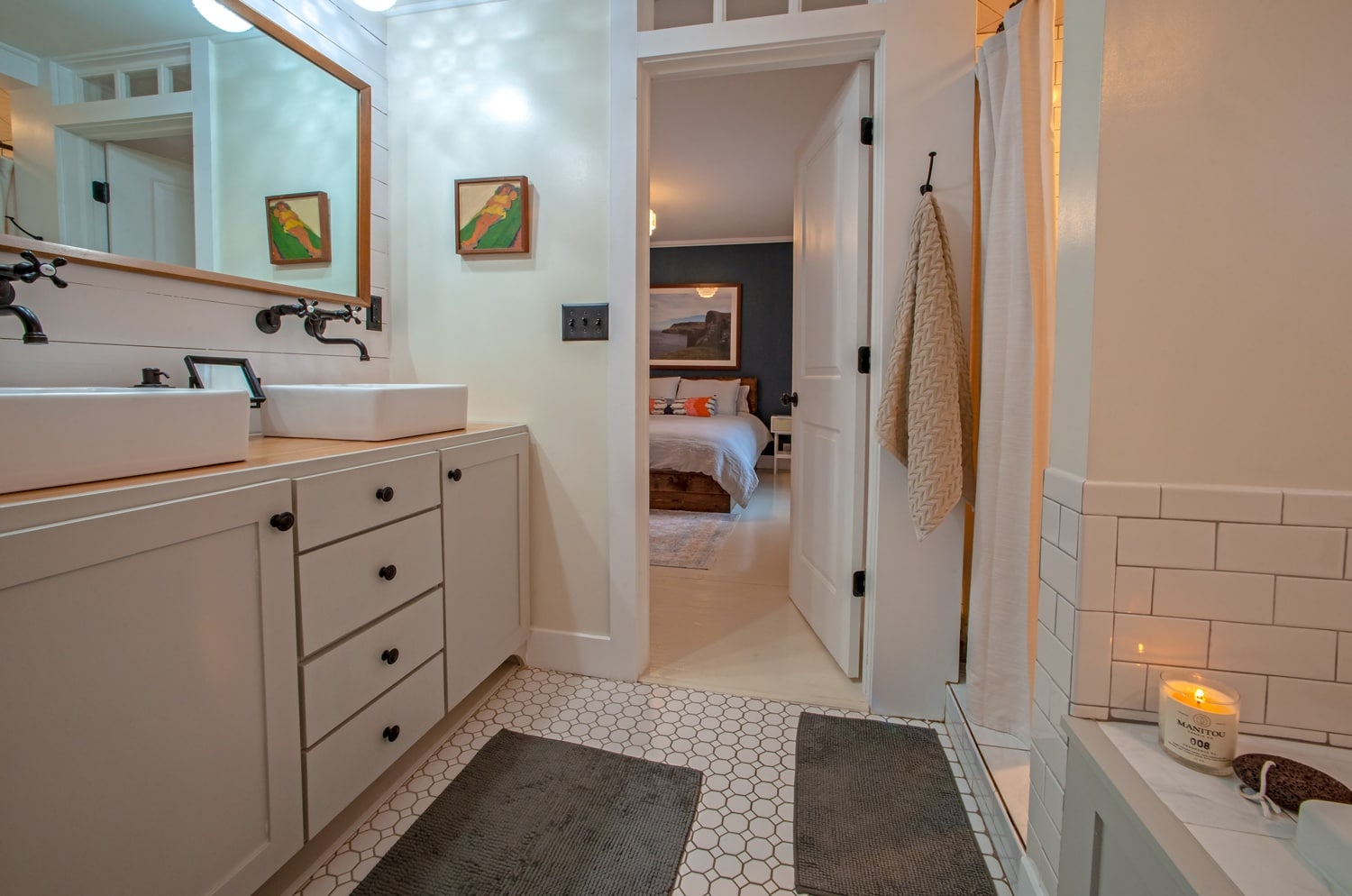 Finished now, the home is a delight to live in. But the best part, the very best part of living in Martha, the couple says, is the neighborhood. There are summer block parties, holiday cocoa and wreath-hanging gatherings. In good weather, folks migrate to their front porches—with wine and extra glasses. The snug little backyard feels generous because there is a side gate in it that connects to the next yard, and the next yard has one that connects to the next yard and then that one to one more …