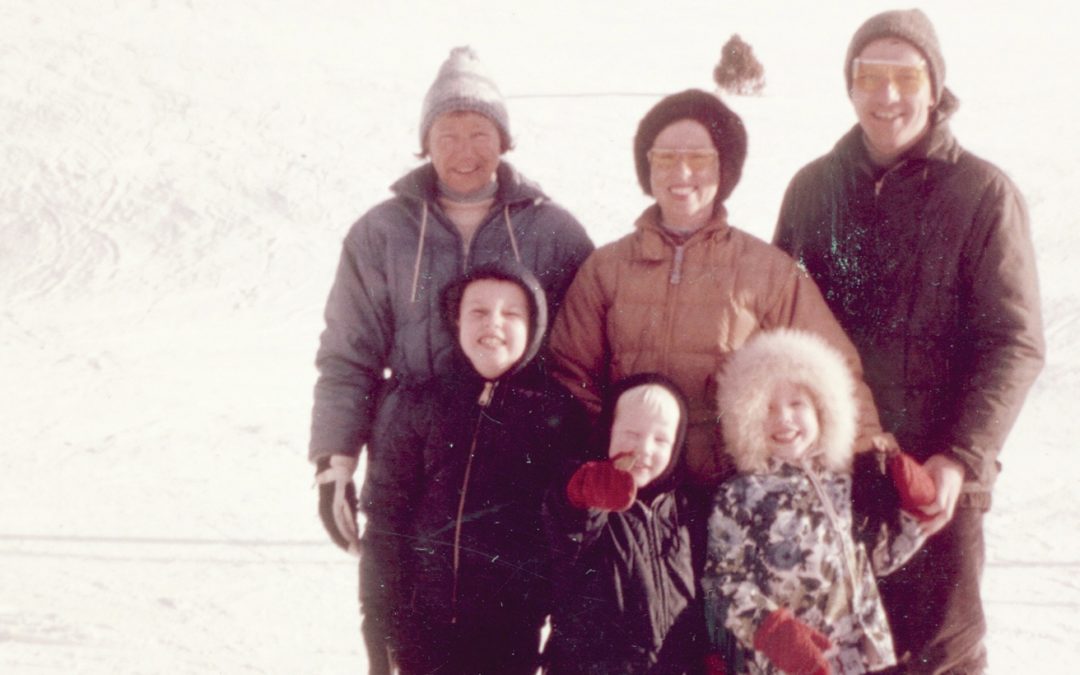 Dorie Sarns would often run the chairlift for an extra hour on lovely, late-season evenings, so we could all ski just a little bit longer.

In this picture, Dorie smiles alongside my parents who are young and stylish, with sporty yellow ski glasses, my mom in a fur hat. I’m the youngest child, 4 years old, and in my first ski season. It’s 1965, the year Dorie assumed ownership and management of Nub’s Nob where I would spend every winter—Thanksgiving weekend to the end of March—for over 40 years, cultivating a deep love for the sport I had to abandon.

From those early days, until she sold the resort, Dorie ran Nub’s like a club for locals, and for herself. I can still envision her riding the lift as her two dogs chased her up the hill, then back down as she descended with her definitive, controlled style. Even from a distance, we all knew it was Dorie as she took on the steepest hills, Scarface and Chute, even into her late years. I remember her as fearless, kind, and generous, holding costs to $5 day tickets, so anyone who wanted to could afford to ski.

By middle school, youth ruled the hills, flying past each other in tight mischievous squadrons, skiing out of bounds, building jumps and sometimes waiting midway up a short, steep run called “Crazy Otto” for anyone we knew to pass by at the bottom on their way to the lift. We’d tuck one after the other straight down like strafing warplanes to spray snow on our victims as we flew by, and on snowy days, the boldest among us would jump off the old red chairlift as it crested the hill at the top of Smokey, hoping ski patroller Hank Miller wouldn’t catch us and take our lift tickets.

We crowded the fire inside when cold, just long enough to defrost toes, then headed back out, all the time knowing the dear Germanic women in hairnets and worn, white aprons were glazing donuts in the basement kitchen, and anticipating Wanda Davert’s voice calling out the loud speaker when they were ready, sending children tucking downhill, kicking off our skis and digging in pockets for change.

As time passed, skiing became an obsession, and while most peers admired the baseball, basketball and football heroes of the day, our heroes were slalom and giant slalom champions, Jean Claude Killy, Ingemar Stenmark, the Mahre brothers, and the fearless downhiller, Franz Klammer.

When I joined the ski team freshman year, I found my only positive association with school. It was the early days of the program, through the kindness of the shop teacher, Mr. Festerling, a novice skier, who agreed to drive the bus and help set courses. So, we coached ourselves until Larry Gunderson took over, bringing with him the talented Shorter Brothers, Bill and Dean, who coached the team into one of the powerhouse programs in the state.

It offered me discipline and direction in the insights of their paternalistic assistance. Dean, especially, understood how to build my fragile confidence, commenting with smiling praise and redirection: “That was good—now try it again and focus on finishing the turn,” while Bill pushed me toward aggressiveness and higher speeds. Through their instruction, we became talented racers and far better skiers. No doubt I could not have survived public school without them. They are emblematic of Dorie’s spirit, the sense of familial ownership of place, and the passing on of skills and love of sport.

Four years later, after racing for the University of Michigan, I became Petoskey High School’s head ski team coach, driving young skiers to Nub’s every school day, setting courses, sharing what skill I’d acquired over the years. Jack Frank had begun a feeder program, The Ski Academy, we started a booster club, a middle school program, a ski swap to raise funds, and the boys won the state championship in 1987.

I moved on from coaching afterward, and in 1989 tore my right ACL off on the race hill, the beginning of the slow physical decay of that knee, and over time, a domino effect from an early life of high-speed skiing crashes, mountain bike crashes, a more recent motorcycle crash.

Oddly, it’s been 17 years since I’ve skied. After seven surgeries on most of my major joints, I feel like I’m held together with binder twine and Gorilla Tape. Still, when powder wafts from the sky, and on late-season evenings, I think of Dorie, and it hits me how strange it is not to be in line at the green chair, among the old companions, anticipating the pull of gravity, the bite and rhythms of carving skis, and the warmth and generosity of those who came before.

This essay is featured in the December 2018 issue of Traverse, Northern Michigan’s Magazine. Subscribe to life Up North.