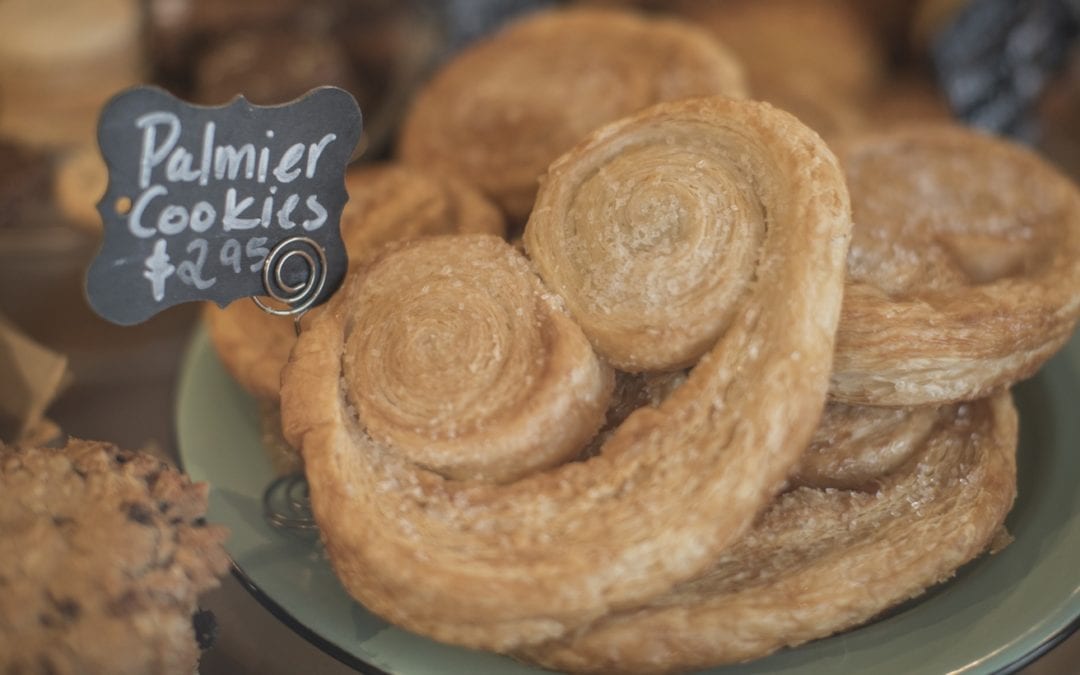 If you want to bring a neighborhood together, breaking bread is a beautiful place to start. Begin your morning at Common Good Bakery in Traverse City.

This story is featured in the December 2018 issue of Traverse Magazine. Get your copy.

The stars are out, and so are the morning buns. It’s a happy day at Common Good Bakery, most especially in the pastry case. Besides those buns—croissant dough rolled up with cinnamon, sugar and orange zest—there are buttery cheddar scones, almond croissants anointed inside and out with frangipane, and plump pain au chocolate that were hours in the making. Before their 6 a.m. debut, all these pastries were mixed, scooped, patted, proofed, folded, rested, rolled and many other verbs that makes them so irresistible.

And those breads: sourdough country loaves, with funny little “ears,” and sesame semolina baguettes, tips kissed with char. The aroma makes you want to tuck one under your arm and run to find the nearest pot of soup.

Common Good Bakery is a nook of respite smack dab in the bustle of Fourteenth and Division Streets. The baking team’s cadence, led by chef and owner Jason Gollan, is measured and relatively quiet, except for the intermittent roar from the 13-foot steam-injected brick oven. It was imported from Arcole, in the Veneto region of Italy and built by hand in the bakery. “It took five of us a week,” says Gollan. “The manufacturer sent an engineer over from Italy, a man named Mario. The most amazing thing is that Mario had no instructions. It was all in his head.” 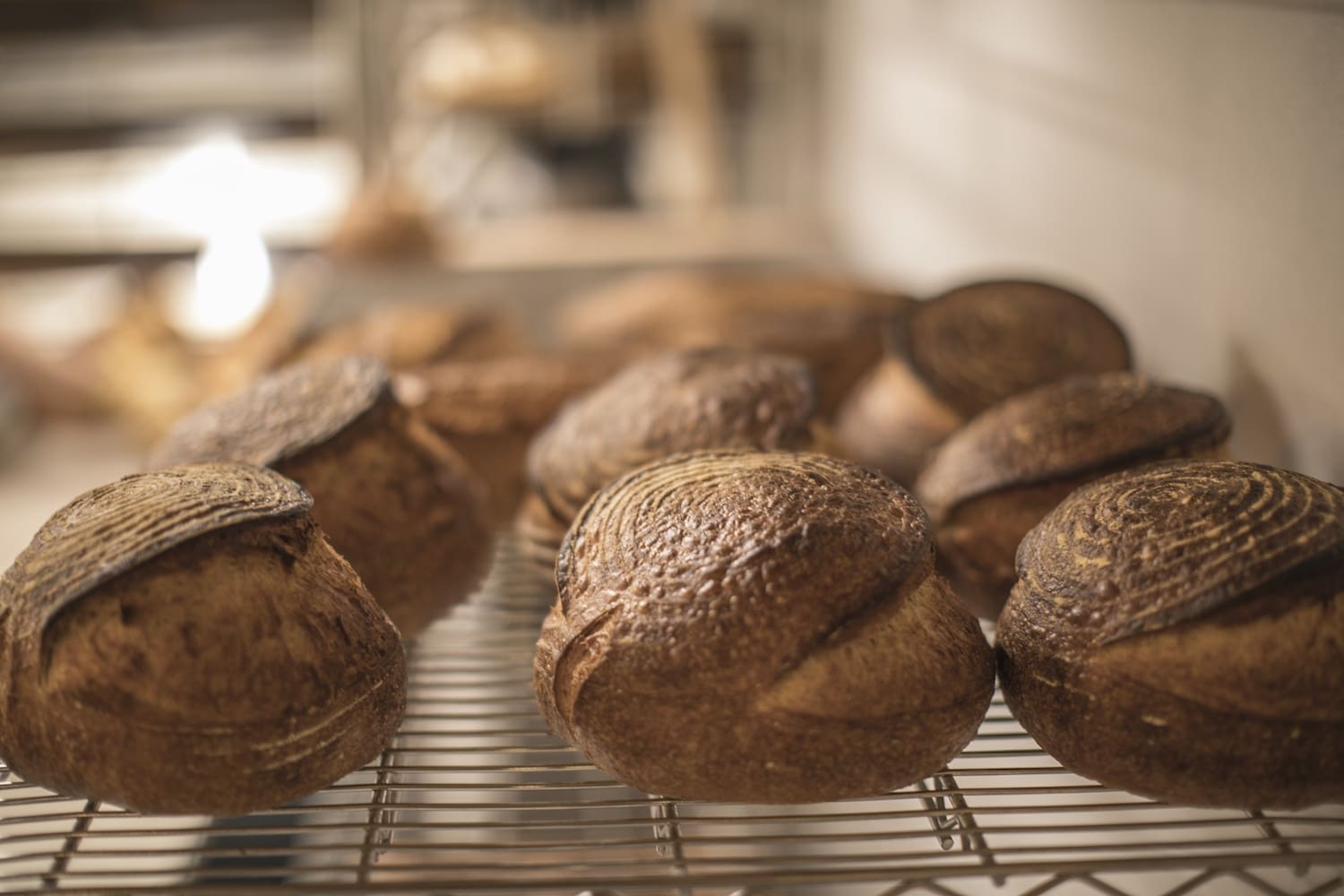 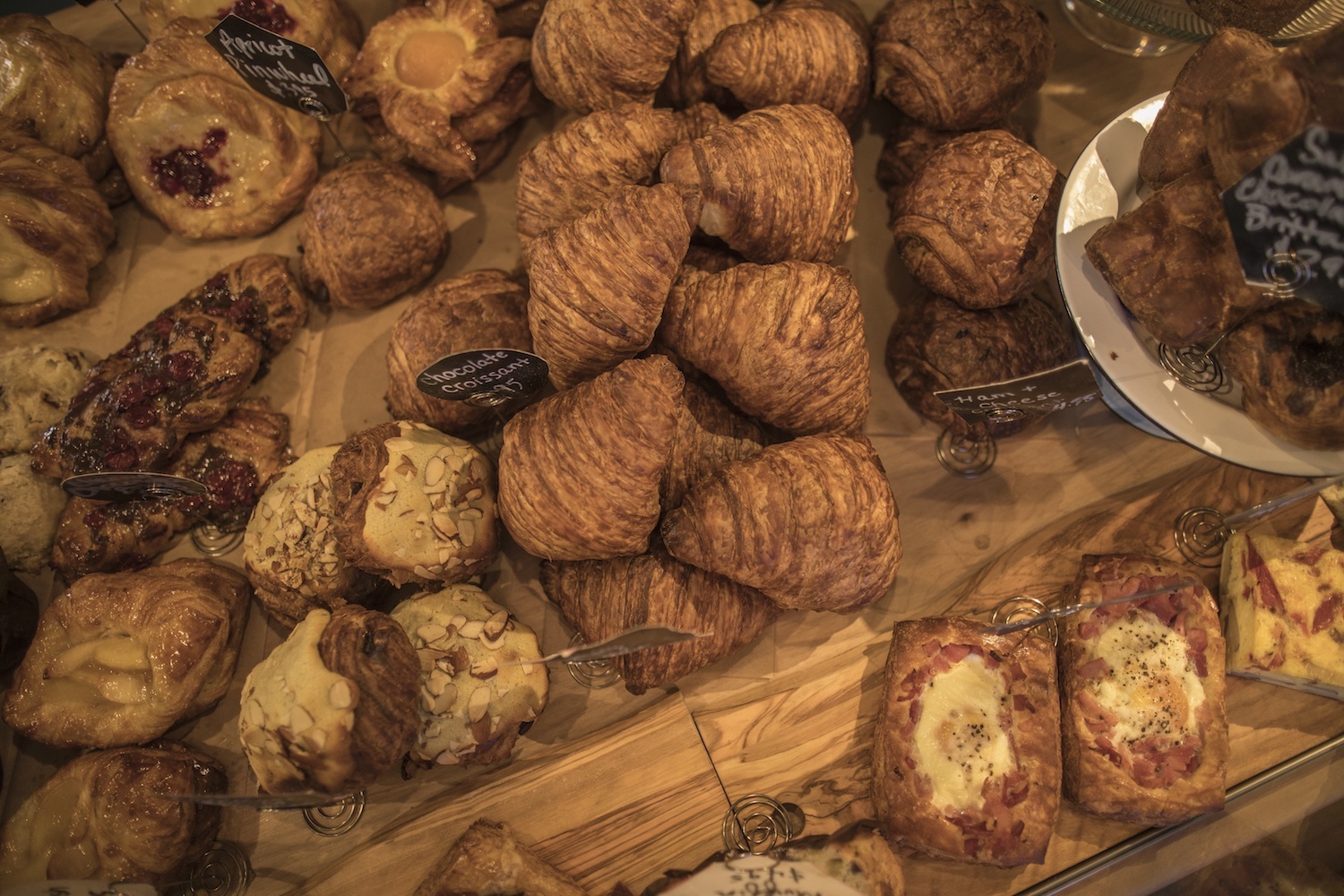 If the oven bellows and hisses when kids are in the store, Gollan teases that he’s keeping watch on a dragon in the back. It’s kind of true. Gollan, along with sous chef Kait Kelly, arrives at 1 a.m. to feed the beast up to 200 pounds of dough per hour. They make all the table bread for The Cooks’ House. They bake and deliver the ciabatta rolls and brioche buns Rare Bird Brewpub uses for sandwiches and burgers. The direct-to-restaurant business is the perfect balance, says Gollan, to the model he and his wife, Linda, a hospice nurse, wanted for their bakery from the start. A corner place focused on the surrounding neighborhoods. They bake to build community, in person, making sure the people of Traverse City have incredible bread to mop up their stews and to transform everyday breakfast toast into an event.

This morning, still before 7 a.m., three bread club members, lovingly called “bread heads,” pop in for their weekly loaf. Members buy yearly or half-year shares and select a day to pick up their bread. “It’s like a CSA, only crustier,” Gollan deadpans. “For me, bread club is beyond just selling bread. What I really want is for it to be a part of the community.” 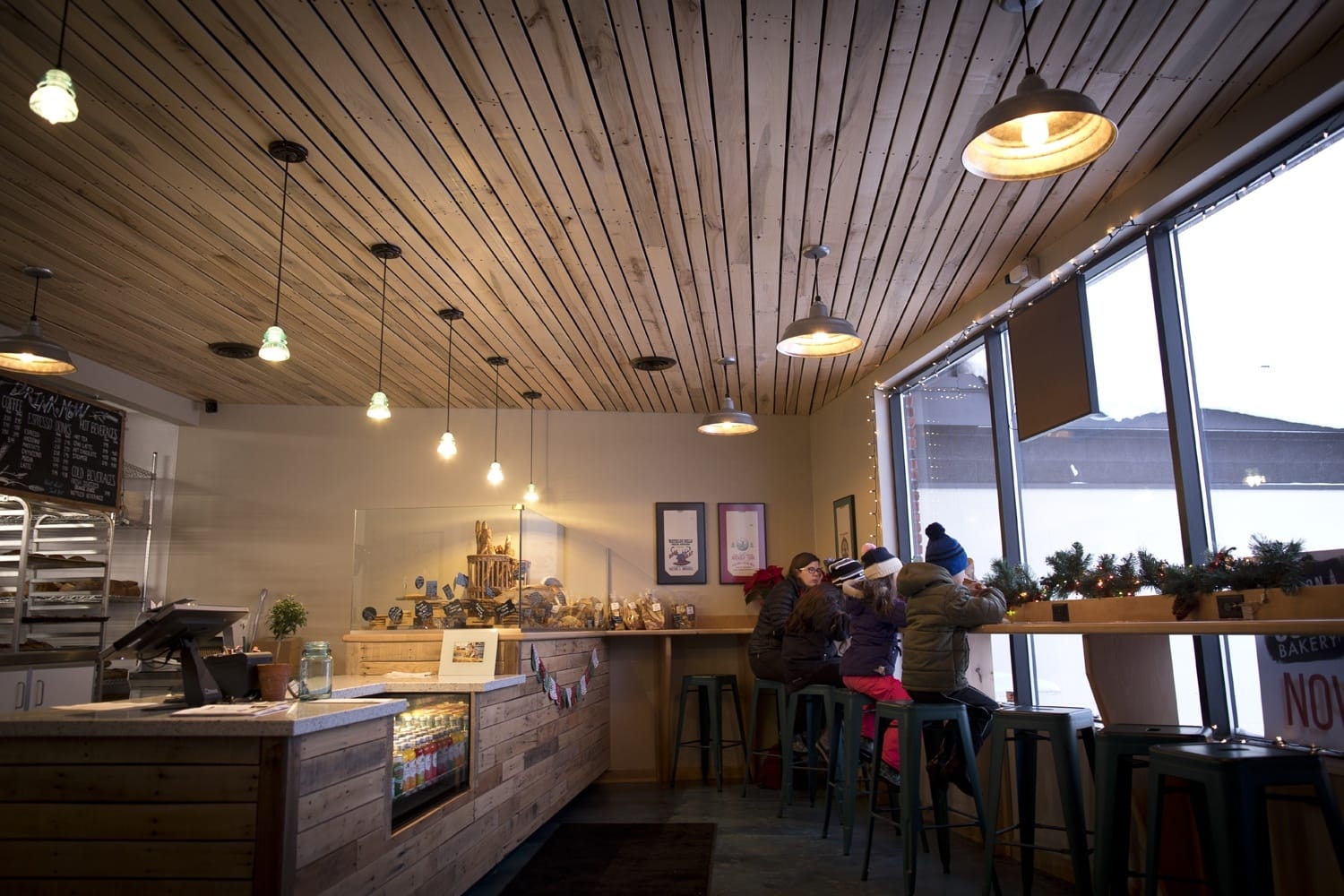 The bakery recently invited all bread club members and their families to a tent party in Common Good’s alley, serving punch and homemade Roman-style pizza. “Our mission is to make Traverse City a better place in every aspect. We live in a world that’s full of cynicism and fear, and that’s not going away, so why not focus more on hanging out and getting to know each other. That’s the real reason we’re doing it.”

Indeed. And, deep down, Gollan bakes because he’s made to be a baker. “I’ve worked in some great kitchens. I spent 10 years in kitchens, cooking. The pace of that, the yelling, the culture … wasn’t my personality. You know? You have to be who you are.”

He likes baking because it’s essentially the same every day, but he gets to play inside of that. “If you are always working on how you can improve things … then I think you are doing ok.” 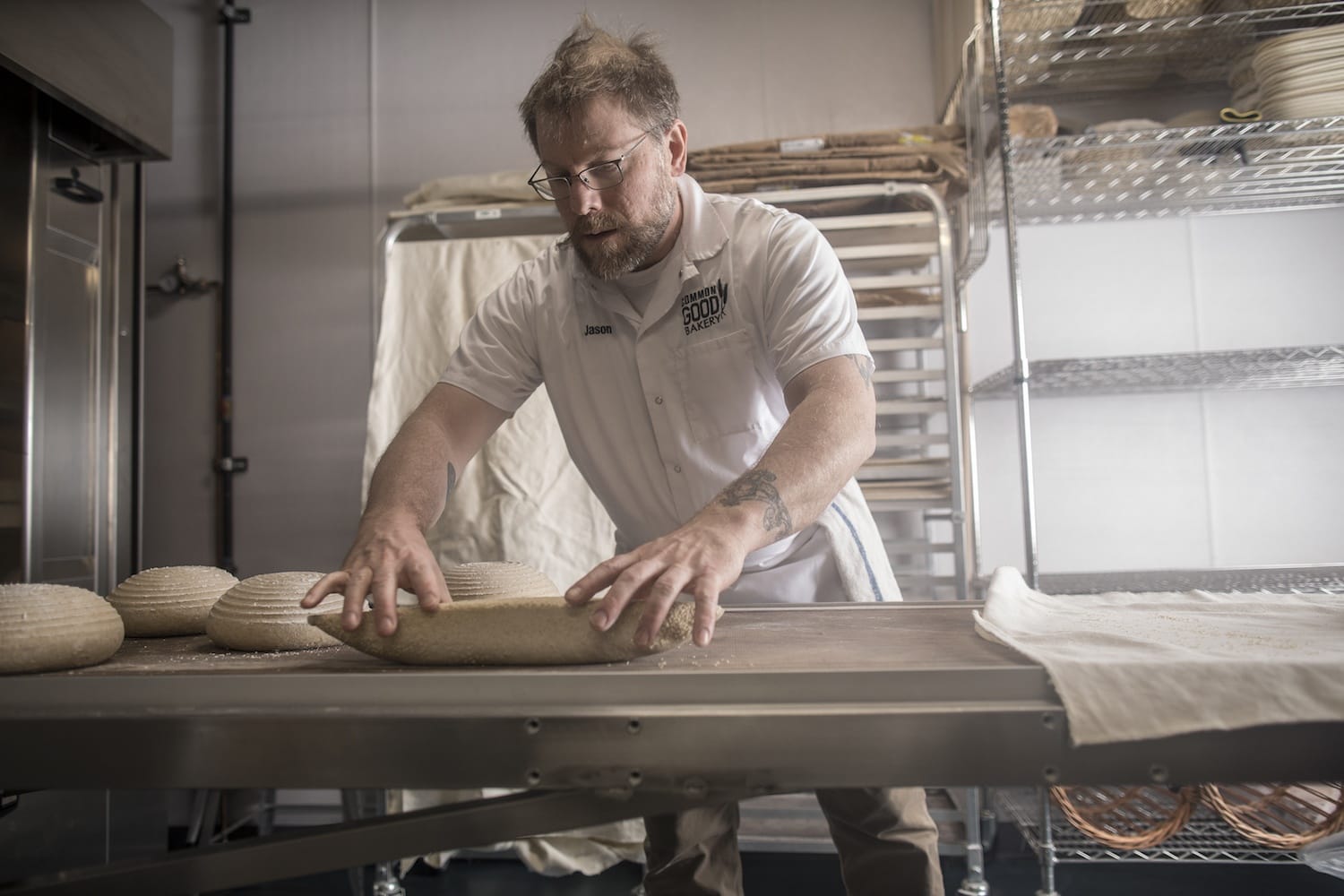 In Gollan’s quiet quest for continuous improvement, Common Good’s bread and pastries just keep getting better. The ethereal crumb of the croissants came from nailing the proof time. He and his team spent a week working out a combo of precise scoring and steam to get the trademark “ears” on the country loaf. He holds a loaf by the ear. “If you can do that … ,” hooking his fingers on the tawny ridge jutting irresistibly from the top of the loaf and trailing off. When asked if that makes him happy, he says no. “But you’ve done your job as a baker.”

“Day to day, I do everything in the same order. That allows me to work on the nuance of everything, including how efficient my movements are and other things that don’t matter to anyone else,” he smiles.

Back to the pastry counter: A man, on his morning commute, picks out an apricot Danish. Based on the twinkle in his eye as he carries the bakery bag with a scratch-made gift inside to his warm car, those things do matter to this guy.

Common Good Bakery is open Tuesday through Saturday in winter from 6 a.m. to 3 p.m. Visit the shop at 537 W. Fourteenth St. 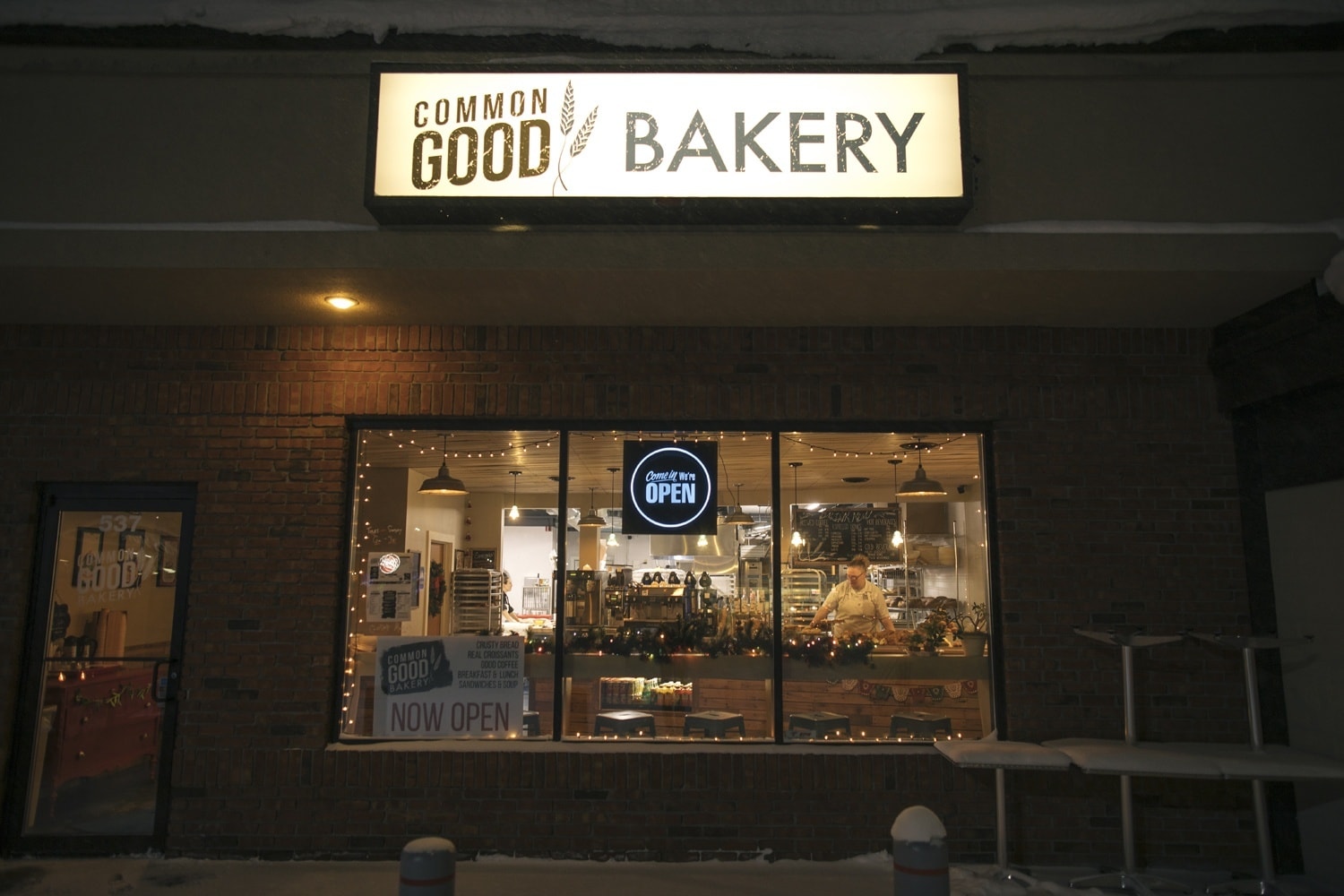 Gollan takes the “common good” part of his bakery name seriously. He teams up with The Little Fleet and chef friends from local restaurants including Raduno, Betty’s Hot Dish, The Cooks’ House, S2S Sugar 2 Salt, Press On Juice and Harvest TC, for a free community meal that supports local charities. Local chefs donate soup. Gollan donates bread. You come eat soup and donate what you can to the charity selected each month. “Soup & Bread” night is at The Little Fleet, 6–8 p.m. the second Monday of the month through the winter.