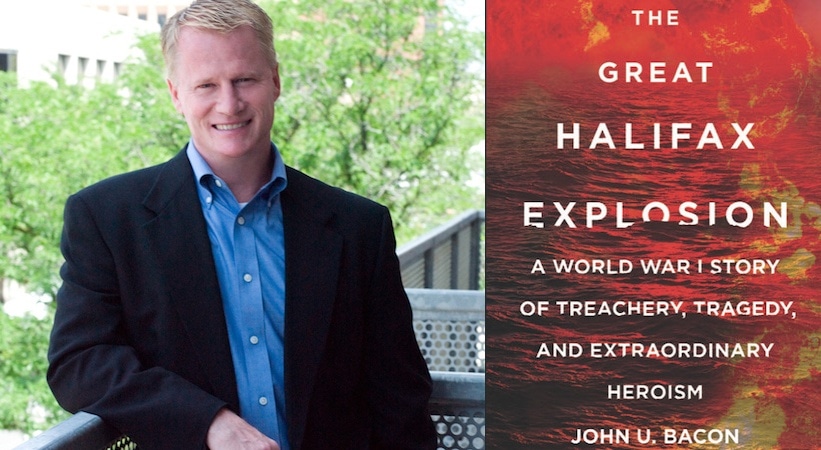 John Bacon is an award-winning author, public speaker and college instructor, holding undergraduate and graduate degrees from the University of Michigan. Bacon began his journalism career as a Sunday sports feature writer for The Detroit News in the early ‘90s before moving on to freelance for 12 international publications. He is the author of six national bestsellers, including Bo’s Lasting Lessons: The Legendary Coach Teaches the Timeless Fundamentals of Leadership (2007), Endzone: The Rise, Fall, and Return of Michigan Football (2015), and as of 2017, The Great Halifax Explosion, which he’ll discuss this Thursday at the City Opera House in Traverse City.

Ensconced in nearly four consecutive years of bone-weary battle by 1917, World War I Allies launched an ambitious attempt to gain the upper hand by sending nearly 3,000 tons of highly explosive munitions into the trenches of France. On December 1, the French freighter Mont Blanc launched from safe harbor in Brooklyn, and set its course for Halifax, Nova Scotia. Catastrophe, however, was unavoidable. Just as the Mont Blanc snuck into the Narrows of the Halifax Harbour, a Belgian relief ship, the SS Imo, was making its exit. On 8:45 a.m. on December 6, 1917, Imo collided with the bow of the Mont Blanc, upsetting gallons of diesel fuel and engulfing the upper decks of the Mont Blanc in flames.

At 9:04 a.m., not 20 minutes after the initial impact, the Mont Blanc erupted with a force equivalent to 2.9 tons of TNT, leveling everything within a 2.5 square mile radius. The casualties were staggering: nearly 2,000 lives lost in an instant and another 9,000 wounded.

Perhaps even more staggering was the impact the explosion would have on America. The blast would transform the trajectory of pediatric medicine, repair diplomatic relations between the U.S. and Canada and become the scientific inspiration for J. Robert Oppenheimer, who would study Halifax closely in his development of the atomic bomb nearly 30 years later. The Great Halifax Explosion is one of the most dramatic events in recent American history. In his aptly-named 2017 account, award-winning author John U. Bacon skillfully reconstructs the carelessness that lead to tragedy and the response efforts that saved thousands, all through the lens of America’s first “weapon of mass destruction.”

Bacon, a renowned sports, business and history writer and celebrated sports commentator, began writing in the summer of 1984. “One summer night before my junior year in college, I came home from a party and, for reasons I’ll never know, pulled out my grandfather’s old Smith-Corona electric typewriter and started writing a story,” he says. “I did it again after the next party and kept it up the rest of the summer until I realized I wanted to write more than I wanted to chat up co-eds. This was serious.” Several entry-level jobs, a few Michigan grad school writing awards and one fateful encounter with the esteemed Al Young later, and Bacon was freelancing for national publications and drafting his first full-length book.

In comparison to some of his other publications, the crux of which comprise sports and business content, transitioning to historical fiction feels like a hard left. But for Bacon, it was a no-brainer. “I love writing about sports—the scenes, the characters, the conflicts over values—but I’ve always read and liked writing about other subjects. It’s a big world, after all.

“My grandfather was a 12-year-old boy living in nearby New Brunswick, Canada, when the Mont Blanc blew up. He told me stories about this when I was a kid, but I’d never heard about it anywhere else until I started researching my first book, Blue Ice: The Story of Michigan Hockey 20 years ago.”

That’s when he met the son of Joseph Barss. Joseph Barss [Sr.] was the founder of the Michigan hockey program in 1923, and also a first responder at the explosion in Halifax. “Simply because the elder Barss knew basic first aid, at a time when any help at all was crucial, he found himself performing surgeries on patients without anesthesia, and he did it for three days with almost no sleep before he was relieved by doctors from Boston,” Bacon says. “A little research and we got a good chapter out of the Halifax Explosion in my first book, Blue Ice, but I always wanted to write a book just about that.”

But with an undertaking as encompassing as something like Halifax, Bacon warns against the ease of getting caught up in the research. “Controlled chaos is about the best you can hope for,” he says. “Naturally, you start with the research, but you have to be careful not to let that consume the whole process. In this case, I subscribe to David McCullough’s theory. When you’ve finished about half your research, you should start writing, and simply fill in the holes in your writing from there as you discover them. Otherwise, the research will never end.”

The author of 10 books and a six-time national bestseller, Bacon is no stranger to the writing rut. The key to combating it? “Let your first draft stink,” he says. “First drafts always stink. Just get to the end of it as fast as you can, then see where your draft is weak, and make it better. And keep doing that. By the time I finished Halifax, I had written 15 drafts, which is not unusual. And the biggest key is simple, but difficult: turn off the internet.”

Even more important to success in professional writing is resolve, Bacon says. “Don’t let anyone talk you out of it. If you love to write, nothing else can really scratch that itch. It’s worth all the rejections, all the headaches, and all the obstacles. It’s ultimately a lot of fun, and very satisfying.”

As Al Young reminded the young Bacon some 30 years ago: “Don’t want to write. Need to write. Think about it.” Adds Bacon, “Of course, one of the most enjoyable parts of the process is telling your latest tale to a crowd of folks who love a good story, so I hope to see you all at the Opera House on Thursday!”

Anna Faller is a freelance writer based in Traverse City, Michigan. She can be reached at afaller@umich.edu.