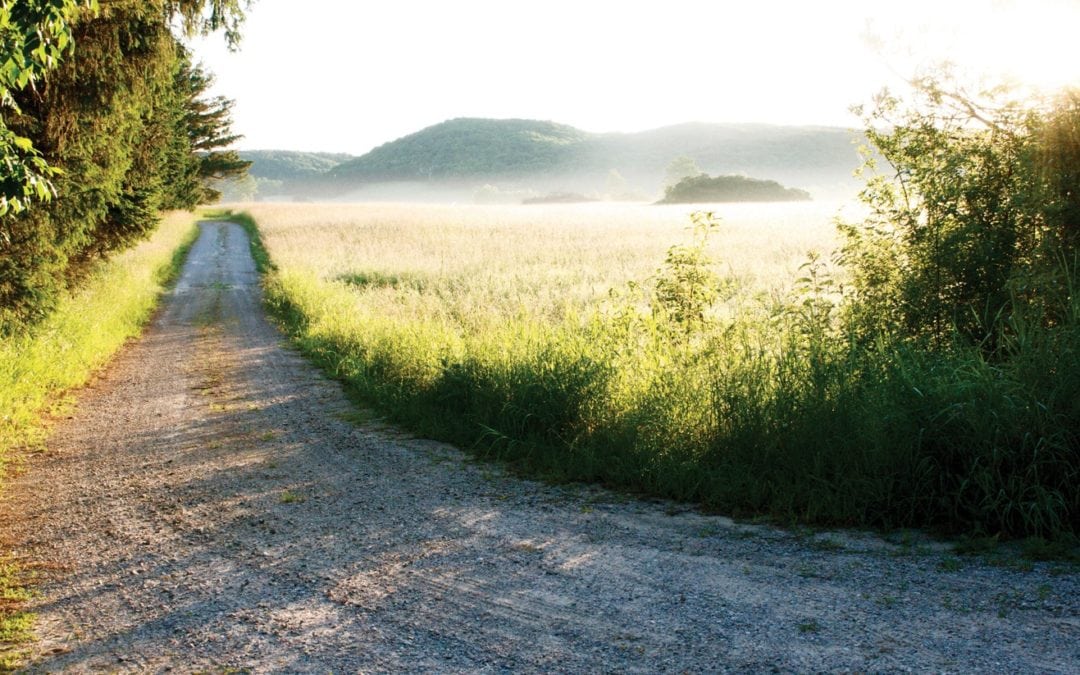 A walk down a bumpy dirt road to the mailbox became so much more than a chore; it was a moment to connect with family.

Our mailbox is at the end of our dirt road, a half-mile from our house. We gave this nary a thought on that sleety November day when we moved our family—two-and-a-half-year-old Ben, one-week-old Peter and our aging dog, Sara—into our little spot on the lake. But we’d never lived with a mailbox farther away than the end of our drive and we quickly found the distance disconcerting. We added coordinating who would get the mail to our hectic daily schedule, lest it be discovered we’d forgotten it just as we’d settled in for a winter evening. On occasion we’d forget. Sometimes we’d leave it, but that was surprisingly hard to do.

As we got settled and Peter grew heartier, I began bundling the boys onto the sled for a trip up the plowed road to get the mail. It’s a beautiful walk. A handful of houses are tucked behind curtains of cedar and poplar. Three streams flow under the road at different points and animal tracks abound.

We’d usually set off on our outing in high spirits, Ben marching along in his tri-colored snow boots, Sara making half-hearted attempts to follow a rabbit scent. If we were lucky, Peter would actually doze.

But a mile round-trip was about a half-mile too long, especially at a snow-suited toddler’s pace. Shortly after starting the return leg, the baby would no longer be dozing or cooing or even whimpering. He’d be screaming. Opting for speed, I’d load Ben back into the sled against his will. To keep him from crying, I’d give him the mail to carry. And then Sara would turn her wise, tired eyes at me, sit down and not move. “Just let me catch my breath a minute,” she would have said if she could. The baby crying, my poor old dog resting and Ben “reading” and then dispensing Newsweek, L.L. Bean catalogs and utility bills into the slush and snow. It was never quite the walk down the lane I’d pictured.

The box still stands as a sentry marking the end of what our four kids call our “bumpy” road and the beginning of the paved, county road. Through sun, rain, sleet and snow we’ve made our way to the mail on foot, skis, snowshoes, bikes and wagons. A favorite stop: the abandoned pontoon boat the boys named “Our friend the old boat.” Such adventures we’ve had upon that boat, mostly visiting grandmas and grandpas.

Sometimes our walks would be raucous fun, with the trip going by in a wink. Sometimes it took forever, when they’d fight over who carried the mail or whine that they simply couldn’t make it back without food or water. And sometimes, in the evening light or the heat of the day, they’d be quiet, reflective, content to hang close and share a story or a secret or maybe just the sound of the wind in the trees. The trip to the box continued to be a family affair—until the summer when, for the first time, the kids started going on their own. A few times a week, a rag-tag group of siblings and friends set off to get the mail, walking our much-loved dog, Foxy. I was hesitant the first time I let them head off, reviewing carefully the procedure for crossing the “busy” road to the mailbox. Assuring me that they understood the protocol completely, off they went.

As they ran up the drive, I could still see them as toddlers bustling up the hill in front of me, giggling as I pretended I couldn’t keep up. And I could still feel Sara, now gone, bumping up against my leg every now and then so I’d stop walking and crouch down for a rest and a chance to scratch between her ears. I turned back toward the house reminding myself that this is a country version of a rite-of-passage—full of memories, full of promise.

And then, in relatively short order, back they came—running down the driveway at full speeds, faces hot and flushed. Foxy, a herder who likes nothing better than to run, was in the thick of it, eyes dancing, tongue wagging. Stories were told to me hurriedly through smiles, as pieces of mail were thrust in my direction out of sweaty hands that were still so small. And then, just as suddenly, they were off to the lake.

I recall clearly the first time they actually convinced me to let them take their then-21-month-old sister Olivia along—only as far as the last bend in the road so she wouldn’t be near the traffic. She was beside herself with joy and sat perched in her stroller, ready for anything. Of course, she refused to stay in her stroller, wanted to swim in the streams along the way and generally gave them all a run for their money. Needless to say, her trips to the mailbox were with me along for a while longer. So were lots of theirs.

And that suited me just fine.

Deb Fellows is the founder and editor-in-chief of Traverse, Northern Michigan’s Magazine. Subscribe and never miss a column—and share each issue with the friends and family that you’d like to walk with to the mailbox.