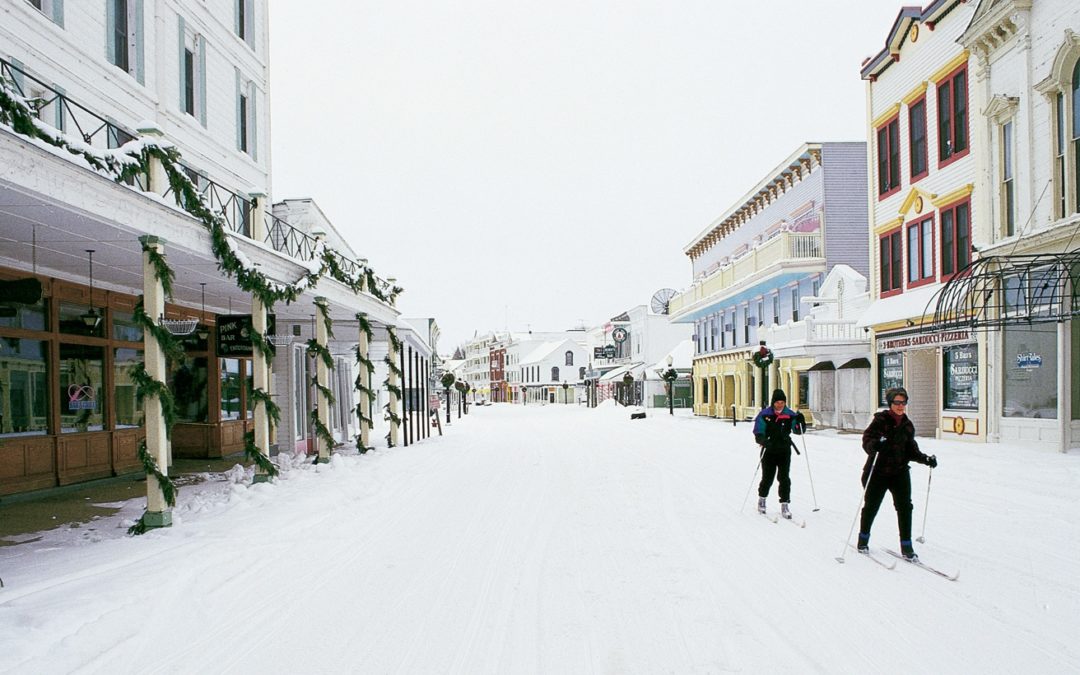 The midnight “ball” drop might be a glowing cherry dropped 115 feet (in Traverse City) or a massive turtle (on Mackinac Island). But more than the countdown, a festive atmosphere draws you to these New Year’s Eve events in Northern Michigan.

Mackinac Island’s anti-party has perhaps counter-intuitively become one of the state’s hottest tickets, says Bart Berkshire at the Lilac Tree Suites and Spa. Otherwise closed for the winter, the hotel opens for the weekend, and it generally sells out for the next year shortly after the clock strikes midnight. There’s a special magic to having the snow-cloaked island mostly to yourselves, he says, and once a couple or family visits, they seem to make it a tradition, he says. Just a few restaurants open, and mingling locals and visitors become fast friends. Most guests round out the weekend with outings on silent ski trails or sledding hills and take a trek on a horse-drawn carriage. Then there’s the low-key but well-cheered drop: a large stuffed turtle wrapped in lights, lowered from the Lilac Tree roof, complete with anticipatory countdown.

Book a room at the Weathervane Terrace Inn and Suites, so on New Year’s Eve day you can take a short walk to the town’s drawbridge—this party’s centerpiece. Some years, a replica drawbridge is lowered from the real thing; this year, the actual bridge will be lowered to the timing of the count. The planning committee has early birds and young families in mind with fireworks displays at both 9 p.m. and midnight. Fun starts in the early afternoon with s’mores around bonfires at East Park, a free family movie, and the snowman building contest—try to best the reigning champion snow-shark. Round out the fun with bridge-drop specials at local restaurants or a fat tire bike trip (get your rentals at Revolution Bikes) on the woodsy (also good for walking and snowshoeing) trails of Mt. McSauba.

This Great Lakes shoreline town does New Year’s right. Ludington boasts an outdoor tent area that, come mid-evening, turns party central. The beer tasting, live music and dancing are all in the center of this town, leading up to midnight fireworks and the drop of a particularly fiery ball decked out with 6,000 LED lights. This year, the ball drop celebrates 10 years, so expect a big bash. Want to start the day right? Sign up for the #RunLudington New Year’s Resolution 5K Run.

In Marquette, twinkly lights line trees near the Masonic Building, and crowds gather for the ball drop from the top. (This year marks the 30th anniversary of the event!) Toast the new year and the city’s creative microbrew scene with an Ore Dock Glad Tidings (made from ingredients found in Victorian England) or Blackrocks Nordsky Sessions IPA. The U.P. town was recently named top small town for adventure by USA Today, so plan on spending some time on the trails or at Marquette Mountain.

What better way to ring in the New Year than dancing in the streets? Thousands gather for the CherryT Ball Drop on Front Street. A live DJ keeps you moving until the bright-red cherry is dropped 115 feet at midnight. The non-profit organization raises money and collects non-perishable food items while people party for a purpose. Book a room at the Park Place to be in the middle of the action.