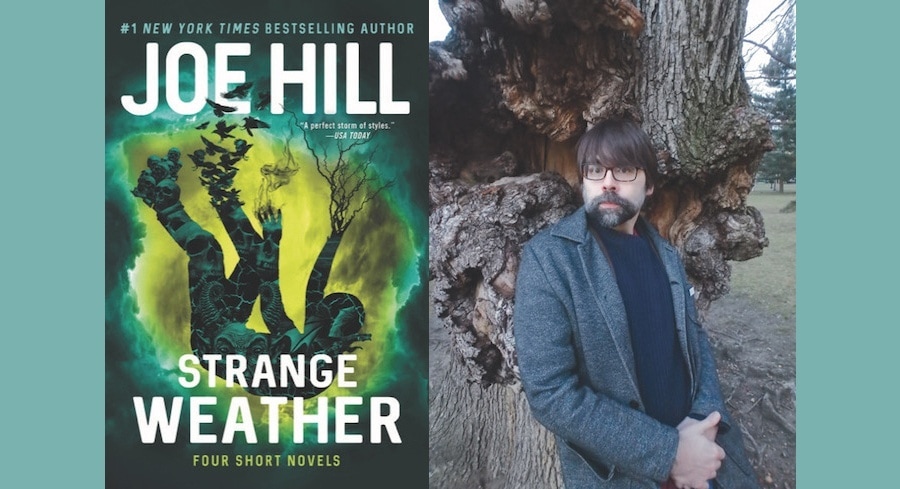 Joe Hill is the #1 New York Times best-selling author of The Fireman, NOS4A2, Heart-Shaped Box and Horns. The son of legendary author Stephen King, Hill has made his own mark as one of today’s best horror writers.

Joe Hill’s future as a writer of horror was sealed at the tender age of nine. That was the year he joined his father, the notorious Stephen King, in the very first installment of Creepshow, a horror comedy trilogy directed by Grand Guignol heavyweight George A. Romero. Though the role was small, the impact was anything but.

According to Hill, he spent most of his free time on set tailing the iconic Tom Savini, a special-effects makeup master and zombie maestro in Dawn of the Dead. “I thought Savini was awesomely cool in his black leather jacket and black motorcycle boots,” Hill says. “I loved watching him artistically disfigure movie stars and sculpt monster claws. By the time I left, I knew what I wanted to do with my life: I wanted to slaughter as many fictional characters as possible, and craft a few unforgettable monsters. Which is what I actually wound up doing. But because I had clumsy hands and no gift for sculpting, I had to do it with words.”

By the time he turned 13, Hill was writing every day. At 14, he had finished his first book, a horror novel entitled Midnight Eats wherein elderly cafeteria ladies turned rude students into hamburger patties. “Basically a splatter film on the page.” Though that first book never quite made it to the publisher’s desk, the damage was irrevocably done. Since then, Hill has carved out a reputation as a veritable horror master in his own right.

In his most recent release, Strange Weather, Hill combines four short novels in a single, spine-chilling volume. They were written over the course of about three years, he says, beginning with Snapshot, which actually intersected the tour for his third novel, NOS4A2 (2013) and ending with Rain, which he wrote during the 2016 election. The novellas exist independently of each other and range in content from the oblivion that haunts a Silicon Valley adolescent in Snapshot to the “contents under pressure” sensibility of Loaded.

Strange Weather is far from Hill’s first time around the short story block, and it’s unlikely to be his last. His first full-length work and bestseller, 20th Century Ghosts (2005), is also a collection of mini-novels. For Hill, it’s the periodic change that keeps the monsters coming. “Farmers have understood the necessity of crop rotation for a long time now, and I think a similar principle is healthy for writers. I might write comics for a few months, then work on a novel, then bang out a short story. Working in one form seems to freshen up the soil for the next.”

In fact, Hill’s first big writing break was a comic strip. “I wrote four novels in my 20s [that] I was never able to sell. My big breakthrough was when a talent scout at Marvel Comics read one of my short stories and asked if I wanted to try my hand at writing for Spider-Man. I was a comic book writer before I was a novelist, and in some ways, I still think of myself as a comic book guy first. So many of my favorite writers worked in comics, Neil Gaiman and Alan Moore in particular. For me, comics are the easiest to write and the most fun.”

Still, novels remain the most satisfying for Hill. “They seem to have more staying power, at least for this reader.” But, he certainly isn’t shy about the prospect of mixing media. “I do think for stories of suspense, the short novel is an ideal length. You get the depth of characterization allowed by a novel, but you have the lean, mean, pedal-to-the-metal velocity of a short story.” If that’s the case, then Hill is a regular speed demon.

But this need-for-speed mentality doesn’t mean Hill can simply “bang out a novel.” Actually, he advises the opposite. “No one can write a novel in a day. Don’t even think about writing a short story in a day. Just sit down to write one good scene. Try and formulate one scene that would be exciting to read. And then do it again the next day. A novel is nothing more than a big stack of exciting scenes held together by a single narrative thread. A short story is maybe three exciting scenes.”

Hill maxes out at about 1,500 words a day. “I can live with a little less and am delighted to get a little more,” he says. “I think it’s healthiest to think in terms of individual scenes that would be a delight to read. You never need to write a scene where the hero wakes up and opens the fridge to figure out what he wants for breakfast—unless there’s a severed head in the fridge.”

It should come as no surprise that Hill’s earliest career influence was literature’s original “Master of Horror”—his dad. “If I fell in love with horror fiction at a young age, I come by it honestly,” he says. “Between the movies my dad and I watched together and the books he wrote (I lapped ’em up), there was really never a chance I was going to write like John Updike.”

We certainly aren’t complaining. Consequences and might-have-been sculpting career be damned, Hill has come a long way since his first thrasher novel. And if his nine-year-old-self read one of his books, he’d probably be reaching for the night-light.

Anna Faller is a freelance writer based in Traverse City, Michigan. She can be reached at afaller@umich.edu.