Muskie Fishing in Michigan’s U.P. is an Adventure You Won’t Forget We head to Michigan’s U.P. in search of the mythical muskellunge. The fickle, sharp-toothed creature is North America’s largest game fish. Once you’ve tried muskie fishing, there’s no going back.

This story is featured in the October 2018 issue of Traverse, Northern Michigan’s Magazine. Get your copy.

“What good,” Aldo Leopold once asked, “are 40 freedoms without a blank spot on the map?”

This was the very question my three friends and I set about discussing one summer some eight years ago while planning what was supposed to be a one-time October adventure. After two months of consultation with DeLorme Gazateers, Google Earth, internet message boards, ancient watershed reports and every half-hinted rumor we could collectively remember, we decided the place to let our collective freedoms fly was the Tahquamenon River in the Eastern Upper Peninsula. And, being fly anglers just a little tired of trout, we would funnel our liberties toward the pursuit of esox masquinongy: the muskellunge. Those readers unacquainted with the sport of muskie fishing are excused by reason of sanity. It takes more than a half-pint of madness to chase North America’s largest game fish. But it’s not the size of the quarry that makes the enterprise suspect. (Two full-grown adults could enjoy a comfortable lunch in our landing net, though.) It’s the extreme wariness of the pursued. A fallacious cliché declares the muskie the fish of 10,000 casts. Having fished them for nearly a decade, and being a talented counter with a graduate degree in fiction writing, I can assert the number is actually closer to infinity (several of my hardest-fishing friends have yet to bring a fish to hand).

But this elusiveness is not to suggest that not catching a muskie is the same as not seeing one. Far from it. Muskies are in fact among the most curious fish in the catalog, regularly tracking flies and lures back to the boat with a shark’s bulging wake. Seeing one is a fairly regular occurrence. It’s getting one to actually eat your offering that’s difficult—a curious challenge given muskies literally live to eat. To put things in perspective: take your greatest gourmand friend and imagine their second favorite hobby was staring at their food—chin on table, eyes wide—before walking away without having taken a bite or paid their bill. This inexplicable moodiness is what makes a muskie a muskie. Only once has every member of our party boated a muskie during a single trip. And despite a lack of sane accommodation (just a mess of tents and tarps stained by every form of tobacco ever invented) we persevere. Rapturously, in fact. Two years of muskie camp became four, four became six. One member moved to Atlanta, another to Minneapolis, but this has only made our yearly expeditions longer and more complex. Somehow, an outing born of a single wild hare has become—with apologies to our very admirable trout and turkey camps—not just a ritual, but the sporting ritual of the year. Parsing why this should be the case has become regular campfire practice. During especially rainy or fish-less trips the question dominates morning coffee as well. Easy answers are hard to come by.

Certainly, one reason muskie camp continues to exist against all odds is for the rare opportunity for transformative suffering—think pain of the most noble, beatific, Old Testament variety. The three of us have borne witness to all-night windstorms so furious the hammocks we slept in bucked and lurched with the trees till morning; frigid nights that froze our waders so stiff we had to ice-breaker our feet back in come morning; mosquitoes so large they shuddered in the trees like grouse; hands pulped to hamburger by the double burden of wet cork and wetter hand; casting shoulders with sworn oaths to stay impinged till the end of time; and so on. The following is a fact: if you do not believe in the redemptive power of pain, lay down thy fresh purchased muskie rod and get thee to a B&B. 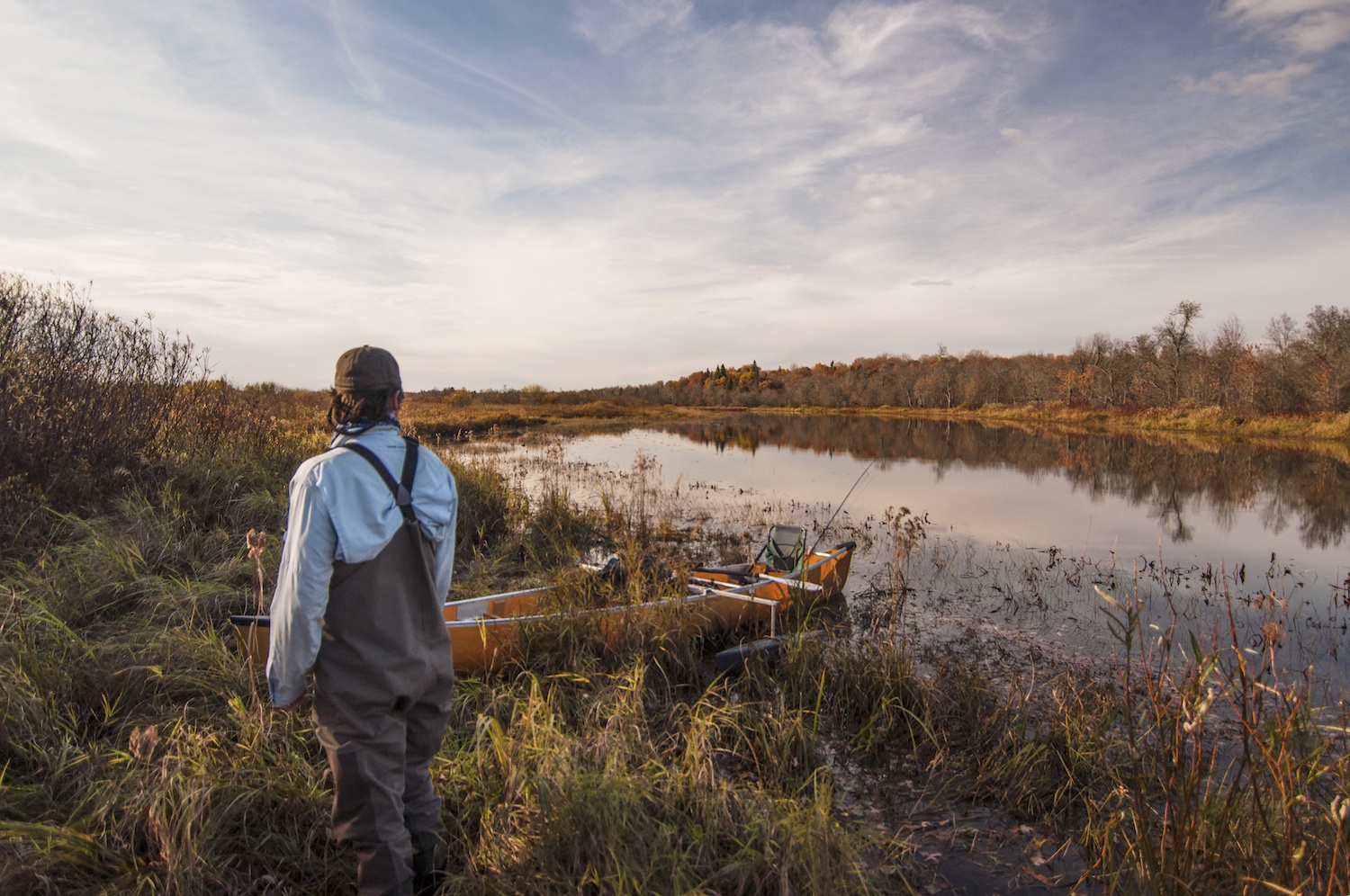 Then there is the beauty of the evening light on the Tahquamenon River in October, which when placed alongside the aforementioned hardships induces in the viewer an ecstatic sense of the sublime. It happens at least once a trip, usually while motoring back to camp in a biting evening wind, that you feel as if you’ve slipped through a cosmic gaping wormhole into another galaxy, and you are left struggling like a camera against its shutter to take it all in, all the same fluorescent colors you see in a street-artist’s spray-painted cosmos, but without any of the attendant nausea. Quite the opposite.

In fact, it was on the Tahquamenon that I had my most loving and generous thought ever about the Earth. In a far future when humans have established colonies on other spheres, I’d still sneak back to Earth every year. I’d think to myself, “You have to admit, even in the most cosmic scheme of things, it’s a beautiful place.” As if this beauty wasn’t enough, there’s also the fact that muskie camp reminds us the human body is a tool whose edges fade with time, but there are activities that provide fair compensation for the blunting. Catching a good muskie, I maintain, is one of them. Not that you’ll spend much time actually tethered to a fish, relatively speaking. 12, 20, and 72 are the respective seconds camp members spent embroiled in combat in the last calendar year. Spread out over a lifetime, these numbers suggest even the luckiest in our triad will be hard pressed to have broken the 10-minute mark by the time he makes his Final Cast.

But time, muskie fishing would argue, is not equal. Those heart-pounding moments when a shovel-headed beast appears just inches from your fly, or when a fire of belabored wet wood finally catches and springs starward, casting towering shadows over time spent assembling sandwiches, sitting in traffic and staring at screens.

Perhaps the most persuasive case for muskie camp’s longevity is for the faith it has instilled in us. The small world we live in—one well-circumscribed, fenced in, and concretized—will be transformed into a bigger place. Our souls will be restored to their original condition and most primeval shape—about four feet long and full of teeth. Dave Karczynski teaches writing and photography at the University of Michigan.