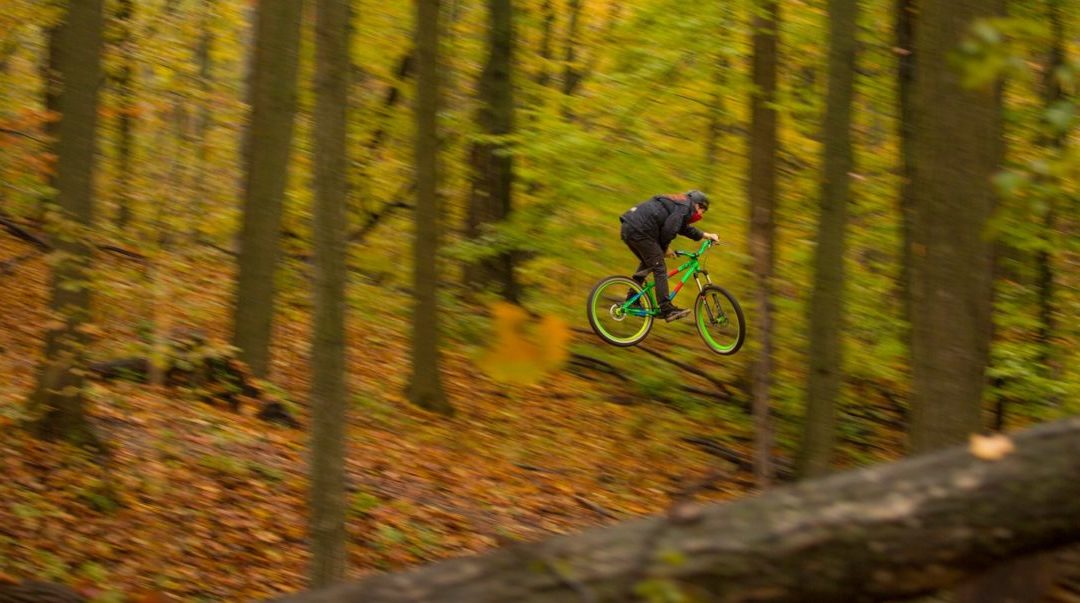 He came of age on the mountain bike trails at Grand Traverse Commons. Adventure photographer Erik Olsen tells how one rip down his hometown hill was all it took to get hooked.

This story was featured in the October 2018 issue of Traverse, Northern Michigan’s Magazine. Get your copy.

It was the ’90s. Times were simple, hair was in curtains, and certain sports started getting “extreme.” Cycling was no exception. Network giant ESPN was quick to host competitions that would push this concept into the stratosphere. The ESPN Extreme Games (this was before extreme was forced to sacrifice the “E”) were chock-full of strong characters like Hans “No Way” Rey and Missy “The Missile” Giovi splashed all over television. They were as outlandish as the bikes they rode.

Manufacturers were paying attention, trying to construct bikes that could keep up with the exhibitions of their athletes. I recall seeing a Muddy Fox Interactive for the first time, a bike forged of non-traditional shapes with odd fixtures, springs and mechanical bits bolted on in random places. The pilots of these contraptions would shield themselves in off-road motorcycle armor making them look more like gladiators, far removed from their cross-country counterparts. I am sure that all of this appears to be incoherent rambling—you are probably correct. However, as a youth just marrying myself to a sport, the teen angst within it certainly left a lasting impression on me, for better or worse. 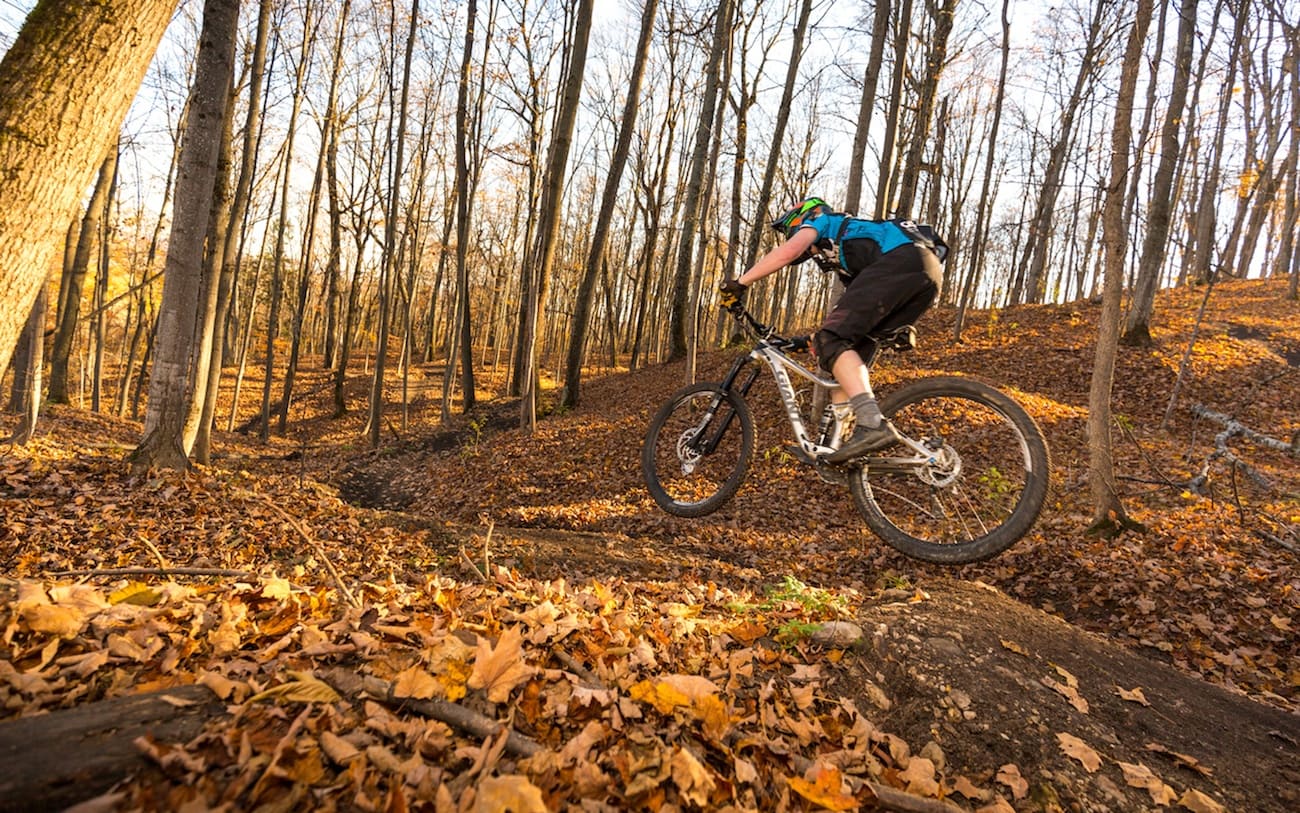 While home from college for the summer I was exploring in the woods behind the Traverse City State Hospital, trying to familiarize myself with the multitude of loops making up the trail system. After getting myself thoroughly lost, I entered into an area that seemed less tracked. I was tracing a trail that ended in a wooden structure; a ramp that did not touch the ground on the far end. Eureka! I had found the first of several very large wooden drop-jumps that could only mean one of two things: either I had found a portal that transported me to Vail Colorado and the mid-90’s downhill race scene, or someone had been inspired to create similar features here, right under my nose. We didn’t quite have “jurassic terrain” but someone was making the best of what we did have. And it was pretty scary looking.

The following day I was back with my burly ramp-riding helmet and a buddy. We rode everything we dared until we ran out of daylight. You couldn’t wipe the dirt or smiles from our faces. This was like realizing a dream. This place was amazing: beautifully sculpted features, trails utilizing the hillsides and carving left and right under the largest canopy of leaves imaginable. It inspired a sense of awe with a certain crafted beauty. It was quickly apparent that someone had been working hard constructing all of this. 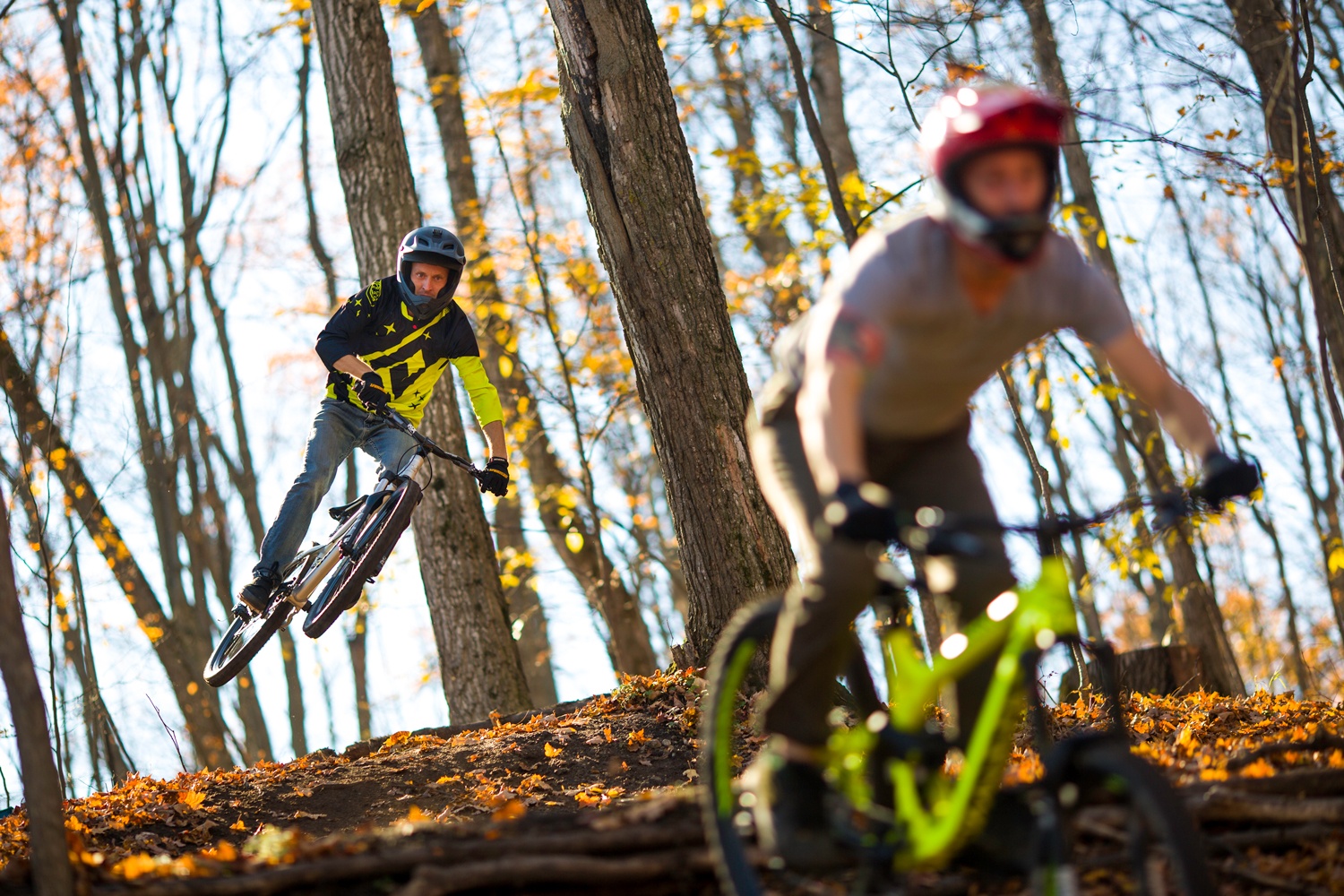 I set out day after day, any time I was free from work to try to dial in the trails, continuing to discover more. I was spending so much time up there that I started to run into other riders, many of them from all corners of Michigan. Stories were shared about how these paths were originally built as walking trails by patients at the State Hospital decades earlier. And the trails had names (there is no signage posted). “This is called Bucket Run. Someone found a rusty old bucket when they were cutting into the hillside.” “This trail is called Onion Run.” Why is it called onion run? “Wait until the wild leeks start to poke through the ground, you’ll know.”

There was a warmth to everyone I met at the trail system. On some weekends it was the oddest collection of people sharing a common interest and a common appreciation for something we all knew was special. 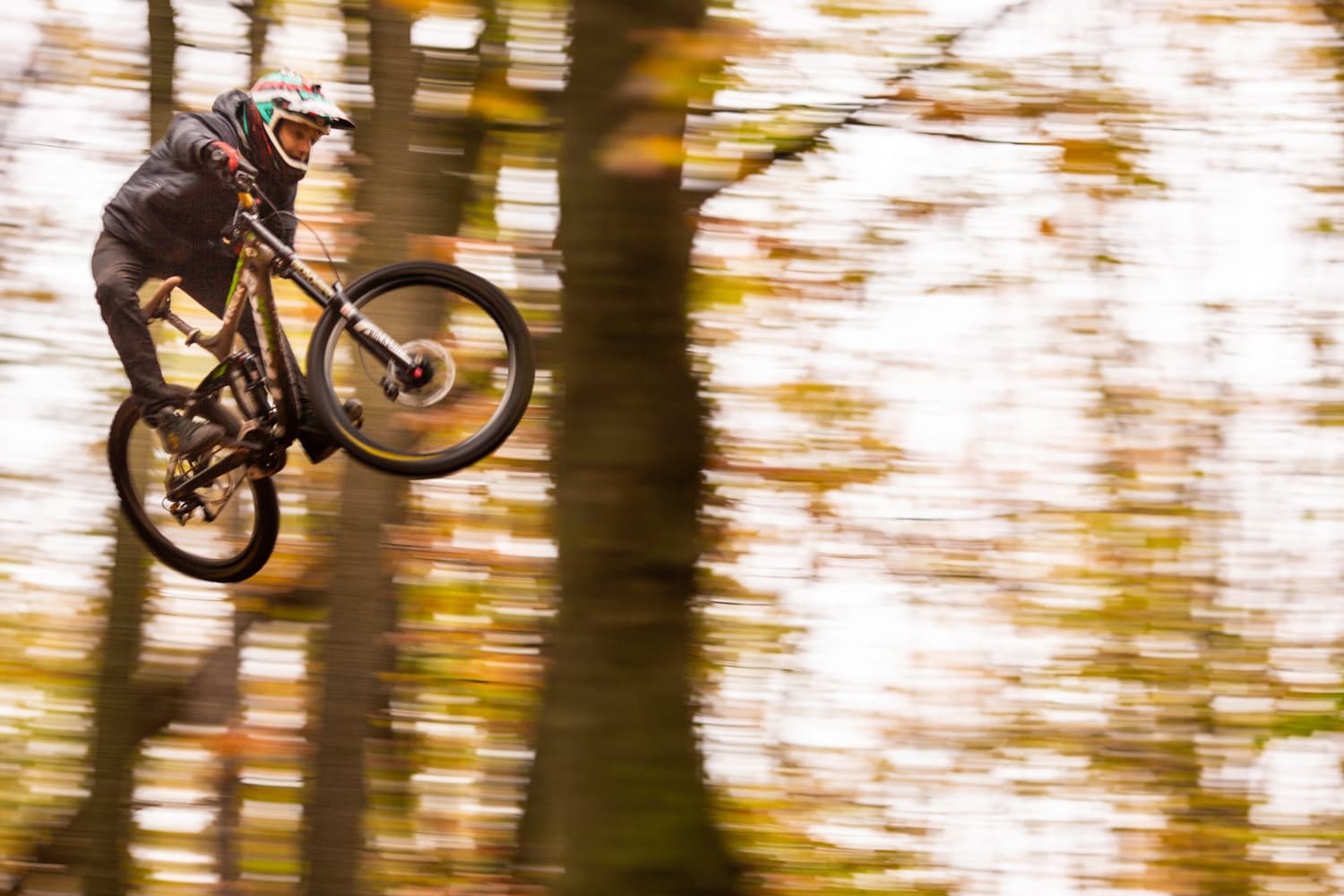 My almost suspension-less cross-country bike was starting to show signs of heavy use. It was clear it was holding me back. On a recommendation, I perused a local shop I knew as the source of most of my snowboard gear but in the summer was a skate shop and downhiller’s mecca. On my second visit, I walked away with my first NASA-inspired downhill rig. Within two weeks I was able to ride every feature on the grounds of the State Hospital with grace.

The end of summer was approaching when I caught word of The Bootleg. This culminating race event happens late into the fall. A race with character. Price of entry is one used bicycle part that functions. I pulled in to discover a parking lot filled with cars. New and old faces from all over Michigan. A surprisingly formal race setup existed in the woods and the race trails were manicured and cleaned of fall leaves. The racing heats went off without any real incidents to the adulation of cheering fans (yes, there was a crowd!) and other competitors alike. To my utter surprise, my name was called as the 3rd place finisher that year, meaning I was able to be the third person to rummage through the collection of used bike parts scattered in the bed of a pickup to collect my trophy. I was beyond hooked. 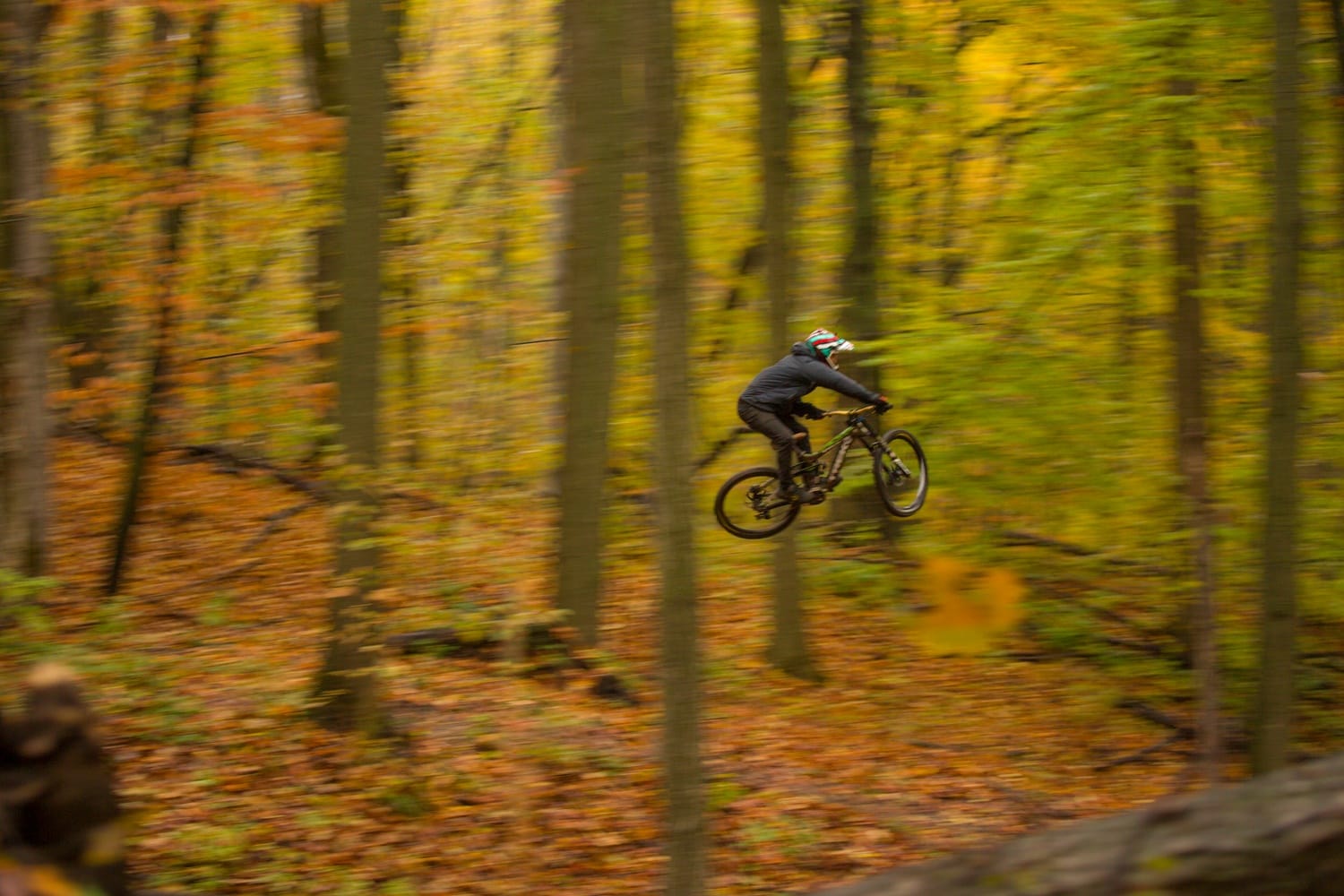 As school and life got more complex I became less of a fixture in the hills, but I still make it a point to go spend a lot of time up there. Last year I even raced the Bootleg again. Some of the faces have changed but there is still an old crew up there shepherding in the new crew. Come up and ride, come up and watch. Take part in a cleanup day or do some trail building. You will find an eclectic group of enthusiastic people from little grommets ripping around on fat bikes to teens on slack downhill bikes to retirees in spandex on 29ers. Everyone with dirt and smiles on their faces. 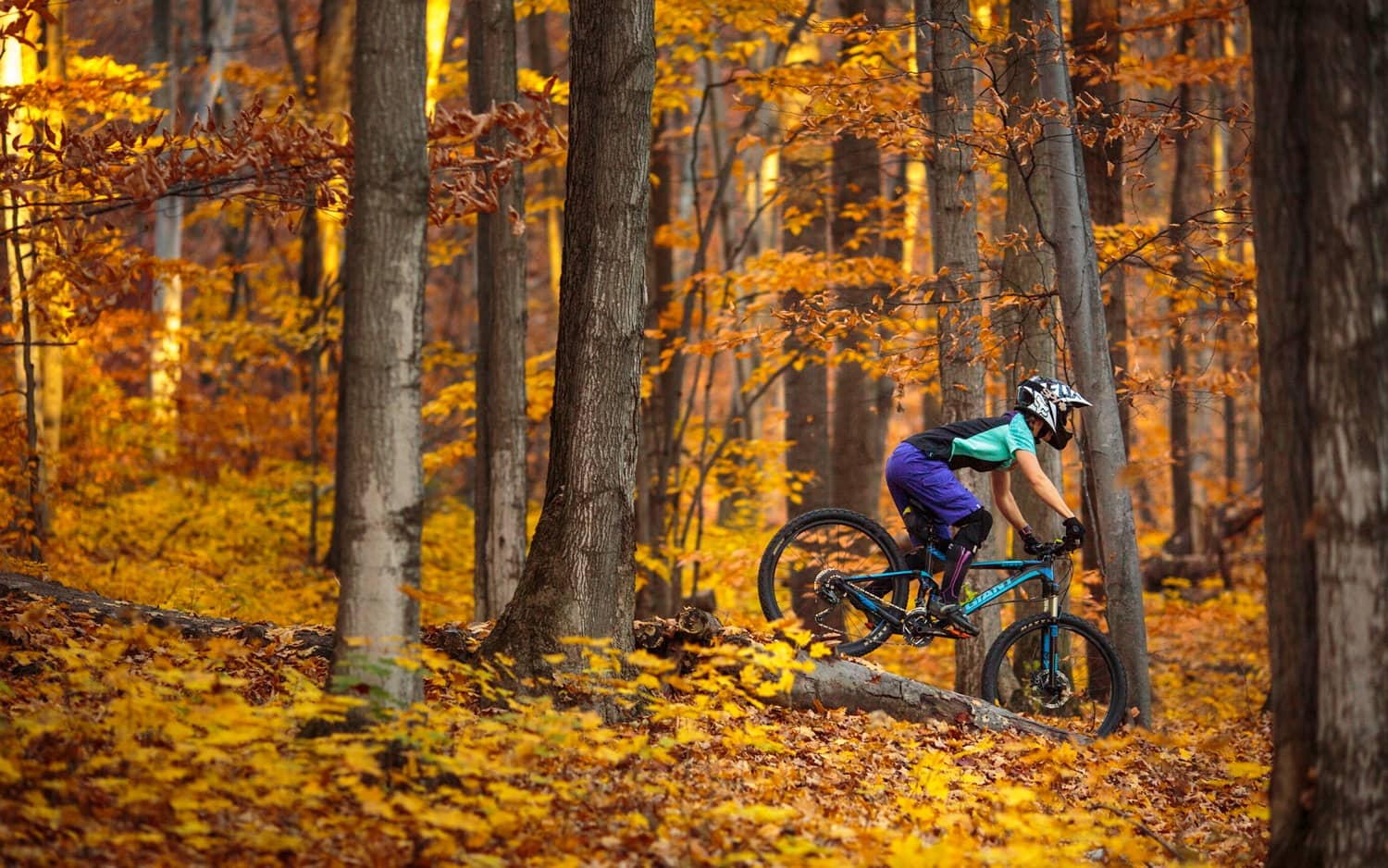 To get your mountain bike trek on track, make your way to Brick Wheels (736 E. 8th St., Traverse City). Knowledgeable staff will assist in picking out a ride for your needs and adjust it to your specific dimensions. For those who already have their own, Brick Wheels also boasts a full-service bike shop that can give your beloved bicycle a complete tune-up. Pick out a bike, and put in some leg work. Here are a few more tips for a thrill ride: