Smash burgers topped with hash browns and bacon. Breakfast nachos piled high with chorizo, pico de gallo and a sunny side up egg. A focaccia recipe that’s been perfected over the past two years. Bray and Brittney McCabe are upping the local brunch game in Traverse City at their pop-up restaurant Glendale Ave.

It started exactly a year ago—October 29, 2017. The McCabes had their first brunch at The Little Fleet. They hoped 40 people would show up. The final tally was 85. They sold out.

“I needed a creative outlet after a long summer,” Bray says. “The Little Fleet was doing monthly pop-up events. Different chefs came in each month to serve food five or six days a week, but no one ever did Sundays, so I asked if I could make breakfast sandwiches.” Chefs Jen Blakeslee and Eric Patterson of The Cooks’ House offered the use of their kitchen at Milkweed inside Little Fleet. “Which is crazy,” Brittney says, “because why would you trust us to do this? We didn’t have a menu or anything. We just knew we wanted to do a burger with an egg on it.”

And they knew they wanted to represent their hometown, Saginaw. Glendale Avenue is the street Bray grew up on, and everything on the menu pays homage to their roots. So what’s this smash burger?

“You get your griddle screaming hot, put a ball of meat on it and literally smash it so it gets this amazing crust,” Bray says. “The burger cooks really quickly and gives it awesome caramelization. Scrape it up off the pan so you get all that goodness, flip it over, throw some cheese on it. I’m passionate about smash burgers.”

What else are people loving on the menu? The Germania—loaded with pastrami, swiss and scrambled eggs—has developed a ride-or-die following. Hugo Sauce, named for the McCabe’s nine-year-old pug, is a spicy secret everyone needs in their life. And The Saginacho. “It’s nachos for breakfast,” Bray says. “I make my own nacho cheese sauce, throw a fried egg on top, crumble some bacon. They’re delicious.” 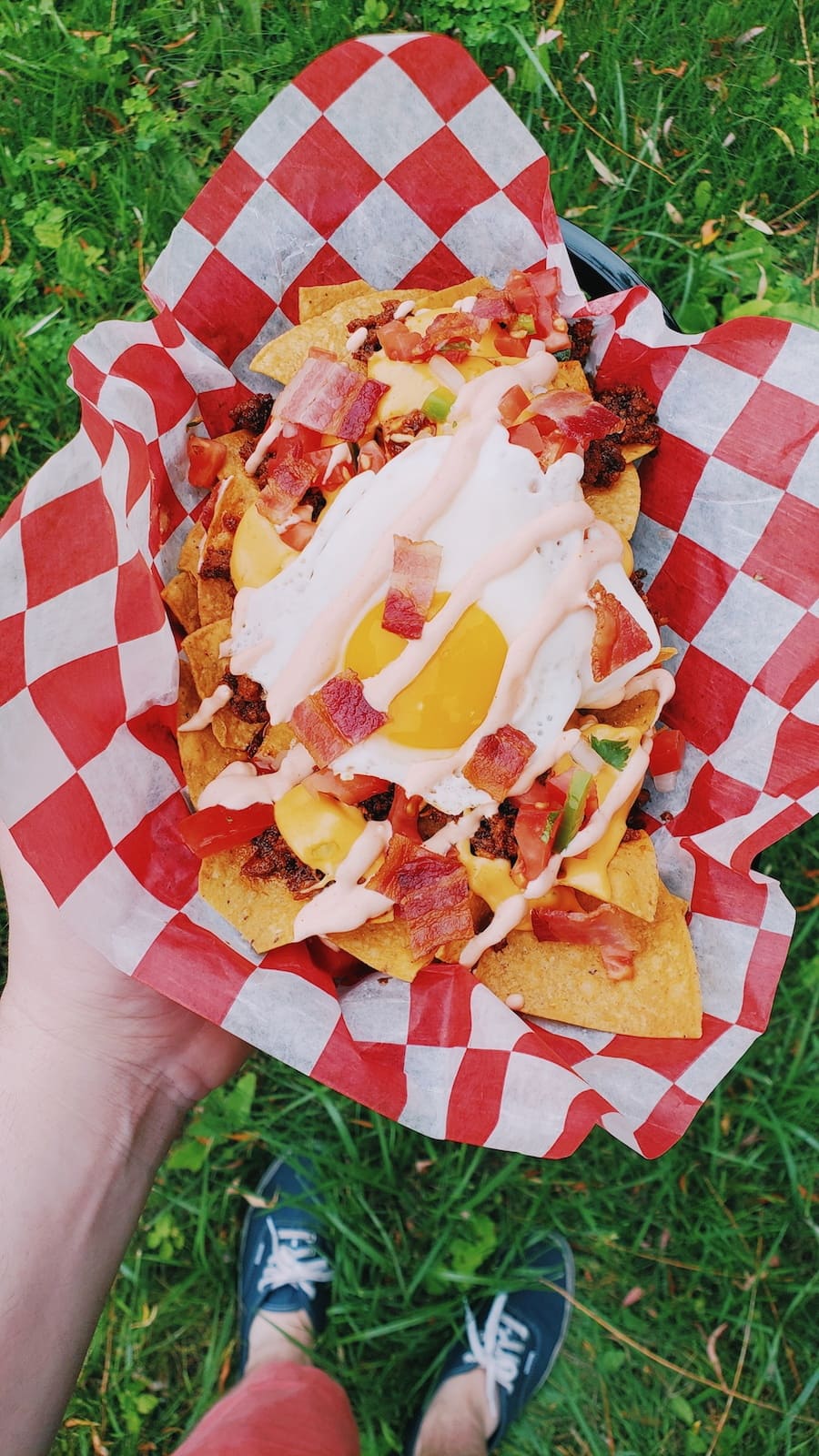 But the McCabes aren’t just serving brunch. On Wednesday nights find them at Mammoth Distilling from 6–9 p.m. “for the foreseeable future.” The double-fried, Korean-style buffalo wings are extra crispy. The crab rangoon, well, just look at the picture below. They’re incredible. Roasted sweet potato tacos have also made an appearance on the menu.

“We just lucked out,” Bray says. “Gary (Jonas) was nice enough to let us use his space at Little Fleet. Jen and Eric had heard good things about me but didn’t really know me. The owners of Mammoth gave us a chance. Everyone has been so nice.”

“We owe so much to Folgarelli’s,” Brittney adds. “We’ve used their equipment and space, and all our prep work is done in their kitchen. We couldn’t have done it without them.” Hangout with The McCabes

@Mammoth Distilling on Wednesdays from 6–9 p.m. 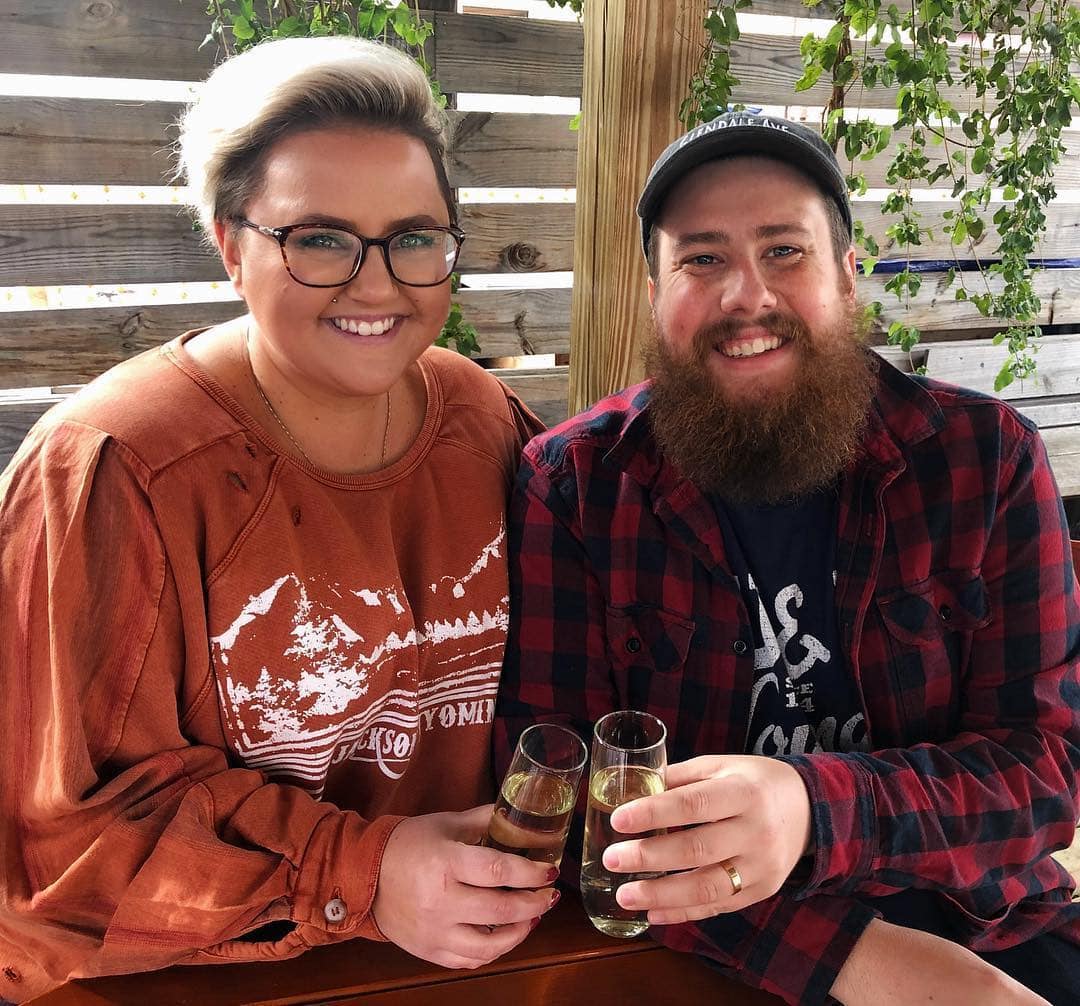 Seriously, how sweet are the McCabes. They’ve been together since they were 14 and just celebrated their two-year wedding anniversary. This is the story of how they met as told by Brittney and Bray …

Brittney: We went to different high schools. He went to Catholic school. I went to public. Our schools always had the same spring break. I knew who he was because I had a friend who went to his school. Thought he was so cute or whatever.

Bray: I was oblivious.

Brittney: So we went on spring break in Panama City Beach, Florida, which was the hotspot for Saginaw back in the day.

Bray: They used to send the Saginaw newspaper there for two weeks.

Brittney: It was the first season of The O.C., so it was very exciting. I missed an episode since we were at a party on the beach. I was so mad—I thought why doesn’t anybody else care about this.

Bray: I cared. I stayed up with my sister watching it. I was 14 and was not going to a beach party without my junior sister. She and all her friends were watching The O.C. It was before DVR, so if you missed an episode, you had to wait until it came out on DVD. We were all walking on the beach later that night talking about the show and some random girl came up and was like, ‘you watch The O.C.?!’ There’s a picture of us from that night that Brittney’s friend took. We look so awkward.

Brittney: I still have it framed in our house.