The Cherry Hut sells 300 to 400 pies per day in the summer. The record? A tidy 630 pies, sold during a Fourth of July weekend. Nearing 100 years of business, the Northern Michigan restaurant is a local icon.

It’s tough for a new enterprise to make it. According to Fortune magazine, the average lifespan of a business is 10 years. Restaurants are even more problematic. Studies show that up to 90 percent of independent restaurants close during their first year, and 70 percent of those that make it past the first year close their doors in the next three to five years.

So that makes the fact The Cherry Hut is completing its 96th year of operation even more impressive. “I think one of the neatest things is it’s almost 100,” says Christy Case, who with her husband, Andrew, owns and operates the restaurant. “That speaks highly of the business. It’s only had three owners.” 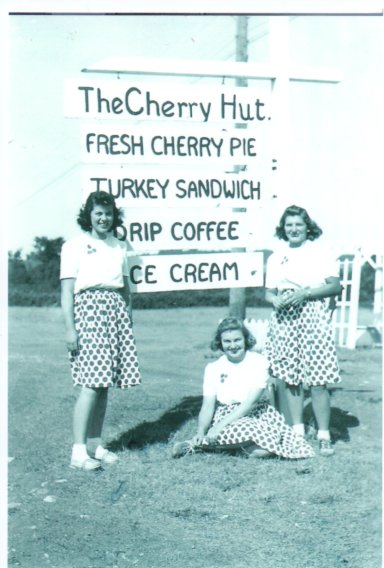 The story began in 1922 when James and Dorothy Kraker opened the original Cherry Hut on the north shore of Crystal Lake as an outlet for products from their orchard. That’s when the smiling face dubbed Cherry Jerry debuted as well, cut into the pie crusts. Cherry Jerry is still there today, as is the restaurant, which was moved to its present location on US 31 in Beulah in 1935 (211 N. Michigan Ave., Beulah).

Christy Case’s father-in-law, Leonard, purchased the restaurant in 1959 after working there since 1946. Andrew Case started overseeing the daily operation after graduating from college in 1999, and two years later Christy began working there when not teaching at Benzie Central. Andrew became a co-owner with his father Leonard and his mother Brenda in 2008. When his father passed away in 2016, Andrew and Christy became the sole owners.

The Cherry Hut also provided the impetus for Pet-Ritz pies. The Krakers’ daughter, Althea, managed the operation during World War II, and after the war married George Petritz. They developed a frozen pie business from Dorothy Kraker’s original recipe while operating The Cherry Hut. When it was sold to Leonard Case, they went on to develop Pet-Ritz pies. George and Althea were also among the original developers of Crystal Mountain, owned and operated today by Chris and Jim MacInnes, their daughter and son-in-law.

Christy says the restaurant’s history provides a connection to the past for both those who work there and guests. Many of the staff return year after year, and some are actually second generation, sometimes working alongside a parent. “Our kitchen manager has worked here 40 years, and a prep cook has been here over 30 years,” Christy says. “This summer a mom and her daughter and son worked here. Another mom and her three daughters did.” They’re among the 60-plus people employed at the 150-seat restaurant every year. 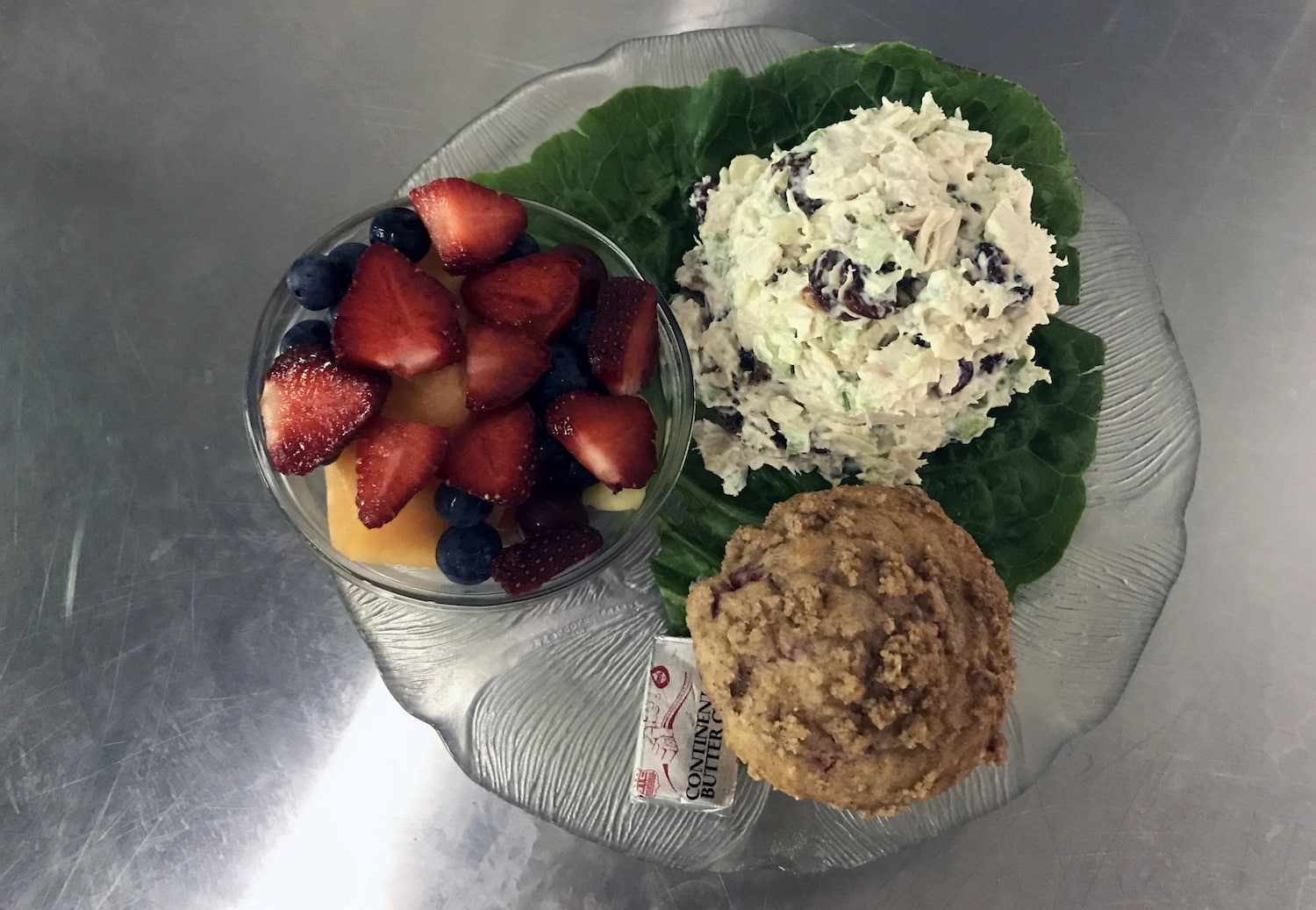 Obviously, a restaurant named The Cherry Hut is going to use Northern Michigan’s famous fruit in a number of ways. Sure enough, there’s cherry BBQ pork, a cherry burger with meat supplied by Pleva’s in Cedar, a cherry hot fudge brownie, and both black cherry frozen yogurt and ice cream on the menu. One of the most popular dishes is the cherry chicken salad. “That’s something my husband (developed) in college,” Christy says. It’s available as a salad or on a croissant.

The restaurant opens for business at 11 a.m. each day, but customers can stop in for to-go baked goods such as croissants, cookies, or cinnamon rolls starting at 9:30 a.m. And pie, especially the pie. Christy says The Cherry Hut sells 300 to 400 pies per day in the summer, though the number drops to 100 to 150 per day in the fall. The record? A tidy 630 pies, sold during a Fourth of July weekend. 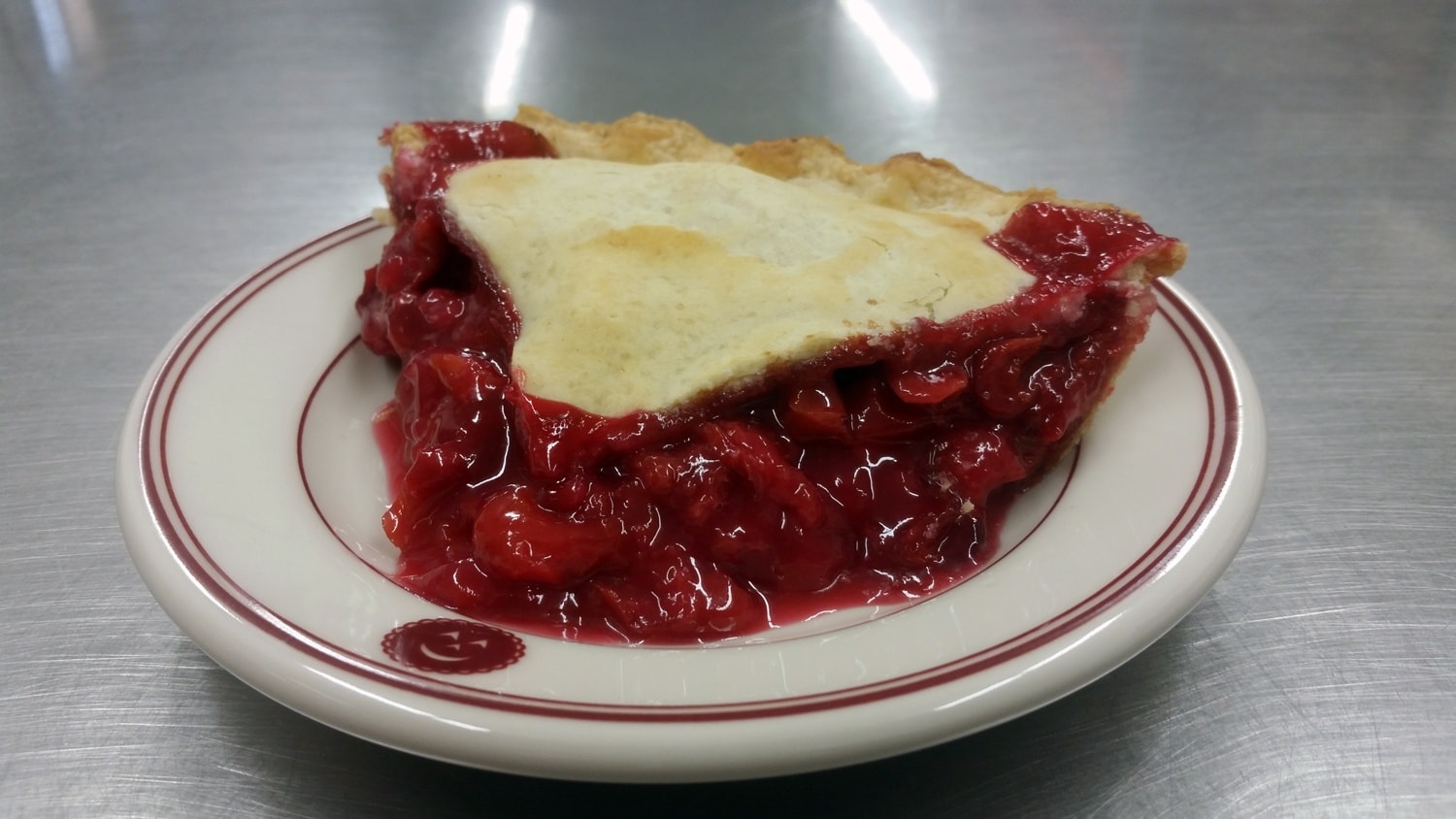 Besides cherry pie and cherryade, The Cherry Hut’s own take on a cherry-juice infused lemonade, Christy says the restaurant is perhaps most famous for its turkey dinner complete with mashed potatoes, vegetables, soup, and even dessert. “It’s freshly roasted. That’s not something people do outside the holidays,” she says.

While the restaurant closes in mid-October, the business doesn’t stop. That’s when the store across from the Benzonia post office springs into action selling various cherry products like jam and jelly (1046 Michigan Ave., Benzonia). That aspect of the business continues to increase, peaking at the holidays.

Christy, who left her job in vocal music education at Benzie Central after 17 years to work fulltime and year-round alongside her husband, says the families the restaurant serves make it all worthwhile. “The best thing is the people you meet on a daily basis, the relationships you build. As we’re a seasonal business, people are so excited when we open. They say, ‘I’ve been waiting all year for the turkey dinner.’ They tell stories like mom and dad used to bring them in, and now they’re here with their kids or grandkids. It’s a real family oriented place.” 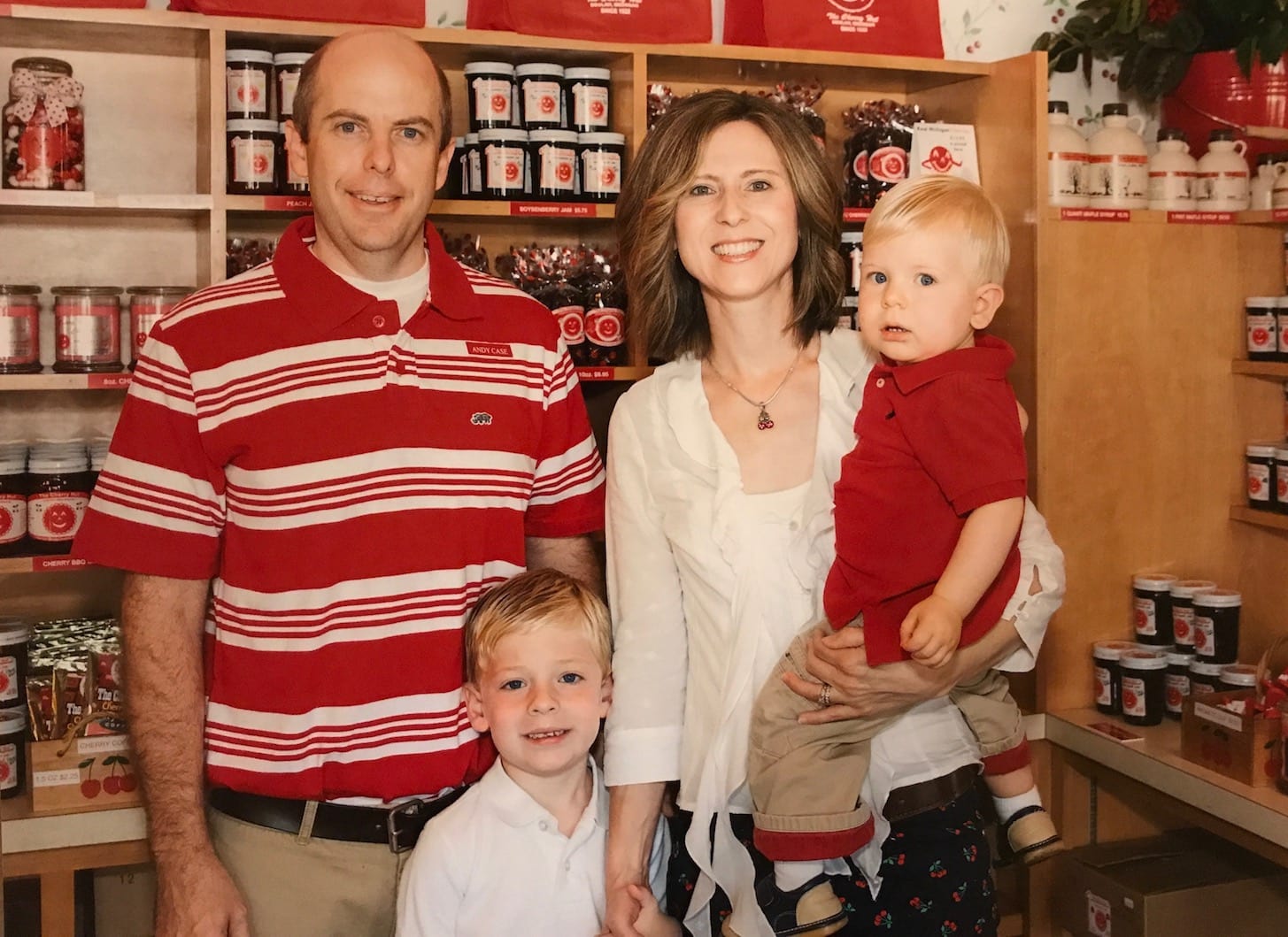