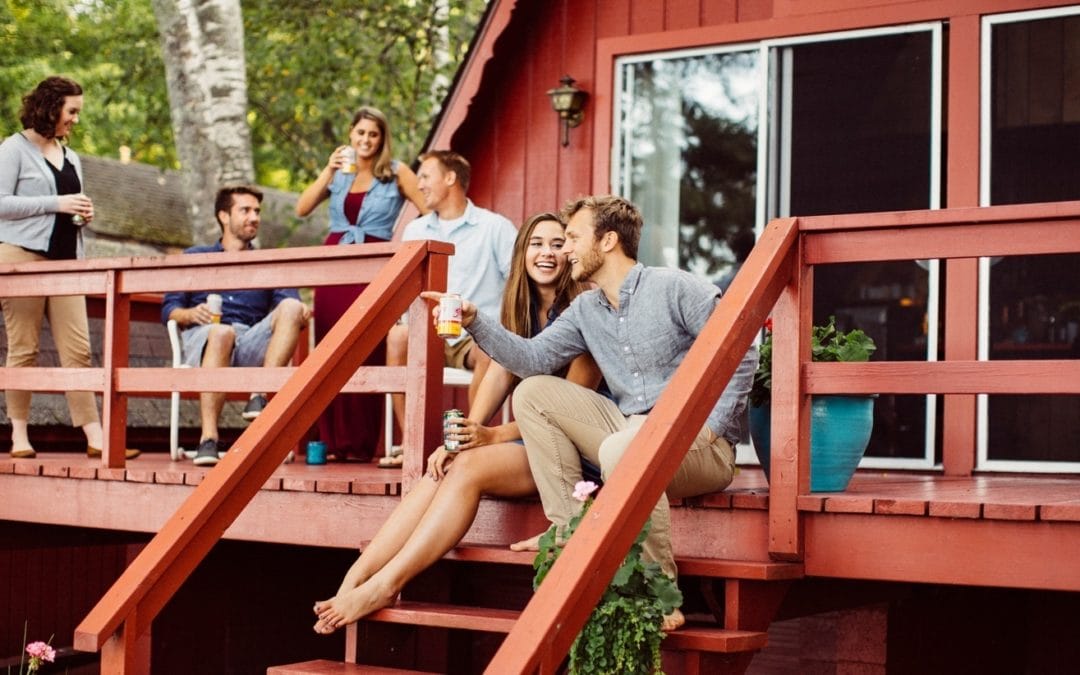 Yep, these retro cabins are now all the rage, but we love ’em for the chill vibe that Northerners have long cherished. Follow us to a sweet A-frame in Northern Michigan, toss in a menu of nostalgic snacks and get ready to relax to the max.

This story is featured in the August 2018 issue of Traverse, Northern Michigan’s Magazine. Get your copy.

Among the treasured memory-shards of my Northern Michigan childhood summers was visiting the new cottage built by my parents’ friends, Jean and Glenn Raymond, on Lake Michigan’s Good Harbor Bay. It was a fabulously soaring A-frame—glass fronted and covered on the interior in rough-sawn lumber. That home is long since gone, but more than a half-century later, I still recall how the soft blue light off Good Harbor Bay poured in through the huge front window, rendering the wood so iridescent it resembled sand.

Even though A-frame structures had been around in this country for decades (mostly in California) by the time the Raymonds built theirs, the architectural style epitomized what the 1960s and 70s were about—i.e., throwing off the boring-stuffy of Post War years to live close to the land. Why build a box when you could build a teepee? 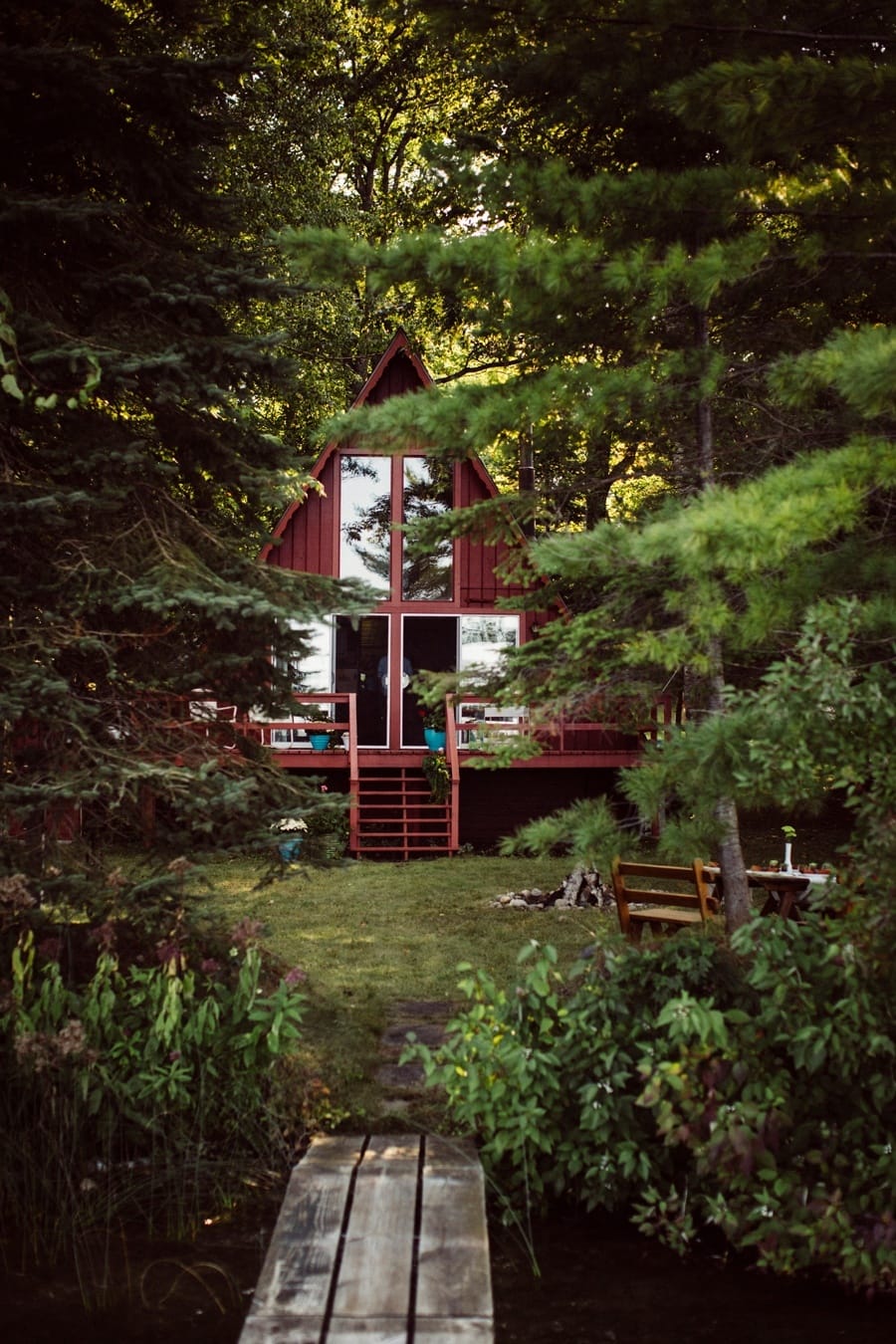 The lifestyle that went along with A-frames was as freeing at their architecture. For one thing, they became synonymous with vacations given that they popped up like morels all over ski country where their steeply pitched roofs easily shed snow. A great design for Northern Michigan winters for sure, but equally as genius for beach cottages since the only view you really need is of the water through the big glass window set into the lakeside of the A.

Needless to say, when Traverse Magazine’s art director Gail Snable’s daughter and son-in-law, Lexie and Chris Cerk, purchased a mint-condition 1976 A-frame on Platte Lake, we couldn’t resist introducing a generation to the wonders of a bygone era. Call it our grandparents’ equivalent of Victorian-era vacationing.

We had the setting. So, what was for dinner? It didn’t take long to zero in on fondue—that European treat that crossed the pond to become the epitome of a cool mid-century dinner party in the states. But check out the cheese fondue recipe we dug up! Remember when pimentos were what jarred roasted peppers are now? We couldn’t resist this recipe that even gives a nod to the Midwest with its cheddar cheese. From there it wasn’t much of a stretch to beef fondue (A-1 and chili sauces for dipping!) and chocolate fondue made from Nestlé chocolate chips with angel food cake to dip. 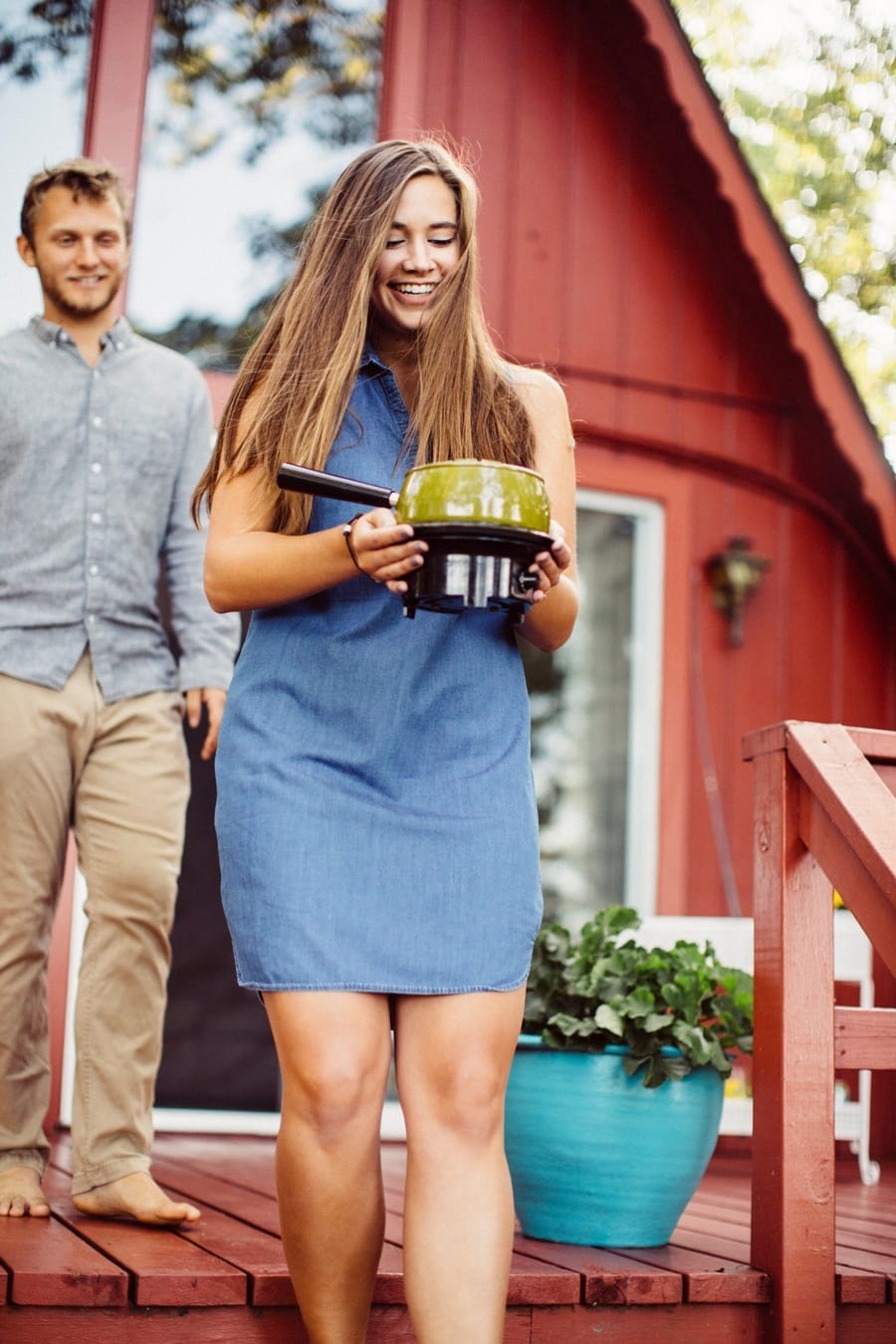 It turned out to be an enchanted evening on Platte Lake— enjoyed by the six friends we tempted with our menu. Beyond commenting on the strange long oval shape of the watermelon (old-fashioned seeded of course), our millennial guests took to the 70s like flower-children to a Volkswagen Bus.

Sure, our dinner was a blast from the past. But evenings like these did happen in Northern Michigan vacation country back in the day. Rent yourself a lakeside A-frame (we love these ones), pack the pimentos, the A-1 sauce and the tiny marshmallows for the fruit salad and take your family back to a groovy time.

Check out our retro menu and recipes below. 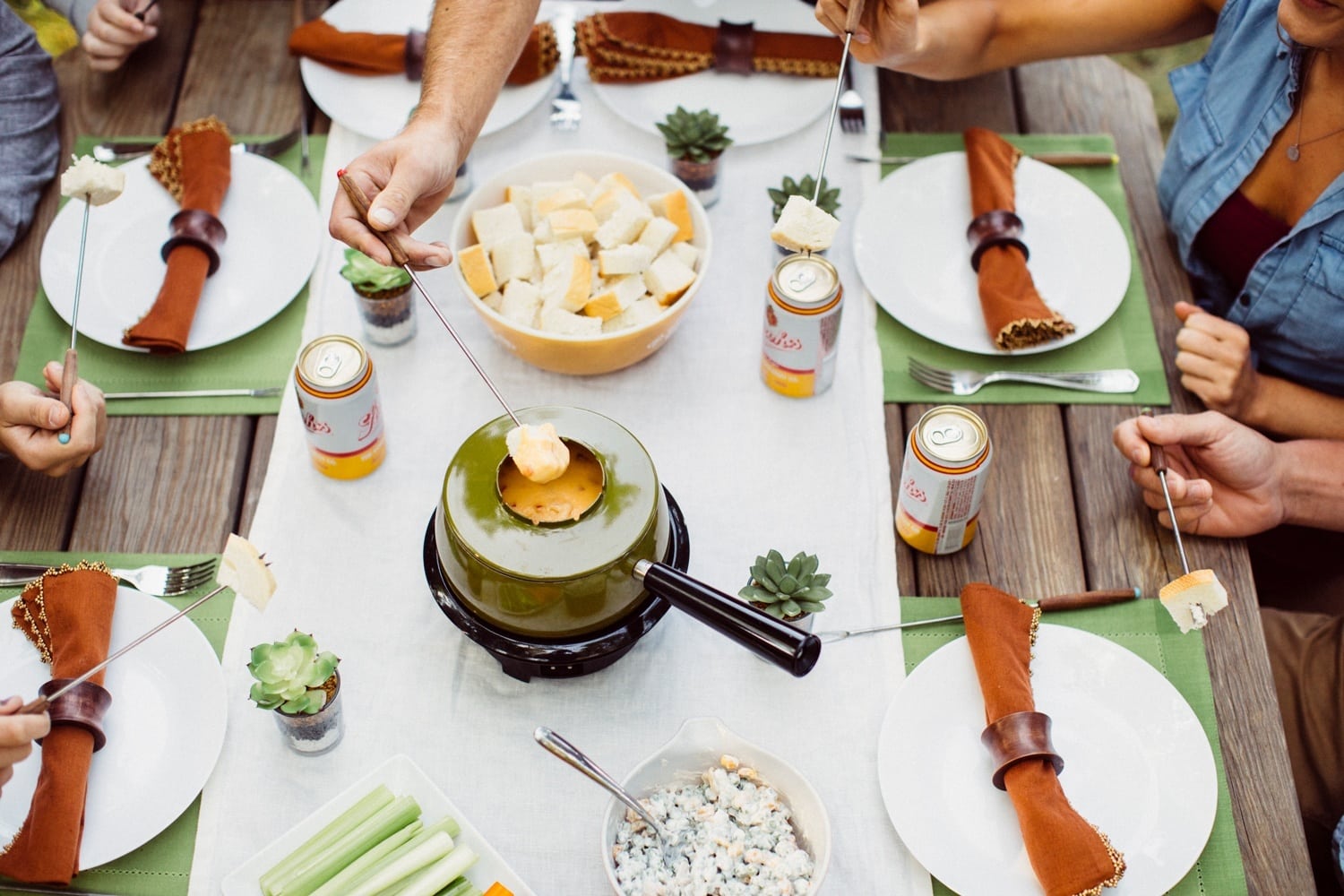 Combine all ingredients in a heavy saucepan, and on low-to-medium heat stir until cheese is thoroughly melted. Transfer to fondue pot when ready to serve. 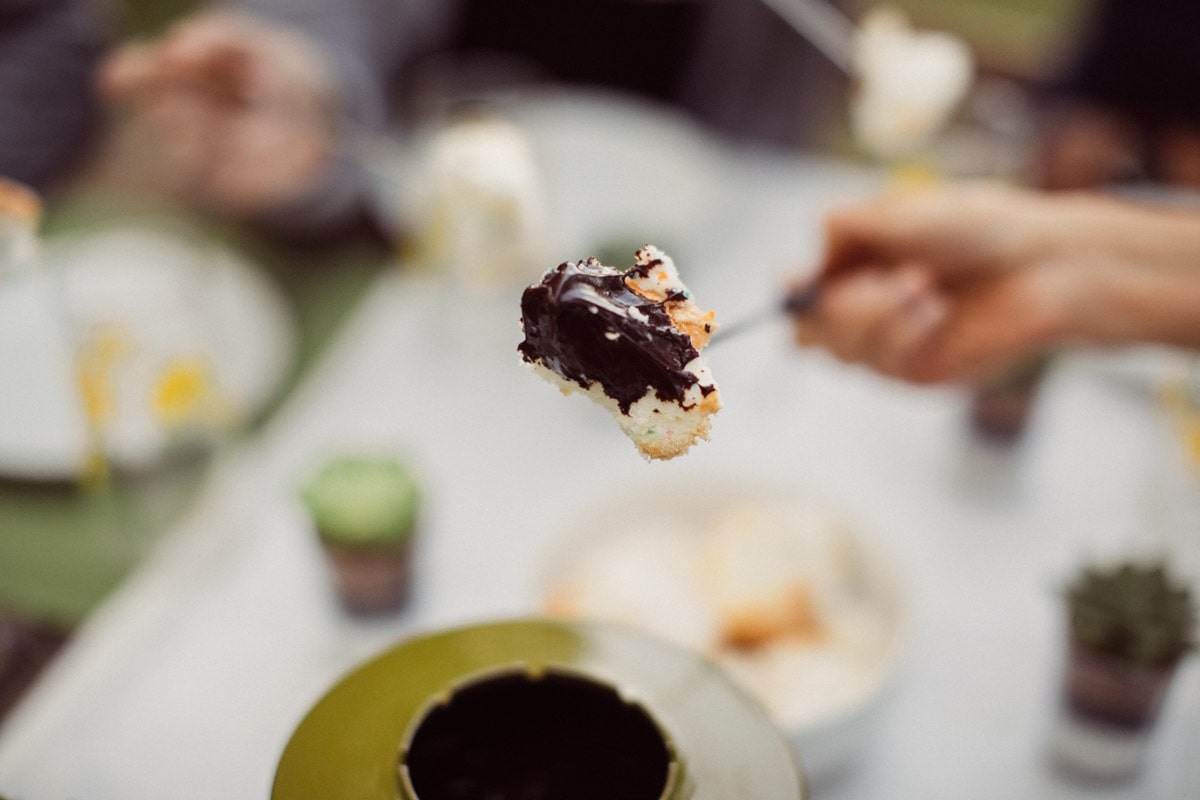 Combine all ingredients except vanilla in a heavy saucepan, and on low-to-medium heat stir until chocolate is thoroughly melted. Use angel food cake cut into chunks for dunking. Yes, it’s okay to use a mix—and especially okay to use the kind that has confetti in it! 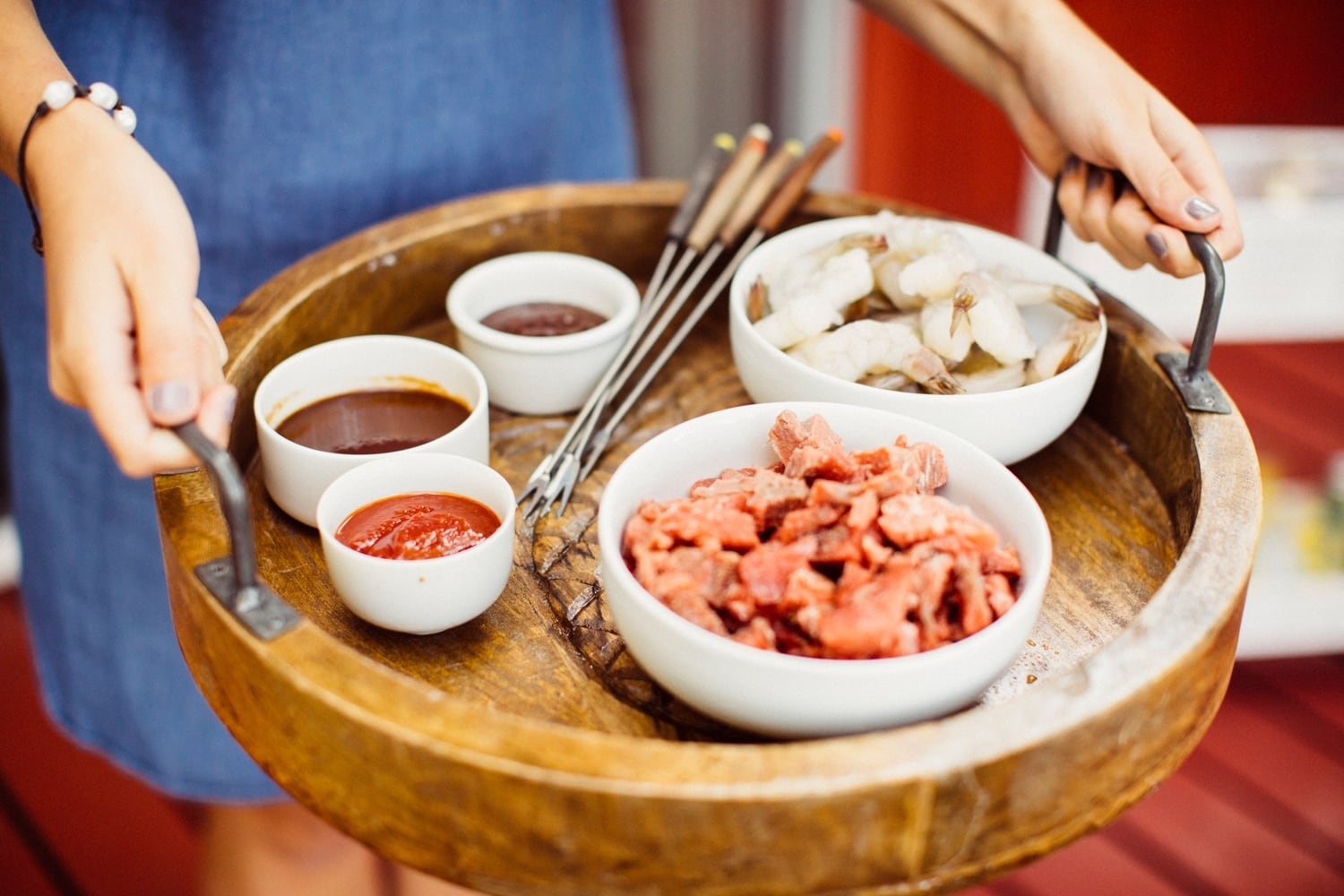 Heat oil until bubbling on the stove. Carefully transfer to fondue pot. Cook cubes of beef in the oil and dip in sauces. 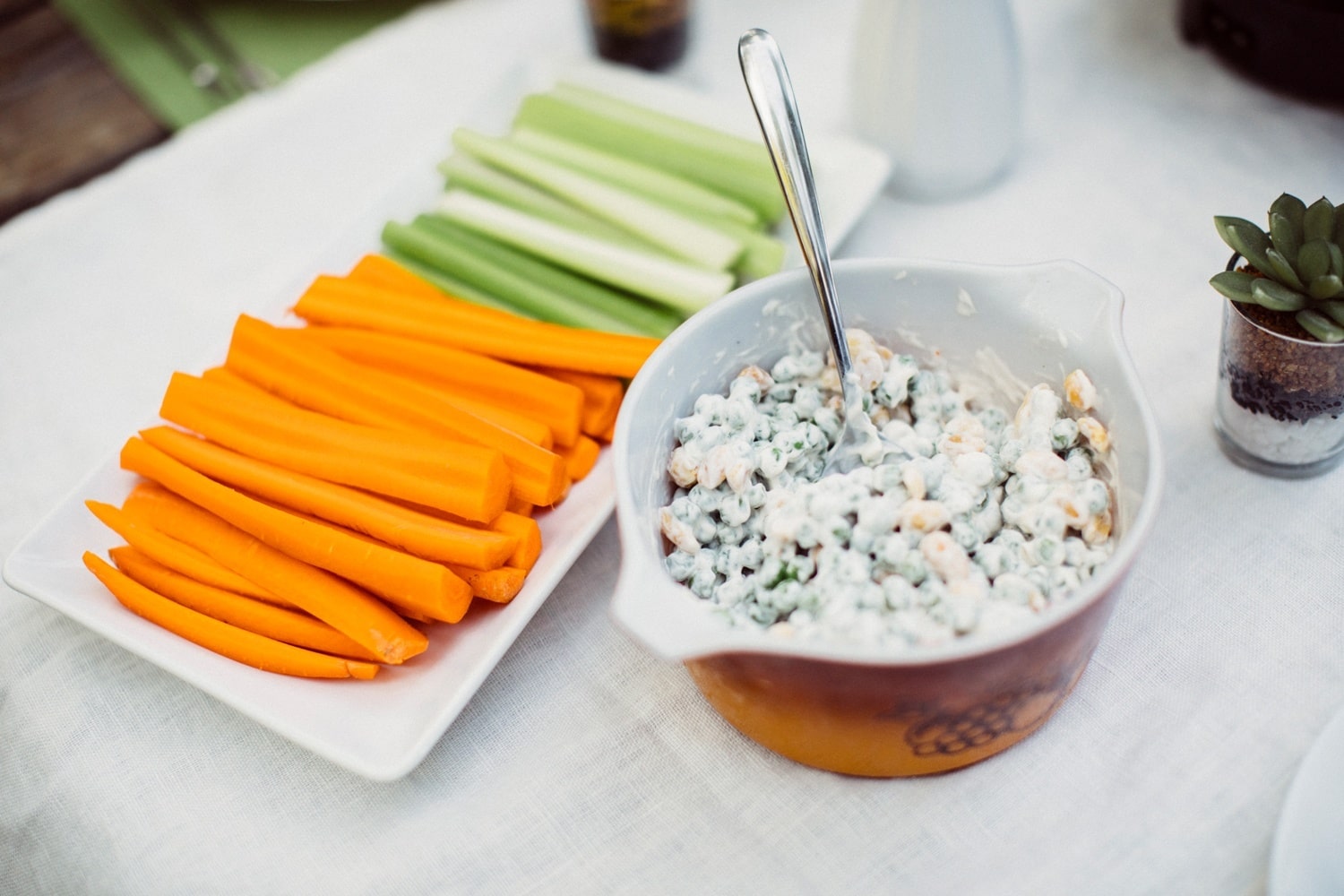 Combine all ingredients but peanuts and peas. Fold in peas and peanuts. Refrigerate at least 3 hours. 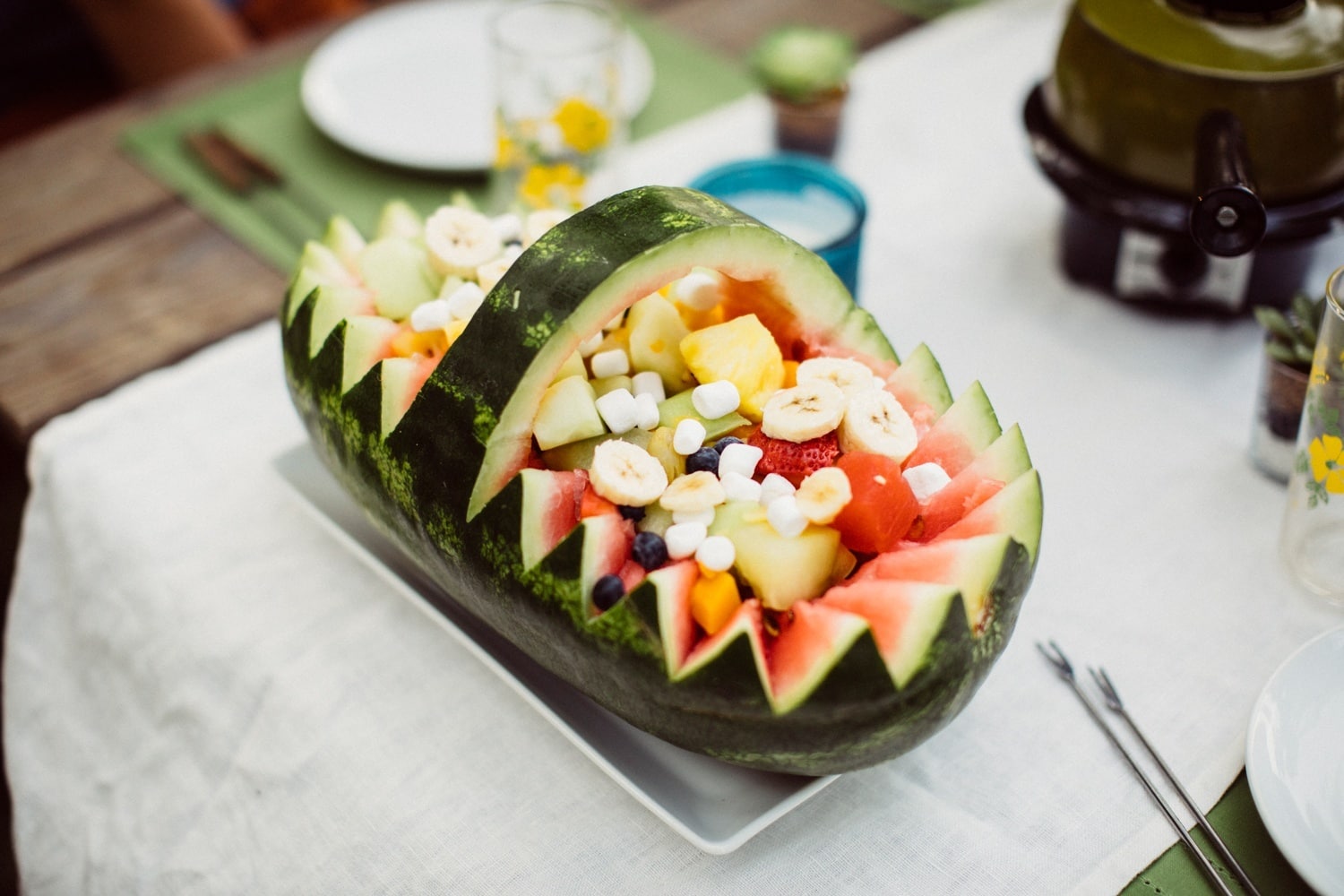 Slice off a small patch of rind so that the melon is stable. Draw a line all the way around the watermelon, length-wise, and about an inch above the middle. Draw a handle—two parallel lines across the top middle of the watermelon that is connected to your other line. With a sharp knife use a saw-tooth pattern to cut the handle and the openings on both sides of your basket. Lift out the cut-out chunks and make melon balls out of it. Also, carefully dig a couple inches of the watermelon meat out of the basket and make melon balls out of them. Try to get as many seeds out as possible—but think of the ones left as an old-fashioned seed spitting contest waiting
to happen.

Combine the watermelon balls with the other fruit and spoon into basket. Sprinkle with mini marshmallows. 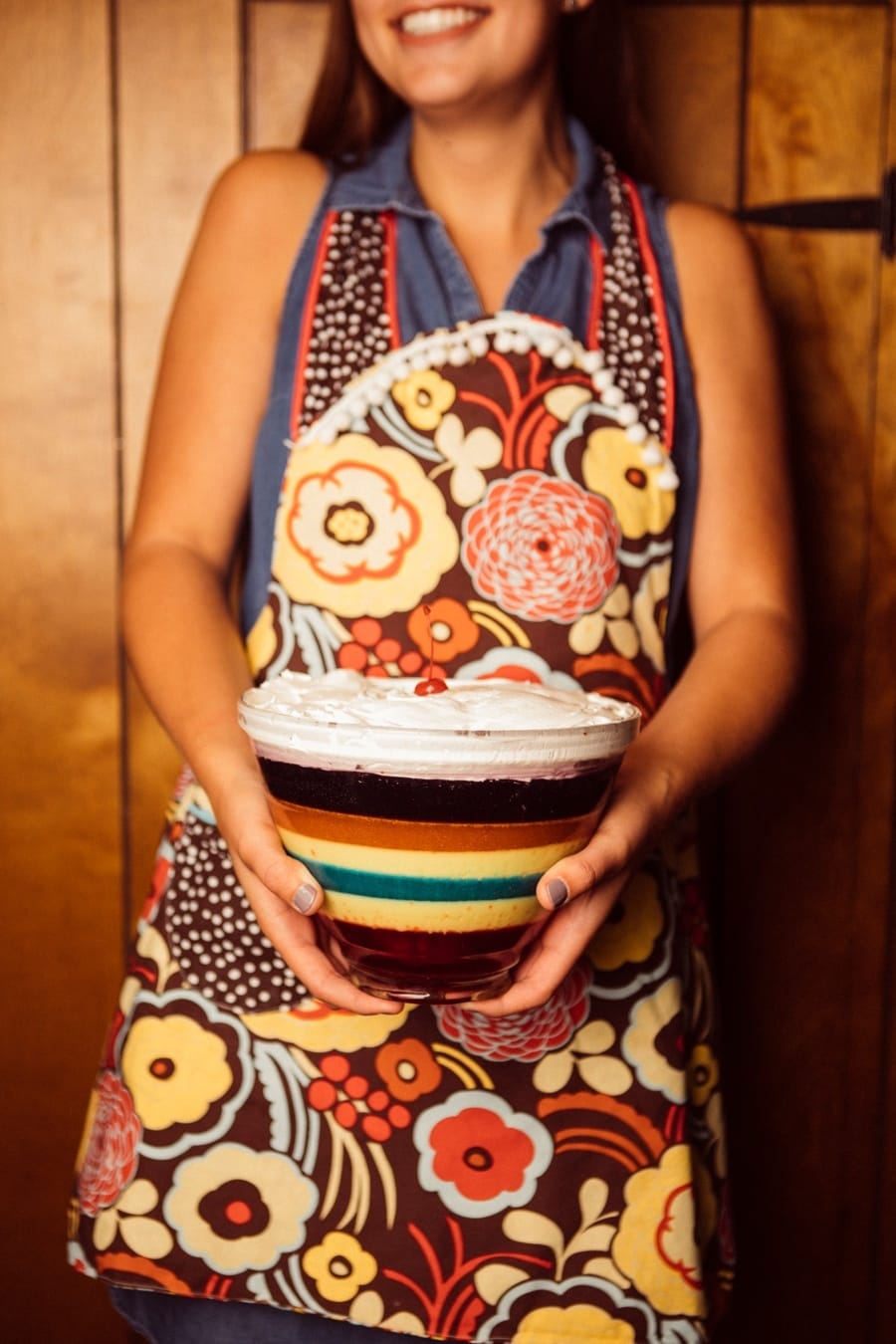 In a small bowl, add 3/4 cup boiling water to one Jell-O package; stir 2 minutes to completely dissolve. Stir in 3/4 cup cold water. Pour into a 3 quart trifle or glass bowl. Refrigerate until just set, about 40 minutes.

In a clean bowl, dissolve another (color) package of Jell-O in 1/2 cup boiling water. Stir in 1/2 cup cold water and 1/2 cup evaporated milk. Spoon over the first layer. Refrigerate until just set. 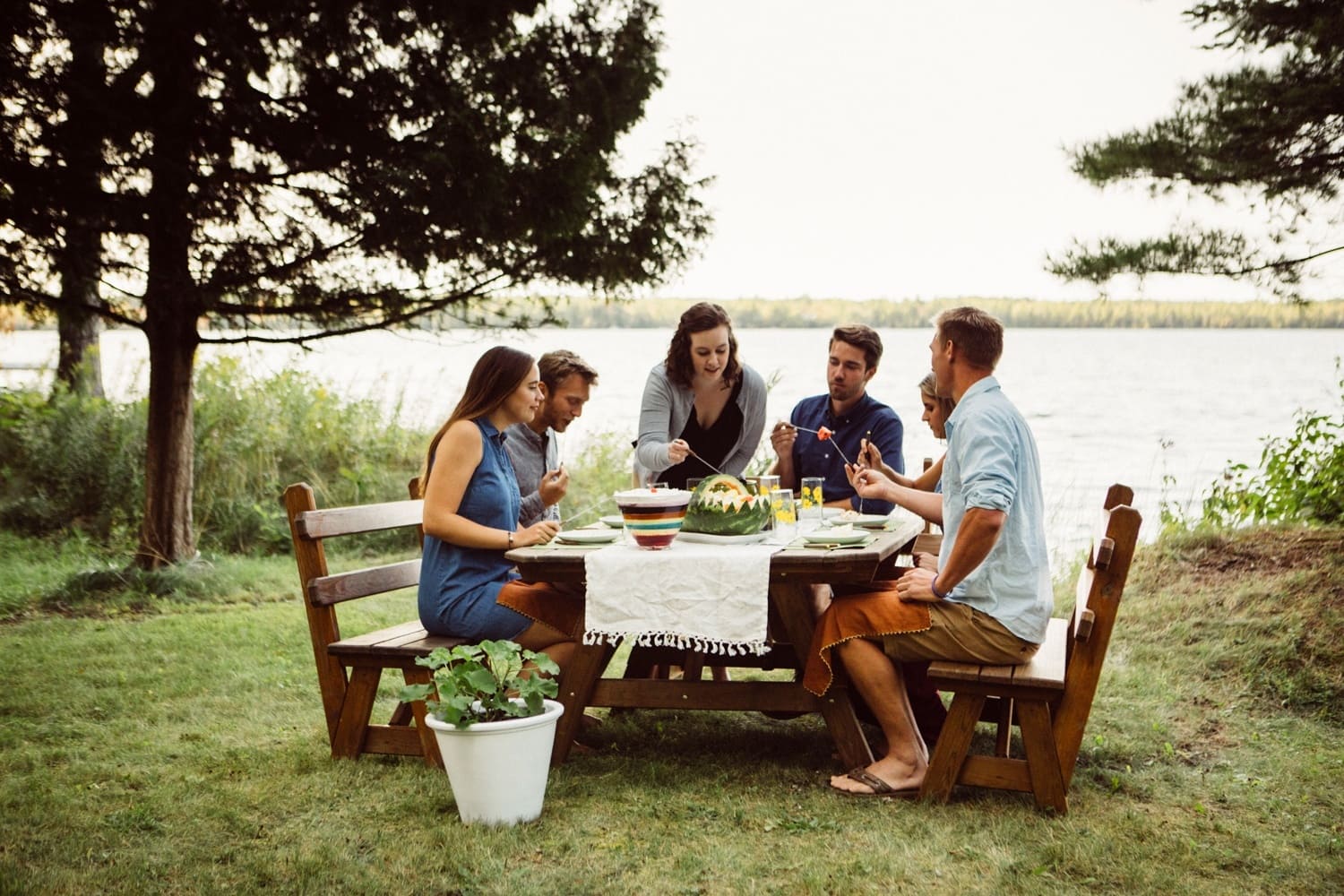